Of the five Armored Warfare classes, the Self-Propelled Gun class is the one with the fewest vehicles and with the changes of Balance 2.0, it has lost much of its earlier prominence – but that doesn’t mean it’s any less important than the other ones.

As their name suggests, Self-Propelled Guns (furthermore referred to as SPGs) are howitzers, installed on a tracked or wheeled chassis. What the name does not imply is, however, the armor part – that came a bit later.

Of all the classes in Armored Warfare, the Self-Propelled Guns have, in their most basic form, the deepest roots in history. The idea to put a gun on a chassis with an engine is as old as cars themselves with the first attempts to build such vehicles (usually consisting of civilian trucks with a gun crudely screwed on top) appearing even before the First World War. It was, however, the Great War that saw such vehicles being actually used on the battlefield for the first time and even though the majority of the artillery of the time still consisted of guns towed by horses, the potential of self-propelled guns did not escape the keen eyes of military strategists. 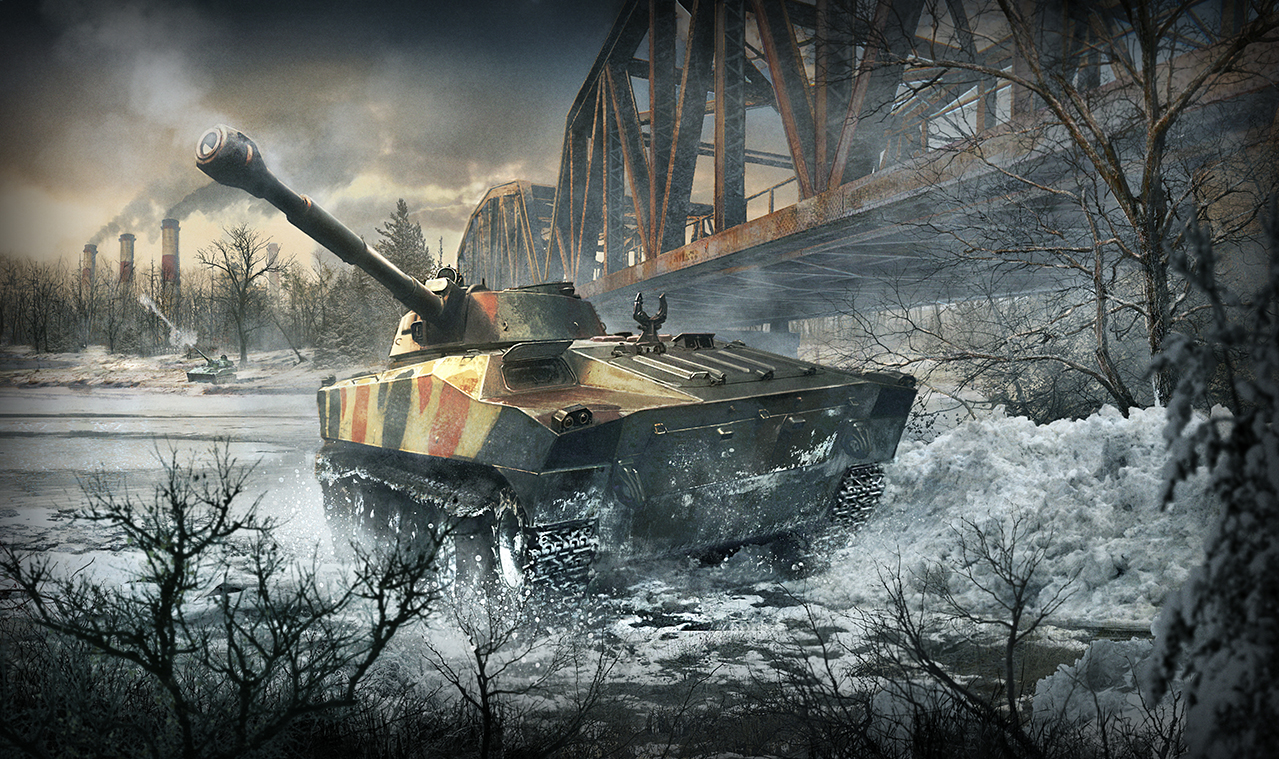 The interwar period saw some limited development of the self-propelled guns, but it was the Second World War that firmly established the importance of the self-propelled guns as the means to provide by now highly mobile armies with fire support. In other words – the tactics had changed since the Great War – where hundreds of massed guns used to pound mostly static lines, the Wehrmacht was now advancing through Europe with pace previously unheard of.

This, of course, provided many challenges to artillery units on both sides – challenges that would take whole books to describe, but to sum it up: modern mobile infantry needed mobile and fairly accurate fire support – that meant providing artillery not only with the means to move around swiftly (in other words, a tracked or wheeled self-propelled chassis), but also with protection. Accurate fire support meant getting closer to the front, which in turn meant that the vehicle was exposed to enemy fire.

In many cases, such fire support vehicles were also used for direct fire support – instead of using the artillery ballistic arc to attack the enemy from above, direct line of sight fire was employed for increased accuracy. This in turn required the vehicles to feature significant armor protection because, unlike the artillery of old, them getting under fire was no longer an option, it was a certainty.

The two biggest proponents of this approach were the Germans and later on the Soviets. The Germans had this kind of self-propelled armored artillery right from the start of the war in the form of the Sturmgeschütz vehicle series. StuG III, which can be considered perhaps the best German armored vehicle of the war when it comes to cost-to-performance ration, was basically a modified medium tank (Panzer III) hull with a casemate on top, housing a forward-firing 75mm cannon (a short version early on, later on the barrel length grew) with limited gun traverse. The gun could also elevate more than a standard tank gun would – as a result, the vehicle was capable of both direct and indirect fire.

Compared to a standard tank, this layout allowed the StuG to carry a bigger gun than the chassis normally would and to function both as an artillery piece and as a tank destroyer. The limited gun traverse was a drawback, but not a fatal one if the vehicle was used correctly – either for shelling the enemy using its excellent gun elevation, or for engaging the enemy at distance. This approach called for reasonably thick frontal armor but the rest of the armor was rather thin, making the weight manageable and the vehicle quite mobile. 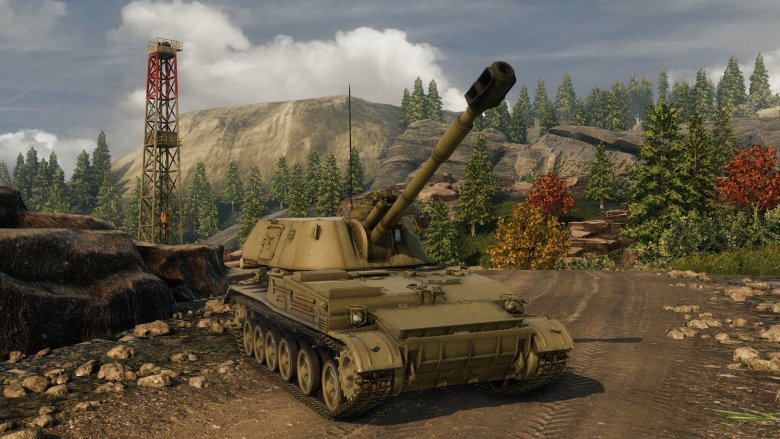 The Soviet counterpart to the StuGs was the Soviet SU (Samokhodnaya Ustanovka) series. The Russians applied roughly the same approach, although there were, of course, doctrinal differences. Generally speaking, Russian self-propelled guns were better armored and heavier with the SU-152 and ISU-152 being the pinnacle of World War Two self-propelled gun engineering (discounting such monsters as the Sturmtiger that only existed in a very limited number and almost no impact on the war). Their thick armor and their massive 152mm guns would earn them the nickname Zveroboy (“beast-killer”) since their giant shells made short work of even the Tiger heavy tanks.

The Americans entered the self-propelled race in earnest but their approach was a bit different. In their eyes, it was the infantry that supported artillery, not vice versa. American self-propelled guns were more suitable for indirect fire and were relatively more vulnerable. A typical example would be the M7 Priest that not only had thin armor, but was also open-topped (making it vulnerable to such things as mortar fire). It wasn’t really a drawback because these were rarely (at least intentionally) used in direct fire role or city fighting. Other (later) American heavy SPGs lacked any protection (including rudimentary gun shields) and it would take another decade or so before this drawback was actually fixed. As for the British, the early wartime British oddities (such as close support tanks firing smoke shells only) were gradually replaced by self-propelled guns of various degrees of quality before ending up with something comparable to the American equipment, only with the U.S. 105mm caliber replaced with the British 25pdr.

After the war, unlike the other classes, the self-propelled gun future was never in question. All major countries realized that the age of towed artillery was over once and for all and the development ran roughly in the same direction – a relatively light self-propelled chassis with traversing turret (for rapid target engagement) and two gun calibers – low and big one that would gradually unify into one from 1970s onwards.

The Russians underwent the same development with the 122mm Gvozdika and the 152mm Akatsiya SPGs making way for the modern Russian 152mm guns like the Koalitsiya. As for Germany, Britain and France, much of their early equipment (especially the French one) came from American stocks. Other, indigenous projects appeared later on (such as the German Panzerhaubitze 2000), but all of them are quite comparable to each other, using the same 155mm NATO standard caliber and being highly accurate.

The evolution of self-propelled artillery continues to this day, of course. Ironically enough, in low-scale conflicts, unarmored truck-borne artillery is experiencing a renaissance due to its affordability, although major military of the world will undoubtedly continue to use armored self-propelled guns for the foreseeable future.

In Armored Warfare, the Self-Propelled Guns are the only class that is mode-restricted. They can be used only in PvE mode. They have the following characteristics:

The ability to use indirect fire is unique to this class. By pressing Shift, a SPG operator can switch to a “satellite” overhead view that can be used to target enemies practically anywhere on the map – since the SPG gun fires using a very high angle, the shells are able to travel over many obstacles, falling on enemy vehicles from above. Although this may sound like a major advantage over any other class, the SPGs do have a number of restrictions and limitations. 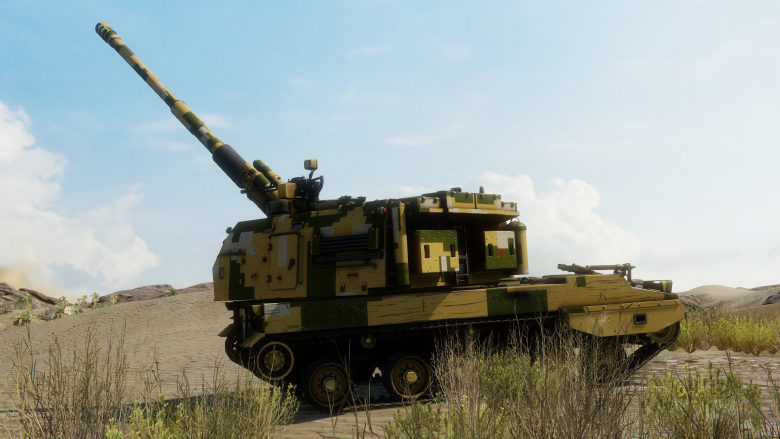 For one, such indirect fire is not accurate. SPGs damage their targets in many cases by the shockwaves and fragments of their shells exploding near the targets (often referred to by players as “splash”) – in fact, most artillery can only fire HE shells. Top armor of even the heaviest tanks is often very thin, which means that a direct hit even with a low-penetration HE shell is absolutely devastating, but such direct hits are rarely achieved. Another factor is the shell travel time – HE shells are generally quite slow and the further the vehicle is from the frontline, the longer they travel to their targets. This makes it very difficult to hit fast and moving targets – focusing on stationary or slow targets such as MBTs is advised.

The shell travel arc, while steeper than for direct fire guns, also has its limits – some tall obstacles like rocks or buildings are impossible to fire over, making self-propelled guns very difficult to use in cities or areas with lots of buildings in general.

And last but not least, in Armored Warfare, the indirect fire ability is balanced by the SPGs being very vulnerable at close range – they are sluggish and have very thin armor, making close range combat a risky tactic bordering on suicide. At close or medium range, a SPG will be outmaneuvered by any other vehicle in the game and has to rely on its range to survive under all circumstances.

There is currently a single line of SPGs present in the game, consisting of a mix of vehicles from all countries. They are all quite unique thanks to their low number, although, very roughly speaking, there are two types of SPGs:

Rapid-fire SPGs, as the category suggests, fire shells faster than standard SPGs, but with less accuracy. They can fire in salvos – similar to the “clip” system of some autocannons in the game, these have a magazine of several rounds (typically three) that can be fired in quick succession, followed by a longer “magazine” reload time. These include:

Accurate SPGs on the other hand have a longer but constant reload time and are generally more accurate than their rapid-fire counterparts. These are the rest of the SPGs:

The last vehicle is unique even amongst SPGs, as it is in fact a wheeled platform. That makes it very fast compared to the tracked SPGs, but it is still quite vulnerable. 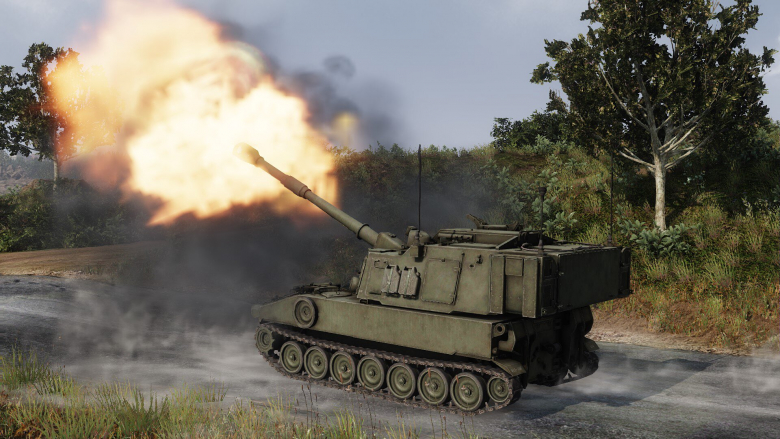 SPGs in Armored Warfare are suitable for players who prefer relaxing PvE gameplay. Hunting down AI-controlled vehicles can be as much or more fun for many players who are not looking for a hardcore, competitive experience and prefer relaxation instead. On higher difficulty levels, achieving good results with a SPG can be a challenge, but if you prefer to simply spend 5-7 minutes by supporting your team mates and occasionally even stopping a particularly annoying enemy wave by yourself and earning the gratitude of your team-mates, the Self-Propelled Guns class is just the right thing for you.