In the last part of our Developer Diary series, we took a look at the Main Battle Tanks and their role in Armored Warfare. Today, we’ll discuss another hotly debated class – the Armored Fighting Vehicles.

This makes the class name arbitrary to a degree, but then again, so are the real life vehicle designations in many cases. In Armored Warfare, the only classes that are clearly defined based on their real life role are the Main Battle Tanks and the Self-Propelled Guns (that consist of vehicles designed primarily with indirect fire in mind), while the Light Tanks, Tank Destroyers and Armored Fighting Vehicles are in some cases interchangeable.

Let us therefore not burden ourselves with the chaos of real life nomenclatures and simply say that the AFVs are, generally speaking, the lightest vehicles of Armored Warfare with their weight rarely exceeding 20 tons. The protection levels reflect this fact – while some AFVs do in fact have some advanced countermeasures, they are the least protected vehicles in the game. They are commonly armed either with an autocannon or a combination of autocannon and guided missiles.

To compensate for the lack of main caliber weaponry and armor, the AFVs are fast – the lightest AFVs such as the CRAB are also the fastest and best accelerating vehicles in the game. This makes them very hard to hit, but their true strength lies in their ability to hide.

The AFVs are not just light, they are in many cases also small and the smaller a vehicle gets, the harder it is to detect. The AFVs are exceptionally good at staying hidden while seeing the enemy thanks to their advanced electronics and optics – they have the best viewrange of all classes in the game. This is called scouting or spotting. You can read more about the spotting tactics in the AFV Battlefield Role part of this article and in our recent developer diary.

The Armored Fighting Vehicles have a special ability that can be activated by pressing the E key called Designate Target. When activated, the target under your aim reticle becomes designated for you and other friendly players on the battlefield for a short period of time. Designated targets are unable to hide and will remain spotted. Designated targets also take additional damage when fired at. This ability can be used to single out the most dangerous opponents on the battlefield to allow your teammates to destroy them.

There are two basic ways of classifying the AFV class. For starters, it can be split into:

While self-explanatory, this classification doesn’t tell much about the vehicles themselves save for some of their mobility aspects. Wheeled vehicles are much faster on hard surfaces such as roads, while tracked vehicles are not as fast in general, but are considerably faster and more mobile off-road, especially in the roughest terrain. There are, however, some exceptionally fast tracked vehicles as well as some wheeled vehicles that are not as fast or nimble as their tracked counterparts. It is therefore better to focus on their role on the battlefield instead of their means of mobility. Based on their roles, the AFVs can be split into:

Several small and agile vehicles – most notably the Wiesel family – was moved from the AFV class to the Tank Destroyer class in Update 0.19 to better reflect their nature.

Light AFVs are, hands down, the best scouts in the game. Whether staying hidden behind a bush and observing enemy vehicles at distance or using their high speed and maneuverability to quickly spot the enemies and disappearing behind an obstacle before they have a chance to react, the light AFVs are the ultimate eyes and ears of each team. No vehicles are as good at this and a single capable scout can turn the tide of battle in your favor, especially if the enemy team lacks an equally skilled spotter.

Their mobility is also second to none with nearly instant acceleration – some of the wheeled vehicles might be a bit difficult to control due to all that speed but once you get the hang of it, you’ll be taking turns as if there was a fresh batch of tofu in your trunk waiting to be delivered. The most important part, however, is to be aware of your environment – being stopped by running into an obstacle in the middle of a dogfight will surely lead to your quick demise.

However, there’s a price to all this speed and influence. The Light AFVs are, hands down, the most fragile vehicles in the game and even a single hit from anything bigger than an autocannon can deal massive damage, immobilizing you, killing the crew or destroying multiple modules. High Explosive shell hits are especially devastating since their explosive splash makes it much easier to immobilize an AFV by destroying its wheels or tracks. A static and spotted AFV is a dead AFV – this is especially important for players who prefer to stay hidden rather than run around the battlefield. It is crucial to immediately relocate when spotted, as everyone and their grandmother will instantly target you as an easy kill.

Regardless of what weapons systems they use, the Light AFV firepower is also quite low and their fire support ability will always be inferior to other classes. AFVs armed with guided missiles can take out a MBT with some luck and careful aiming but their autocannons are only useful against other light and unarmored targets. If attempting to score some kills, missile-carriers like the VBL should therefore stay away from the front line. Vehicles relying on autocannons should, on the other hand, close in and take out their targets by firing at exposed enemy flanks.

If you prefer a combination of stealth and speed, like to silently wait in hiding, to mark your enemies and drive them mad by the fact they can’t see you and you like to have a lot of influence on the flow of battle, the light Armored Fighting Vehicles are the best class for you. Be warned though – they are possibly the most difficult vehicles to play in all of Armored Warfare. Mastering them requires not only solid knowledge of game mechanics, but also careful planning and the ability to read the battlefield.

These vehicles generally consist of eight-wheeled and tracked IFVs. Examples include:

With the OA-82 Jarmila II and OT-64 COBRA coming in Update 0.22. Previously, the heavy AFVs also include the Terminator vehicle family, but they were moved to the Tank Destroyer class since that’s what they are used the most on the battlefield. 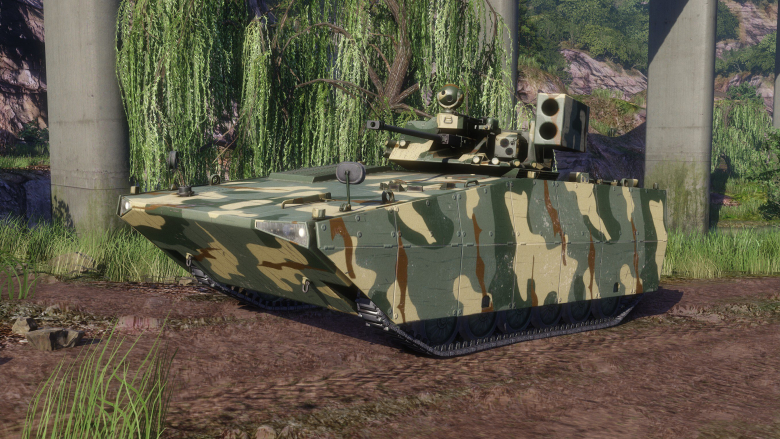 Heavy IFVs lie in their role somewhere between the Light AFVs and the Light Tanks. On the scale of mobility, they are second only to the Light AFVs, especially on hard surfaces, with the scale itself looking roughly as such (from the highest mobility class to the lowest):

The armament systems are generally identical to the Light AFV class but are better stabilized (increased accuracy on the move) or can fire faster. Heavy AFVs are also larger and have more hitpoints with some of the vehicles featuring quite solid protection, rivaling that of the Light Tanks – for example, the Bradley and the BMP-3 both carry an ERA kit. The Bradley can also equip a soft-kill APS, while the Warrior carries relatively thick additional armor plating in the form of the TES(H) kit. This armor, however, should not be generally relied upon as main caliber weapons and guided missiles will penetrate it quite easily.