The outcome of a battle depends not just on vehicle statistics and crew skills, but also on the choice of battle location. Armored Warfare promises to pleasantly surprise you with its wide range of locations where battles take place. There are city streets and hot deserts, dark swamps and sunny steppes, highways among skyscrapers and villages with dirt roads. Today we want to draw your attention to a completely new, unannounced location that realistically represents the unpredictability and variety of winter weather.

As you can see, battling on the Cold Strike map drives home that winter is not just a wonderland with brilliant white fields, but also can have blizzards, decreased visibility and muddy roads all of which will make your battle much less than a walk in the park.

Fighting in the snow can be visually stunning: against a backdrop of white scenery, shots and explosions look especially bright. Vehicles leave tracks behind and their dark silhouettes can become a perfect target for the enemy. Lakes are covered in a layer of ice and roads turn into a slushy, dirty mess.

The city in the Cold Strike map appears to have been literally frozen in time amid a large-scale attack, with deserted streets and abandoned homes. Helicopters and fighter craft buzz through the skies, and the wet winter weather creates a chilling atmosphere – a leaden sky blends in with grey houses and dirty streets, and the fog hanging over the city turns enemies into barely discernible ghosts on the horizon. 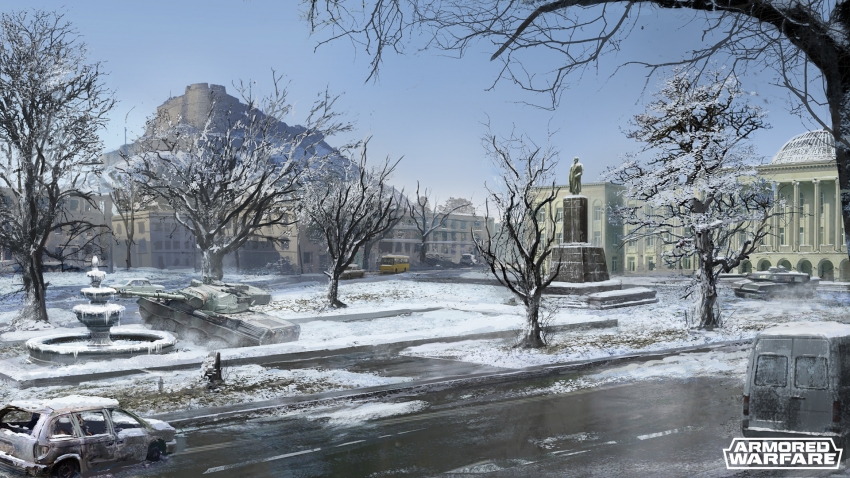 The area where you’ll be doing battle is an urban district and its surroundings, with a highway, a train station and warehouses. The map is about 1.2 square kilometers in size.

To the south there is a bus stop with a station building and police station. A frozen river crosses through a large part of the map.

Teams begin each battle in either the North-West or South-East of the map. Generally, the center of the conflict will be an area where the city’s suburbs and a snowy wasteland meet, which is convenient for fast vehicles and artillery. Tank crews will need to consider their tactics carefully, since the environment is not ideal for heavier armored vehicles and tanks. 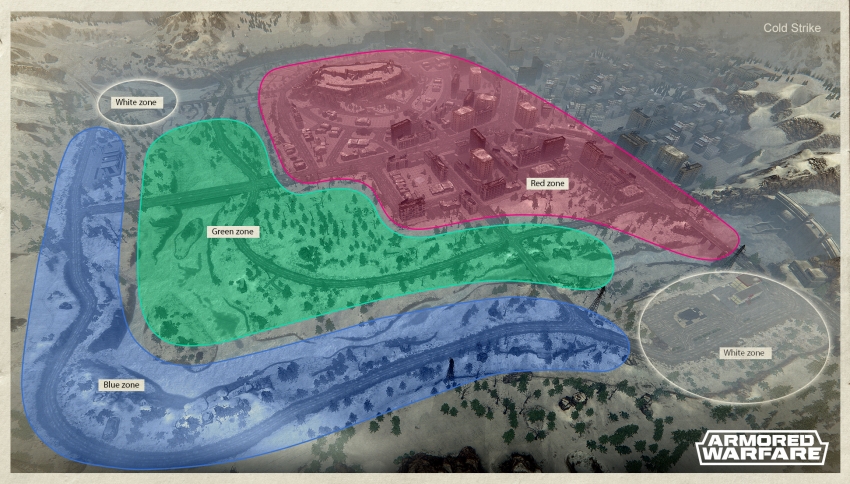 White Zone – These are the drop-off points for teams. To the north is a field camp with warehouses and cargo containers, and to the south is a bus station. You’ll have to select your route through the map starting here.

Green Zone – This is the area that encompasses the most direct route to the enemy base. In order to cross this deadly valley, you’ll need a quick and easily maneuverable vehicle, since the terrain is wide open, and enemy fire can come from all sides. In addition, it’s easy pickings for artillery, so you’ll have to avoid their fire as well.

Blue Zone – A longer, but safer route to the enemy base. The highway is here, allowing rapid movement for wheeled vehicles and light tanks. Scouts can use this route to gather information about the location of enemy artillery. Vehicles can also take up positions to shell the city from this area, using vegetation as cover.

Red Zone – These city streets will see the bulk of main battle tank conflict. Heavy tanks can rely on their strengths without concern for artillery fire. Narrow city streets help to limit the enemy’s options and their ability to organize counterattacks. Even for weaker fighting vehicles, the territory provides additional cover to compensate for low armor.

‹ The River Point Map up The Ghost Fields Map ›
Share