Vehicles in Armored Warfare are manned by crew members and commanders. The amount of crew members can vary from as few as two to four, depending on the vehicle.

The Commander is a special crew member that progresses differently than the rest of the crew. Unlike the regular crew members, the commander can move from tank to tank and has a specific tree development system in place. You can choose from multiple commanders, each with a different progression tree and different skills available. Some commanders are suited for specific classes of vehicles (with their skills reflecting that), while other commanders are more universal.

In Armored Warfare, apart from being available directly in the Garage for every vehicle in the Commander and Crew section of the main screen, your commanders can be managed using the new Barracks Garage window. 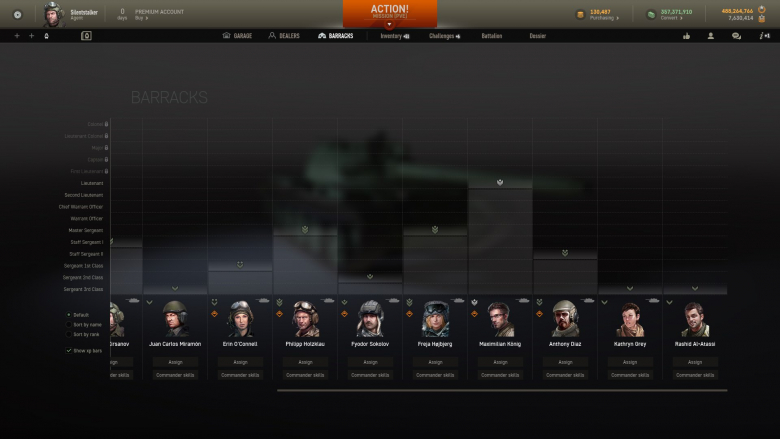 Here, all available commanders are laid out next to each other with the bars showing their progression through the ranks. There are 15 commander ranks in the game, ranging from Sergeant Third Class to Colonel – earlier, there were only 5 and the conversion described in a separate section of this Developer Diary.

Commander ranks are gained by collecting Commander Experience (furthermore referred to as Commander XP), which in turn can be gathered by playing vehicles equipped with the specific commanders. The more you play with a commander, the more experienced he or she becomes. The progression speed is roughly equal to vehicle progression and the amount of Commander XP obtained is equal to the standard Experience obtained from battle, including bonuses such as Premium Time.

Each Rank (often referred to as “level”) comes with a skill point. Skill points can be invested on each commander’s detailed screen into additional bonuses called Skills. Let’s take a look at them a bit closer before we explain the details of the new progression system.

Skills are organized into Skill Fields of various shapes and sizes. Basic commanders like Viktor Kirsanov usually have just a simple square, while more advanced commanders, like Kathryn Grey, have more elaborate shapes woven into the Skill Field. The basic principle of skill point assignment is that players can only assign these to skills that are adjacent to those already unlocked. Additionally, this progression is only possible horizontally or vertically, not diagonally. In other words, if you have a skill unlocked, you can unlock another skill that’s to the left from the already unlocked one, to the right, below or above. 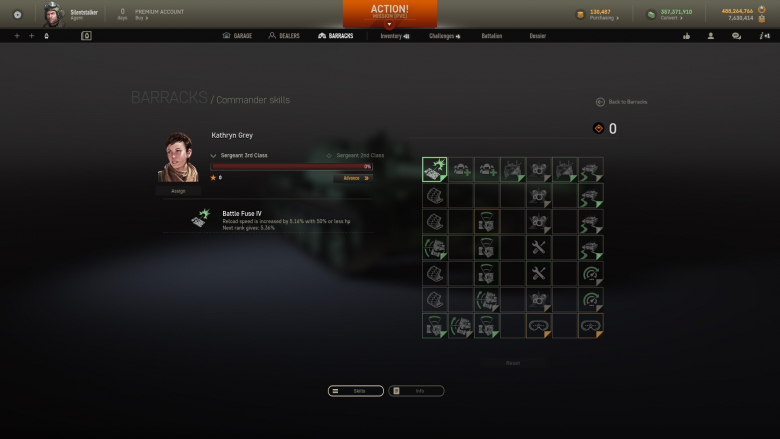 The starting point for each commander is called Basic Skill, while the rest of the Skill Field space is occupied by either skill slots or empty spaces. The goal is to configure your skills by making a path through the field the way you find best for your play style.

Basic Skill is the initial progression point each commander has. It does not have to be unlocked and becomes more powerful with each rank the commander achieves.

Skills are represented by rectangular icons on the Skill Field. They offer a wide variety of bonuses, some of them being unique to a specific commander. The skills define the style of each commander – Philipp Holzklau is, for example, a commander very suitable for Main Battle Tanks and his skills reflect this fact, focusing on repair speed, crew resilience and other bonuses useful to MBTs.

There are three quality tiers of skills:

When choosing which skill to unlock, their quality often plays a major role – is it better to unlock two smaller skills you need, or focus on spending the skill points to get to the desired Tier 3 skill as fast as possible? The decision is yours, commander. Please note, however, that not all commanders have the skills of all tiers – some introductory commanders such as Philipp Holzklau only have Tier 1 and Tier 2 skills, but they have more of them.

Choosing which skills are the most beneficial for you is a part of the commander configuration – some conditional skills, for example those that activate with damage taken, are extremely useful for players who prefer aggressive play style.

Please note that a commander can have more fields with identical skills in his Skill Field:

The last type of skill fields is empty fields – those often lie in the quickest path to the best (Tier 3) skills. As their name suggests, they can be unlocked but they do not offer any bonuses. It’s your choice whether to take the longer path leading over lesser skills, or take the quick path to the desired Tier 3 skill.

Apart from the Skill Field, other commander options are also available on the Commander Screen. 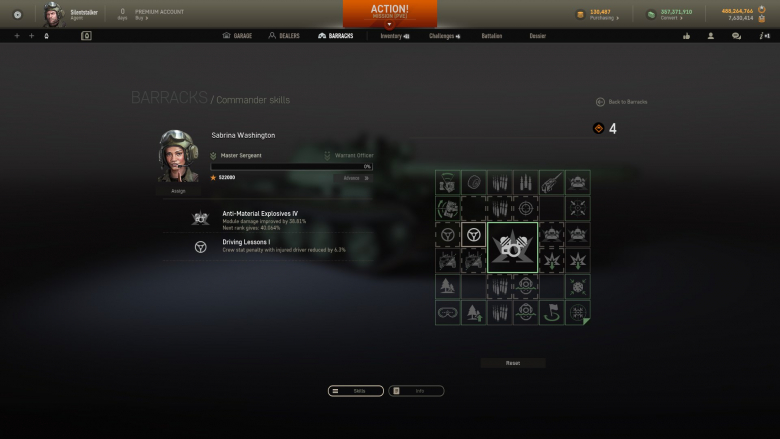 These include, from above:

Please note that commander progress can be reset at any time – fixing a wrong Skill selection is just one click away.

As we mentioned already, the Commanders in Armored Warfare progress by accumulating Commander XP from battles. Commanders start with the first rank (Third Sergeant) and there are 15 ranks in total (all the way up to Colonel).

The rank promotion is not automatic – when a commander gathers enough XP, he has to be manually promoted in his Commander window. Until Rank 10 (Lieutenant), all commanders can progress independently –after gathering enough XP for the next rank (either by playing or converting Reputation to Commander XP), you simply can promote each commander rank by rank.

When they reach Rank 10, however, a new system called Chain of Command Progression comes into play. Contrary to the belief of some people, a chain of command is not the chain soldiers get beaten with to know who’s in command.

Very simply put – by the time you reach Rank 10, you should select your “main” commander you want to reach Rank 15 with. Just like in the army, not everyone can be a colonel – a chain of command of your Private Military Company has to be forged.

What this means is that while all your commanders can reach the rank of Lieutenant (Rank 10), you cannot progress through the following five ranks while leaving a certain rank empty.

In practice, what this means, in order to have one of your commanders as a Colonel (top Rank, Rank 15), you have to have:

In other words, to obtain one Rank 15 commander, what you need is to do this:

As long as this chain of command is kept, commanders can progress – you can of course assemble the abovementioned command structure in any order you want, as long as the ranks follow one another. You can for example:

And so on. The choice is, once again, yours.

Please note that achieving a Rank 15 commander is not a mandatory task – Rank 10 commanders are considered to be very powerful indeed. Rather than a must-have, it is a long-term goal that will give you an extra edge on the battlefield.

Unlike the commander, crew members cannot be moved around and are tied to the vehicle they were recruited for. The crew also has a progression system - regular crew members can choose from a range of available skills depending on the experience they have gained in combat.

The skills available to each crew member depend on their specialization and reflect the role of that respective crew member - a driver can thus learn a skill allowing him to turn the vehicle slightly faster and the gunner can learn a skill to fire even more accurately. Additionally, basic crew properties improve with experience so a gunner, for example, will become more accurate in time even without selecting special skills

Some vehicles have only two crew members – the loader is missing because the vehicle has an automatic loading mechanism (typical for rapid-fire automatic cannons, unmanned turret vehicles and Russian Main Battle Tanks). While other vehicles (specifically of the Self-Propelled Gun class) can have four crew members (two loaders).

Crew members can be customized – players can select what they look like, (from the portraits listed – both men and women are available), their names and surnames (both from a list of allowed names). 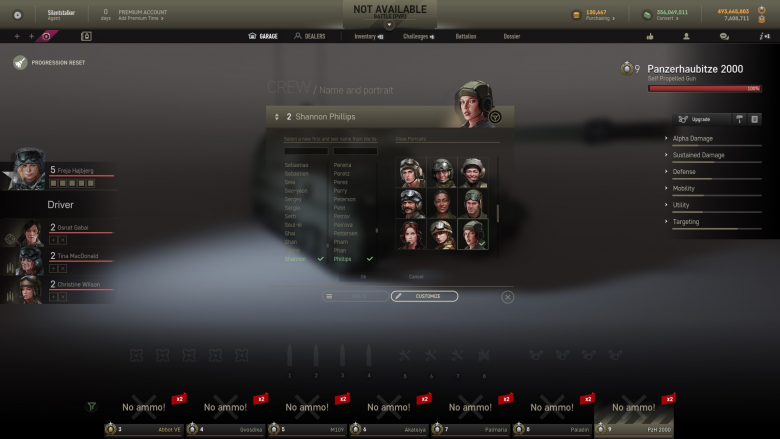 In battle, crew members act as other internal modules. They have a certain amount of hitpoints and enemy shots penetrating vehicle armor can injure them. Injured crew members can significantly reduce vehicle performance – a vehicle with a disabled driver will accelerate and turn slower than one with an active driver. Unlike the internal modules, however, injured crew members won’t heal by themselves and require a consumable (First Aid Kit or Medical Kit) to recover.

The main crew member progression system is the level upgrade. Each crew member starts on Level 1 and can be upgraded to a maximum of level 5. The crew members require a certain amount of Crew Experience to upgrade to the next level. Crew Experience is gained both in PvP and PvE battles and is equal to the amount of Experience gained from that battle (a premium account therefore improves the crew progression rate). Nevertheless, it takes a significant number of battles to upgrade crew members to Level 5 (typically in hundreds of battles).

Crew progression rate can – apart from purchasing a premium account – be improved by certain commander skills boosters and insignia. Furthermore, some premium tanks (such as the MERC edition vehicles) come with fully-trained level 5 crews as well.

Crew vehicle performance improvement can be further enhanced by the commander’s skills, by consumables as well as certain retrofits.

Each crew member (role) can choose from four skills (with exceptions, see below). The following skills can be selected:

The crew skills and level bonuses multiply one another. Please note that for vehicles without a separate loader, there are two possible cases:

‹ Progression (Dealers, Upgrades and Retrofits) up Armor and Ammunition ›
Share