In this part of the guide series we will look at both the dealer system and the upgrade system of Armored Warfare.

In Armored Warfare, vehicles are purchased through dealers, available in the "Vehicles" section of the Garage. To unlock new vehicles from the dealers available in the game, players have to collect two resources:

Experience represents your quality as a mercenary and is tied to specific vehicles. In other words, it’s an indicator of how experienced with each of your vehicles you are. It is used to unlock vehicles, modules and other things.

There is a third resource as well, called Reputation. Reputation (representing your standing with the dealers) is essentially Experience that is not tied to any specific vehicle and can be used the same way Experience is used – but everywhere, not just on the vehicle you gained it with.

These resources can be spent either on buying new vehicles or on upgrading player-owned vehicles. Dealers sell vehicles of 10 tiers and to unlock the next tier, players have to collect a certain amount of Experience on the vehicle of the previous tier. Experience can be obtained in PvP, Global Operations and PvE matches.

In Armored Warfare, vehicle progression is not tied to any particular nation – instead, dealers offer vehicles with similar characteristics but possibly from different nations in one progression branch (defined for example as "high caliber gun, light armor").

Some dealer vehicles are locked by conditions other than just the amount of Experience needed to progress to the next tier - conditions that are usually tied to their gameplay style. Unlocking advanced scouts might, for example, require a certain amount of spotting on lower tier vehicles. Please note that premium vehicles from that respective dealer can be used to complete these requirements.

In Armored Warfare, vehicles are upgraded by using a system of module upgrades - each module improving a certain aspect of the vehicle. 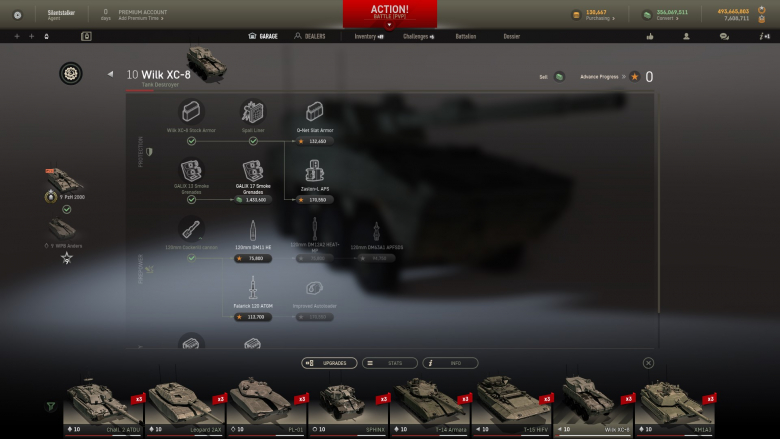 These upgrades are separated into four different categories:

Armor upgrades include various types of additional armor such as applique kits, caged armor kits and explosive reactive armor sets. Upgrading this category increases the survivability of a vehicle.

Firepower upgrades include improved gun shells, guided missiles and even entire guns and other weapons systems. Upgrading this category increases the offensive power of a vehicle.

Technology upgrades include various other elements such as improved gun sights, fire control systems, air conditioning or defensive measures such as APS and smoke grenade launchers. Upgrading this category usually improves the versatility of a vehicle or its secondary characteristics (such as the gun aiming time). Upgrades are purchased for Experience and Credits.

Vehicles with all modules fully unlocked can proceed to allocate Experience to additional bonuses such as unlocking retrofits, new commanders, visual customization options or Reputation (effectively a conversion of Experience to Reputation).

Last but not least, it’s worth noting that the majority of Premium vehicles comes with no upgrade options and is usually comparable to already upgraded progression vehicles.

Retrofits are a unique upgrade system that allows players to customize their vehicles by improving the parameters they rely upon the most.

Each vehicle is fitted with three Retrofit Slots with the fourth one being available to Tier 9 and Tier 10 vehicles.

Retrofit slots are universal and each can be fitted with a retrofit from one of the following categories:

Retrofits are purchased in the Retrofit menu on vehicle by vehicle basis (it’s not possible to unequip a retrofit and use it on another vehicle).

There are two levels of retrofits:

Once a Level 2 Retrofit is unlocked, it can be used to upgrade any vehicle. Retrofits are available to regular and premium tanks.