In Armored Warfare, the default PvP mode is called Random Battles. In it, two teams of 15 players fight each other.

Before entering the PvP battle mode, players have to take the following steps:

Press the red “Action!” button to enter the matchmaker queue. If the Random Battle mode is not selected (you see the mode to the right of the red “Action” button), press the button with the game mode and then, on the HQ screen: 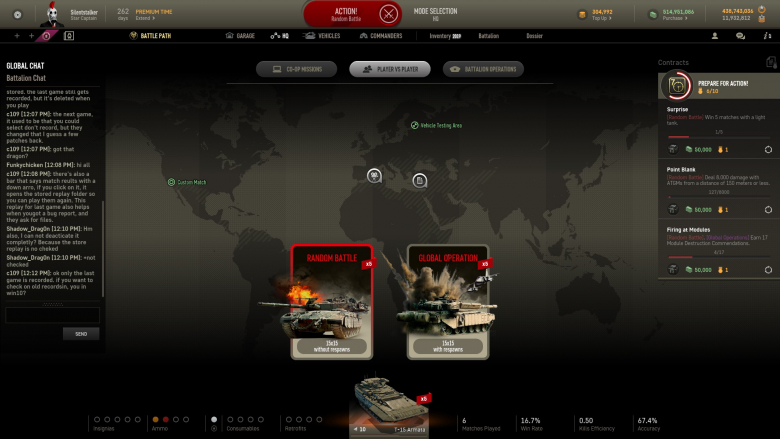 Pressing the “Action!” button puts you in a matchmaking queue. You can see the average waiting time for each Tier in the queue window. The PvP battle queue can be abandoned by clicking the “Leave Queue” button. If a vehicle is already entering the battle, the button will disappear – in this phase the matchmaker mechanism is already assembling both teams.

A loading screen will appear with the setup of both teams including player names and types of vehicles. In Armored Warfare PvP battles, both teams can see the composition of each team, allowing the players to choose their tactics for the upcoming fight. Once a certain number of players have successfully loaded the map, a 30 second countdown until the start of the battle begins. Both teams in PvP battles consist of 15 players (this number can be lower under extraordinary circumstances). Each team controls one base in standard PvP mode. The goal of both teams is to win the battle by one of the following means:

Each battle has a 15 minute time limit. Within that limit one team has to win or lose, otherwise the battle will be declared a draw with reduced rewards for both teams. In order to capture a base, players have to enter the enemy “base circle”, usually located on the other side of the map. Capturing the base takes some time (typically under a minute) – the more vehicles there are capturing (located within the circle), the faster the capture proceeds.

In PvP battles, players are rewarded for their performance with Experience and Credits. Experience can be used to unlock vehicles and their modules in the game, while Credits can be used to purchase vehicles, ammunition and to repair damaged or destroyed vehicles. The winning team receives higher rewards than the losing team, but players on the losing team that have performed well can also gain substantial rewards. Premium account owners also receive 50 percent more credits and reputation points. The battle ends once a base has been captured or the enemy team has been eliminated.

After the battle, players can review their performance on a post-battle debriefing display. 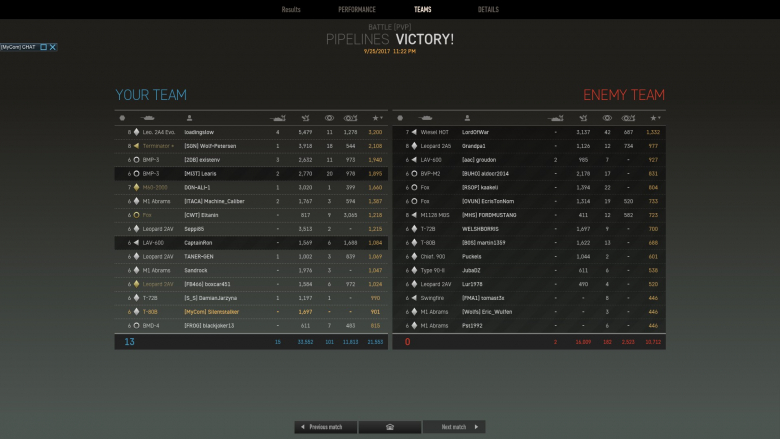 In situations where the matchmaker cannot create full-scale teams larger in a timely manner, players will now be placed into a 3v3 to 6v6 Skirmish match on smaller Skirmish versions of the following maps:

These matches use standard PvP rules although their rewards are somewhat reduced due to the lower number of vehicles on the battlefield.