This month in our Branch of the Month series, we’ll be focusing on Sol Schreiber’s Israeli MBT line. 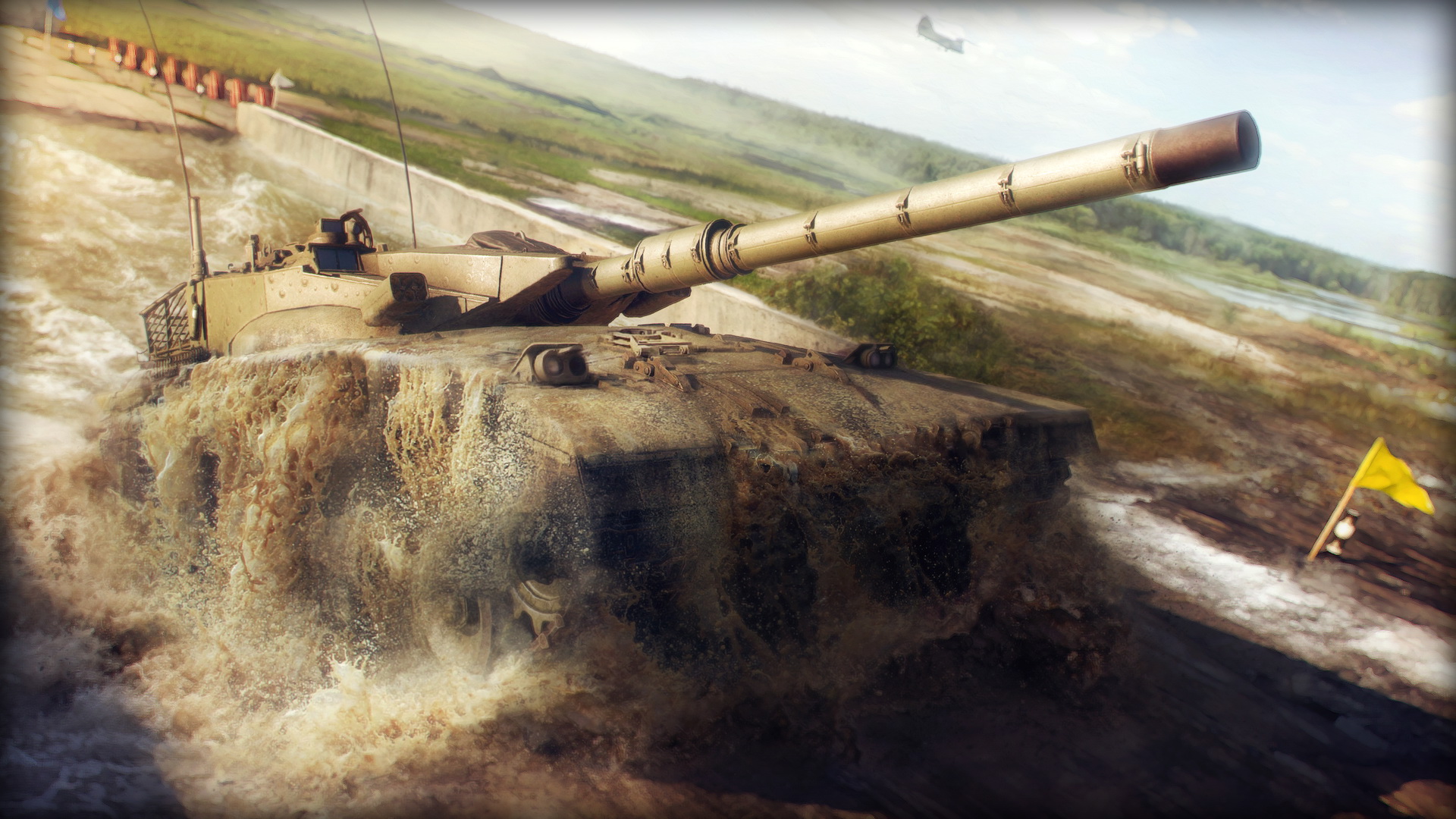 The history of the Israeli MBTs is inevitably tied to the United States of America or, more specifically, to their tank production. Ever since the birth of Israel, (sometimes heavily) modified American MBTs formed the backbone of the Israeli armored might until the appearance of the first Israeli truly indigenous MBT, the Merkava.

Even the first tank Israel obtained in large quantities was originally American – we are, of course, talking about the Sherman.

When the Arab armies invaded in 1948 to squash the nascent Jewish entity, they were, in many cases, armed with wartime British and American weapons left in Northern Africa after the surrender of the German Afrikakorps. The Jews – generally very lightly armed and suffering from the lack of modern weaponry – scrambled and managed to put together a number of salvaged vehicles, including the first Israeli Shermans.

The history of the very early Shermans is described in another dedicated article – some were saved (without their weapons) from an Italian scrap and later retrofitted with cannons (ironically German ones made by Krupp), others were salvaged from wrecks left by the British in Palestine. By the end of the Israeli War of Independence, the newly born Israeli Armored Corps boasted 32 combat-ready Shermans, mostly old wartime models. These 75mm-armed variants received the Israeli designation M3 as opposed to the 76mm variants (purchased after the Independence War) that received the designation M1 (based on the name of its gun) and a nickname that would make them famous – “Super Sherman”.

Both the 75mm M3s and the M1s served in the victorious 1956 Sinai war, ironically fighting against the Egyptian Shermans, but it soon became clear that the next time the Israelis would fight the Arabs, they would be facing late-war Soviet armor instead of worn-out British and American surplus vehicles, which is why they reached out to the French for help with upgrading their tanks to something that could take on the Arab T-34s and live to see the day. Eventually, hundreds were purchased and the Super Sherman continued the serve in the form of the two base models, the M50 and the M51, well into the 1970s. 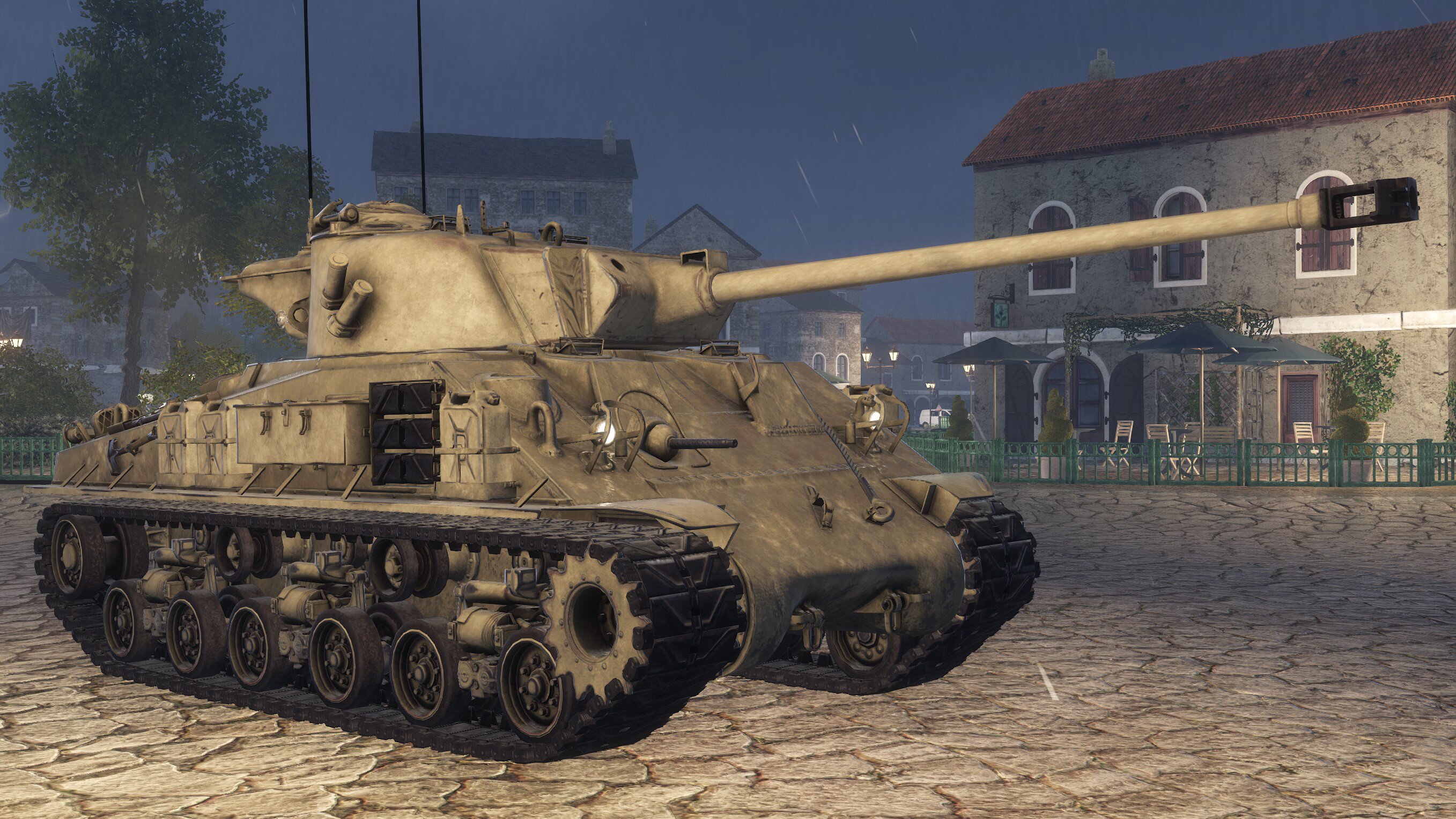 After 1956, however, it was clear that even the upgraded Shermans were growing obsolete and the Israelis started to look for a replacement that came in the form of a British tank called Centurion – in the Israeli service, however, these were known under the name of Sho’t (whip). The reasons why the Israelis purchased the Centurions instead of more American tanks are described in the abovementioned article, but, simply put, this turned out to be the best solution at the time.

At first, the Israelis acquired an older version armed with a 20pdr (84mm) gun, which was later upgraded to its most famous iteration carrying the 105mm L7 rifled gun. The legendary reputation of these tanks was forged in the fires of the 1973 Yom Kippur War where Israeli Sho’t units fought against incredible odds, defeating both superior enemy numbers and better equipment operated by the Arabs. They, however, took heavy losses and a complicated political relationship with Great Britain basically meant that the Israelis, always on a lookout for good tanks to buy, had to rely on yet another design – the American Patton.

Over the years, the Israelis bought a large number of different Patton models, which all, however, shared one Israeli name: Magach. There are several theories as to what that name means with the most common ones being:

Regardless of the name origins, Israel got their hands on hundreds of Magach tanks starting from 1965 or so – and the last of them were retired only relatively recently in 2014. The fact the Israelis were able to keep them not only operational, but also competitive for this long is quite a feat indeed. The main Magach models included:

And, finally, there was the famous Merkava tank. There are a lot of myths going around but, in reality, the tank was pretty conventional and its first iterations were barely any better than the American M60A1 Patton tank. Over the time, it improved significantly. Armored Warfare features five progression variants of this tank:

The Merkava will without any doubt continue to serve for years to come, replacing all the other tanks in Israeli service – after all it’s certainly one of the best MBTs in the world.

From February 1 to February 28, 2019, the following vehicles will be available for lower Credit price than usual as well as with 30 percent discount on their Battle-Hardened status: 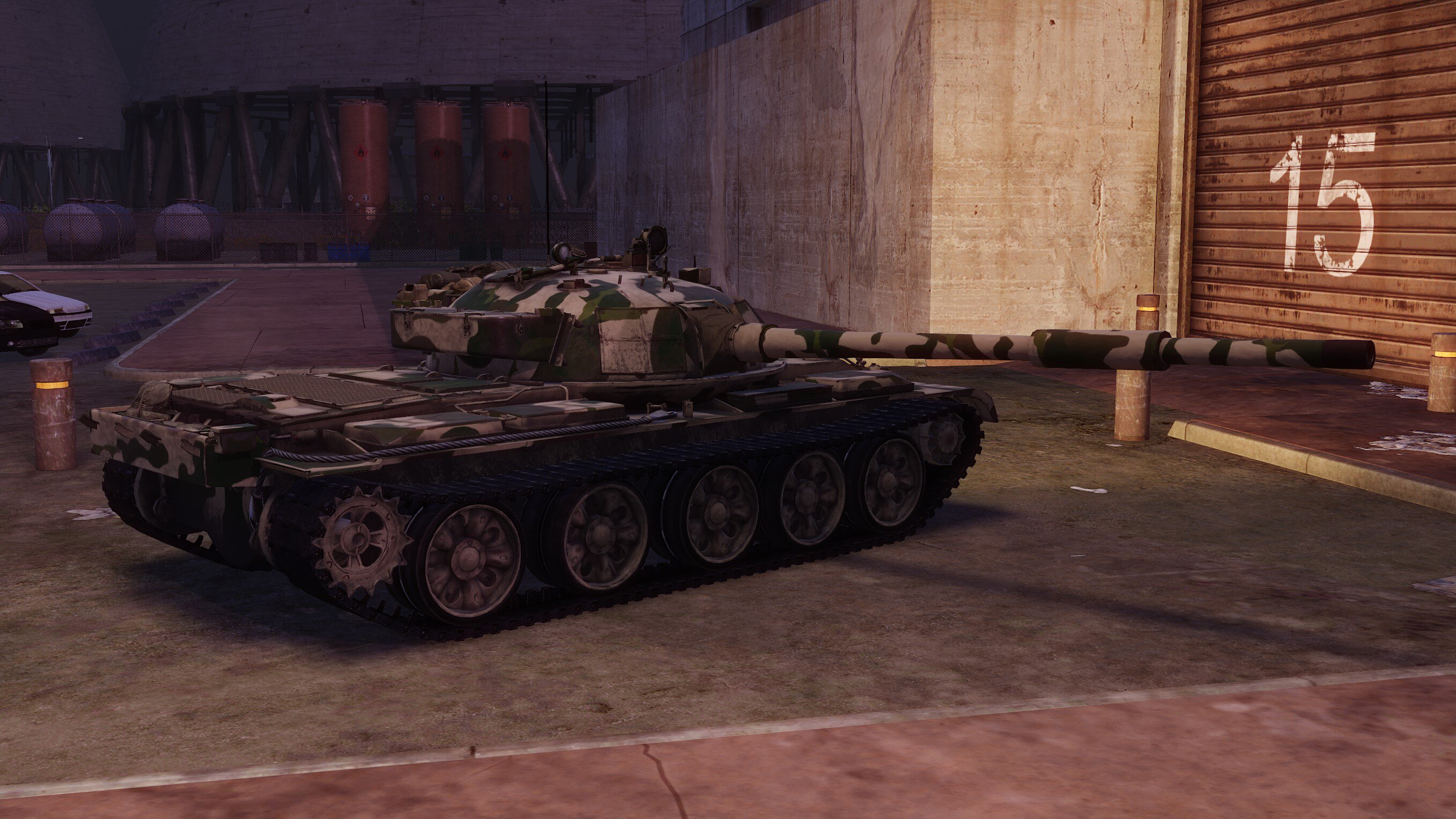 Tiran 6 Tier 3 MBT – the Tiran 6 is a captured Soviet T-62 MBT, pressed into Israeli service. The Israelis had a long history of using captured enemy equipment before the standardization that came with the Merkava series and the Soviet T-54s, T-55s and T-62s that were sold to their Arab rivals were no exception. Unlike the T-54/55 tanks, however, the T-62s in Israeli service were not significantly modified and kept their old armament in the form of a 115mm smoothbore gun that proved to be very effective against the Israeli Centurions and Magach tanks deployed during the 1973 Yom Kippur War. You can read more about it in our dedicated article.

Sho’t Kal Dalet Tier 4 MBT – this is an upgraded Israeli Centurion tank. Israel obtained a number of these tanks from Great Britain in the late 1950s and 1960s and gradually had them re-armed with the famous British L7 105mm rifled gun. They proved to be effective, if vulnerable, fighting machines during the Six Day War and the Yom Kippur War, the latter forging the legendary reputation they enjoy today. Please note that, recently, the previously Tier 2 Sho’t Kal Dalet was moved to Tier 4. You can read more about this tank in our dedicated article.

Magach 5 Tier 4 MBT – Magach is the Israeli name for all the American Patton series tanks in its service. For a very long time, these were the backbone of the Israeli armored might. The Magach 5 model was an upgraded M48A5 tank – the last M48 series version armed with the same 105mm rifled gun the Sho’t carried. You can read more about this tank in our dedicated article. 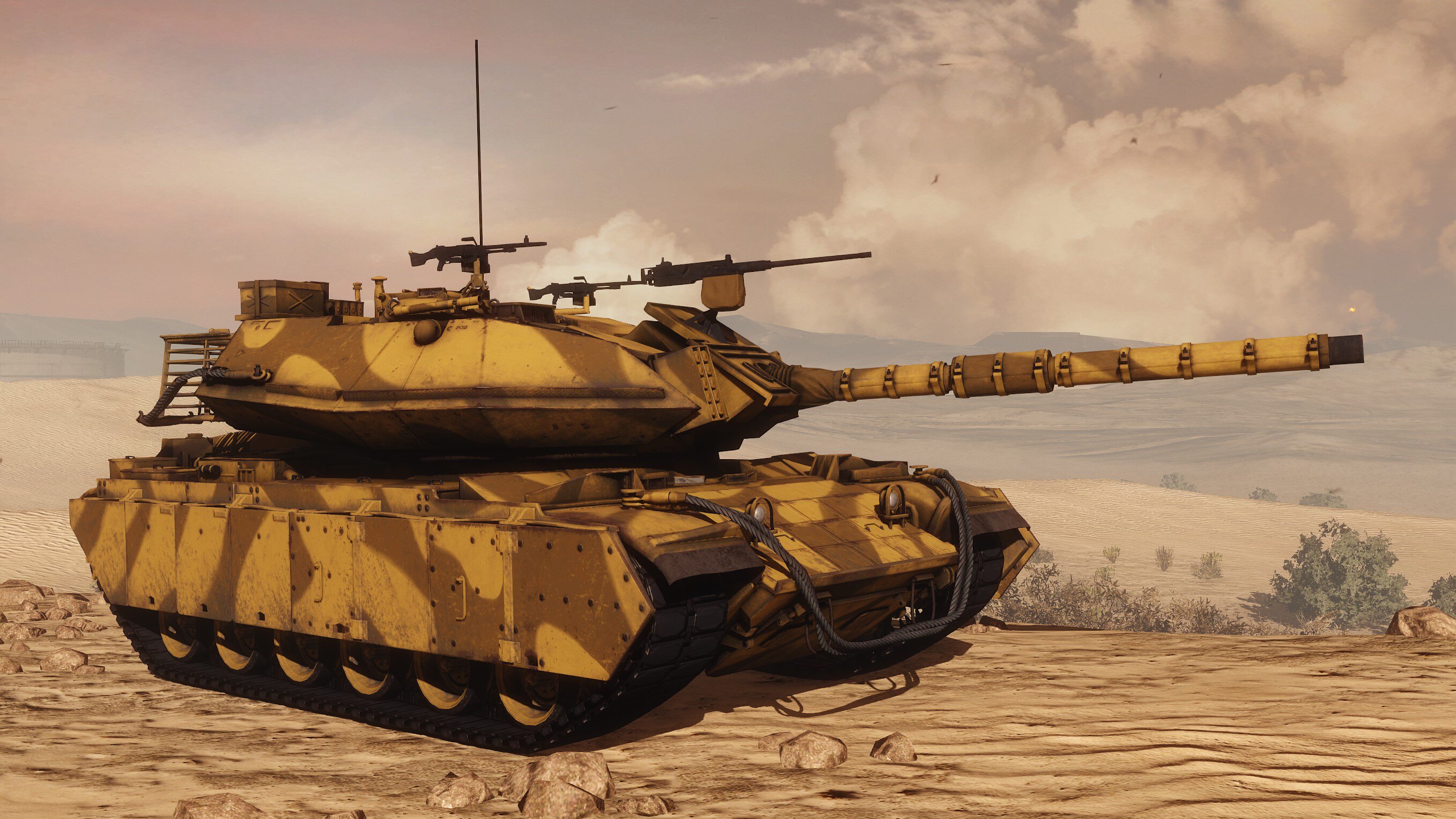 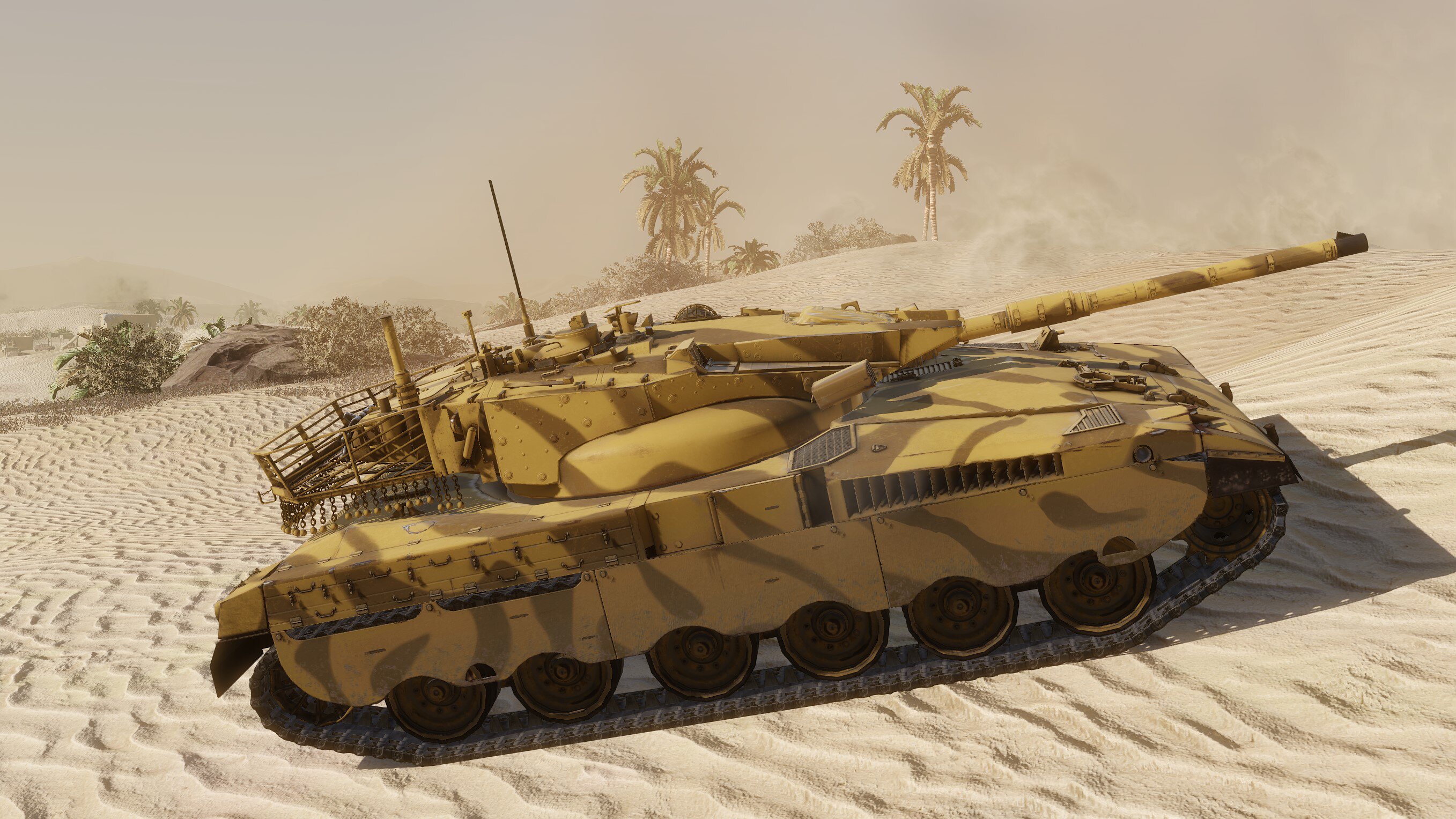 Merkava Mk.1 Tier 5 MBT – this was the first Merkava model in Israeli service. Built as an indigenous tank at great cost, it wasn’t all that great and was rushed into service before all its quirks were caught. However, it turned out to be a solid foundation for one of the most recognized and celebrated tank series in the world. You can read more about this tank in our dedicated article. 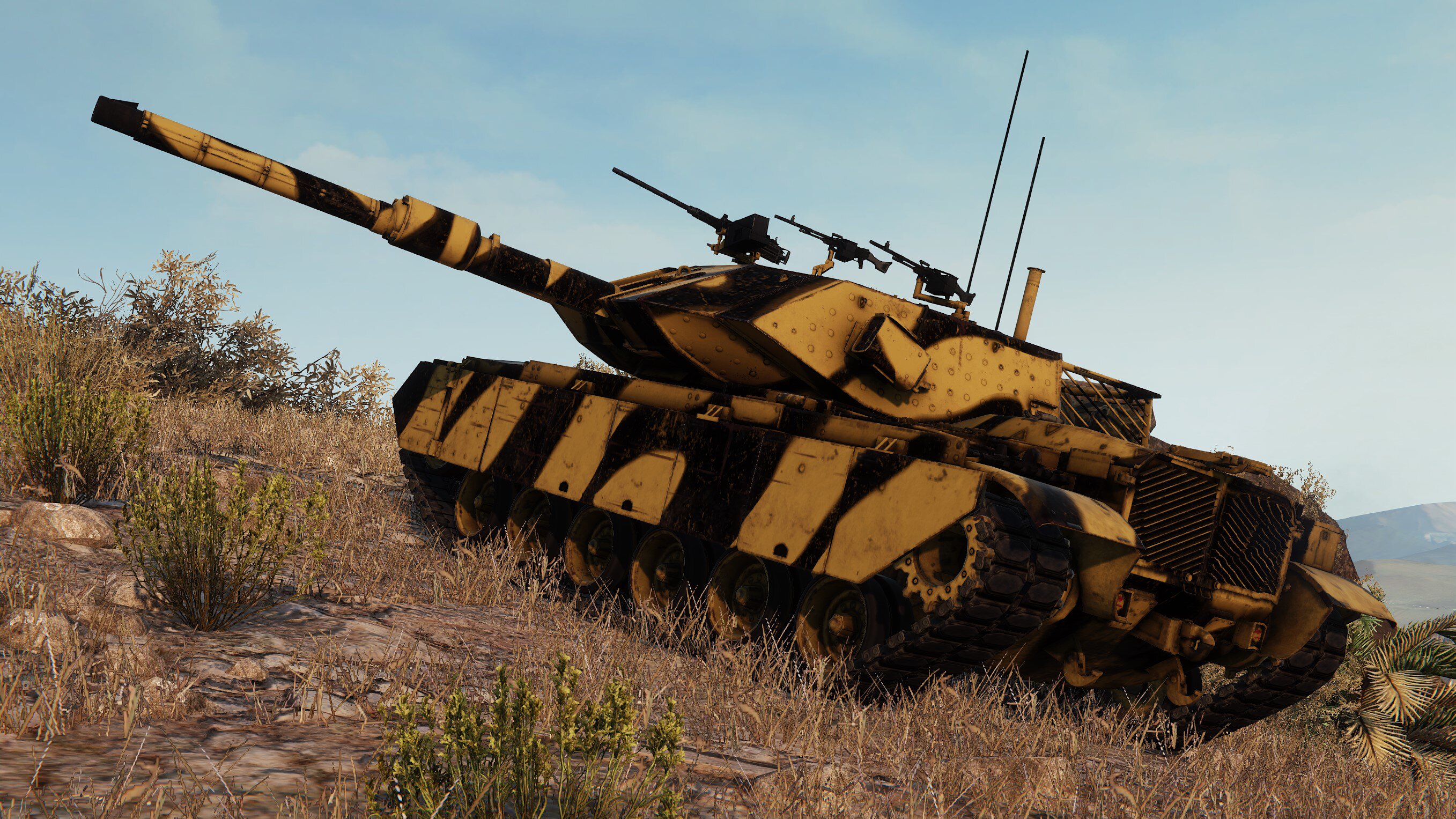 Magach 7C Tier 6 MBT – the Magach 7C is the ultimate version of the Israeli Magach program. Its thick armor offered excellent protection against terrorist-fired ATGMs which are the biggest threat to the Israeli tanks to this day. It was phased out from service only relatively recently, in 2014. You can read more about this tank in our dedicated article. 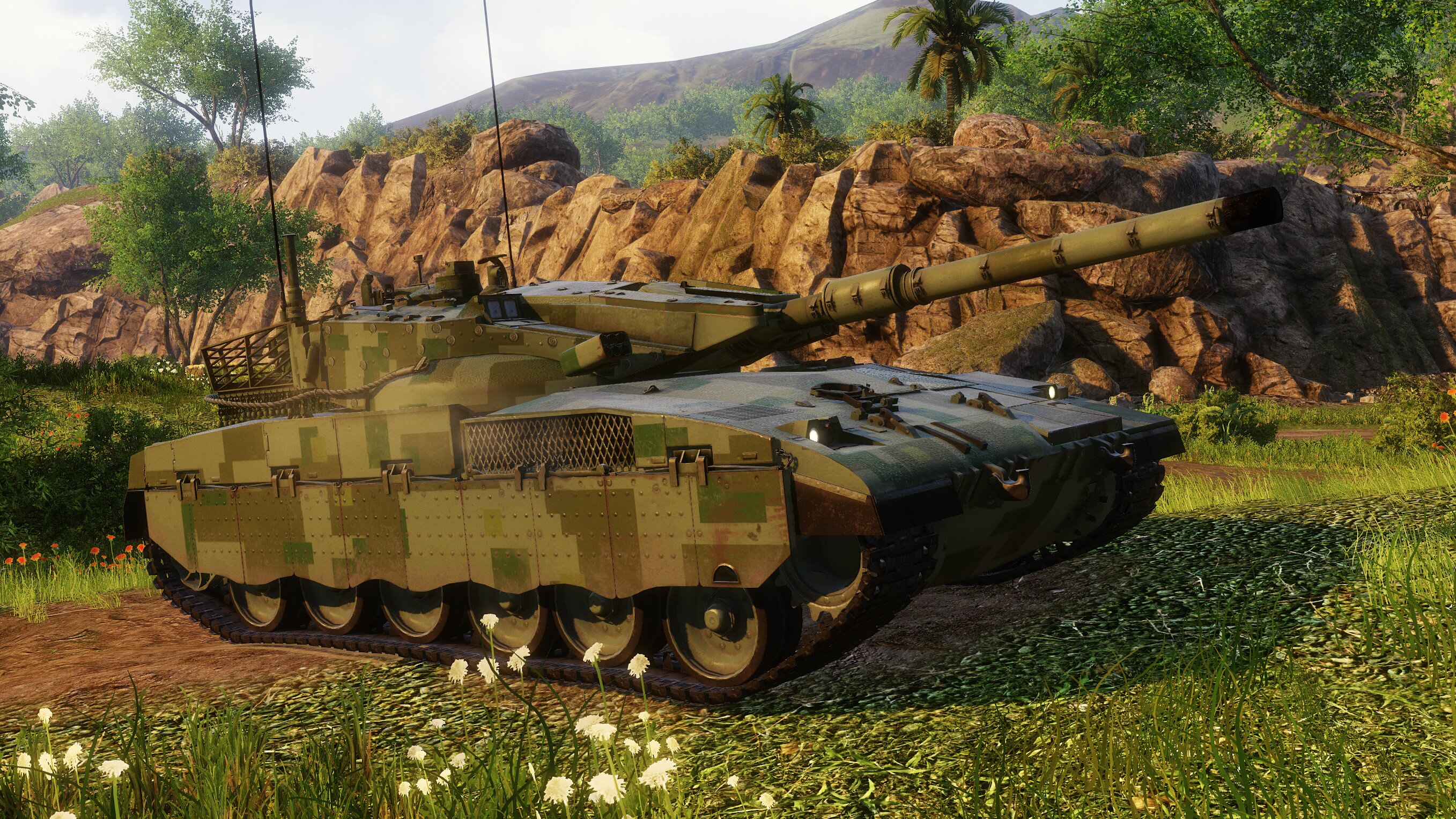 Merkava Mk.2B Tier 6 MBT – the Merkava Mk.2 is what Mk.1 should have been – a full-fledged production variant with many of its worst issues addressed. While it retained the 105mm gun of its Mk.1 predecessor, it was also continuously updated, including heavy turret armor against HEAT projectiles (RPGs, ATGMs) fired from rooftops. You can read more about this tank in our dedicated article. 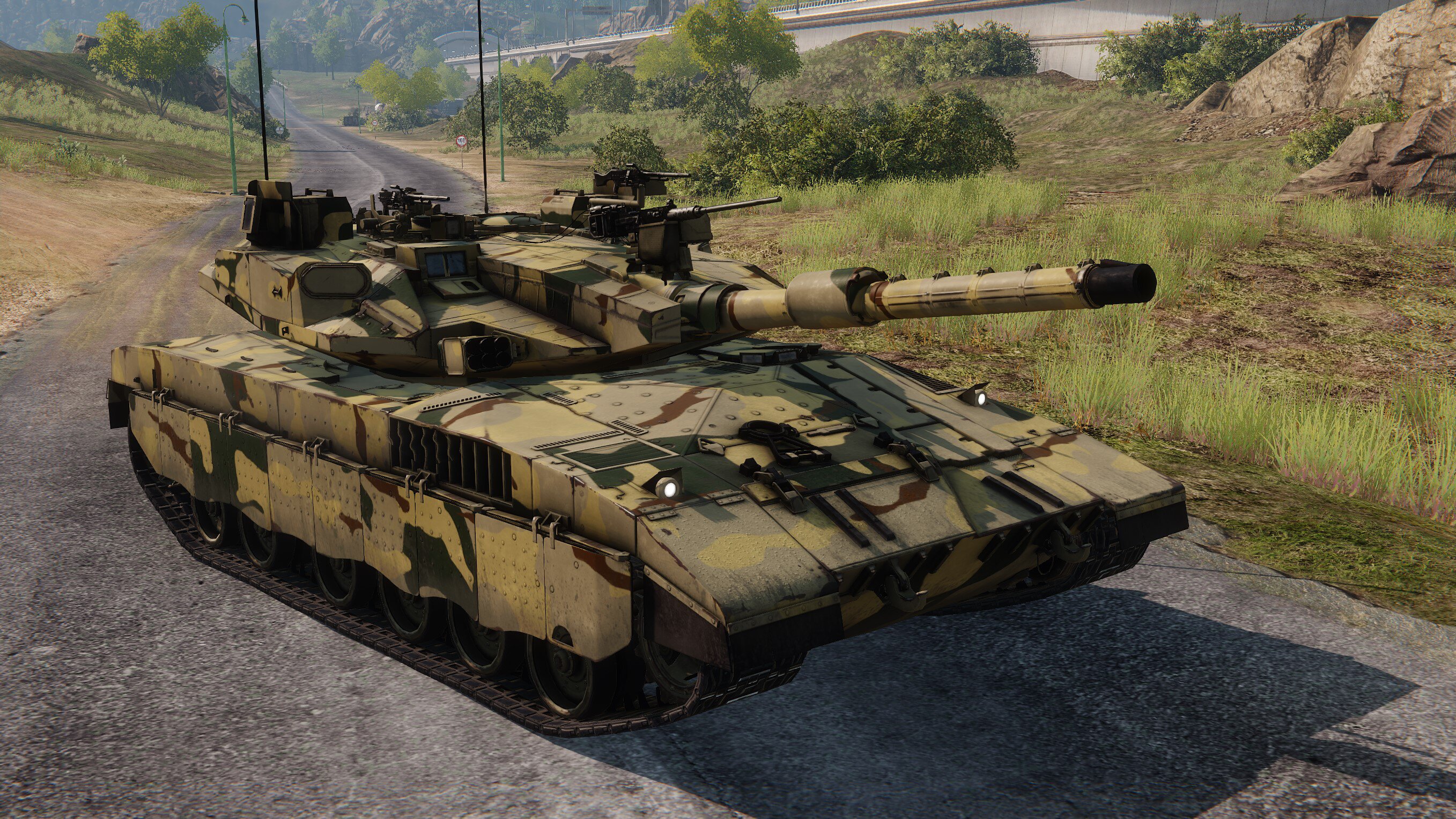 Merkava Mk.3D Barak Zoher Tier 8 MBT – the first truly major upgrade to the Merkava included the replacement of its 105mm gun with a considerably more powerful IMI 120mm smoothbore cannon. This variant was called Mk.3 and, like its Mk.2 predecessor, continued to be upgraded, including heavy passive armor to protect it against incoming ATGMs and other threats. You can read more about this tank in our dedicated article. 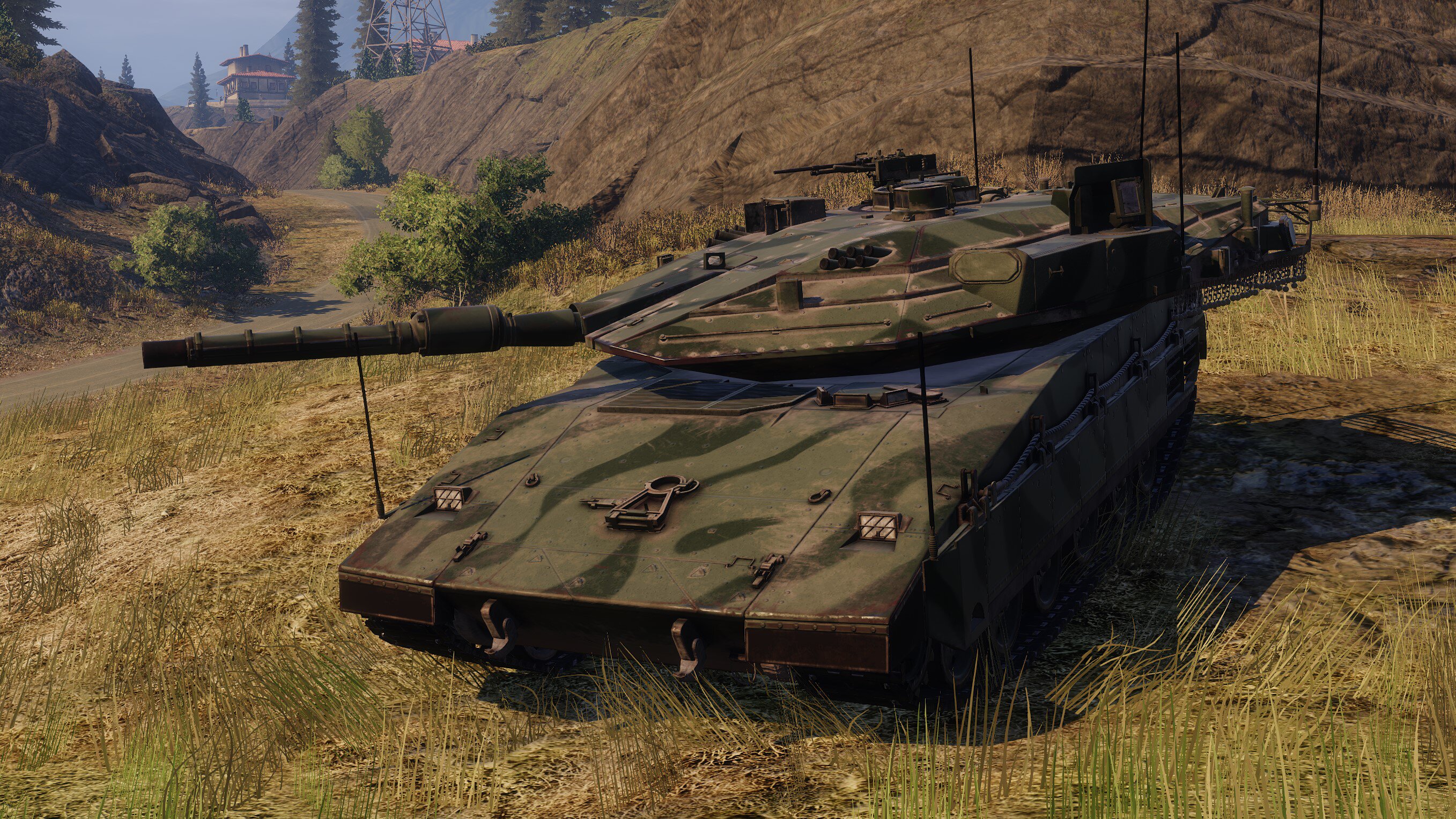 Merkava Mk.4 Tier 9 MBT – this is the 120mm cannon Merkava, optimized for better battlefield connectivity and asymmetric warfare. Armed insurgent groups are the current biggest threat to IDF and the Mk.4 model was designed to meet it head on and then some. You can read more about this tank in our dedicated article. 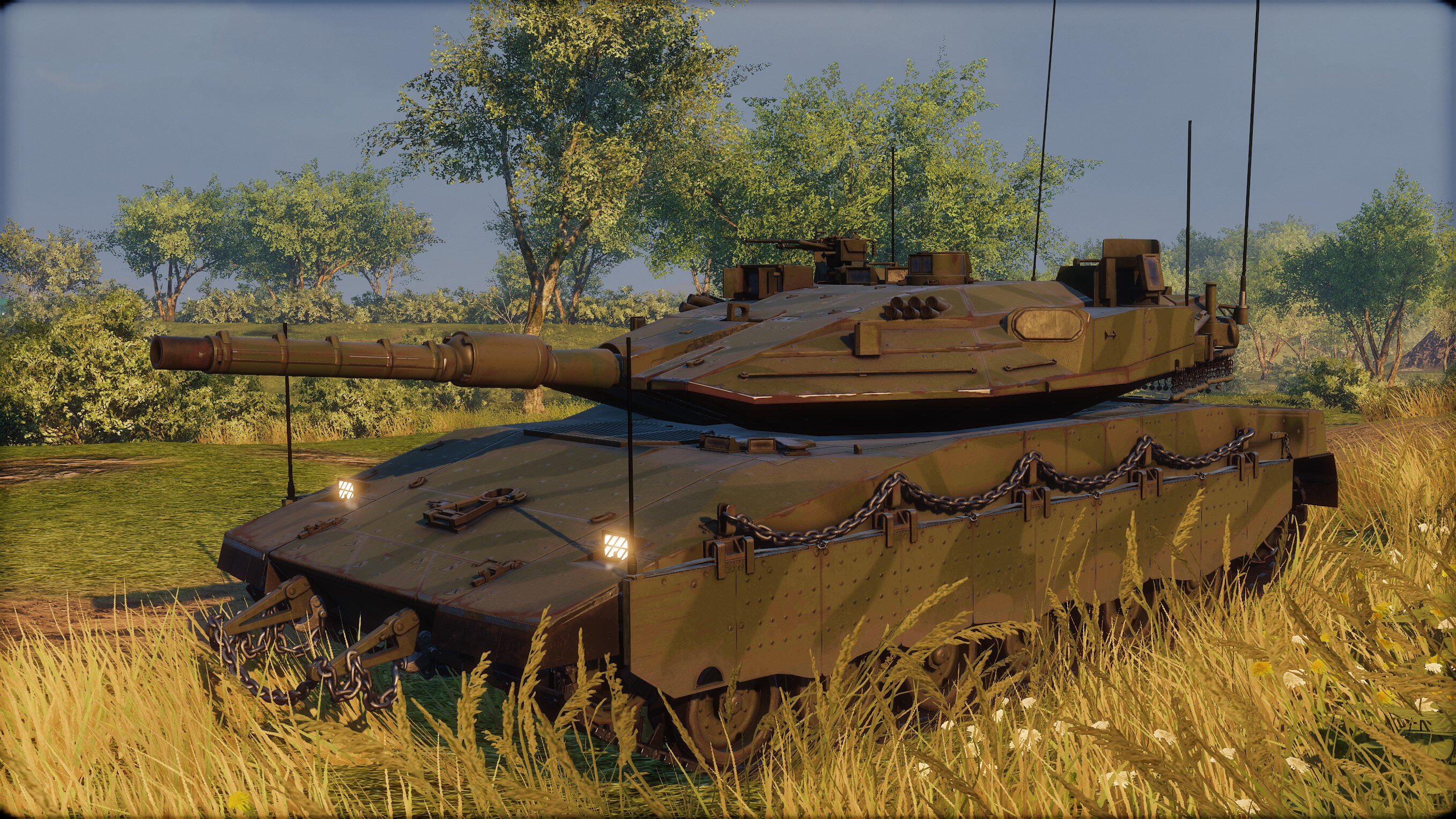 Merkava Mk.4M Tier 10 MBT – the final vehicle of this branch is a Mk.4 Merkava, equipped with some cutting edge technologies, including a next generation Trophy APS, capable of shooting down kinetic projectiles. You can read more about this tank in our dedicated article.

Generally speaking, the lower Tiers of the Solomon Schreiber MBT branch offer sniping playstyle (at least within the confines of the MBT class). These vehicles are reasonably well protected but their true strength lies in their accurate guns and long range firepower in the best Israeli tactics tradition.

The Merkavas are, however, a bit different. Where the German MBTs are the class snipers, the British MBTs offer excellent armor thickness and the Russian MBTs are close range brawlers, the Israeli Merkavas do not only rely on passive, but also on active defense in combination with burst-oriented firepower.

While their armor may not be the thickest in the game, they feature some of the most advanced Active Protection Systems available with the Tier 10 Merkava’s “next generation Trophy” system being able to defeat any type of shell – including the APFSDS shells (the only other APS capable of such a feat is the Armata’s Afganit).

The Merkavas also feature the Ready Rack mechanism, allowing them to fire faster than other tanks of their class and Tier – for a certain period of time, followed by a longer reload period. Additionally, the later Merkavas feature the LAHAT gun-launched missiles.

All in all, Sol Schreiber’s vehicles are – in their philosophy – the polar opposite of the Oscar Faraday dealer. Where Faraday’s offer consists of specialist vehicles intended for advanced players, Sol Schreiber’s vehicles are generally very friendly to new players, offering a great starting vehicle set without massive disadvantages or special tactics requirements. Additionally, Tier 1 to Tier 6 tanks are unlocked faster than for the other dealers and offer links to other trees as well as the option to try out different progression tanks on provisional basis.

Celebrating Defender of the Fatherland Day

Learn more about the gift we’ve prepared for you!