You are already familiar with the Magach series of Main Battle Tanks – these were variants of the American M48 Patton series, upgraded for Israeli service. The Magach 6 is, simply put, an M60 series improved to match Israeli needs. Sounds understandable enough? Don’t worry, it gets more complicated than that.

In the early 1970s, American arms were flowing already into Israel relatively freely in order to offset the massive arms deals provided by the Soviet Union to its Arab allies. These also included some of the best American tanks available, the M60 series with 150 M60 tanks (designated Magach 6 in Israeli service) delivered for the first time in 1971 to the Israeli port of Haifa, followed by a number of M60A1 tanks two years later, in 1973.

Here’s where things get interesting.

For one, contrary to what we wrote earlier in the M60 article, the M60 tanks were, in fact, exported to Israel along with the M60A1 and its successors. The reason why this is so rarely mentioned is likely the confusion of the M60s with similar-looking upgraded M48s.

Unfortunately, many sources freely interchange both vehicles (referring to both tanks simply as “M60”), leading to a lot of confusion. To simplify the Issue:

Of all the machines the Israelis could buy, the M60A1 series tanks were at that time perhaps the ultimate choice. With the failure of their attempts to acquire British Chieftain MBTs, American tanks seemed like the best option, especially when considering the fickle nature of British and French foreign policies when it came to their interests in the Middle East. 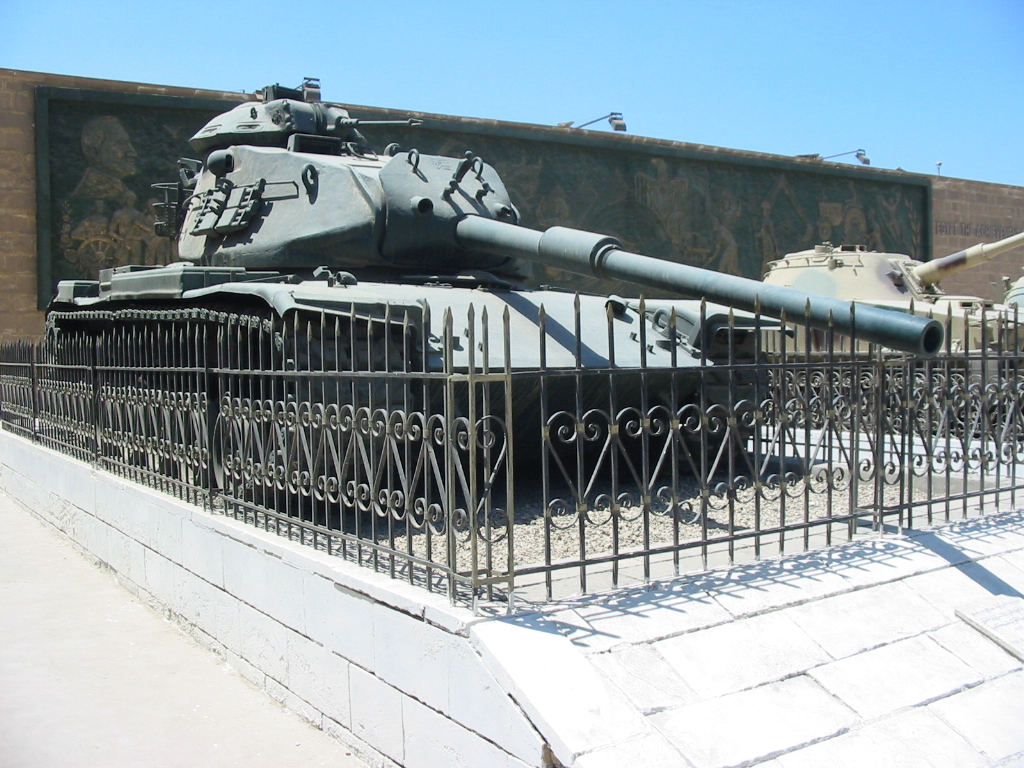 The basic M60A1 tank was a clear upgrade compared to the M48 series. More info about its development can be obtained from a dedicated article, but, in short, the basic layout was the same – the vehicle weighed 47.6 tons and had the same crew (commander, gunner, driver and loader) behind its steel-only armor, but the protection was increased to the following levels:

The main weapon was, once again, a 105mm rifled cannon but, compared to the older Magachs, it had better gun depression and elevation (-10/+20 degrees) and the tank carried more ammunition (63 rounds).

Aside from the improved armor and its gun, the vehicle was powered by the same diesel engine other Magach and Sho’t tanks used – the 750hp Continental AVDS-1790-2A, allowing the vehicle to go as fast as 48 km/h. The Israeli troops loved its mobility and agility compared to their older vehicles – until they first went to combat in them in 1973.

It was a disaster – the tank performed well enough but its steel armor could not protect its crew against incoming Malyutka missiles launched by Soviet-trained Egyptian and Syrian infantry teams as well as from the BMP-1s that were supplied to the Arab armies en-masse. When the war broke out, most of these vehicles were deployed in the south against the Egyptians and suffered heavy losses with more than one half of all active Magach tanks being destroyed in the war (200 out of 540 Magach tanks, survived, but this number includes the M48 Magach series).

What was worse, the infamous burning hydraulic fluid issue affected the Magach 6 series tanks just like the Magach 5 and caused massive losses even amongst the Magach 6 crews. When the war finally ended, the nation was in a deep state of shock and the massive Magach tank losses played a major role in it to the point where, according to a widely circulated story, parents of drafted soldiers did their utmost to have their sons assigned to Centurion units because, unlike the Magach, the Sho’t tanks gained a reputation for their ruggedness. On the other hand, the crews started jokingly referring to their Magach tanks as “Movil Gviyot Charukhot” (“carrier of charred bodies”) in reference to the burning hydraulic fluid. 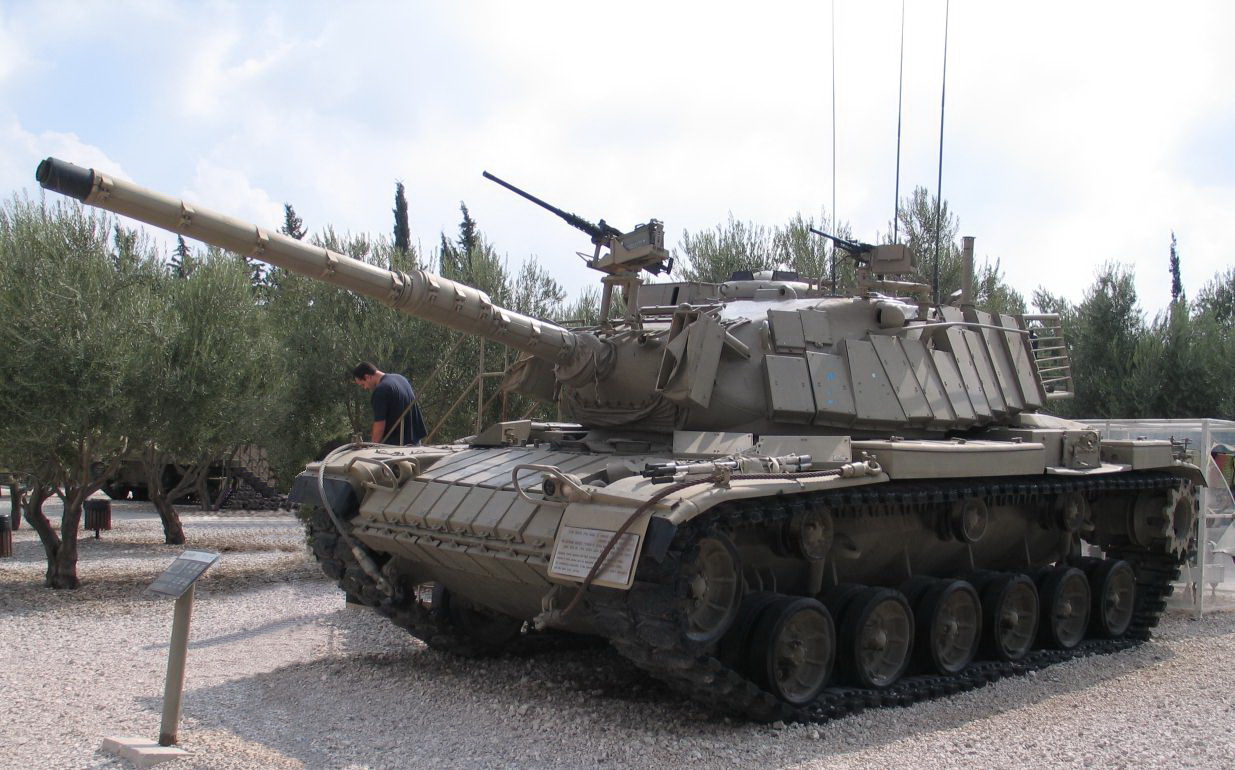 But, changes were coming.

In 1978, a large batch of M60A1 RISE tanks arrived in Israel. The RISE tanks had a new engine (AVDS-1790-2C 750hp diesel paired with improved CD-850-6A transmission). The goal of the RISE upgrade was to improve its reliability and the 2C engine variant was developed with improved starters, fuel injection, cylinders, electric systems and superchargers. Although it did not produce more power than the original engine, the lifespan was much better. The vehicles also had the M60A1 (AOS) upgrades that included:

These tanks then participated in the 1982 Operation Peace for Galilee in Lebanon where the upgraded armor proved its worth by stopping the vast majority of Soviet Malyutka missiles – the losses of 1973 would not repeat themselves.

But, there was no denying it. Even with its Blazer ERA upgrade, the Magach tanks were becoming increasingly obsolete. The frontal protection of the basic M60A1 was 254mm of steel armor but by the end of the 1970s, typical modern kinetic rounds could penetrate around 400mm of RHAe and the number was increasing rapidly. The Blazer kit didn’t really improve the situation – it was effective against older guided missiles and RPGs (in other words, HEAT projectiles) but had almost no effect on kinetic shell impacts despite its additional weight of roughly 1 ton.

Starting from the late 1970s, Israel also acquired 300 even more modern M60A3 TTS American MBTs but, protection-wise, these wouldn’t solve the situation either (the armor was identical to the M60A1 model). These were referred to as Magach 6C (6 Gimel) and were basically upgraded to 6B standard. 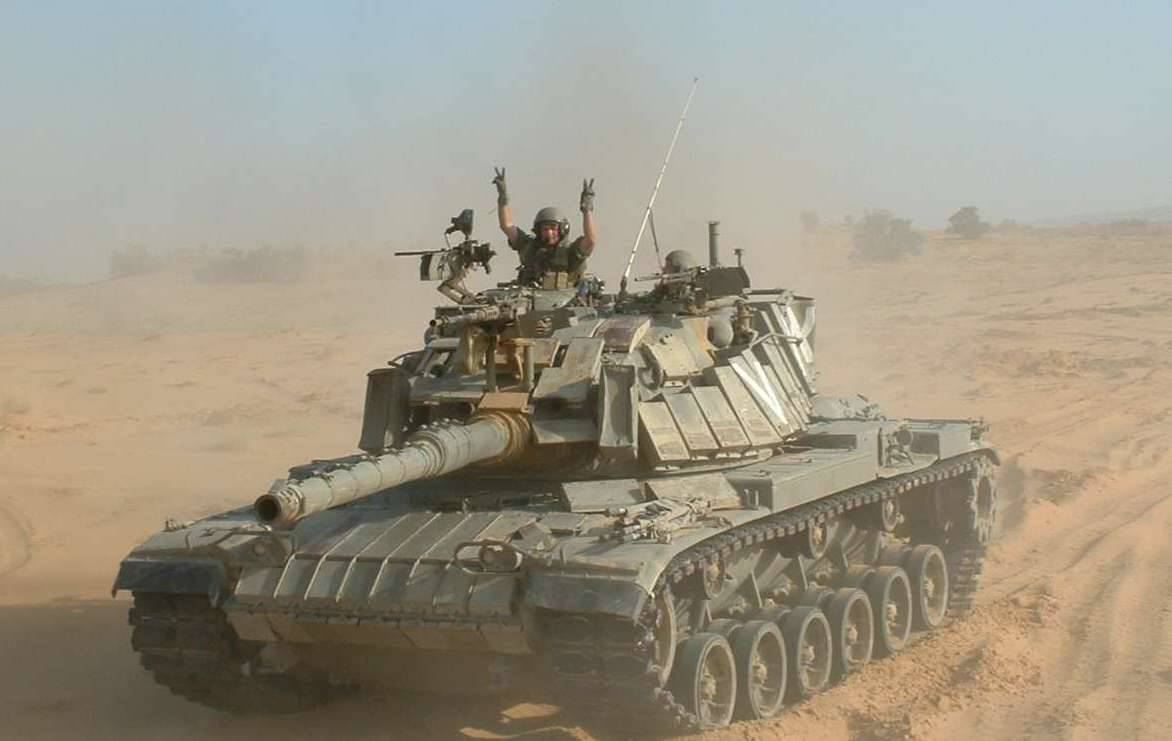 At the same time, the Merkava (by then available and replacing the oldest service models) was still not ready in sufficient numbers and purchasing yet another modern type of MBT was not really an option for Israel due to prohibitively high costs of such a program. The way the Israelis saw it, there were basically two solution to the whole Magach problem:

The first direction resulted in several upgrades, most notably the Gal (“Wave”) Fire Control System that was installed on the Magach 6B, resulting in a variant called Magach 6B Gal (it’s worth noting that Magach 6C tanks were not upgraded to this level as they had their own more advanced American FCS.) This variant can be recognized by large optics armored housing in front of its Urdan commander’s cupola and represents a significant improvement to the older M13 ballistics computer and M17 optical rangefinder combination. It includes a laser rangefinder and a new ballistics computer. The FCS was also offered to international buyers under the name “Matador”. The vehicle also has a new Merkava-style thermal shroud on its gun and a crosswind sensor on its turret roof. Until the 1990s, this was considered to be the best Magach variant available to Israel. 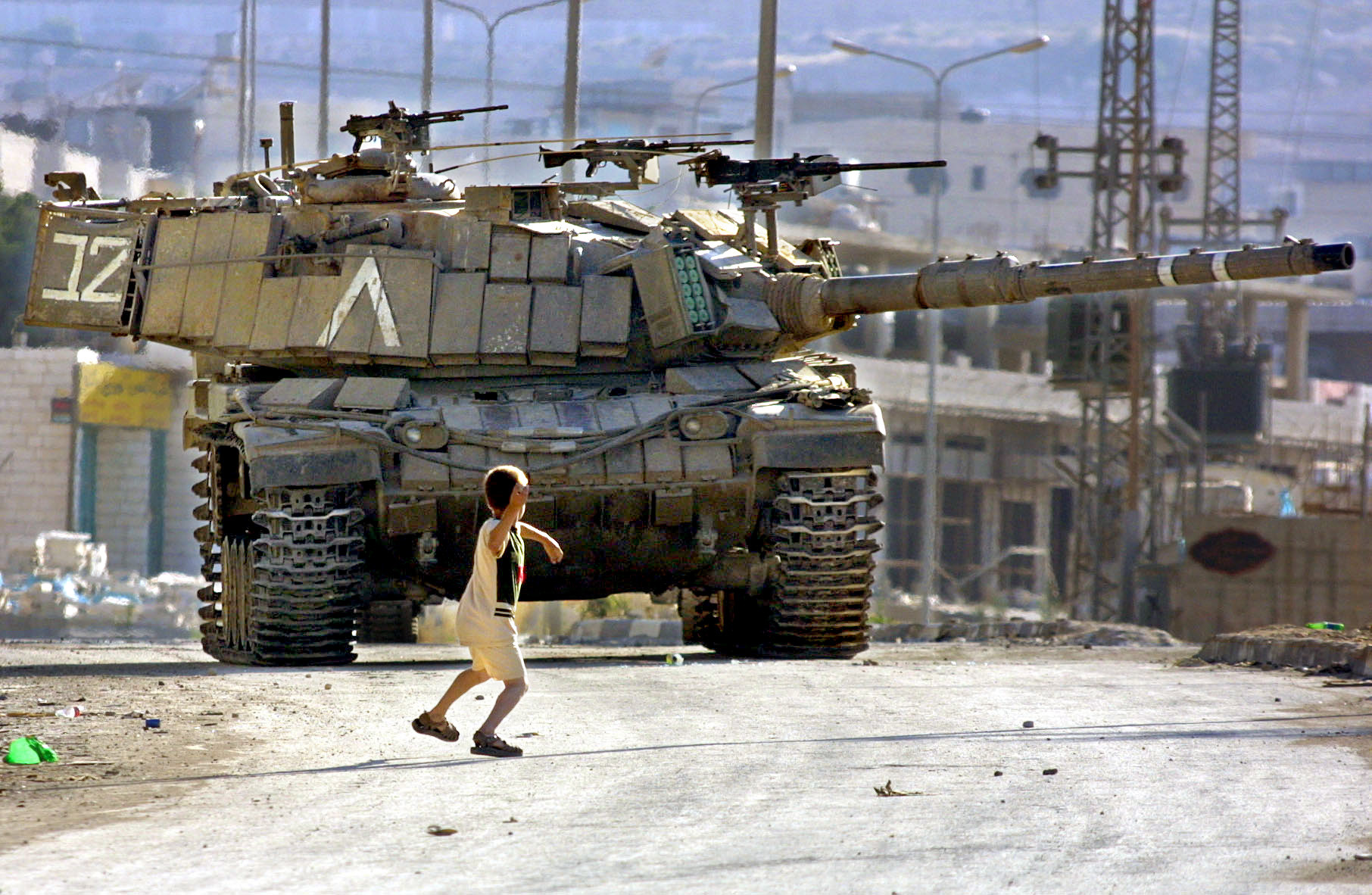 But the final step in the Magach 6B evolution came in the late 1990s. By that time, the Magach 6B had been in service for more than two decades and its original armor, even with the Blazer upgrade, was considered to be obsolete. Even though Israel hadn’t been involved in a major war since 1982, its tanks were still targeted by Hezbollah militia fighters who were using rather modern guided missiles.

To combat this thread, a set of applique armor by IMI was added to the original Magach 6B turret. Interestingly enough, it was developed in mere 10 weeks from the order, specifically for the kind of low intensity conflicts the Israeli tanks were expected to find themselves in. This set (based on the Merkava spaced armor design) was accompanied by hull armor upgrades (including more advanced Blazer armor tiles) as well as thicker tank belly armor to resist IED blasts and side skirts. It was referred to as “Batash” (an acronym for “Bitachom Shotef”- “overall security”).

Naturally, this amount of upgraded armor weighed something. To compensate for that increase, the vehicle received a new 908hp version of the older AVDS diesel called AVDS-1790-5A with the same transmission as used on the Merkava 1 MBT. The suspension was upgraded as well and the tank used lighter Merkava style tracks. In the end, the weight of the vehicle remained the same as before, some 50 tons.

Thus retrofitted, the Magach 6B Gal tanks were referred to as Magach 6B Gal Batash and remained in low intensity service (such as during the Palestinian Intifada of 2002) for another decade and a half before being phased out completely in 2014 along with the rest of the Magach models.

In Armored Warfare, the Magach 6B Gal Batash will be an Israeli Branch Tier 5 Progression Main Battle Tank.

Gameplay-wise, the Tier 5 Gal Batash will follow the previous Magach 5 but will be more well-rounded and more mobile. Its protection and mobility levels will be average for its Tier and comparable to its American counterpart, the M60A3. Where this vehicle will really shine, however, will be its accuracy – it will have the most accurate gun of its Tier and Class, allowing for some excellent sharpshooting.

The other firepower values (including damage per minute and damage per shot) will be more to the average side for its Tier, but its excellent viewrange and solid camouflage (for an MBT) will make it an effective sniper for those players who prefer a jack-of-all-trades vehicle compared to the all-out firepower of a Tank Destroyer.

Learn about a Tier 8 Israeli Main Battle Tank, coming to Armored Warfare during the first Season

We are happy to present the launch of the second part of the Black Sea Incursion season, bringing a large number of long-awaited features and improvements!