The Magach 5 Main Battle Tank is in its core an upgraded M48A5 American MBT, which in turn is an upgraded M48A3. The Magach story is quite long and interesting – for the purpose of this article, we’ll split it into three sections, each answering one of the following questions:

Starting with the first question, we have to get back to the M50 and M51 articles – or, more specifically, to the part dealing with Israeli and American relationships and why, despite the United States of America currently being Israel’s staunchest ally, the Americans refused to sell weapons to the newly-born nation in 1948.

The reason was actually quite simple. On an emotional level, the American society, all the way up to the president, was deeply shocked by the suffering of the Jews during the war. At the same time, however, the administration (including the Truman one, despite Truman himself being very supportive to the Jewish communities) was considerably more pragmatic and strove to secure the goodwill of the Arabic nations in the Middle East, now independent of the crumbling British Empire.

This stance was also reflected by the Great Britain. The Jewish migration to Palestine was a sensitive issue, made even more complicated by the fact that the Palestinians openly supported Germany during the Second World War, but the Arab strength was generally not underestimated – quite the opposite. The Jews tried to persuade the British of their own strength, resulting in a high number of anti-British attacks in Palestine.

The Soviet Union, on the other hand, saw this as an opportunity to gain influence in the Middle East at the expense of the western powers and initially even supported the Jews as the means to undermine the British. It quickly turned out, however, that the Arabs, angry from the political and military defeat of the 1948 war and the birth of Israel, would make for a far better ally.

The war, while a stunning victory for the Jewish community in Palestine, left a bitter aftertaste almost everywhere. For the Jews, it was the high personal losses. For the British, it was the memory of the pre-war Jewish attacks and their political defeat. For the Americans, it was the relentless pressure of the local Jewish diaspora as well as the fear of losing influence in the Middle East. Especially the last point weighed heavily on them with Egypt and Syria turning decidedly pro-Soviet following an unsuccessful attempt to obtain money from the west while maintaining the opinion that Israel should be removed from the face of the world, preferably with all its Jewish inhabitants along with it.

For the United States, the early 1950s proved to be, once again, anything but peaceful with the Korean War ending in 1953 with more than 30 thousand dead Americans and 100 thousand more wounded. The United Nations intervention in Korea was a success and contained the advance of the North-Korean armies (along with hundreds of thousands of Chinese “volunteers”), but it was a costly one too. In order to prevent such an escalation in the Middle East, the United States decided to not supply Israel with modern weaponry (like they did with the NATO countries). After all, the last thing the U.S. public longed for was another such “intervention” after one had just ended. That is why, when Israel attempted to purchase several dozen M47 tanks in 1955, the request was refused and another such refusal followed in 1958. 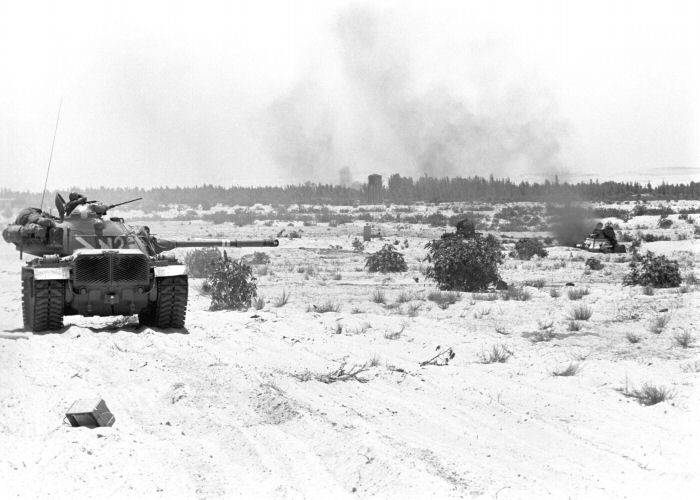 The Soviets weren’t as squeamish and, starting from the mid-1950s, started supplying Syria and Egypt with an incredibly high amount of relatively modern weapons, mostly through Czechoslovakia. This buildup resulted in the 1956 Suez crisis where the combined armies of Israel, France and Great Britain forced Egypt to once again open the Suez Canal. This operation had several notable results:

But the event also showed that the Soviet Union was not afraid of military buildups in the area and it became clear that the restrictive arms policy the U.S. applied to Israel was not really working. At the same time, the American interests in the area were still a thing to be considered, which is why, starting from the early 1960s, the United States started supplying modern weaponry via West Germany, including the M48 series tanks. The initial batch of U.S. tanks consisted of 150 M48A1 and M48A2 MBTs (40 from West Germany and 110 from the United States of America).

There is an alternative take on how this all went down, however. The truth is that the entire German-Israeli cooperation was more often than not of clandestine nature given their past and much of the German arms that made it to Israel were delivered to pay off the Holocaust reparations. Some of these were allegedly kept secret even from the United States, much to their annoyance since the U.S. administration was keen on keeping tabs on where all American weapons were going and did put a quick end to the whole operation. Either way, between 1965 and 1966, 210 tanks were delivered in total and by 1967, Israel had:

By 1967, only 120 of these were initially combat-ready, but they did participate in the fighting in their unmodified configuration under the Israeli name of Magach.

The origin of this name is generally disputed with the most common theories being:

In addition to their own stocks, the Israelis also captured 100 out of 170 active Jordanian M48s which were then subsequently added to Israel’s own stocks. An unknown number of M48A3 tanks were purchased between the Six-Day War and the Yom Kippur War as well and here’s where Magach 3 comes in. 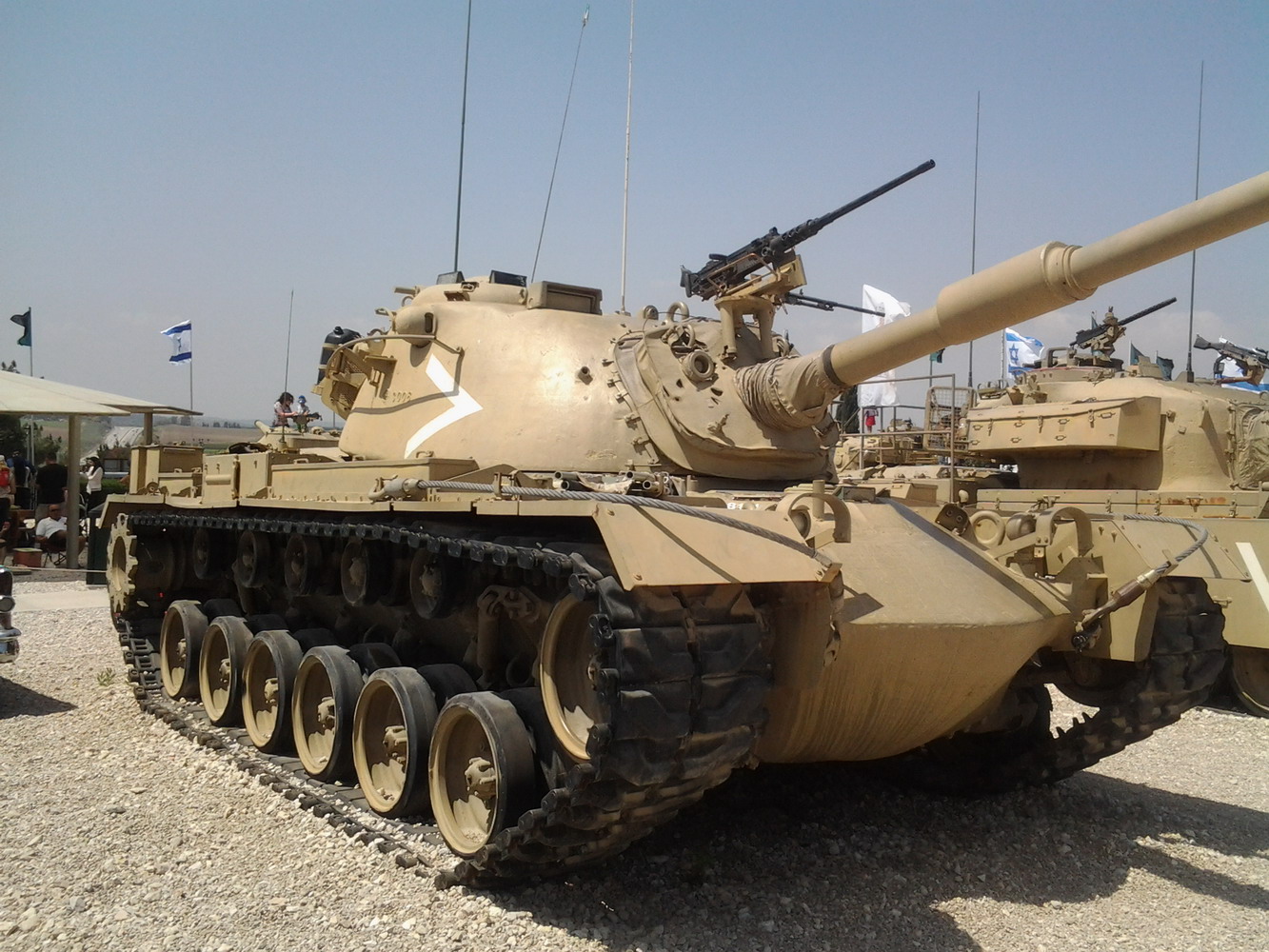 Between 1967 and 1973, all the M48 series tanks in service were upgraded to the Magach 3 standard. For the pre-M48A3 models, the 90mm main gun was replaced by the British 105mm L7 clone manufactured in Israel, the same weapons the Israeli 20pdr Centurions were upgraded with. This not only increased the firepower of this type of tank to the level appropriate for the era (by the end of the 1960s, the 90mm guns were obsolete to the point of Israel refusing to use the captured Jordanian M47s), but also unified the ammunition with the second major tank type in service, the Sho’t – logistics are always a serious consideration, especially in a desert.

The Magach 3 tanks were then also modified by:

By 1973, all 540 M48 series tanks, upgraded to the Magach 3 level, went to war alongside the modern M60A1s – and suffered catastrophic losses. The now infamous culprit was the hydraulic system fluid that, when hit, turned out to be extremely flammable, giving vehicle crews no chance of escaping. It was replaced by a non-flammable one shortly after the war but the damage was already made. Another major issue was the vulnerability of the tank to modern Soviet anti-tank missiles. Dozens of M48s were decimated by accurate Egyptian Malyutka ATGM fire. The research into this problem resulted in the adoption of the Blazer Explosive Reactive armor that was also installed on the later Sho’t variants.

But, there was also a question of replacements. The Israelis suffered terrible losses in the war – losses that were only partially made up by the American supply effort during Operation Nickel Grass. Some sources suggest that this effort was only approved by the American administration in power as a result of them learning that Israel was about to go nuclear (using their Jericho I missiles with nukes that were not supposed to exist). In short, it was an extraordinary situation and should another such major war occur, there was no certainty of it repeating itself.

A part of these loss replacements was the procurement of the latest M48 series tanks, the M48A5. In Israeli service, these became known as the Magach 5.

The M48A5 was basically a M48A3 MBT, upgraded to carry the M60A1 M68 105mm rifled gun. The idea to upgrade the Patton to the 105mm caliber was not new (after all, that’s what the M60 series was also for), but after the end of the Vietnam war, re-arming the older existing M48s received a higher priority level due to the abovementioned obsolescence of the 90mm gun.

The rapid development of this model can be also attributed to the Israeli 1973 experience and several of the upgrades installed on the M48A5 were directly drawn from the Israeli Magach 3 modifications. Its new low-profile cupola, for example, was based on the Israeli “Urdan” design.

The first five prototypes of this tank were tested between June and July 1975 and the conversions started en masse in October. Between October 1975 and December 1976, 501 M48A3 MBTs were converted to the M48A5 level.

Converting the even older M48A1s to the M48A5 level was even more difficult (67 component changes compared to 11 of the M48A3). The M48A1s were converted after the M48A3 conversion began and the production ran between August 1976 and March 1978. The production continued even afterwards and until December 1979, 2069 M48A5s were converted from the older M48 models.

The M48A5 was largely similar to the M48A3. It had a crew of four men, weighed 48.98 tons (some half a ton more than the M48A3) and its steel-only armor was of the same thickness as its predecessors:

It was powered by an AVDS-1790-2D diesel engine (producing 750hp) with Allison CD-850-6A transmission, allowing it to go as fast as 50 km/h. As was mentioned above, the main armament was the M68 105mm gun that fired standard NATO ammunition like the L7. The biggest upgrade compared to other 105mm tanks was the tank’s ammo capacity of 54 rounds. The gun could elevate to +19 degrees, depress to -9 degrees and could fire (with a skilled loader) 7 rounds per minute. Its Fire Control System included:

The Israeli Magach 5 model was also upgraded to use non-flammable hydraulic fluid and, later on:

Israel purchased 150 of these vehicles in 1978. Shortly after their introduction to service, they were retrofitted with the Blazer kit and were used for the first time in combat in Operation Peace for Galilee. Just like with the Centurion MBTs, the Blazer armor once again proved its worth against older Soviet ATGMs, protecting the vehicle almost completely unless vulnerable areas were not specifically targeted. 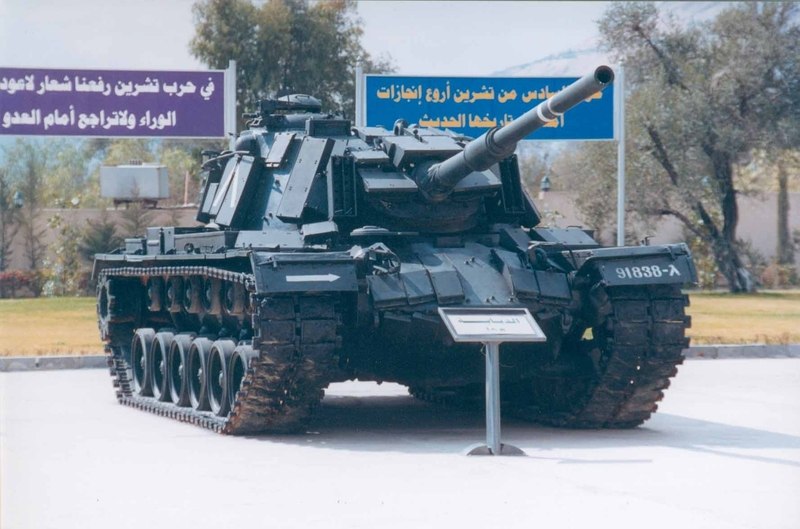 Starting from the mid-1980s, these were treated as second-line tanks at best and were gradually withdrawn from active service. Some were kept in reserve until the early 2000s but did not participate in any fighting.

In Armored Warfare, the Magach 5 will be an Israeli Branch Tier 4 Progression Main Battle Tank. Technologically, it will be more advanced than its American Tier 4 counterpart M60A1, putting it somewhere between M60A1 and M60A3 (it will have, for example, a thermal imager available) and making highly capable when it comes to firepower. It will be more accurate than the M60A1, will aim faster and will be a little stealthier.

It will also feature the Blazer ERA just like the Tier 3 Sho’t, significantly improving its protection against HEAT shells and early guided missiles. On the downside, its agility and mobility in general will be average at best and even with the added Blazer protection, its armor will be steel-only. Its gameplay should thus resemble the Tier 3 Sho’t as well as the IDF traditions – engage your target at long distances to achieve the best results!

Learn about a Tier 10 Israeli Main Battle Tank, coming to Armored Warfare during the first Season