When discussing the Israeli Sherman upgrades, there are two tanks that are commonly known under the name of “Super Sherman” – the older M50 and the vehicle that is going to be introduced to Armored Warfare as a Tier 2 Main Battle Tank – the M51. 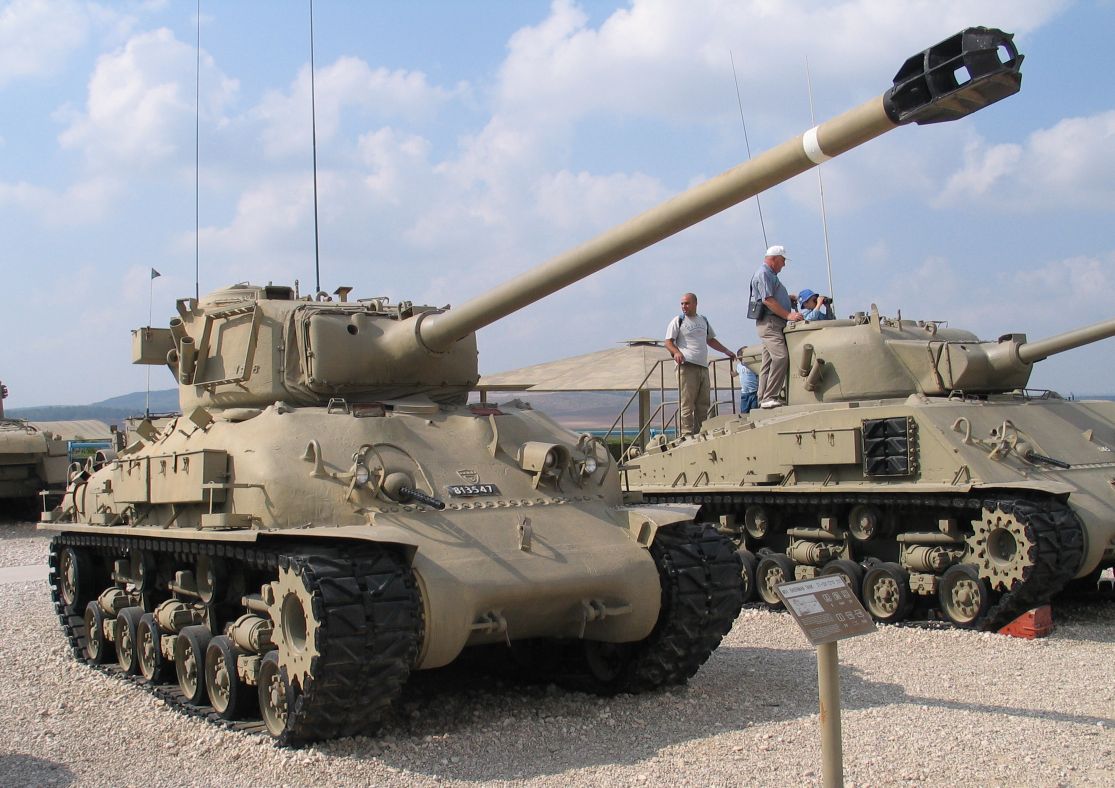 The story of the M51 begins where the M50 left off. After the end of Operation Kadesh (the Suez Crisis of 1956), the Arab armies were, once again, left bewildered and in disarray. Despite having at least as good armor as Israel and numerous forces in the field, the gamble of the Egyptian leader Gamal Abdel Nasser backfired with his units, including the armor, crumbling against the pressure Israeli forces exerted.

But after the shock wore off and the political consequences were dealt with, Nasser needed to rebuild and improve his shattered army and air force – and the Soviet Union was more than happy to provide a helping hand to such a strategic ally. Only this time, Egypt would not get just the T-34s – they’d also receive a far deadlier opponent, the T-54 Medium Tank.

That posed quite a problem for the Israelis. The M50 was roughly on par with the T-34/85, but was completely outclassed by the more modern Soviet vehicle. Syria received similar assistance, even though the Syrian armor was initially older and less numerous – the Syrians couldn’t afford as many vehicles as the Egyptians but large amounts of refitted World War Two German equipment was sold to Syria in the 1950s and 1960s (that’s where many post-war Panzer IV and StuG III photographs come from) along with a number of Czechoslovak T-34s. The 1958 political union between Egypt and Syria (an Egyptian hegemony rather than a pact of equals) also ensured that the next attack against Israel (as promised by the fiery rhetoric of Nasser and his followers) would come from both sides at once.

And, of course, there was the Hashemite Kingdom of Jordan – the most pro-western Arab country, but also politically the weakest in the region. Its armored forces, however, consisted of western-trained veterans and were equipped with British and American tanks. The Jordanians were never the fiercest opponents of Israel (in fact, in many cases, they were far more concerned with fighting other Arabs and limiting the Egyptian influence in the region), but would on several occasions be swayed to attack Israel along with Syria, Egypt and Iraq (and would pay the price for it). They too had to be considered potential enemies by the Israelis.

These problems were further underlined by the slow speed with which the Israelis were able to produce the M50s – between 1956 and mid-1961, only 100 Shermans were converted to the M50 level. Solutions were tested to upgrade the M50 combat value (such as the installation of additional armor), but, in the end, Israel once again turned to the French for help.

In 1961, a new upgrade program was started – the Israeli Shermans would, instead of the 75mm CN guns, receive a much larger 105mm cannon. This model received the designation M51.

The combination of a 105mm caliber cannon and a tank usually implies the ability to fire NATO standard full-bore ammunition, but this was not the case. Such a gun would not be usable in a Sherman turret, even with the extensions the French gave it. It was simply too large and too powerful for the chassis and the turret mount to handle. The gun had to be made shorter and the recoil had to be managed. As a result, the D-1508 was shorter and had reduced shell muzzle velocity compared to the 105mm CN-105 F1 used on the AMX-30 (915 m/s compared to over 1000 m/s of the F1 gun).

Despite this reduction, the gun was actually capable of firing the available French 105mm rounds (with the exception of the APFSDS round), specifically:

The gun was, once again, housed in a turret that was elongated to the front by the means of welded extensions and had a heavy bustle counterweight in the back that housed a radio and a ventilator. Several types of these bustles with minor differences existed.

The first M51s officially entered service in the July of 1962. Typically, sources claim that the M51s were modified from two Sherman models:

The exact extent of modifications is another matter. In the M50 article, we mentioned the M50 Mk.1 model (with original engine and suspension) and the M50 Mk.2 model (or “M50 Cummins” with the Cummins VT8-460 diesel and HVSS suspension) with the Mk.2 model produced roughly from 1960 onwards. 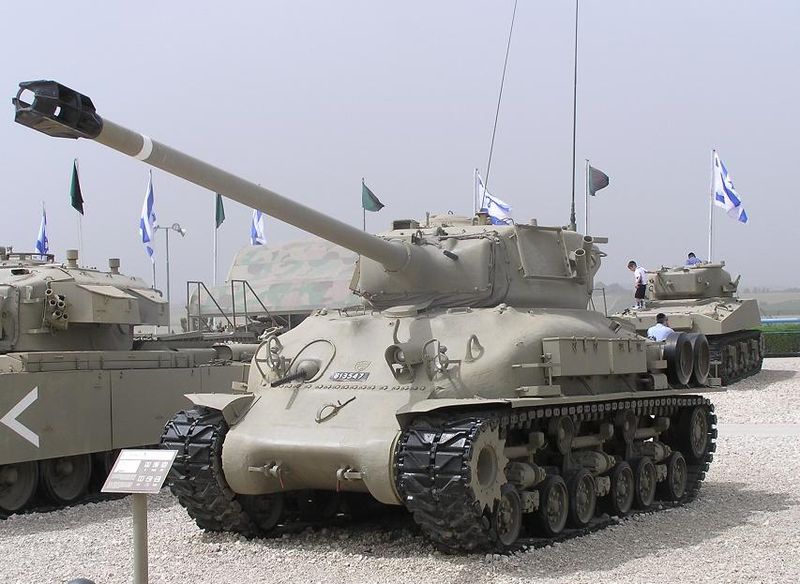 In most cases, articles about the M51 mention only one M51 model – the one with Cummins engine and HVSS suspension. In other words, there is no M51 Mk.1 and Mk.2.

However, based on several photographs, it seems that some early M51 tanks were fitted with their original engines and suspension and were only upgraded later. While interesting from a historical point of view, these M51s performed roughly the same (not counting the old component wear) and by 1965, all the M51s produced were likely converted to the “Mark 2” standard (or built that way from scratch).

Otherwise, the M51 was fairly similar to the M50 (and the older Shermans). It had a crew of five and all-steel armor. The 76mm turret called T23 had the following thicknesses:

The M51 weighed approximately 35 tons (slightly more than the M50) and was powered either by the 460hp Cummins engine or the original engine in the earliest cases (460hp Continental R975 C4 or 500hp Ford GAA). The maximum speed was likely roughly the same as that of the M50 or the original Sherman (40 km/h).

The M51 served in two major conflicts – the Six Day War and the Yom Kippur War. However, despite its upgraded cannon, the tank was considered to be obsolete in both conflicts and by 1973, it was mostly replaced by modified Israeli Centurions and Pattons.

The idea that it performed truly well at long distances even against Arab T-62s is mostly a myth that is likely based on the fact that Israel managed to defeat the invaders in the first place against nearly insurmountable odds.

In reality, the M51 was used at that point simply because there weren’t enough modern tanks to replace and struggled, forcing the Israeli tankers using them to close in and target enemy vehicle weak areas such as sides and the rear, significantly increasing the Super Sherman losses. The state of the Israeli military in 1973 had a number of reasons, including the stunning Six Day War victory that led to complacency, corruption in the ranks of the IDF and overreliance on the Israeli Air Force at the expense of ground units.

The devastating Yom Kippur war was a huge wake-up call for Israel and resulted in frantic improvement. The M51s that survived the war were essentially phased out, although some were left in reserve until as late as the early 1990s.

A number of these vehicles were sold off to Chile from 1979 onwards. Chile had the older M50s and possibly some of the M51s upgraded with a 60mm HVMS cannon specifically for them to be able to defeat tanks such as the T-62. 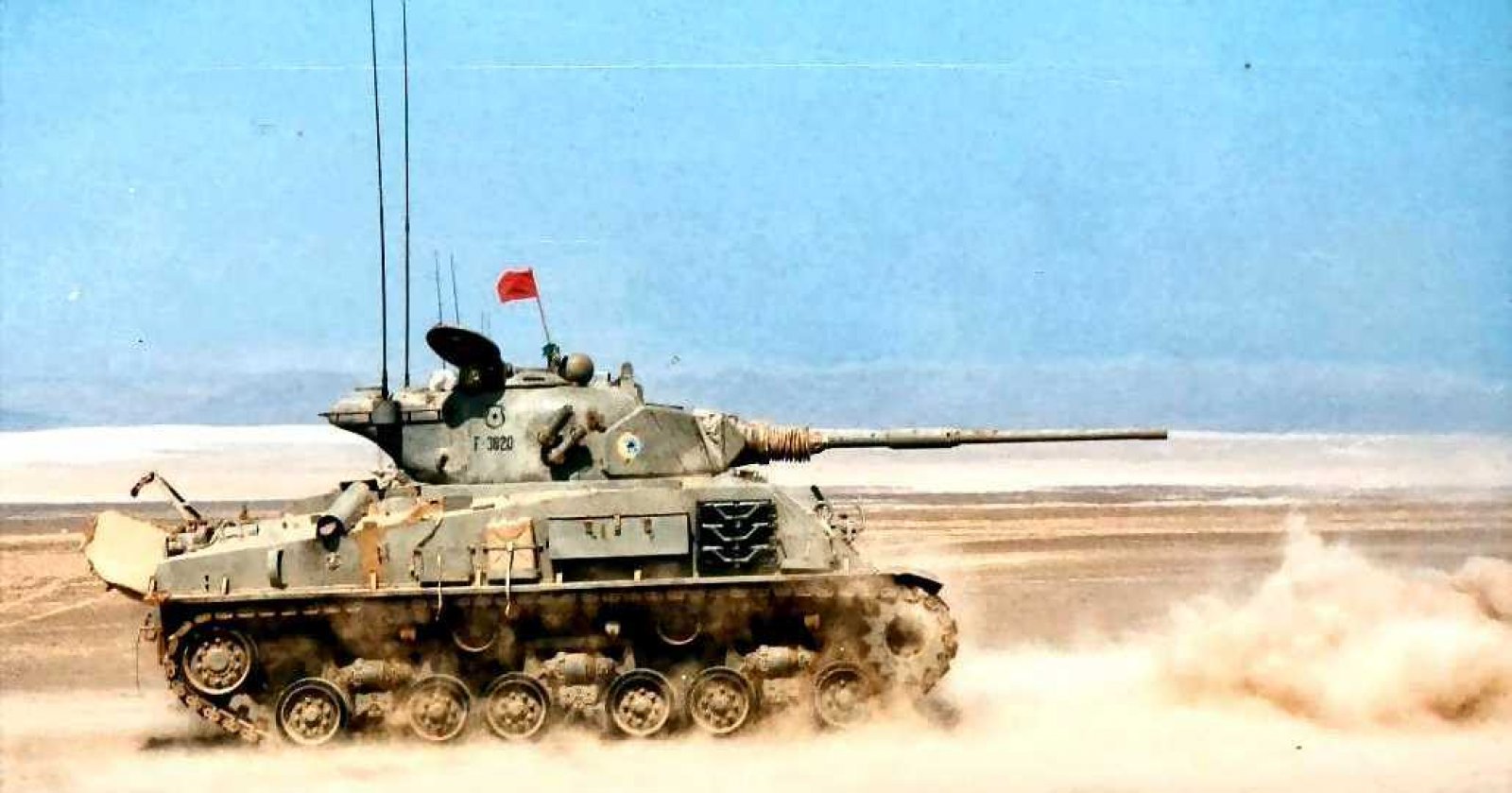 The Chilean 60mm M51s (sometimes incorrectly referred to as M60) also had a new engine by Detroit Diesel (it’s unclear whether the new engine was a part of the initial conversion or was added afterwards). It’s worth noting, however, that the other South American Shermans armed with a 105mm gun, such as the Argentinian Repotenciado, are not of Israeli origin and were converted by the French.

In Armored Warfare, the M51 will be a Tier 2 Main Battle Tank of the upcoming Israeli dealer. Much like its Tier 1 predecessor, the M50 will have mediocre mobility and armor, but also a large gun for its Tier (the largest, in fact) capable of dealing tremendous damage per shot thanks to its HEAT shells.

We hope that you will enjoy playing it and will see you on the battlefield!

Learn more about the additional mechanics changes that will appear in Update 0.26