The Merkava Mk.4M (or Mk.4 Meil Ruach, which stands for “windbreaker coat”) is, simply put, a Merkava Mk.4 with a Trophy hard-kill APS installed on it. For more information about Merkava Mk.4 history, please visit the article dedicated to it. 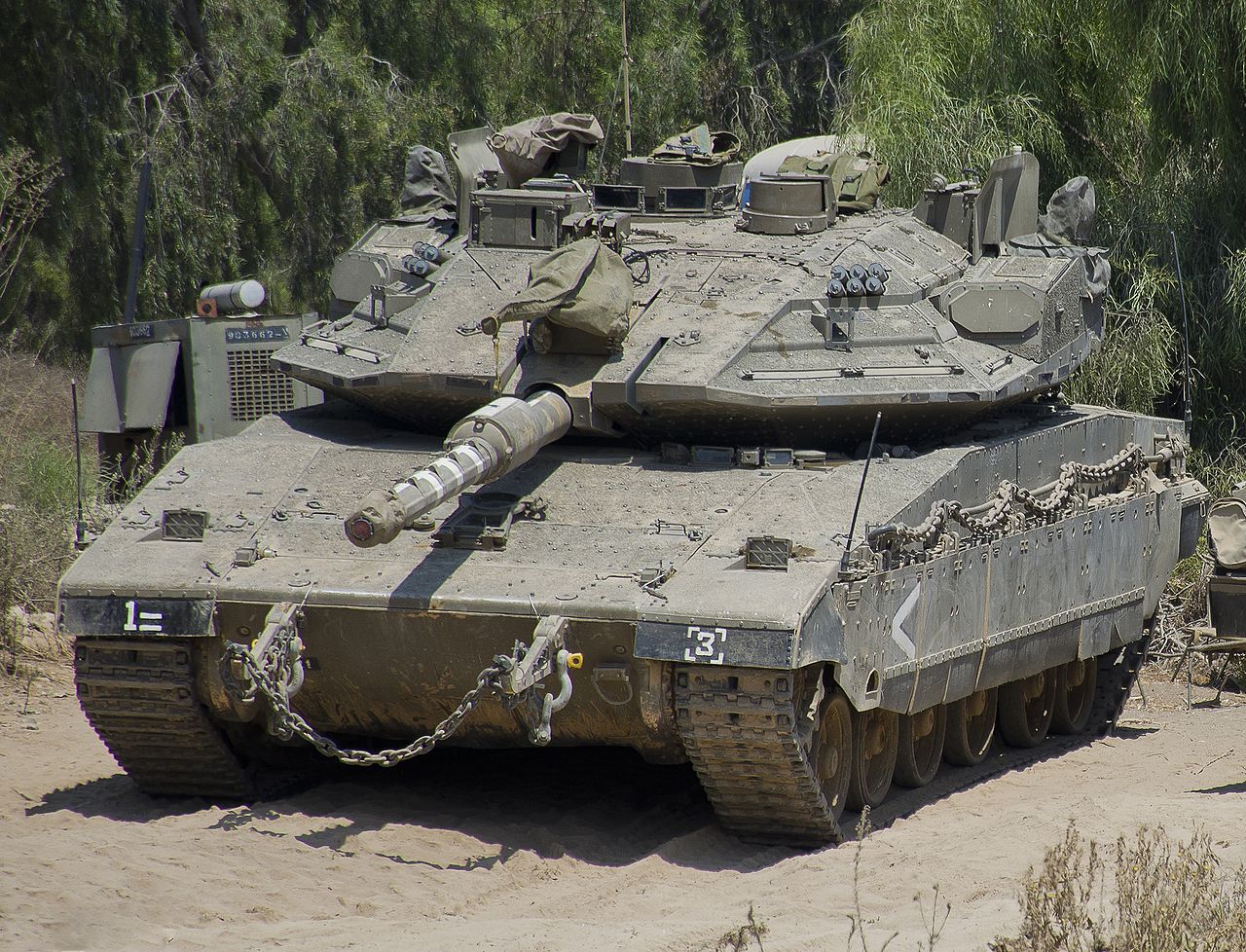 The development of this variant started around 2007 as a response to the ever-increasing threat of ATGMs, especially the deadly Russian Kornet that, apart from being used by Hezbollah, also started to appear in the hands of Hamas, a Palestinian terrorist organization.

While the cutting edge armor of the Merkava Mk.4 provided considerable protection against all threats, further improvements were needed. But the thing about armor is – you can only have so much of it before the tank starts becoming really heavy and Merkava Mk.4 definitely fell into that category with its weight reaching approximately 70 tons. Alternative ways had to be found to increase the protection levels against missiles and RPGs (the anti-tank weapons deployed the most in asymmetric warfare apart from the IEDs). Installing an APS was therefore the next logical step.

Before we delve more into the Trophy upgrade, a few words about hard-kill active protection systems in general.

Active Protection Systems are based on the idea that the best way of protecting an armored vehicle is to not let it to get hit in the first place. There are two basic kinds of APS, both detecting the incoming threat via radar and then acting upon it – soft-kill APS and hard-kill APS.

The soft-kill APS are various emitters that confuse the guiding mechanism of guided missiles. They operate at longer distances and basically make the missile miss. There are serious drawbacks to this approach – whether the system works or not depends on the missile and it doesn’t work against HEAT projectiles with no guidance such a RPGs.

The hard-kill systems are, on the other hand, designed around the idea of destroying the enemy projectile before it reaches the vehicle by hitting it with something – for example fragments from your own controlled projectile explosion. Here, too, the challenges are clear:

On the bright side, such a system is capable of defeating RPGs even at close ranges if using advanced enough components (it really boils down to reaction times). 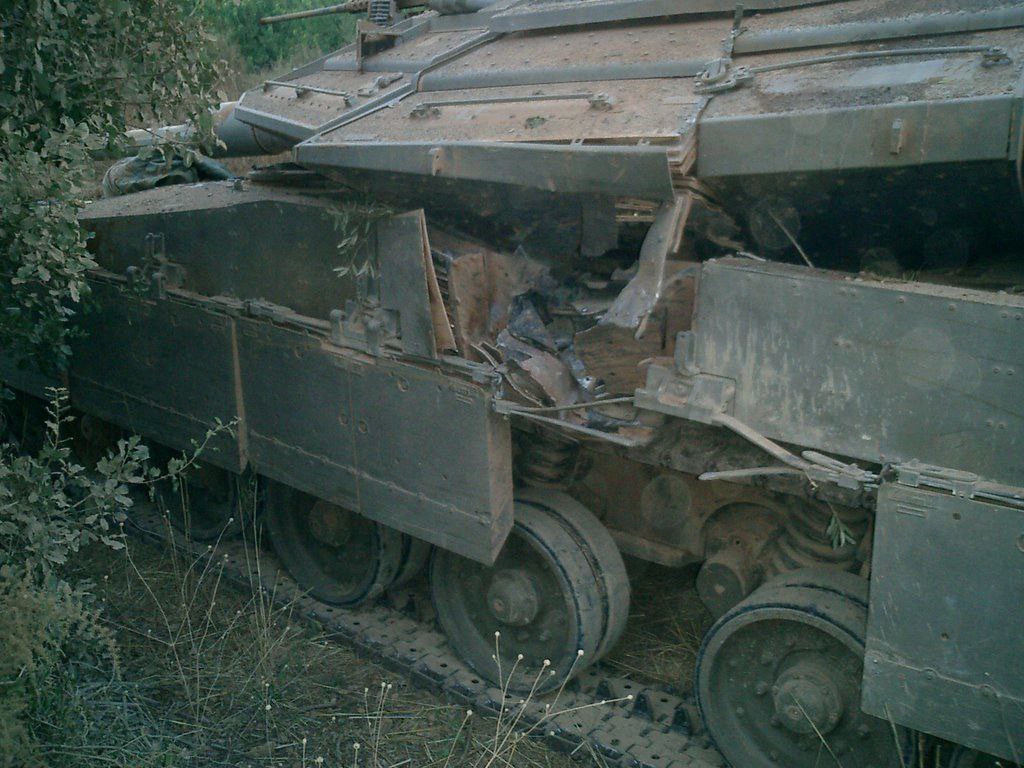 Merkava hit by a Kornet missile

Such a system might at first sound like science fiction – especially to someone previously interested in Second World War technology, but the idea itself is actually quite old. The Soviets were the first ones to build and field a hard-kill APS with their Drozd system. The development started in 1977 as an upgrade program for the older T-55 and T-62 tank series. Naturally, with the Soviet technology of the 1980s, the Drozd was slow to react, had a minimum range of some 250 meters from the vehicle and was horribly dangerous to any people or soft vehicles in the blast zone. It was also really expensive and that was basically the end of it but prototypes were built and have allegedly also seen combat in Afghanistan.

The West, of course, had the same idea and other systems were tested but the real development only started to happen in the late 1990s and the early 2000s but the proliferation of such systems was – and is – slow due to their inherent issues (mostly cost, but also performance, reliability and safety). Currently, there is only one hard-kill system that’s not only mass-produced, but also tested in combat – the Trophy APS.

The Trophy (also called Windbreaker or ASPRO-A in Israeli service) was developed in the early 2000s by Rafael and Elta from the IAI group. There are several variants in existence with the one installed on the Merkava being the heaviest one (weighing full 850kg). It’s a hard-kill system consisting of two boxy launchers (one per side, each loaded by a three-round automatic loader). The launchers rotate and turn towards the thread based on the data provided by their guiding radar. In theory, each of them can rotate full 360 degrees but in reality their arc is limited to some 200 degrees due to the blast shield installed behind each launcher to protect the crew of the tank.

The Trophy system doesn’t fire rockets against the incoming projectiles – instead, it launches “shotgun blast” of 35 small explosively formed penetrators, a rather unique solution. Below the blast box countermeasure is a set of two radar panels for the Elta ELM-2133 Windguard Pulse Doppler radar. The best thing about the Trophy system is that it actually works reliably (unlike some experimental western APS sets) – it can deal with incoming guided missiles and RPGs quite effectively. Sources vary on whether it can actually deal with incoming tank HEAT and HE shells but it likely can. It’s also reasonably cheap. 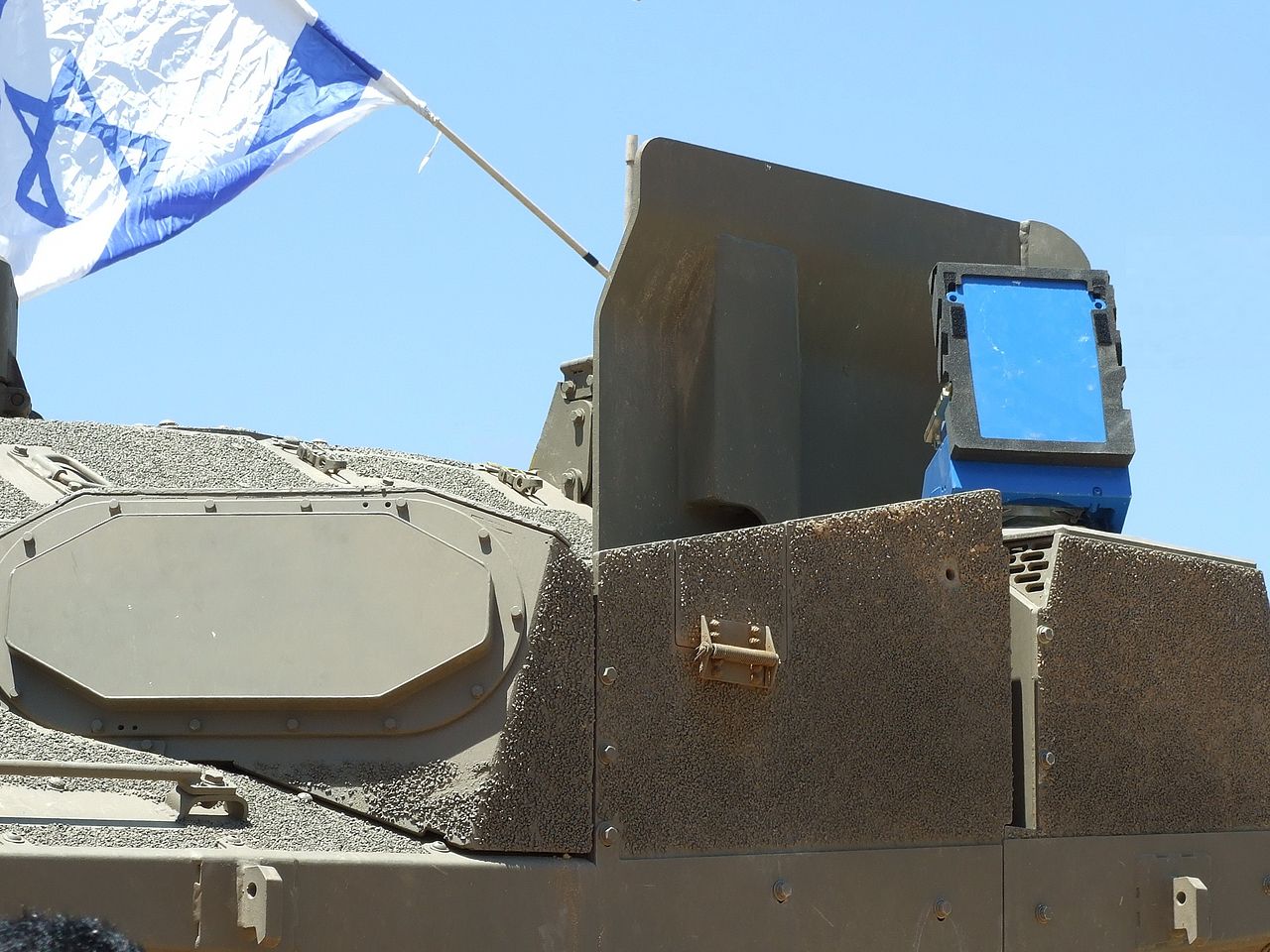 It does have some drawbacks though.

The biggest one is the blast radius of the Trophy – being hit by a blast of red-hot Trophy projectiles is not good for your health. At the time of its introduction, this was a serious problem that the IDF dealt with by adjusting the tactics for the infantry accompanying tanks – simply put, the soldiers have to move behind the Trophy tanks and any army seeking to adopt the Trophy (like the Americans that originally rejected it for this very reason) must do the same. Secondly, Trophy reload time is quite long for an APS (some 1.7 seconds) and its charges are limited – this creates a gap in protection and multiple RPGs fired from the same direction may succeed in getting through.

Regardless of these issues, the Trophy system is alive and well with its development ongoing. The Trophy-equipped Merkava Mk.4 tanks have already seen combat, especially during the 2014 Operation Protective Edge where the system intercepted a large number of enemy RPGs and even guided missiles – the exact number is unknown (some sources claim around a dozen successful interceptions while others claim more than three dozen) but one thing is for sure – no Merkava Mk.4M has been lost in combat to this date.

In Armored Warfare, the Merkava Mk.4M will be a Tier 10 Progression Main Battle Tank and the ultimate vehicle of the Israeli Branch.

On Tier 10, many MBTs have its own niche. The Abrams is all about being universal and okay in any situation, the Challenger 2 ATDU is about the thickest armor possible and so on. Mk.4M’s specialty will be active protection. The armor will be relatively thick and the tank will have the most hitpoints of its Tier, but it will also feature a very special upgrade – the “next generation Trophy” APS capable of intercepting all kinds of shells, including kinetic ones. 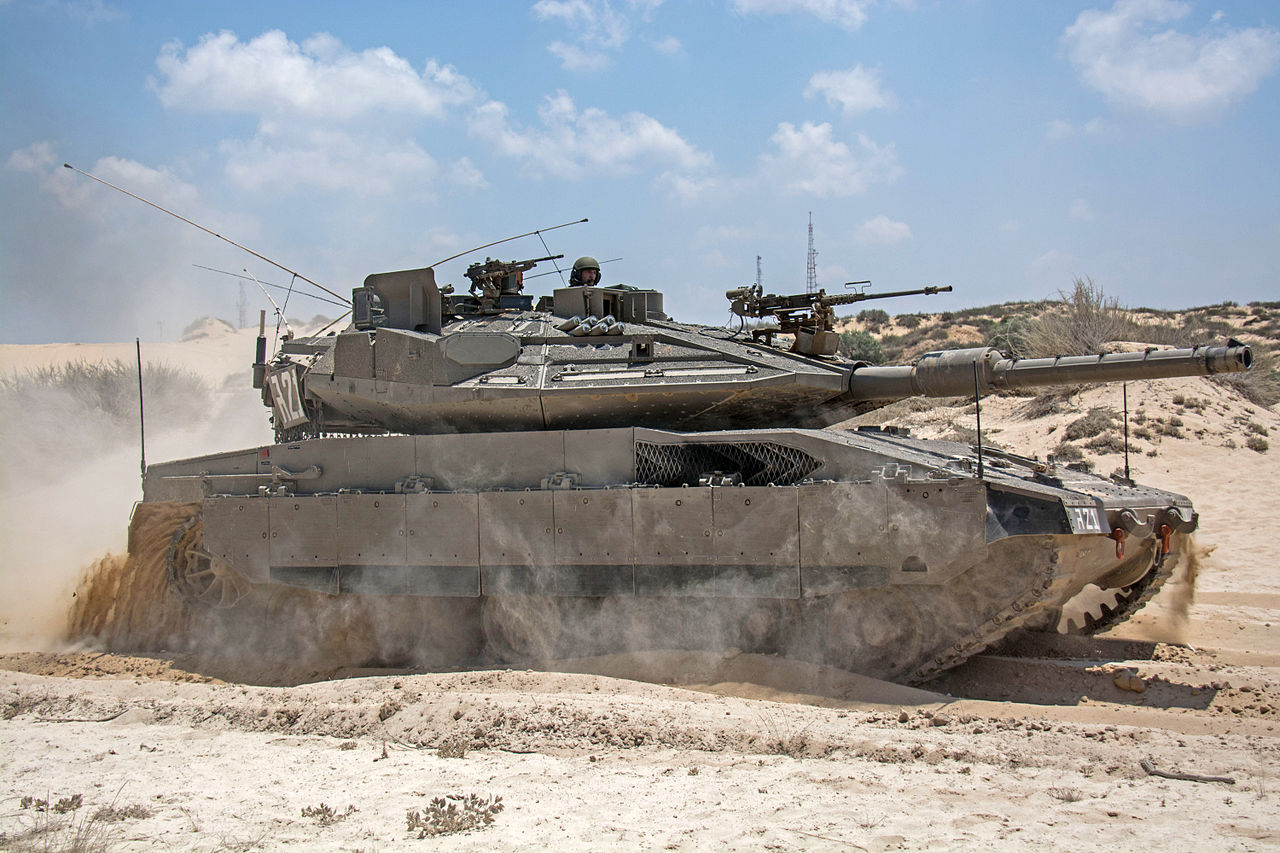 The ability to intercept APFSDS penetrators is not something out of this world – at least not completely. The idea is not to destroy the flying penetrator rod – it has far too much energy for anything to do that, but rather give it a little nudge in order for the flying arrow to tilt and not impact precisely with its tip – just a few degrees are enough to significantly reduce its penetrating capability. According to certain sources, tilting the rod by 10 degrees reduces its penetrating capability by 50 percent.

What’s more – a system that can successfully intercept kinetic rounds is, allegedly, already built and tested – the AMAP ADS by a German company called IBD Deisenroth. The key word here is, however, “allegedly” – given how classified the entire system is and how close to the target it actually intercepts the enemy projectile, there are considerable doubts that this is actually true. The biggest challenge of defeating kinetic rounds is, naturally, their extreme velocity – 105mm ammunition can generally be intercepted at over 500 meters with existing technology (given their velocity of some 1600 m/s) but modern 120mm penetrators fly faster than 1800 m/s.

Regardless, the IMI, Rafael and IAI have already stated their intention to develop the Trophy APS further and integrate some Iron Fist (another Israeli APS, rejected in favor of the Trophy) elements to it to allow it to indeed intercept kinetic shells. Whether this is turns out to be realistic or is just a marketing ploy or wishful thinking remains to be seen.

In Armored Warfare, we’ve decided to take the liberty to introduce this next generation Trophy system as a “what if” design – after all, the game takes place in the late 2030s and the early 2040s. One could say we have a lot of faith in the skills of Israeli military industry developers. 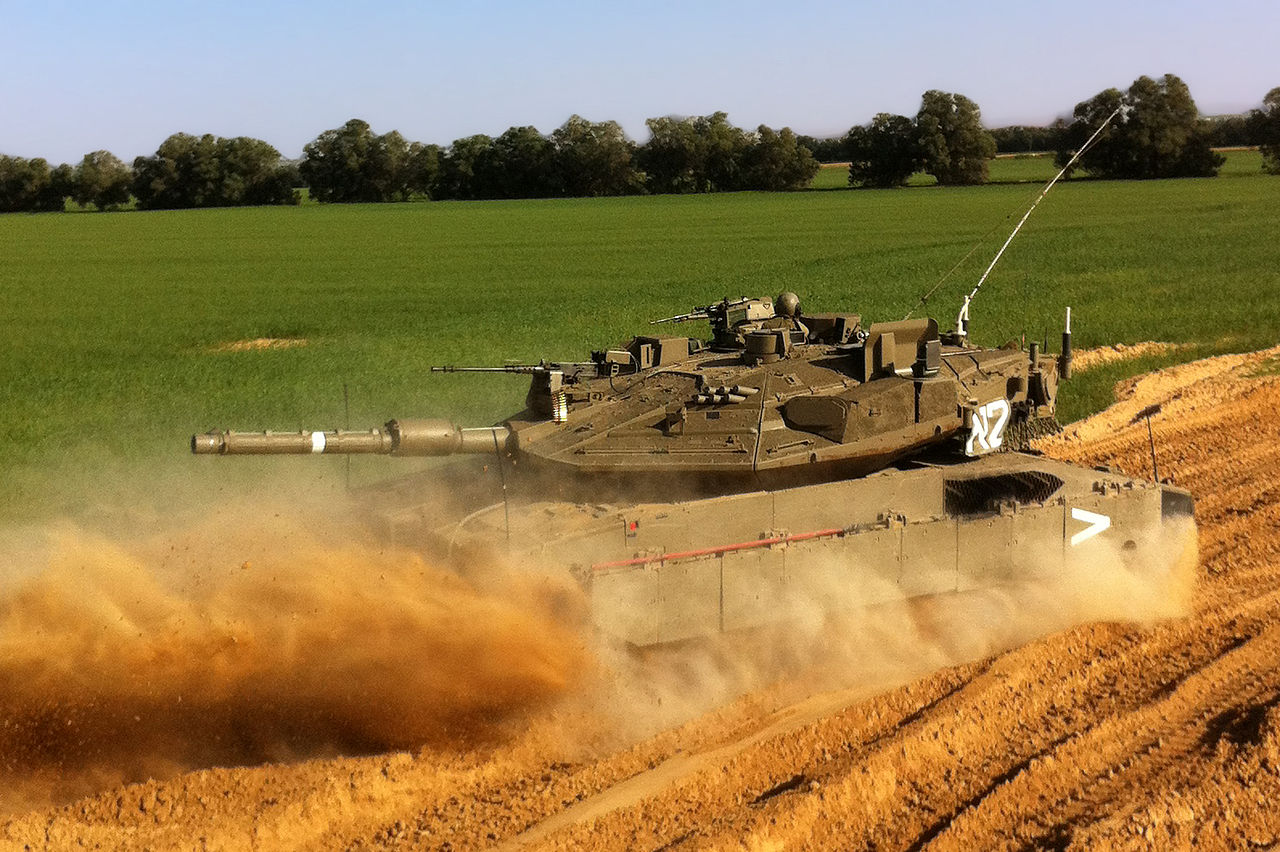 As for the rest of the properties of the vehicle, it will be a typical Merkava featuring:

The Merkava Mk.4 will, generally speaking, not be a close combat tank – it will be most comfortable destroying its enemies at distance while being protected by its thick turret armor and advanced APS. Faster tanks will be able to outmaneuver it but when played well, it will be possible to dish out incredible damage. But do not worry; even at closer distances the tank will be viable, making it one of the most new-player-friendly high-Tier vehicles in the game.

Learn about a Tier 5 Israeli Main Battle Tank, coming to Armored Warfare during the first Season

Learn more about the possibility to view vehicle armor in details, coming in the Black Sea Incursion season