One of the most interesting, but poorly documented, periods of tank warfare is the 1948 Israeli War of Independence, in which – against all odds – a newly established country prevailed against numerous and well-equipped enemies. Catastrophic British post-war policies in the region led to an escalation of the conflict into an all-out war that included air force clashes as well as armor.

From a tank research point of view, this particular conflict is quite interesting because it involved a huge variety of armored vehicles of various ages, including some real relics of the past, such as the Hotchkiss H39 (re-armed with a 2pdr gun in Syrian service) and the Renault R35, both pre-war French light tanks from the 1930s. 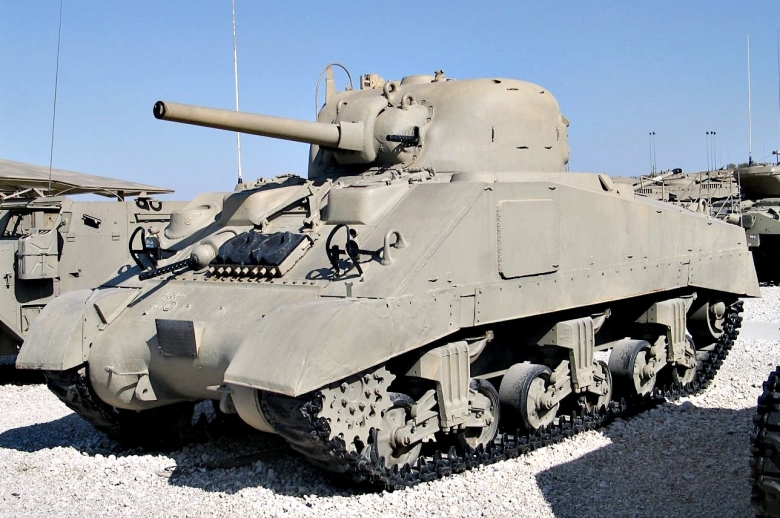 Israel used a wide variety of both purchased and captured vehicles too, but the tank that would remain one of the mainstays of the Israeli armored units was the M4 Sherman.

The M4 Medium Tank is possibly the best tank from World War II alongside the Soviet T-34. The excellent firepower of the 76mm gun-equipped later models, combined with good mobility and the solid protection it offered its crew, made it a popular and successful vehicle. Although it was replaced in American service by the Pershing/Patton tank series after the war, many Shermans were purchased by other countries and used for decades in some cases. The heavily modernized Chilean Shermans served until the 1990s!

By 1948, the nascent Israeli military lacked pretty much everything. While the small arms situation was immensely helped by imports from France and Czechoslovakia, armor remained a problem for years after the conflict. An often repeated theory is that all the early Israeli Shermans came from Italy, but this is not quite true.

The very first Sherman in Israeli Service was an M4A2, powered by a diesel engine that was already in Palestine. It was essentially a wreck, left behind by the retreating British in a repair depot near the city of Tira. The tank originally belonged to Royal Wiltshire Yeomanry, a tank unit that received these vehicles after the losses in the famous Second Battle of El Alamein. The unit remained in the Middle East until 1943, when it departed and left this vehicle behind. After that it rusted for five years in a shed before the ingenious Israeli restored it to working order. The vehicle was armed with the standard 75mm M3 gun and was named “Meir”. 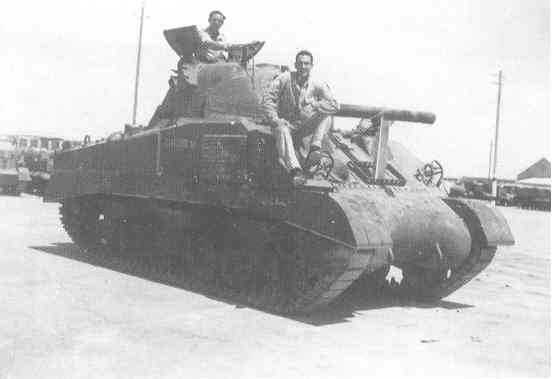 One of the earliest Israeli Shermans

The final fate of “Meir” is unfortunately not known – it survived the Independence War (and so did at least one of its original crewmembers, a Canadian by the name of Lionel Druker), but what happened to it afterwards remains a mystery. Several sources claim it was converted into a self-propelled gun.

The "Italian" Shermans were a result of an Israeli initiative to obtain more armored vehicles from Italy for the 82nd Tank Battalion. A team was sent to look for suitable tanks and 32 M4’s armed with 105mm howitzers were purchased. The tanks were still in serviceable condition. A bigger problem was the fact they were demilitarized: the guns had their barrels destroyed to prevent them from firing.

Wrecks from which the first Israeli Shermans were built

The first ten tanks arrived in Haifa – without functional weaponry – in November 1948 and were immediately stripped down for maintenance. The rest were sent in two more shipments and arrive in November 1948 and January 1949 respectively. The 105mm guns could in most cases not be repaired and Israel had to look for suitable armament elsewhere.

A solution was eventually found. The Israelis purchased 50 Krupp field guns from Switzerland in September 1948 – originally they had been intended for field artillery service, but the technicians converted them to serve as tank guns. Unfortunately, the conversion was far too complicated and the “Krupp” Shermans were only ready in April 1949, too late to actually see combat during the War of Independence. Luckily, there were other options.

Three functional 75mm M3 tank guns were purchased from Italy and brought to Israel just in time for the three M3 equipped Shermans (along with one Cromwell) to participate in Operation Horev, the successful December 1948 Israeli push against the Egyptians in the western Negev desert. Amongst the three Shermans was the vehicle nicknamed “Tamar” after one of the technicians caring for it, widely recognized as the “first Israeli Sherman” instead of “Meir”. “Tamar” unfortunately became the first Israeli Sherman ever lost in combat as it was knocked out and abandoned near El Arish.

It is unclear how many Shermans were actually used during the War of Independence. Most likely none of the “Krupp” Shermans made an appearance, although some sources state that as many as 14 Israeli Shermans were active during the war. By the time the war ended, however, it is known that Israel was in possession of 32 of the 33 Shermans it had during the war (the “Italian” and “Meir”), with only one Sherman lost in battle (the “Tamar”). 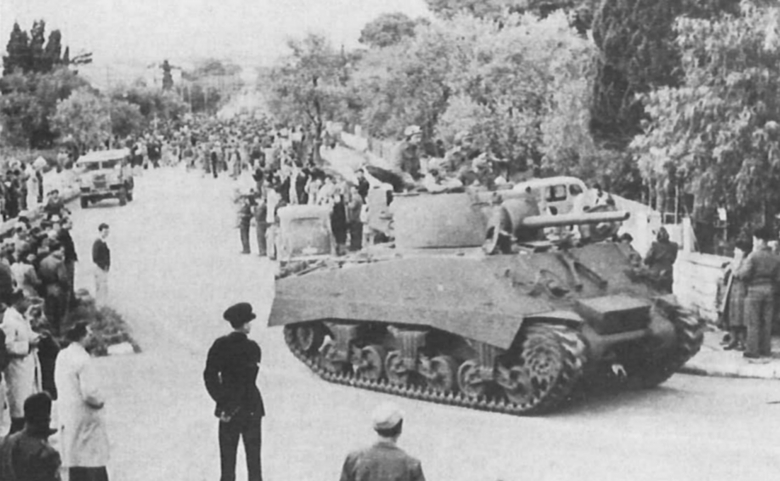 "Tamar" during a parade

These vehicles would form the mainstay of the Israeli Defense Force's armored units (the 82nd Tank Battalion of the 7th Armored Brigade). Shortly after the war, the "Krupp" Shermans were all re-armed with more recently acquired M3 guns and a number of additional Shermans were purchased from the Philippines. These formed an odd mixture of various Sherman features, including some very peculiar conversions, such as the M4A4s (originally powered by the Chrysler A57 Multibank monstrosity) with their engines replaced with Continental R-975 radial engines from the early M4s. These conversions were not made locally but rather purchased, most likely from France.

Israeli Shermans in 1950s during a parade

But this would not be enough. Israel was well-aware that its enemies – Syria and Egypt in particular – were still bitter from the defeat and were purchasing modern equipment of Soviet origin in order to prepare for another attack. As a consequence, Israel opted to start purchasing 76mm Sherman variants in early 1956 (specifically the M4A1 (76) W and M4A3 (76) W models). These "long-barreled" Shermans were officially designated M1 Super Sherman (this name originally belonged to the M1 model, not the M50 or M51 as is commonly claimed). The 75mm Shermans were re-designated to M3 afterwards. Both the M1s and the M3s participated in the 1956 Sinai war and would continue to serve for years to come.