The currently produced Merkava Mk.4 is the newest model of the tank. Visually, it might not look all that different from the older Mk.3 model with upgraded armor (the production of which ended in 2002) but make no mistake – the Mk.4 is jam-packed with advanced technologies, truly bringing the vehicle to the 21st century.

The development of the Merkava Mk.4 started around 1999 as, arguably, the first major variant of the Merkava optimized not only for standard large-scale battlefields, but also for limited asymmetric combat. That doesn’t mean the tank isn’t great by itself – it’s certainly capable of going toe to toe with the best armor its potentially hostile neighbors are using. But with the never-ending conflicts with terrorists, the Israelis realized that the Merkava would often be used in counterinsurgency operations.

What this meant was that the standard approach was no longer truly viable. Fighting well-armed terrorists meant going up against three types of major threats:

As any tank designer would tell you, this was a serious challenge. Tanks are generally built for conventional warfare – what that means is maximizing their frontal protection (roughly in a 60 degrees angle from the vehicle axis) at the cost of side and rear armor. Insurgents, however, are capable of striking from any angle – especially RPG and ATGM teams are difficult to detect until it’s too late and can wreak enormous damage on tank formations attempting to penetrate deep into a city (as the Russians learned the hard way in Grozny). Therefore, the requirement on the Merkava Mk.4 design was to offer as much protection from all angles as possible.

The basic protection of the Mk.4 resembles the Mk.3D with upgraded composite armor, giving the turret that distinctive late Merkava softer “pancake” look, replacing the older sharp wedges. As with the older Merkava, the armor does not feature integrated ERA blocks although some sources claim otherwise. There are, however, some confirmed additional upgrades.

For one, the roof armor was made much thicker in order to protect the crew against the abovementioned top attacks. In fact, it’s so thick that the commander’s cupola can’t be easily opened manually and the hatch has to be supported by an electric motor.

Secondly, there are the even thicker composite side skirts. They are massive and designed to protect the vehicle not only from such threats as RPGs, but also from roadside explosions. Naturally, there’s only so much you can do to shelter the crew from harm and if a tank runs over a 100kg explosive charge that explodes, no amount of extra armor can save it, but such bombs are costly and difficult to both produce and plant – statistically, the vehicle was made much safer against the most common types of IEDs.

There are several models of these side skirts being deployed, some with the last section replaced by a metal grille, likely to reduce weight and to prevent dirt kicked up by the tank from accumulating behind the skirts, a common problem of such designs. Finally, some vehicles had their skirts (as well as side armor) covered by a special type of cloth to reduce the tank’s heat signature.

Other protective measures include:

But defense is just one part of the equation. Mk.4’s offensive upgrades are equally important – and the tank has plenty of those. 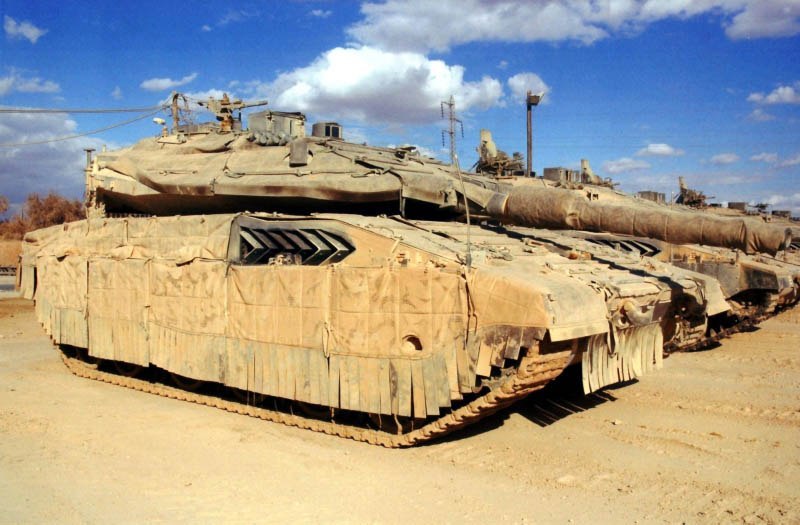 Coordination and situational awareness is now more than ever a critical part of success on a modern battlefield. The Merkava Mk.4 MBT is fitted with an advanced battlefield management system that is capable of syncing with other units using it, creating a global battlefield map available to all Israeli commanders. In a fight where there are no clear battle lines, this is a crucial upgrade – the commanders can see the position of all enemy units and may choose to flank them or just bypass them altogether.

As for the main weapon system, the Mk.4 retains the 120mm L/44 smoothbore – the Israelis found it to be quite sufficient for the job the tank is supposed to do. That doesn’t mean they didn’t look into various other options – there are rumors going around for years that, in the 1990s, the Israelis were considering upgunning their tanks with a 140mm gun (likely the type developed by RUAG in Switzerland) but the disadvantages of such an upgrade (weight, incompatibility, general bulkiness and the lack of actual need) deterred them from it. After all – if all your neighbors use 1980s MBTs at best, why bother when there are more efficient (read: cheaper) ways of taking care of your problem.

That’s not to say the 120mm MG251 IMI smoothbore wasn’t upgraded – a different breech and recoil mechanism was added to it, allowing it to withstand greater pressures and thus fire more powerful ammunition. This improved version is known as the MG253. It is paired with a semi-automatic 10-round magazine – the loader still has to insert the round manually into the gun, but this electric drum-like rack makes it much easier to do so.

The gun is controlled by an upgraded version of the Barak Zoher FCS by Elbit (sometimes referred to as Tadir or Knight Mk.4) featuring a better thermal imager, improved monitor screens for the commander and the gunner and an upgraded Hunter-Killer feature from the Mk.3 version. The target tracking was improved as well. Both the gun and the commander and gunner sights are, of course, fully stabilized. It’s also worth noting that the tank can fire LAHAT gun-launched guided missiles as well as standard kinetic and multi-purpose rounds.

All these upgrades led, once again, to a major weight increase. Depending on the source and configuration, the Merkava Mk.4 is said to weigh up to 70 tons, a value that would put serious stress on even the improved 1200hp AVDS-1790-2AR engine of the Mk.3 model. That is why the old AVDS series was finally put to rest and was replaced by a German power pack – the 1500hp MTU MT883 diesel paired with a Renk RK325 five-gear automatic transmission (or its locally license produced version). This upgrade allows the tank to retain its mobility with the maximum speed reported to be as high as 70 km/h by some sources. Its off-road speed would be somewhere between 55 and 60 km/h. The history of the power pack is somewhat interesting and unclear – some sources claim that it was shipped directly from Germany, while other sources claim it’s in fact an American licensed copy produced by General Dynamics under the name GD883.

The suspension was upgraded as well with the all-steel roadwheels of the Mk.3 model replaced by rubber banded ones. But those aren’t just any ordinary rubber-banded wheels – the rubber can withstand temperatures of up to 300 degrees Celsius, making them very durable.

In summary, what the Israelis had built was one of the best tanks of the early 2000s that was, more than anything, perfectly suitable for the role they required it to perform. The only real downside of the vehicle was that even after all that time spent on setting up Merkava production in Israel, 30 percent of its components still had to be imported from abroad. Even today, this occasionally turns out to be a problem – initially, for example, the Germans allegedly delayed the delivery of the MTU powerpacks for political reasons (specifically, the unhappiness with how the Palestinian issue was being handled by Israel), delaying the production. This example – if true, as everything connected to Israeli tanks is usually shrouded in secrecy – would suggest that at least the original power packs were delivered directly from Germany.

The Merkava Mk.4 is being produced to this day with perhaps 600-700 in service. Despite some vague hints, it was likely never really offered for export and remains in Israeli service only. There were some reports of it being offered to Colombia but this was likely nothing but a speculation – Israel is generally not keen on offering its cutting edge tanks abroad, as demonstrated by an episode where they (in all seriousness) recently offered the Sabra (which by itself is basically an upgraded M60A3) as a replacement for the aging Czech Army T-72M4CZ MBTs, much to the surprise (and amusement) of the Czech military.

The tank has seen plenty of combat though. The first conflict where it would be deployed was the 2006 Lebanon War against Hezbollah units. Politically, the war was a mess that ended in a stalemate of sorts- The Israeli tanks performed well enough but the IDF lost (amongst the five tanks lost in total) two Merkava Mk.4s – one was destroyed by a massive IED and one was knocked out by a Kornet missile (Hezbollah, on the other hand, claimed over a hundred Kornet tank kills). 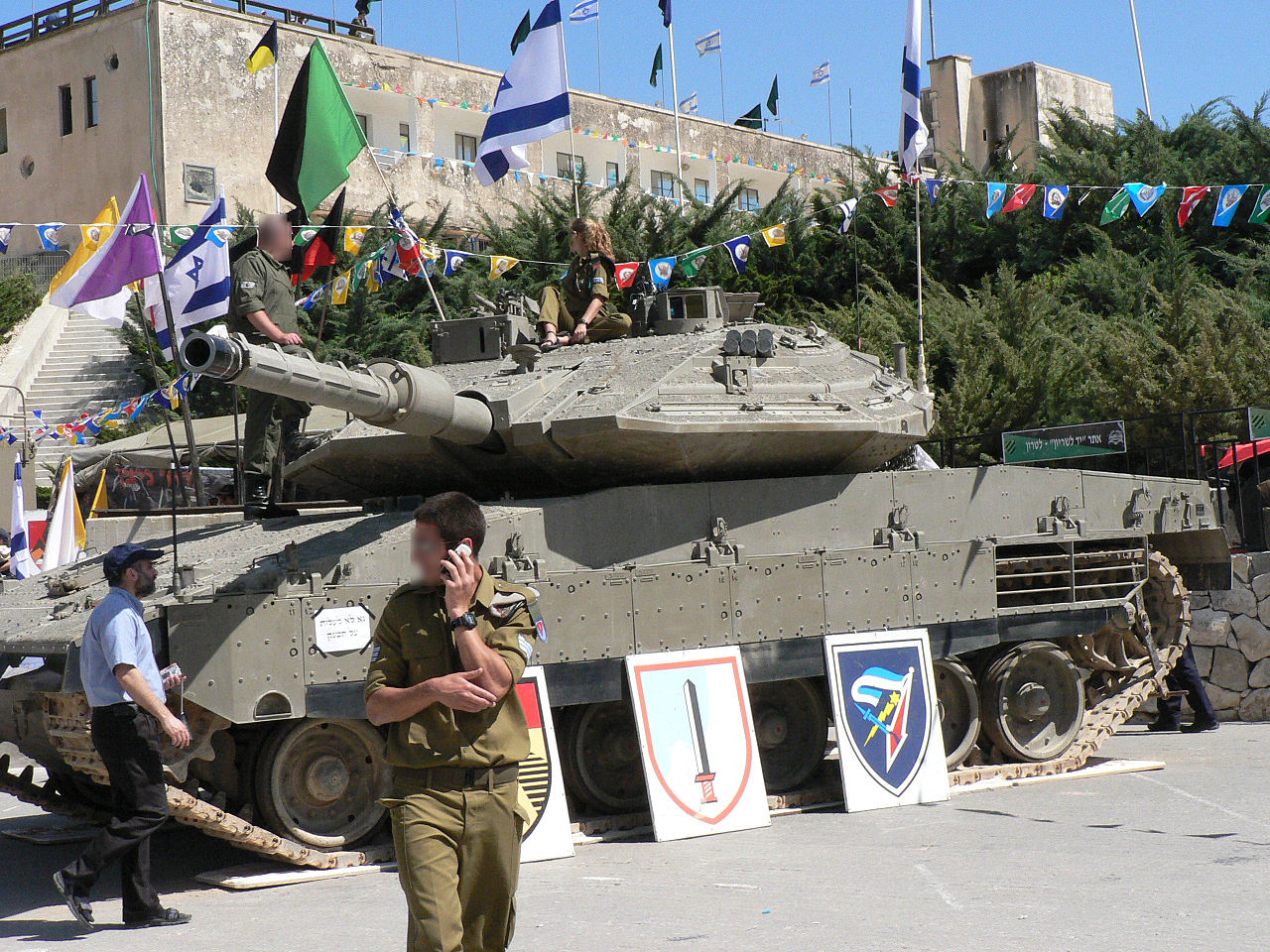 As was mentioned above, massive IEDs are basically something no tank can be protected against – pile up enough explosives and the force of the blast will kill the crew no matter what. The Kornet penetrations were, however, troubling despite the IDF attributing the loss to poor training rather than to the tank itself. Following the war, there were some claims of these reports being overstated and – statistically – the Israeli tanks performed really well, even some of the older ones. But, when all was said and done, the threat of Russian Kornet ATGMs was present and very real, especially when the advanced Russian missile started appearing in the hands of Hamas terrorists.

The next conflict for the Mk.4 – the Gaza War – confirmed the durability of this vehicle and its ability to operate technically behind enemy lines but the work on improving it continued and, in 2009, the production was switched to an upgraded model with Trophy APS called Mk.4 Meil Ruach (or Mk.4M, also known under the name Windbreaker). Suffice to say, the Trophy is the only battle-proven hard-kill system currently on offer – but that is a story for another time.

In Armored Warfare, the Merkava Mk.4 will be an Israeli Branch Tier 9 Progression Main Battle Tank.

With an average damage per minute value of over 5000, it will be one of the best damage dealers of the game for its class and Tier despite its rather low damage per shot value. The low damage per shot will be compensated by its high rate of fire, excellent penetration value as well as the ability to fire LAHAT guided missiles. The accuracy and aim times will also be excellent, especially with the available FCS upgrade.

Protection-wise, the Merkava Mk.4 will be roughly on the Type 99A level but it will feature the Trophy APS without the need to unlock it as an upgrade the way you will have to on the Mk.3. It will also feature a very high amount of hitpoints. This all will, however, be compensated by its rather average mobility, making this vehicle excellent at fire support but not as good at mobility combat and flanking maneuvers.