This month in our Branch of the Month series is dedicated to the BMP series branch, available in Sophie Wölfli’s vehicle pool. 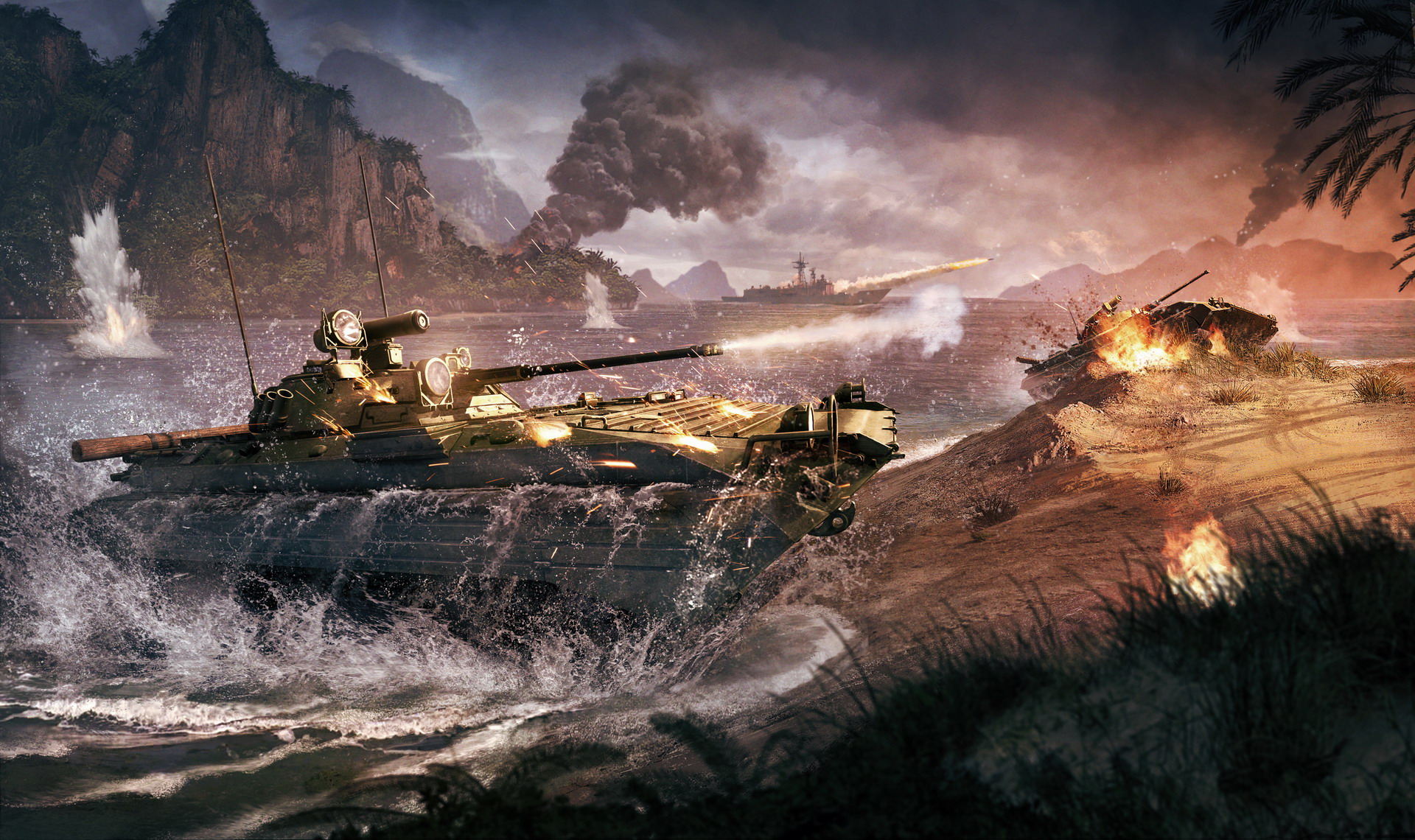 The BMP series or Soviet and Russian Infantry Fighting Vehicles goes back to the 1960s when he Soviets needed a fast, armored, tracked vehicle to keep up with their armored formations. What they came up with was, at that time, the most modern IFV in the world and certainly the best armed one – at least in paper – the BMP-1.

The ubiquitous BMP-1 is – quite correctly – regarded as one of the symbols of the Soviet military power, the fears of the western militaries embodied in endless streams of Russian vehicles, thrust from the cities of East Germany, plains of Poland and mountains of Czechoslovakia as an armored spear into the heart of the NATO forces in Europe. The vehicle development history is described in our dedicated article. 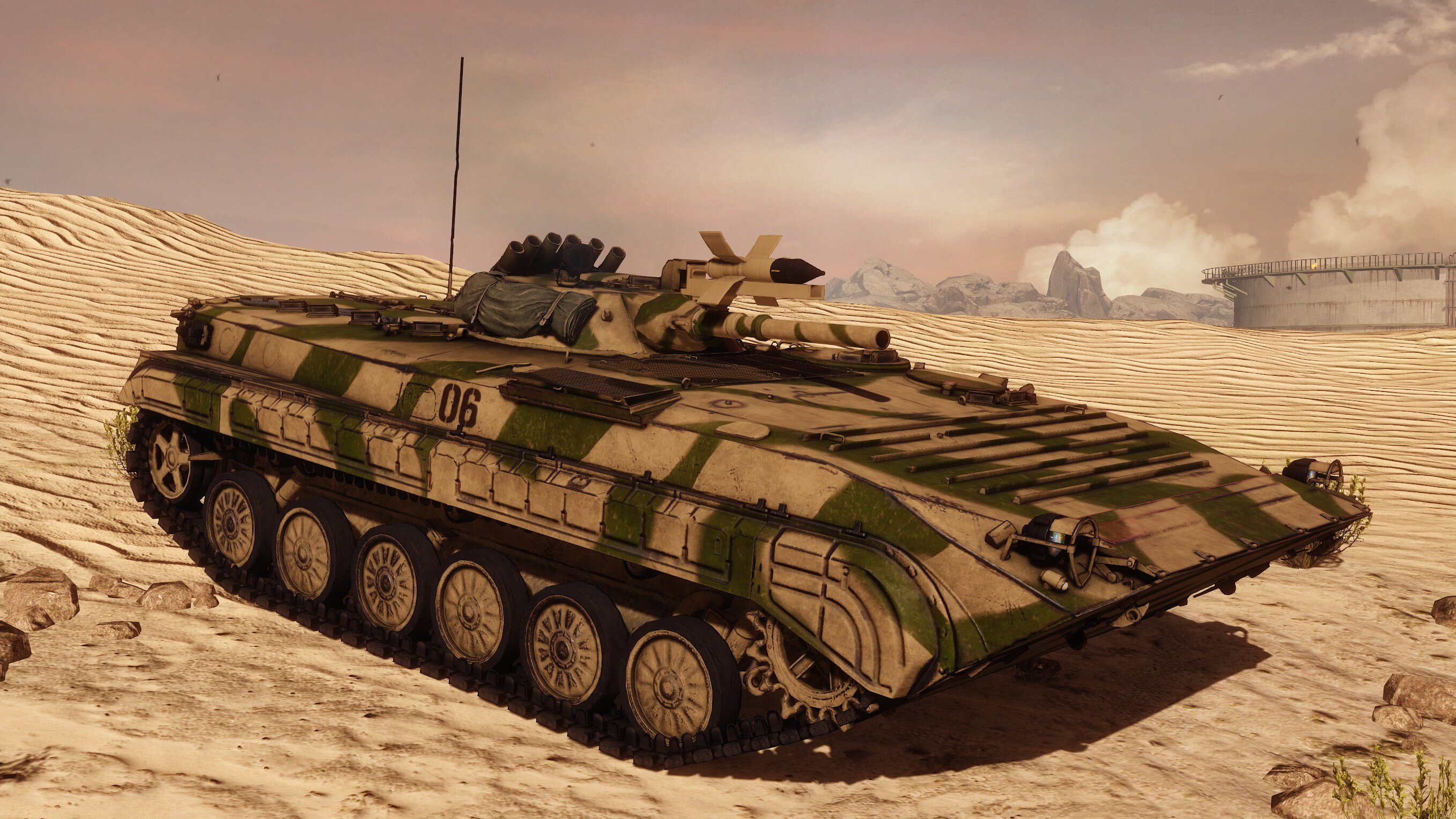 The reality, as it usually happens, was far less glorious and first combat operations of the BMP-1 in the conflict of Soviet-backed Arab nations versus Israel have shown the weaknesses of this light IFV, specifically the insufficient armament, cramped compartment and poor crew placement. While the issues in the middle-eastern wars were largely attributed to the improper use of the exported vehicles along with wrong tactics, admitting the problems of the vehicle on its home ground – in Soviet Russia – proved out to be much longer and arduous process, especially since it had to include certain influential parties admitting being wrong. It took a great deal of time to design its replacement, the BMP-2, and the process was anything but simple. It is described in the following articles:

The BMP-2 was an upgrade over the BMP-1, but not a huge one – it was more like an upgraded version with many of the original design flaws, including its cramped design and the inability to mount a larger weapon system. But, even before the first BMP-2 rolled off the assembly lines, the Soviets had set their sights on developing a true successor – a bigger and better BMP. 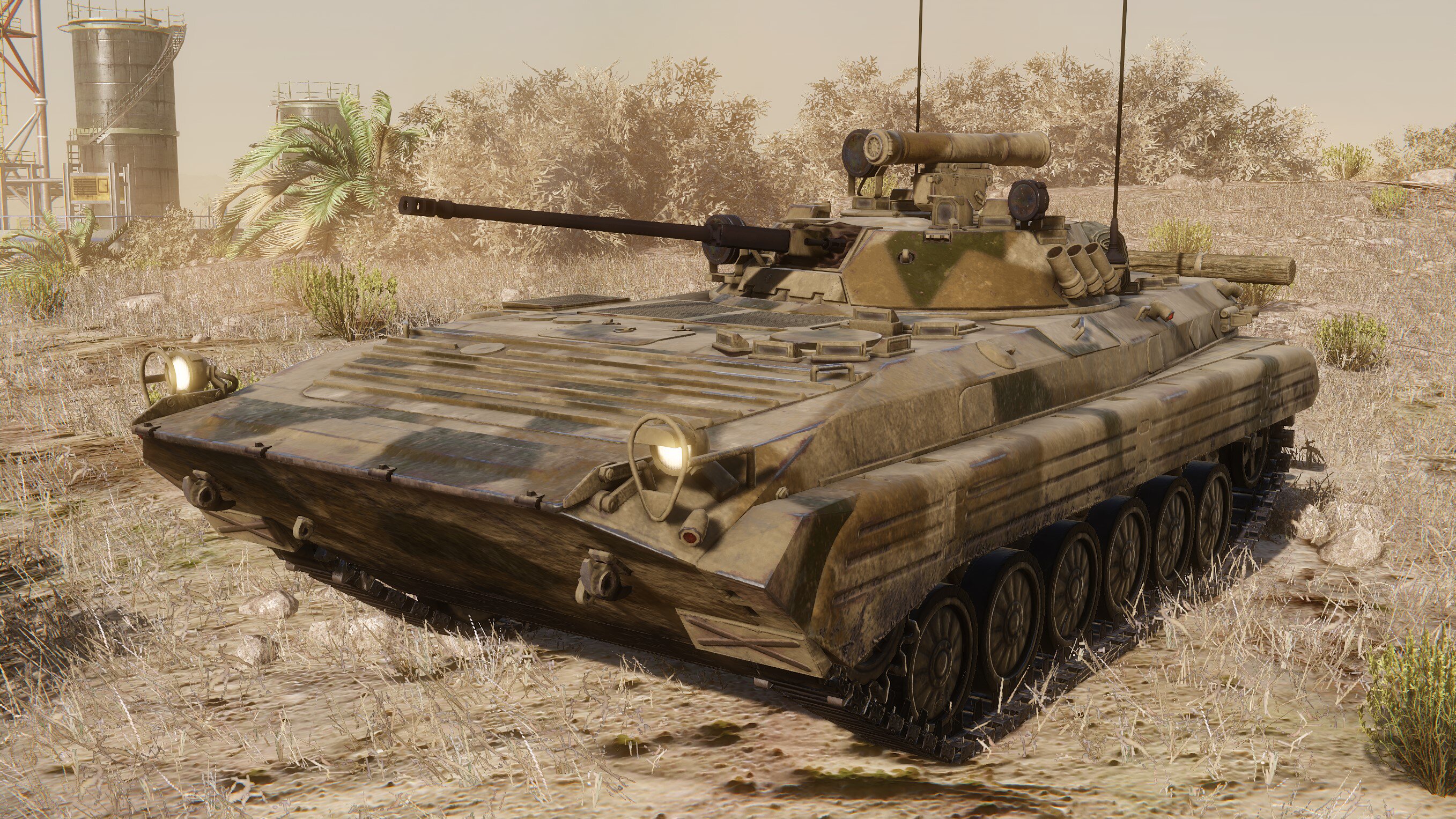 The result was the BMP-3. Larger and better armored, it replaced the BMP-1 and BMP-2 weapons with the rather distinctive combination of a low muzzle energy 100mm cannon (intended to fire HE rounds and gun-launched missiles) and a long-barreled 30mm autocannon.

Several hundred were built starting from the late 1980s but by the time it appeared in public, the Soviet Union was practically collapsing. The 1990s were a dark time for the Russian military as many of the development and production programs from the Soviet era were cancelled due to a lack of funding, including a true mass production – approximately 2000 vehicles were built in total throughout the 1990s, but around three quarters of that number were export vehicles – Russia itself kept around 500 of them, a significant drop compared to the tens of thousands of earlier BMP vehicles. Its history was also described in a dedicated article.

The BMP-3 continues to serve to this day stay as the main Russian IFV. During the 2000s, several major upgrades for it were conceived (including the BMP-3M and the Dragun), some of which are available in Armored Warfare.

From September 3 to September 30, 2018, the following vehicles will be available for lower price than usual:

BMP-1 Tier 3 AFV – The original Soviet BMP-1 IFV in its configuration with a Malyutka launcher and a 73mm 2A28 Grom gun. At the time of its introduction in mid-1960s, it was the best IFV in the world but grew obsolete in the decades that followed. With more than twenty thousand built (including the license-produced variants), it is still one of the most common IFVs in the world. You can read more about it in our dedicated article. 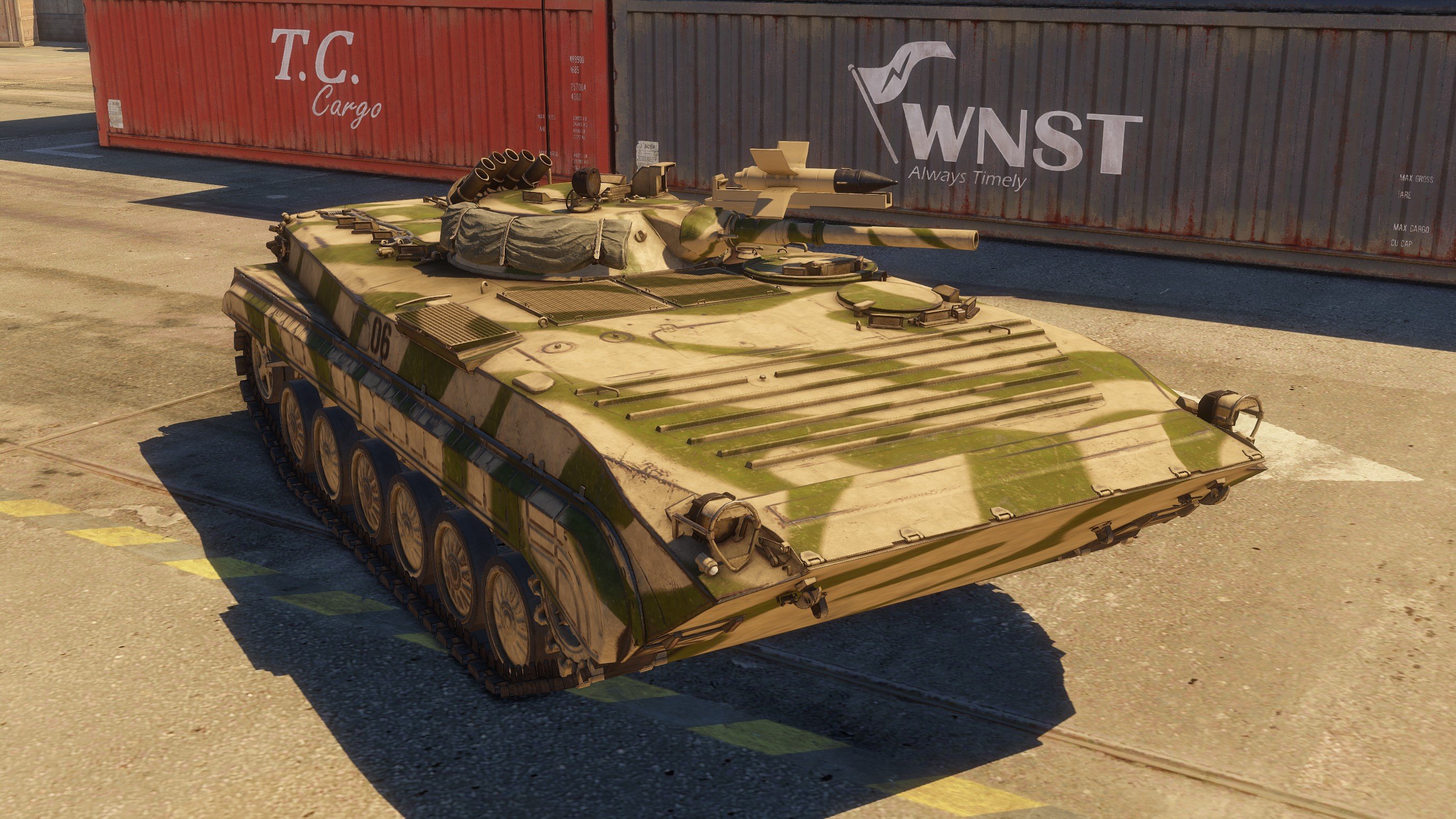 BMP-1P Tier 4 AFV – This is an upgraded late production BMP-1 model. The biggest difference compared to the original BMP-1 is the improved guided missile system, allowing it to knock out even the tanks that the original Malyutka ATGM would struggle with. You can read more about it in our dedicated article. 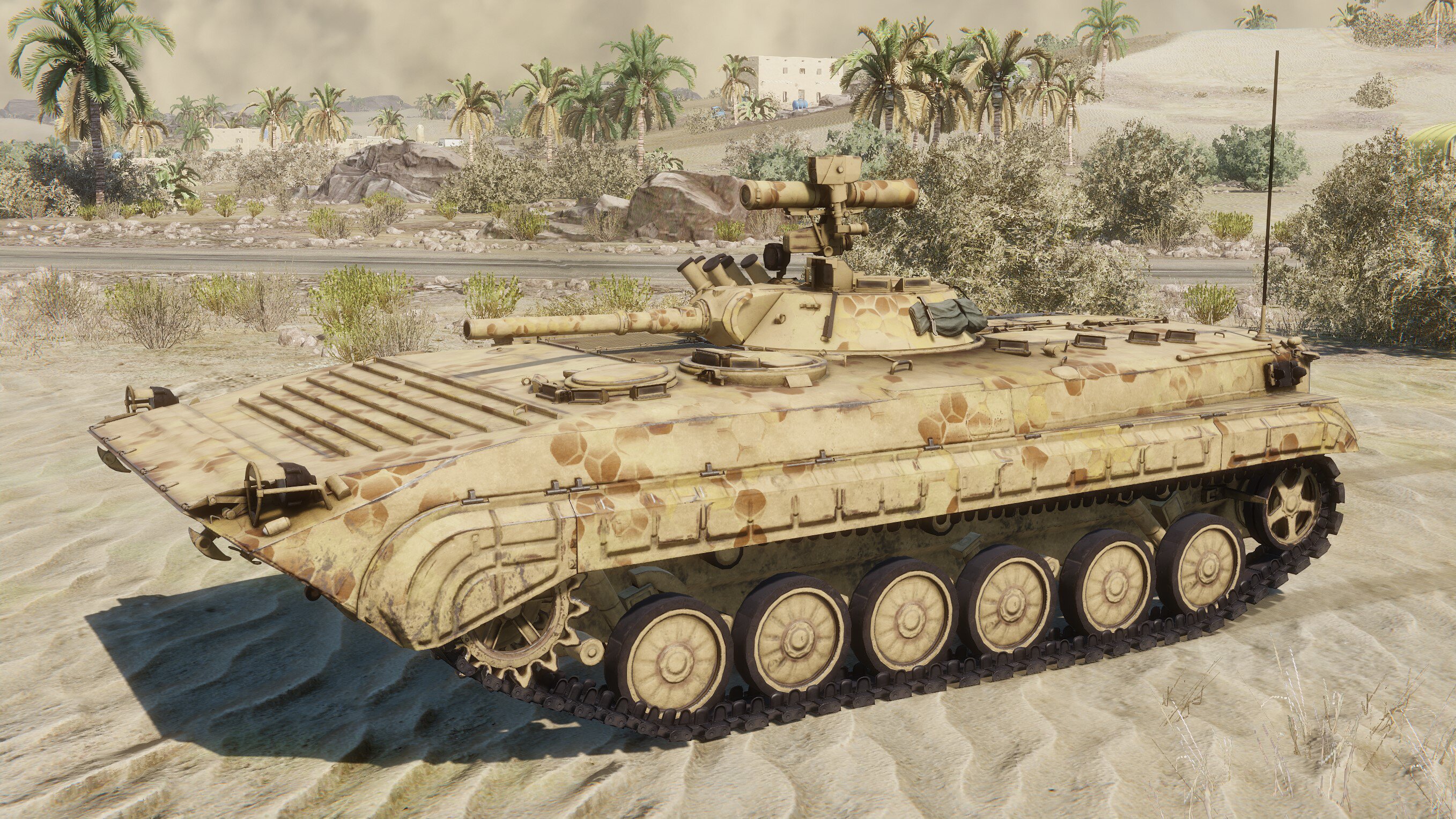 BMP-2 Tier 5 AFV – The BMP-2 was the second major production variant of the original BMP with its turret replaced by one carrying a 30mm autocannon. Like the BMP-1, it was produced in relatively large numbers in the Soviet Union and outside of it as well. You can read more about it in our article series – Part 1, Part 2 and Part 3. 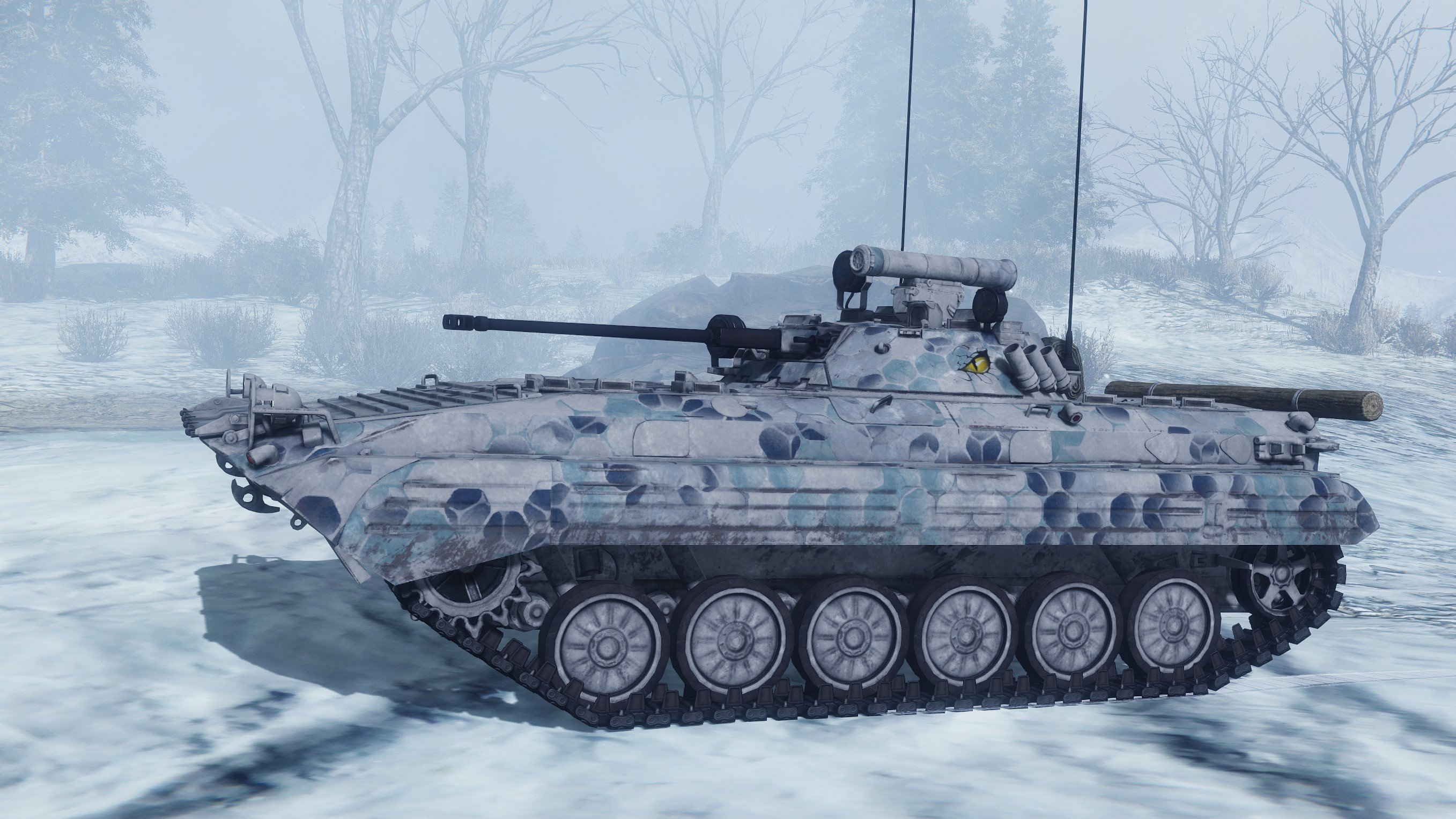 BMP-3 Tier 6 AFV – Unlike the BMP-2, this vehicle from the late 1980s was a true replacement for the BMP-1 and BMP-2, not just an upgrade. Unfortunately for it, the fall of the Soviet Union severely limited its development funds as well as its production orders and, to this day, only about two thousand had been built. Nevertheless, it is the current main IFV of the Russian Federation. You can read more about it in our dedicated article. 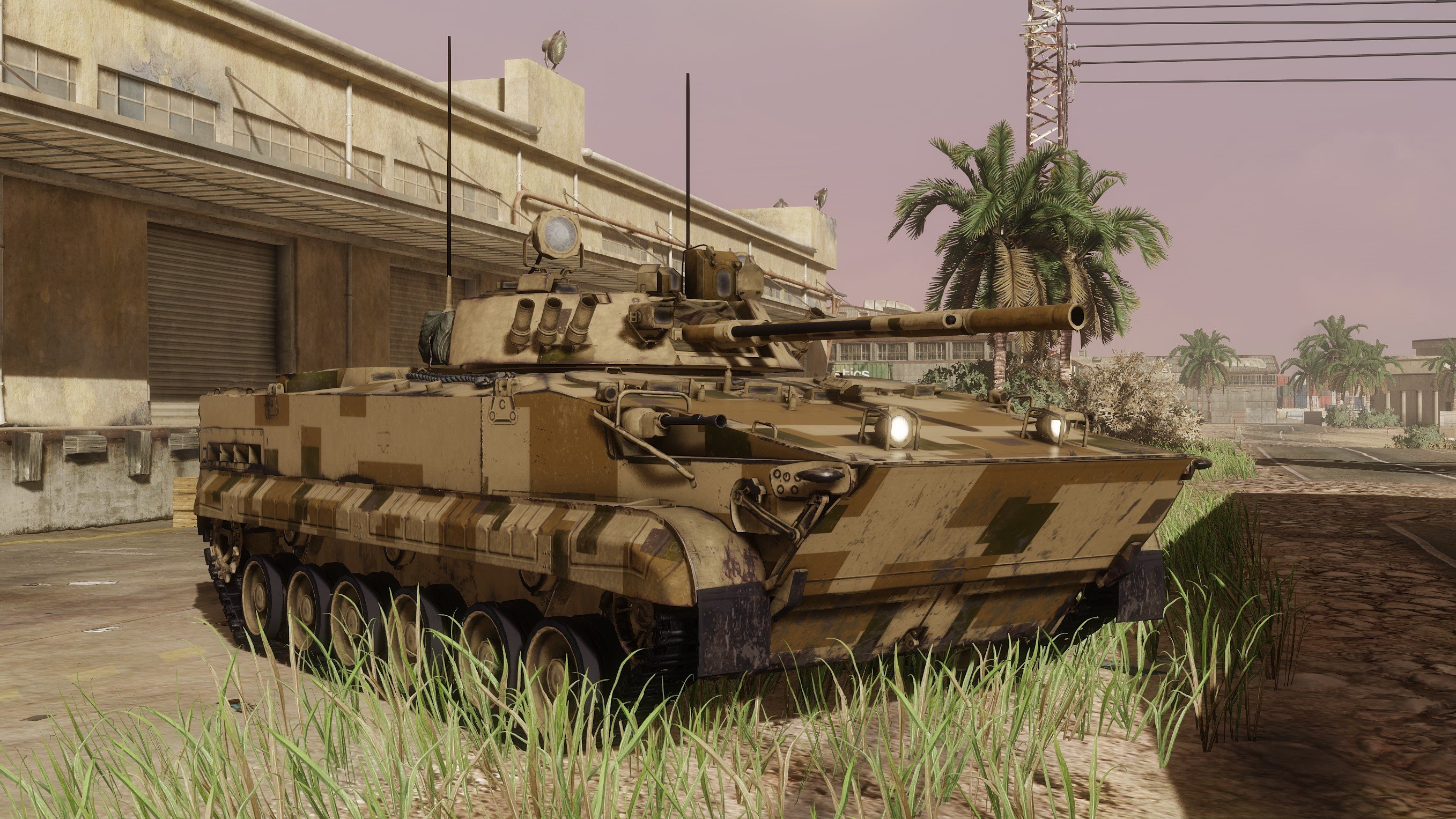 BMP-3M Tier 7 AFV – The BMP-3M variant was a late 1990s attempt at a major modernization of the BMP-3 that included a more powerful engine, a better FCS and improved gun-launched ATGMs. Other improvements included an Arena-E APS option. An unknown number of these vehicles was built for both the Russian Federation and for export but the production run was likely limited to only dozens of vehicles. You can read more about it in our dedicated article. 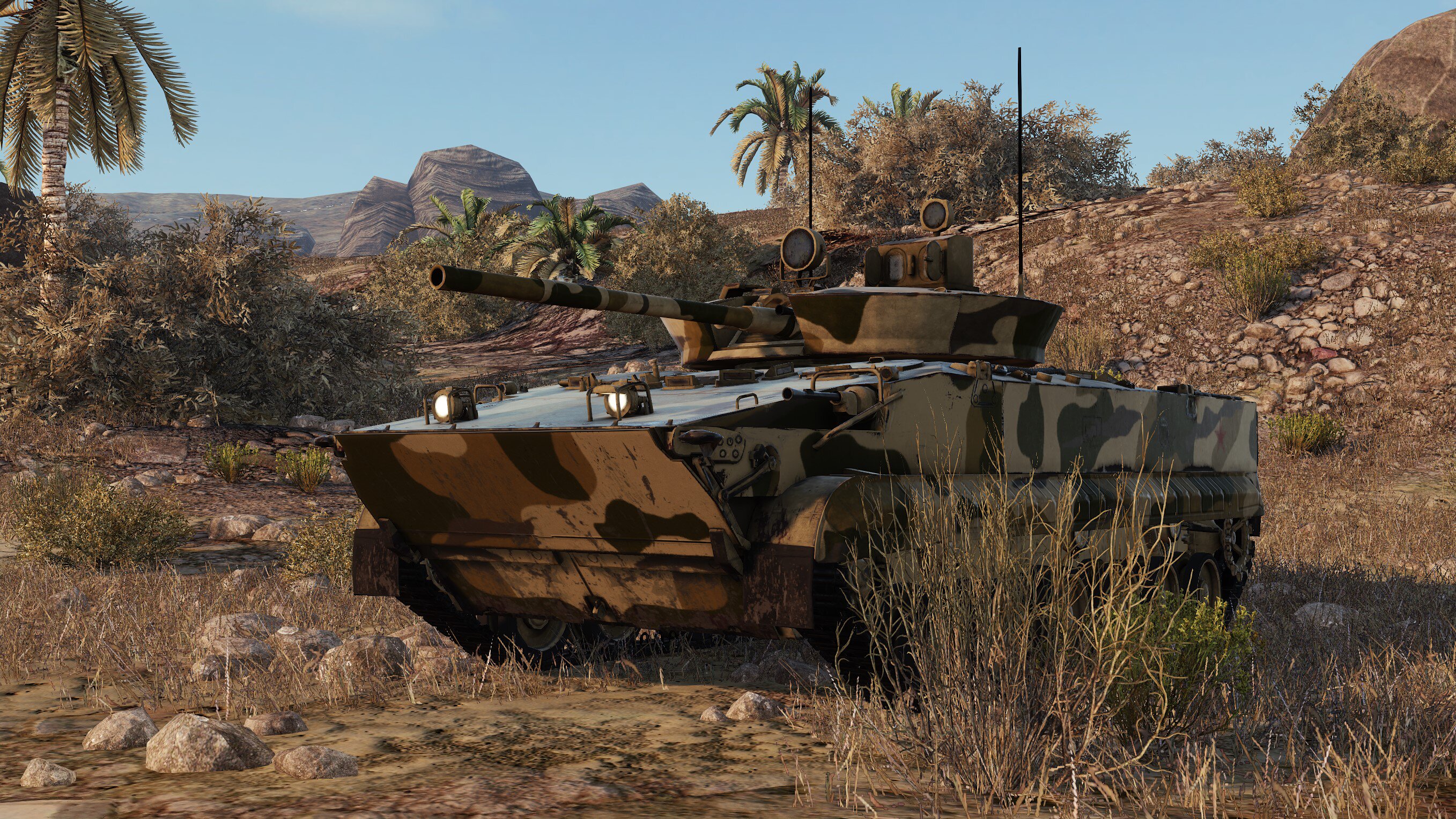 Dragun 125 Tier 8 LT – The Dragun (“Dragoon”) is a platform derived from the original BMP-3 but with many changes and improvements. The biggest change is the overhaul of its internal layout by moving the engine to the front – this leaves more space for the crew and improves frontal crew protection. Three combat modules were conceived for the Dragun platform – a 100+30mm one, a 57mm one and a 125mm one akin to that of the Sprut-SDM-1. The Armored Warfare version is armed with the 125mm turret and equipped with an ERA kit.

In Armored Warfare, the BMP series (with the exception of the Dragun) can be classified as a heavy IFV one.

Heavy IFVs lie in their role somewhere between the Light AFVs (such as the VBLs and BMDs) and the Light Tanks. On the scale of mobility, they are second only to the Light AFVs, especially on hard surfaces, with the scale itself looking roughly as such (from the highest mobility class to the lowest):

The armament systems are generally identical to the Light AFV class but are better stabilized (increased accuracy on the move) or can fire faster. Heavy AFVs are also larger and have more hitpoints with some of the vehicles featuring quite solid protection, rivaling that of the Light Tanks – for example, the Bradley and the BMP-3 both carry an ERA kit. This armor, however, should not be generally relied upon as main caliber weapons and guided missiles will penetrate it quite easily. 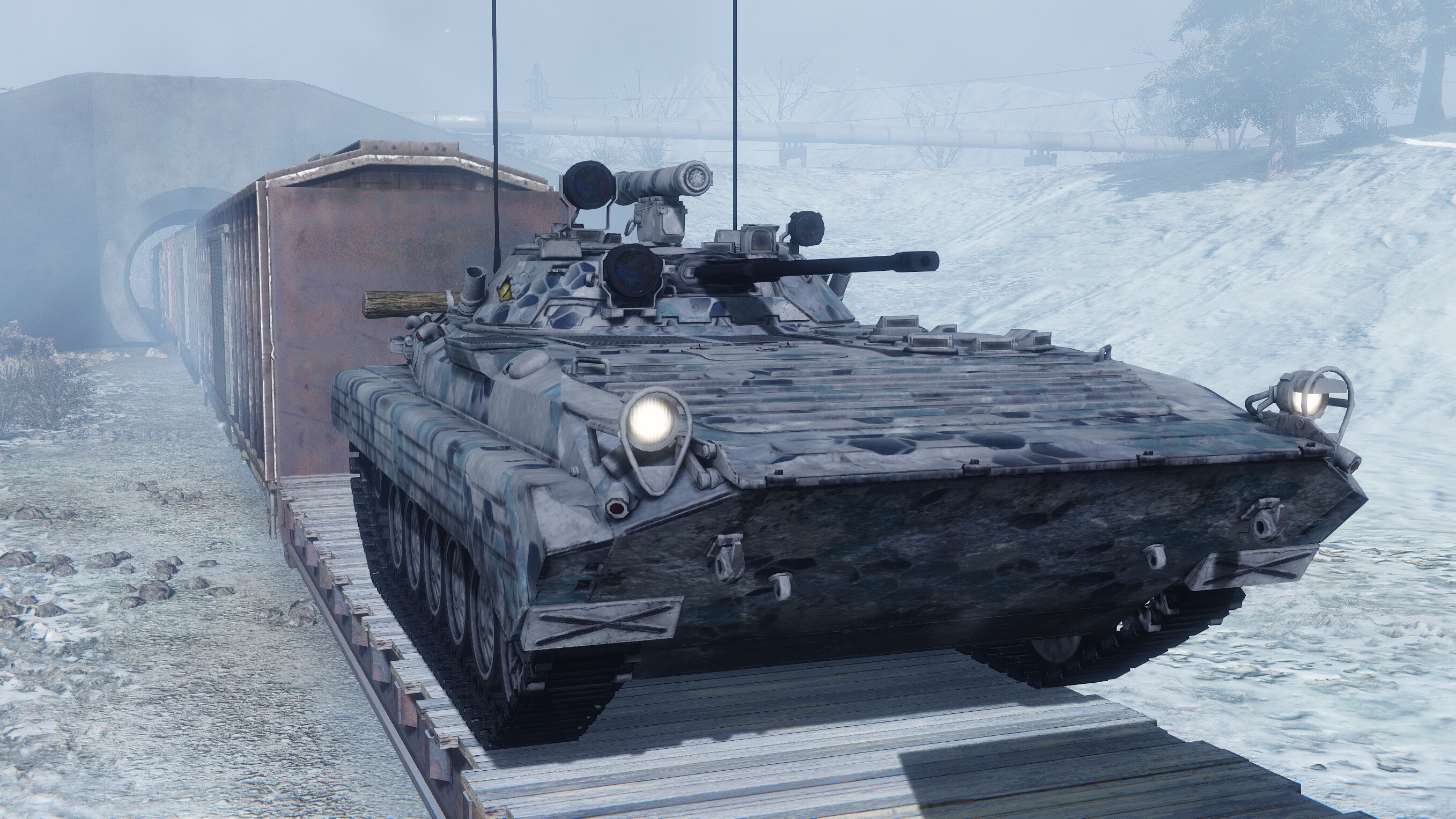 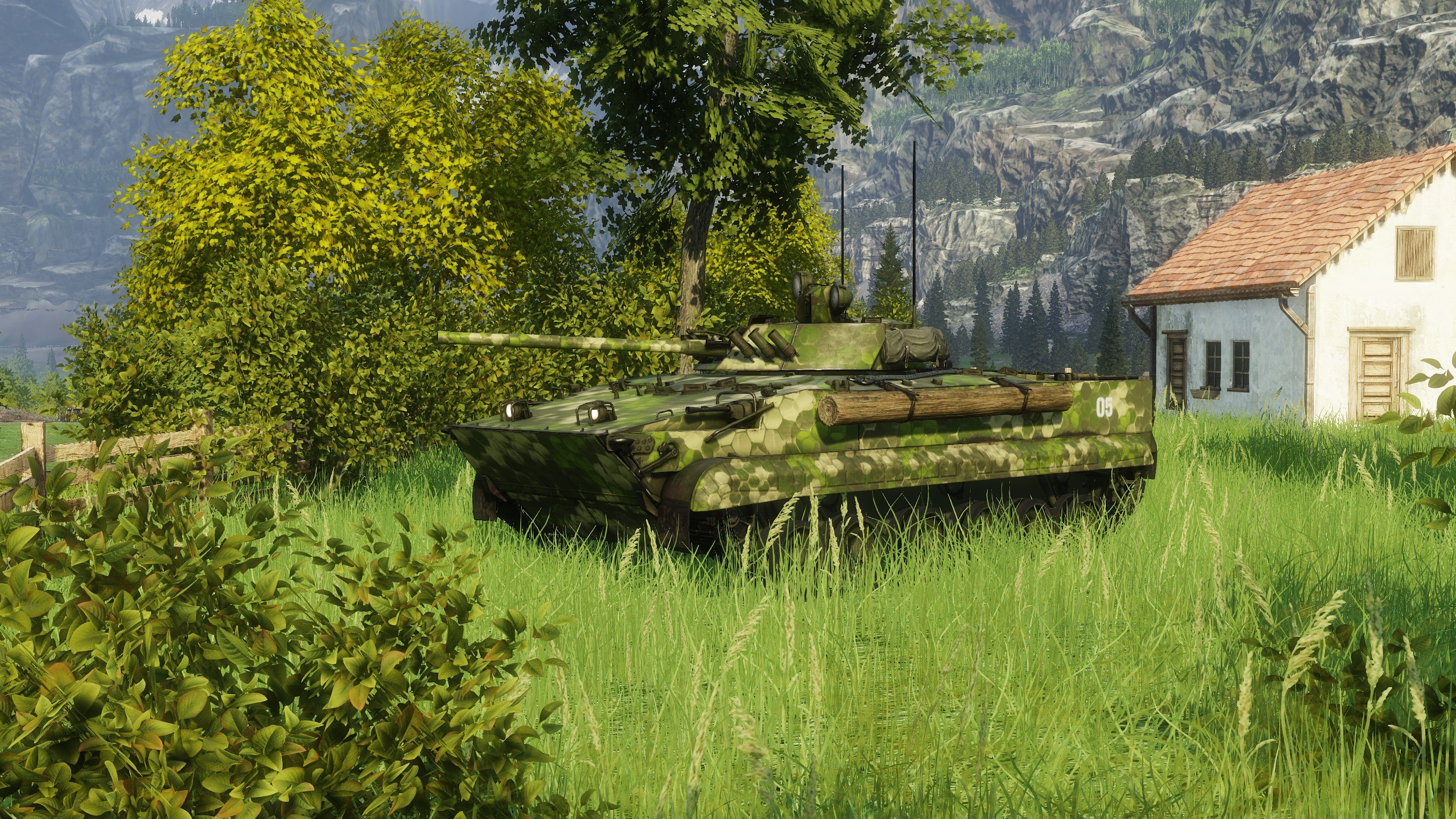 Find out more about the amazing Special Operations achievement guides made by Primer7G!