The BMP-3M Dragun is the ultimate evolution of the BMP-3 design, which reaches back to the late 1970s and early 80s. The BMP-3 Infantry Fighting Vehicle was designed as a successor to the BMP-2, a vehicle that, although produced in great numbers, was not exactly successful when it came to combat performance.

The BMP-3 was bigger, better armored and, most importantly, better armed than the BMP-2. Armored Warfare currently has two BMP-3 types, the BMP-3 and BMP-3M. The BMP-3 is a relatively successful (if aging) design, while the BMP-3M is an upgraded variant from the late 1990s with an upgraded engine, improved side armor and an improved FCS.

The BMP-3M Dragun (Dragoon), however, is quite different from both of these vehicles, despite bearing the same designation as the latter one. It is a heavily modified BMP-3M by the producer of the original BMP-3, Kurganmashzavod (now part of the Machinery and Industrial Group N.V). It was shown to the public for the first time in September 2015 during the Russia Arms Expo. The vehicle is mostly aimed at the export market.

There are some significant changes compared to the original BMP-3 and BMP-3M. For starters, the engine was upgraded to the 816hp UTD-32 turbocharged diesel, which allows an average speed of 60 km/h (maximum achievable speed is not stated but it is believed to exceed 70 km/h). The engine was moved to the front of the vehicle, increasing frontal protection and also improving the crew compartment layout.

The crew consists of 3 men (commander, gunner and driver), but the Dragun can also carry 8 troops. The crew sits in the middle of the vehicle, between the turret and the engine. Compared to the earlier BMP-3, the troop compartment was completely overhauled and is now better protected against mine and IED explosions. Specially sealed fuel tanks were installed on the rear sides of the vehicle, near the troop compartment. 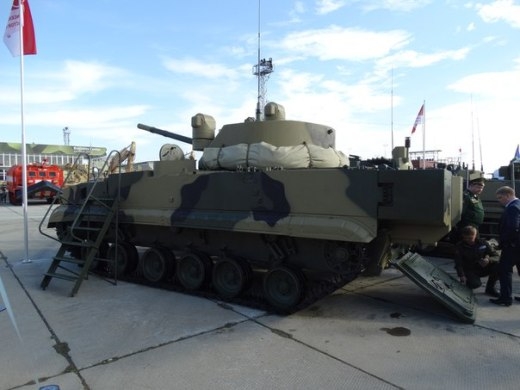 The standard version of the BMP-3M Dragun is to be armed with an unmanned turret carrying the usual BMP-3 weapons setup, a 100mm 2A70 cannon and a 2A72 30mm automatic gun (plus a 7.62mm machinegun). The vehicle can also fire guided missiles from its main gun. All weapons are automatically loaded. The weapons are controlled by an advanced FCS, focusing on the ability of the vehicle to shoot before its opponent. The commander and the gunner have unified panoramic Krechet day-night sights at their disposal. That is not the only armament variant available to potential buyers. There are in fact two more:

BM 57 unmanned turret with a 57mm automatic cannon. This should not to be mistaken for the BMP-3 Derivation, which is a different vehicle, although it does use a variant of the same turret (AU220M and BM 57 are related). BM is a Russian designation for the system, but in the west it is offered under the designation of RCWS 57.

Compared to the unmanned turret Dragun configuration, the gunner and the commander are moved to the turret. The 2A75 is a heavily modified 2A46M tank gun. It is capable of firing standard 2A46 125mm rounds. Its power is controlled on the light chassis by using longer recoil and hydrodynamic suspension elements. The automatic loader allows it to fire 7 rounds per minute.

All these versions will be eventually introduced to Armored Warfare.