The concept of an infantry fighting vehicle (also known as the IFV) is not a new one. It evolved from the original armored personnel carriers that in turn appeared – in some cases – even before WW2. It was however only much later before this class of vehicles became prominent on the battlefield, thanks to its massive use by NATO and Warsaw Pact forces. There are many vehicles of this class both in and outside of NATO and the former Warsaw Pact countries, but there are two vehicles representing the teething issues of this vehicle class very well – and those are the Bradley IFV and the Soviet BMP.

The issues with Bradley development are generally well-known thanks to the Hollywood take on the entire development – in 1998, the movie Pentagon Wars came out, describing the development that in the end took practically 20 years and around 14 billion USD as of 1986. The movie is – as it usually happens in Hollywood - not entirely correct as some issues were vastly overblown for satirical purposes while others, specifically the Israeli involvement, were simply misinterpreted.

In the end however, the US Army got its fighting vehicle to a reasonable state and used it with various degrees of success in Iraq. While sources vary, it’s possible that over 100 of the Bradley vehicles were destroyed in the war, mostly due to RPG ambushes and improvised explosive devices (IED’s).

Unlike the American side, the Soviet IFV development is not as well-known. There is a certain myth going around about the efficiency of the Soviet military industry (in contrast to the allegedly „corrupt” private military equipment producers of the western countries). Nothing could however be further from the truth and the BMP-2 serves as a perfect example of what the Soviet development looked like in some cases. But to start the story, we have to look back at the BMP-1.

The ubiquitous BMP-1 is – quite correctly – regarded as one of the symbols of the Soviet military power, the fears of the western militaries embodied in endless streams of Russian vehicles, thrust from the cities of East Germany, plains of Poland and mountains of Czechoslovakia as an armored spear into the heart of the NATO forces in Europe.

The reality, as it usually happens, was far less glorious and first combat operations of the BMP-1 in the conflict of Soviet-backed Arab nations versus Israel have shown the weaknesses of this light IFV, specifically the insufficient armament, cramped compartment and poor crew placement. While the issues in the middle-eastern wars were largely attributed to the improper use of the exported vehicles along with wrong tactics, admitting the problems of the vehicle on its home ground – in Soviet Russia – proved out to be much longer and arduous process, especially since it had to include certain influential parties admitting being wrong.

One of the things never really decided for the BMP-1 was the official proper tactical use. In the beginning, the vehicle was – like the BTR class vehicles (BTR – „bronetransporter“ is a Russian word for an APC) – intended only for the infantry transport and support role. In this however, the BMP-1 was even worse than the older BTR’s, as it had no other suitable weapon than a single PKT machinegun – its main weapon, the 2A28 Grom – was only theoretically useful in fighting enemy armored forces.

The 2A28 Grom is a 73mm smoothbore low-pressure gun, its primary purpose firing HEAT shells at enemy armored targets (HE-Frag shells were only introduced later on in mid-70’s). It was not selected as the best weapon for the future Soviet IFV, it was chosen simply because no other gun was available. This unfortunate situation was partially caused by the overseer of the BMP-1 development, GRAU (Main Missile and Artillery Directorate), as opposed to the „usual“ armor development overseer, GBTU (Main Armor Directorate). From the names of these Soviet institutions, their line of thought is not that hard to fathom. GRAU was heavily influenced by Khruschev government’s incompetence and placed their bet on a losing horse: early missiles. When this line of thought turned out to be wrong, they naturally did not want to be the ones to be held responsible and continued to refuse any blame.

GRAU in turn had no lighter, automatic cannon available and did not oversee any institute or bureau that would be capable of designing one, as most were disbanded in the early 60’s. Automatic guns were only developed by the Soviet air force and the navy, but those fell under different government officials, not affiliated with GRAU. What made the matter even worse was the fact that certain GRAU generals „fell in love“ with the 2A28 caliber, promoting it as „the most powerful gun ever mounted on an IFV“. When actual officers in charge of these vehicles complained about the gun’s poor performance and accuracy, they were accused of poor maintenance and insufficient training with all the complaints being silently swept under the rug. But the rumors slowly made their way up the Soviet ranks and in the end, GBTU forced the issue by organizing official shooting trials at Kubinka proving grounds. A BMP-1 was to fire against an obsolete T-55 tank at 800 meters (the target was not moving). And the result of the trials? Of 50 shots, only 17 did hit the tank - others were carried off their trajectory by the wind. The shells that did hit made their impacts under different angles – some ricocheted, some did not, but in the end, not a single shell managed to penetrate the vehicle. After the trials, a driver just drove off with the undamaged tank – a fitting testament to the inefficiency of the Grom gun. 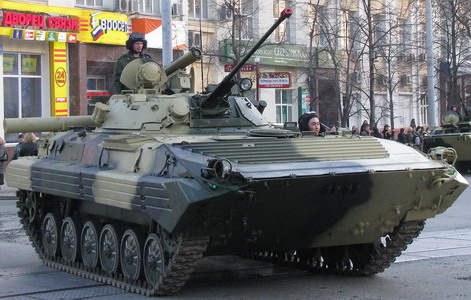 The Birth of the BMP-2

This particular trial finally caused a scandal in Soviet ranks and the ministry of defense immediately ordered the vehicle to be modified in order to increase its firepower. As a part of this initiative, it was to be fitted with a dual-axis stabilizer and with the newest generation of anti-tank missiles. What followed however was to be the proof of the fact that strange IFV development process filled with blunders was by no means exclusive to the Americans.

For one, a serious flaw of this initiative proved to be the demand for a one-man turret. A single crewmember turret was proven to be ineffective many times in history, making the decision to use it once again quite strange. But that was not to be the last issue – two Soviet design bureaus and plants were tasked with cooperating on the BMP vehicle improvement and with building a prototype of the said vehicle – ChTZ (Chelyabinsk Tractor Plant) and KMZ (Kurgan Mashine Construction Plant). In the past, ChTZ did win the BMP-1 design competition, but the contract actually went to KMZ (citing ChTZ’s „lacking production capacities“) creating bitter rivalry amongst the two bureaus. How well that „cooperation“ went is anyone’s guess – nevertheless, both design bureaus were merged into one temporary bureau, called OKB Bosk (OKB means „experimental design bureau“ in Russian).

At first, ChKZ tried to use the fact favor of GRAU and decided to improve the Grom gun. The result was an experimental vehicle designated Object 768 with a one-man turret and an improved 73mm gun, designation „Zarnitsa“. This weapon used the same ammunition as the Grom, but its barrel was longer, resulting in improved accuracy and range. To silence the cries of Soviet soldiers for a better infantry support weapon, they paired the gun with one 12,7mm NSVT machinegun. Since both guns did not fit the original turret and additional space for the stabilizer mechanism was required as well, ChKZ reworked the turret and increased its size. This turned out to be a problem as well, since the increased weight of the weapons and turret caused the vehicle to lose its amphibious capability. This in turn was „solved“ by making the hull longer and adding the seventh roadwheel while the turret was shifted to the back. This „modification“ did not bother the ChKZ designers at all – after all, they wouldn’t have to actually produce the hull, as it was to be manufactured by their competitor, KMZ.

In the end, the weight was increased to 13.5 tons and despite the fact the hull was now 83 centimeters longer, only six infantrymen could fit inside this vehicle. This issue in turn caused notable lack of enthusiasm in GBTU (to put it mildly) but despite the objections the Object 768 was finished and ready for trials by the end of 1972. In the end however, the project was significantly delayed by the „competition“ – the KMZ representatives in the OKB were adamant: the vehicle has to be based on the current, existing BMP hull, as the „modifications“ ChKZ proposed would require a complete overhaul of the entire assembly line. And so the „cooperation“ was de-facto over before it even began. The KMZ designers then decided to comply with the army requests and proposed a vehicle equipped with an effective automatic gun, capable of infantry support role (at this point, the 73mm guns were still firing HEAT shells only, HE-Frag would come only two years later) and of fighting enemy soft targets, slower aircraft and – most notably – helicopters, that were becoming very popular with NATO at that point.

How well that went is a story for the next part…