By the end of the 1970s, almost fifteen years after its introduction to service, the Soviets felt that the BMP-1 was already somewhat obsolete. Not only it had its original flaws, but one of its main declared features, the ability to kill enemy tanks, was dangerously threatened by the appearance of a new generation of NATO MBTs (such as the Leopard 2 and Abrams) with considerably improved protection. 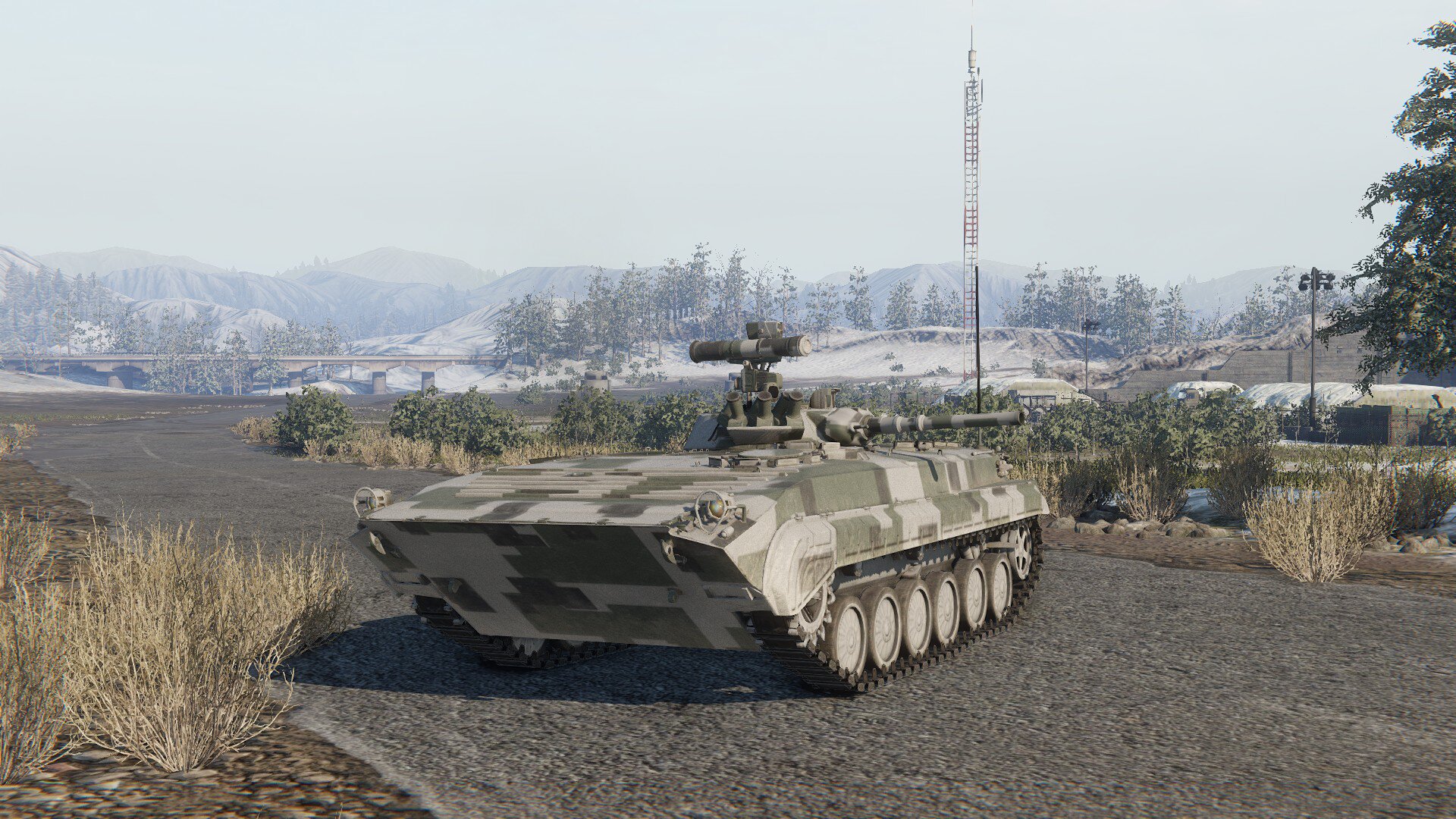 By that time, the BMP-1’s successor, the BMP-2, was almost ready but the question was, what to do with the thousands of BMP-1s produced until that point. Replacing them all with BMP-2s was prohibitively expensive and the struggling Soviet Union of the 1980s couldn’t really afford it. Besides, it’s not like the BMP-1 was completely obsolete, they thought – sure, it could use an upgrade, but otherwise it was fine.

The result of this line of thought was an improved variant called BMP-1P (or Object 765 Sp.4) which was produced between 1979 and 1983 (when the general BMP-1 production in the Soviet Union ended).

The main focus of this upgrade was to improve the anti-tank capability by replacing the 9K11 Malyutka launcher system with a 9K111 Fagot one. Unlike the Malyutka, the Fagot missiles were considerably more powerful and more than a match for the MBTs the Soviets would encounter on the battlefield. A 120mm 9M111 Fagot missile had a range of 2km, flight velocity of 240 m/s and could penetrate up to 600mm of armor (depending on sources and variants – estimates vary between 450mm and 600mm). The missiles could also be upgraded to 135mm Konkurs ones that could penetrate more than 600mm of armor and had a range of 3km. The amount of carried missiles per vehicle didn’t change – the BMP-1P carried 4 missiles. 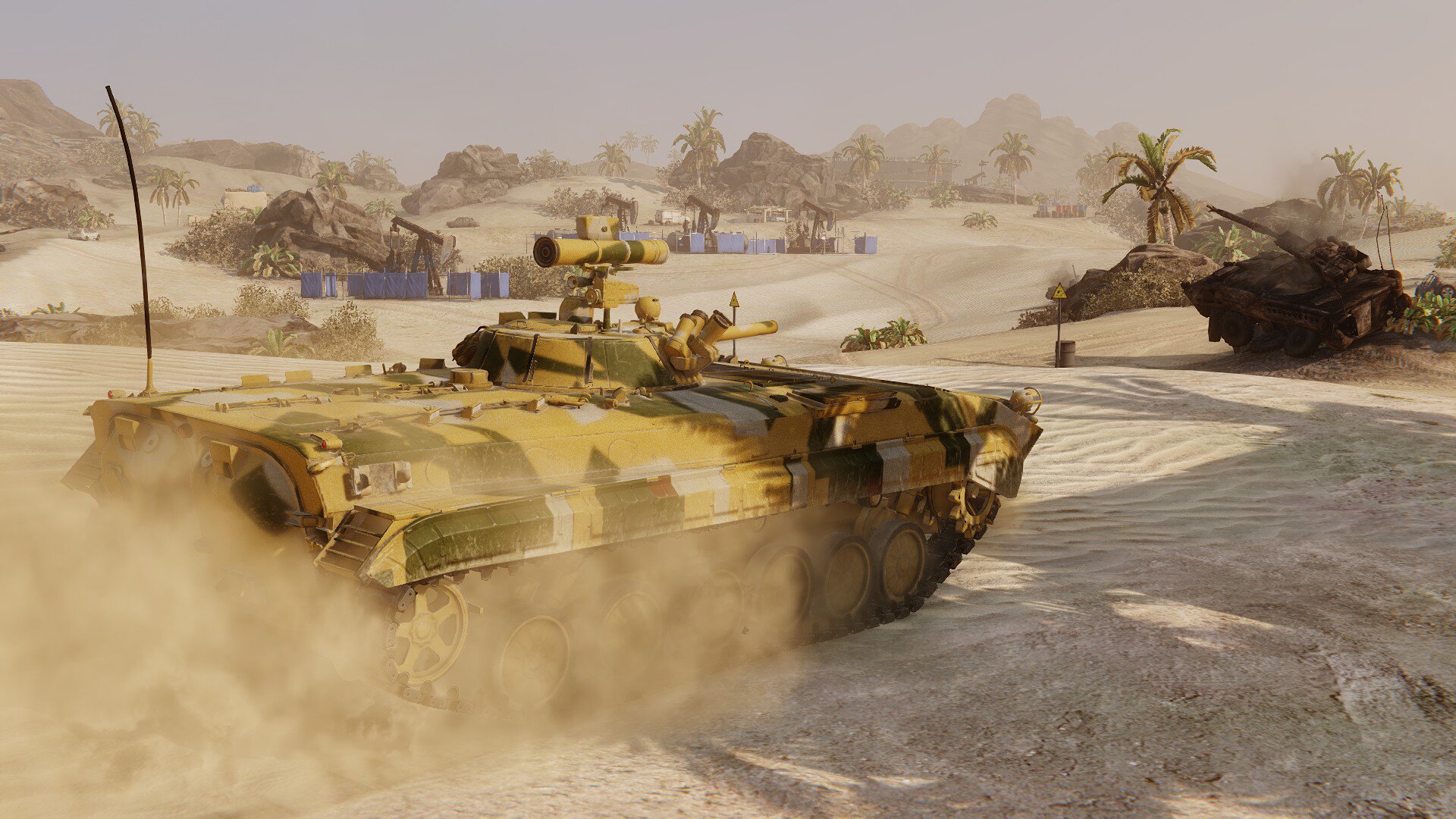 In order to increase the protection capabilities of the vehicle, a 902B Tucha smoke grenade launcher with 6 barrels was added at the back of the turret. Additionally, flame-retardant liner was added to the turret hull and turret of the vehicle, protecting the most exposed areas against napalm and other incendiary mixtures.

Otherwise, not much changed. The armor was not upgraded (that only happened later on the “Afghanistan” BMP-1D model). The vehicle was somewhat heavier (13.4 tons) but was still powered by the 300hp UTD-20 V6 diesel paired with a planetary manual transmission. Its maximum speed didn’t drop and was still around 65 km/h. A BMP-1PK commander variant existed as well with additional communications equipment.

It’s worth noting that there was one interesting variant of the BMP-1P developed – the BMP-1PG. In addition to all the changes of the BMP-1P, it had one extra weapon system – an AG-17 Plamya (Flame) 30mm automatic grenade launcher. The grenade launcher was fixed on the turret and the operator (commander and gunner) was aiming it by simply rotating the whole turret (vertical aiming was remote-controlled and independent on main gun elevation). The maximum direct fire range was 250m, but the indirect fire range was up to 1700m. The grenade launcher fired high explosive shells with a blast radius of 7 meters. With a rate of fire of up to 400 rounds per minute, it was a brutally effective weapon against enemy infantry. On the downside, the vehicle only carried 28 rounds for the weapon, severely limiting its use. Plus, it was yet another weapon system for the gunner to operate, reducing its overall effectiveness. An unknown (small) number was built by the end of the BMP-1P production run and was used exclusively by the Soviets (as was the BMP-1P). 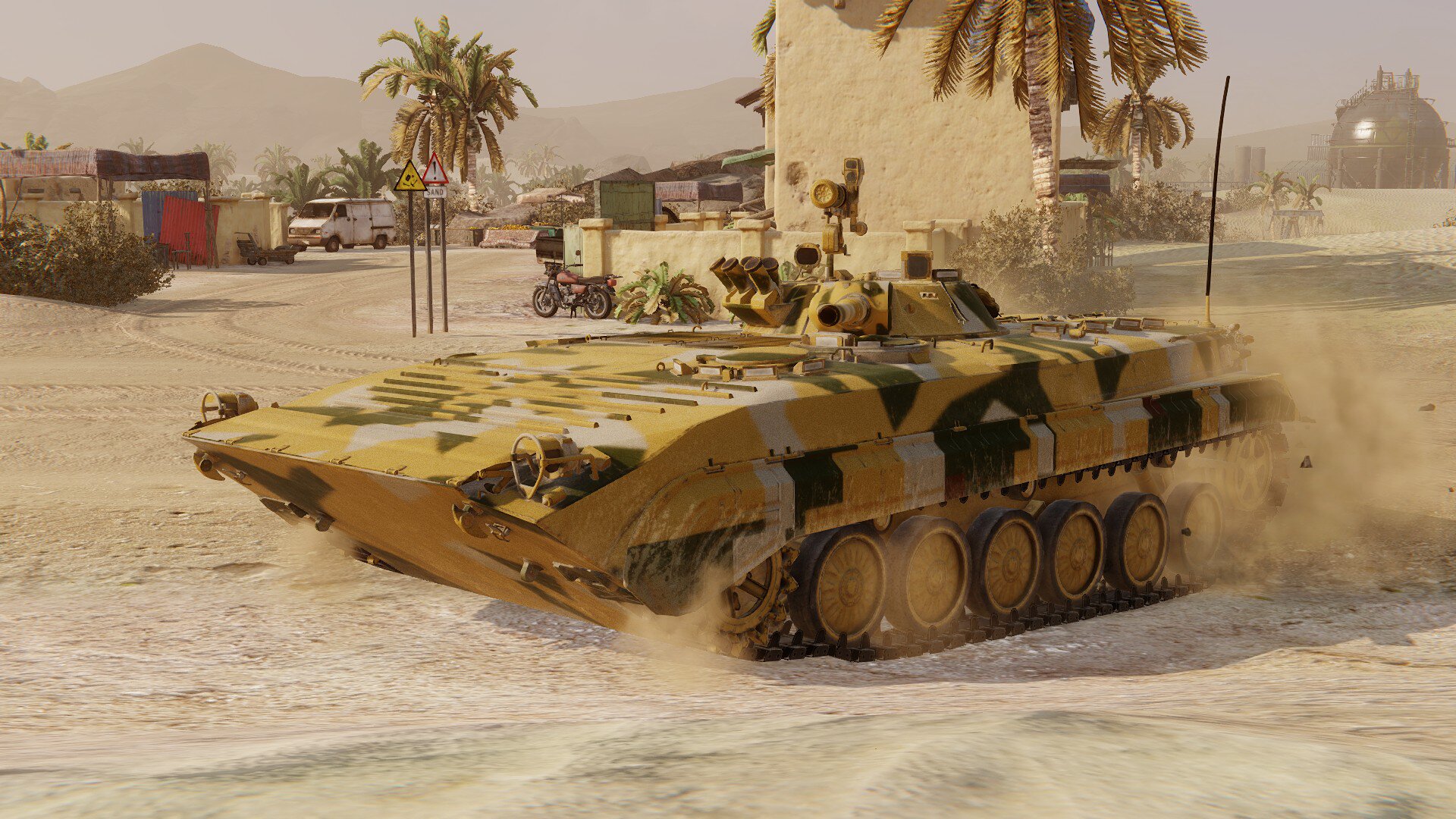 In Armored Warfare, the BMP-1P is a Tier 4 Armored Fighting Vehicle, available in the AFV branch of Sophie Wölfli’s vehicle pool. Gameplay-wise, it’s practically identical to the Tier 3 BMP-1 with the main difference being the ability to knock out Tier-appropriate MBTs with its modernized guided missile system. The key to success is to stay hidden and not attract undue attention, especially in PvE. Enemy fire can make short work of any BMP due to the general lack of armor even though its sloped front can sometimes resist light autocannon shots.

Like the BMP-1, the BMP-1P has very poor gun depression – choose your positions carefully in order not to get into situations where you can’t return fire because the enemy is below you. Stay behind bushes and use your supreme mobility and massive damage per shot to ambush the enemy.