By the late 1960s, the issues with the development of what would become the M60A2 were becoming more and more obvious to everyone, leading to more and more calls to return to the classic tank concept with a high muzzle velocity cannon. Meanwhile, MBT-70 development was in full-swing, but that didn't stop American engineers from experimenting with the M60 chassis. 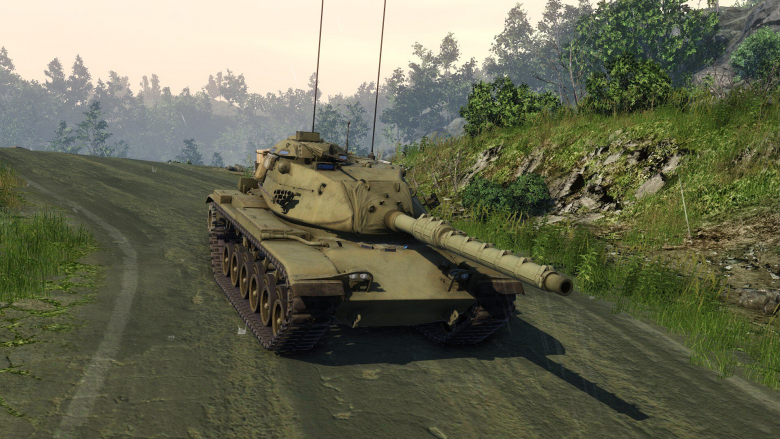 The reason for this (apart from having a back-up plan in case of an MBT-70 development failure) was that upgrading the M60 series would be far more cost-effective than actually producing a new tank from scratch, let alone one as complex and expensive as the MBT-70. In addition, lessons learned from MBT-70 development could be used to upgrade the M60, as demonstrated in 1968 by Chrysler.

In November 1968, Chrysler proposed an upgrade for the M60A1. They called the upgrade the K-Tank. It consisted of an M60A1 hull paired with a brand new turret that was to use the long 152mm XM150 gun-launcher designed for the MBT-70. The K-Turret (as it was called) was not a derivate of the existing M60A1 turret – it was a new sloped design made from rolled homogenous steel. 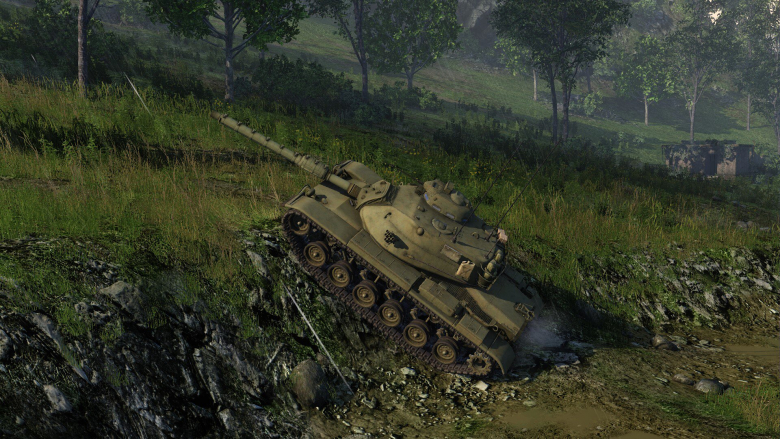 A mock-up of the 152mm K-Tank was built (including some suspension improvements) along with a version equipped with a 120mm hypervelocity smoothbore gun (designated Delta Gun). It was actually a sound project, but development was discontinued due to a lack of funding: the MBT-70 was eating up any resources the Vietnam War didn't and there simply was not enough money to go around. Apart from the infamous Starship, it was becoming more and more clear that the American military would have to stick with the M60A1.

This realization led to a decision to improve the Patton tanks in several stages and further improvements were developed with one specific requirement – they had to be usable for the entire M48 and M60 series.

The first stage included a new air cleaner for easier maintenance and a longer lifespan, better T142 tracks and a new gun stabilization mechanism (referred to as Add-On Stabilization) that significantly improved accuracy on the move. The first of these components appeared in 1971 and M60A1s retrofitted with the cleaners, new tracks and the add-on stabilization became known as M60A1 (AOS).

The second stage included significant improvements to engine reliability by focusing on the components causing the crews most trouble. A new AVDS-1790 engine variant (designated AVDS-1790-2C) was developed with improved starters, fuel injection, cylinders, electric systems and superchargers. Although it did not produce more power than the original engine, the lifespan was much better. 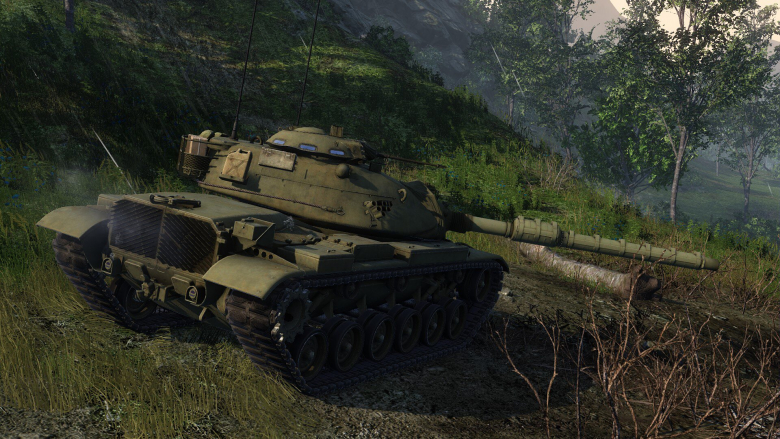 This stage was referred to as Reliability-Improved Selected Equipment. AVDS-1790-2C engines were installed into the M60A1 (AOS) tanks in 1975, resulting in a new variant, referred to as M60A1 (RISE).

The third stage of the development was technically part of the second, although it focused on adding more advanced features to the M60A1 (RISE) such as:

With these additional components, the M60A1 (RISE) was redesigned to 105mm Gun Full Tracked Combat Tank M60A1E3. Compared to the original M60A1, the M60A1E3 featured all the AOS and RISE improvements such as the stabilization and the reliable engine. The abovementioned Stage 3 features, however, were not available all at once for the first prototypes. They were gradually added and tested.

Twelve M60A1E3 prototypes had been built by March 1973 and they were thoroughly tested in Yuma, Aberdeen and Fort Knox. Some of the components mentioned (namely the sights) were added to the standard M60A1 (RISE) as well, producing a special version designated M60A1 (RISE) (PASSIVE) in 1977. 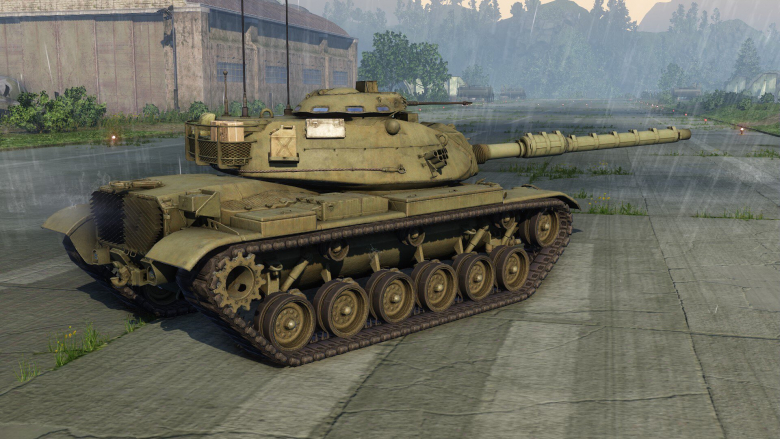 Testing went rather well. The new TOB suspension improved the all-terrain capability of the tank, making the tank ride more smoothly and consequently even further improving stability and accuracy on the move, but over time, two more promising suspensions appeared (a hydropneumatic one adapted from the MBT-70 and another called ATB with advanced torsion bars). However, after several rounds of tests neither was adopted, presumably because they were both quite costly.

What did make it to production was the new Fire Control System featuring:

With these changes, the M60A1E3 was approved for mass-production in May 1979 under the designation of 105mm Gun Full Tracked Combat Tank M60A3.

That didn't stop further development of the vehicle. As early as June 1978, a new gunner optics mechanism was standardized under the designation of Tank Thermal Sights, replacing the passive night sights and significantly improving the view range at night as well as being far better at operating in rain or fog. Starting from August 1979, several M60A3s were fitted with this device, creating a variant referred to as M60A3 (TTS). 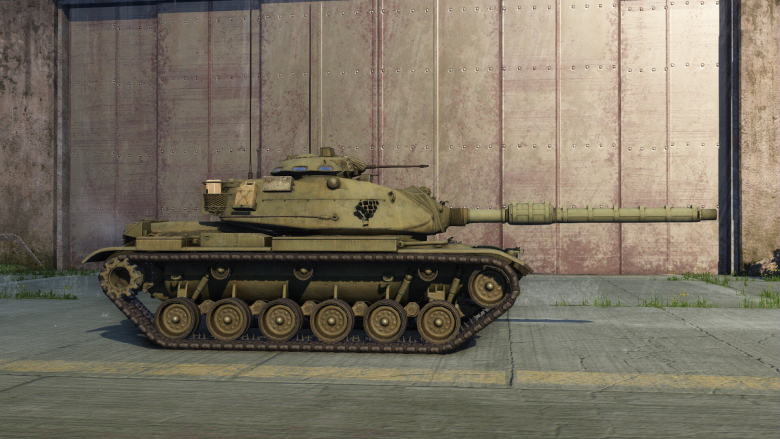 Another feature added later on was the engine smoke exhaust system, allowing the tank to generate thick clouds of smoke by injecting fuel into the exhaust system that was capable of quickly covering the tank from enemy sights (including infrared). And last but not least, there were several technical updates aimed mostly at increased reliability or safety:

With these improvements and with the MBT-70 cancelled, the M60 series remained the workhorse of the U.S. Army until the arrival of the Abrams Main Battle Tank.

The M60A3, much like its M60A1 predecessor, was a solid tank. The hull and the turret were both made of steel with the following thicknesses:

It was armed with the 105mm M68E1 rifled gun with thermal shroud that could depress to -10 and elevate to +20 degrees. The maximum rate of fire was approximately 7 rounds per minute with a good loader. 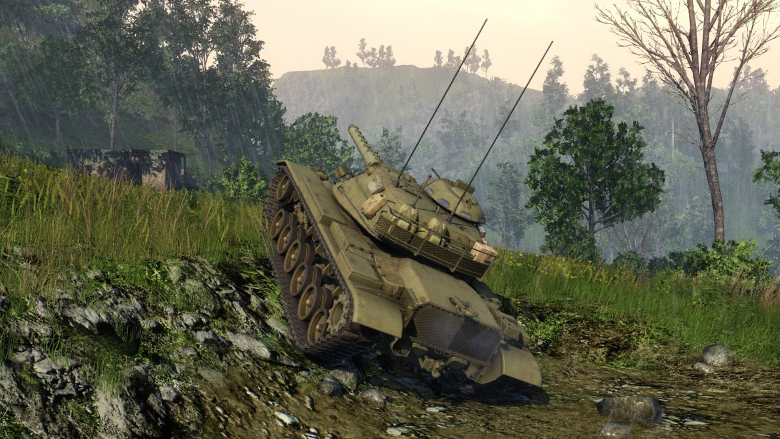 In the 1980s, the M60A3s in American service were stationed mostly in Europe. Applique armor and ERA were also available by the late 1980s, but at the time of Operation Desert Storm (the only large-scale combat use of the M60A3 in American service) the army was replacing M60s with the Abrams so the ERA kits only went to U.S. Marine Corps M60A1s – the U.S. Army M60A3s fought without them.

The M60A3 MBT did well in Iraq, but the same can be said about many other pieces of equipment in American hands. The Iraqi army stood little chance against the U.S. Army's superior training and technology and while this was the war to make the Abrams famous, the performance of its predecessor should not be underestimated. M60A1 and M60A3 105mm APFSDS rounds managed to knock out a large number of enemy tanks, including some T-72s, and it was the M60A3 that first entered Kuwait City, not an Abrams.

Desert Storm, however, was the swan song of the Pattons. The end of the Cold War meant that a large fleet of tanks ready to defeat the Soviets in Europe was no longer needed. At that point, the U.S. Army had some 9000 M60 series tanks available. Many were sold or even given away to other countries and what was left was replaced by the Abrams. The last active unit to replace the M60A3 with the Abrams was the 1st Battalion of the 365th Armored Company of the Kansas National Guard in May 1997. The leftover M60A3s in American service were then mothballed, sold off or scrapped.

After 1991, the release of large numbers of M60A3s for export made them an affordable option for countries unwilling to purchase Soviet equipment for whatever reason. This way the M60A3 ended up all over the world with notable numbers purchased by:

Other users include Portugal, Lebanon, Spain and several others. Austria got rid of its M60A3s and by the end of the 1990s had replaced them with Leopard 2s and Israel phased out its M60 variants by 2014.

Several notable M60 upgrades have appeared since the 1990s, including:

All of these vehicles are quite different from the standard M60A3 and may be covered in separate articles in the future. As for the stock M60A3, it is unfortunately completely obsolete on today's battlefield. The rise of modern threats (such as advanced anti-tank guided missiles) makes its protection levels woefully inadequate.

One of the advanced M60 variants, the Turkish Sabra, is currently used as part of the Turkish offensive in Syria and it is not performing very well – a number of these vehicles have already been knocked out, forcing the Turkish military to deploy the more powerful Leopard 2s instead and calling the entire future of the Sabra into question.

In Update 0.19, the M60A3 will be a Tier 5 choice, available from the Tier 4 M60A1 Patton, one of the newly introduced vehicles. Unlike the M60A2, the M60A3 will continue with the same gameplay style as the M60A1 MBT. Solid mobility combined with an accurate and powerful 105mm rifled gun offer players an alternative to the more alpha-oriented M60A2. For more information about Balance 2.0 changes, please check our series of Balance 2.0 articles.