The Type 85 Main Battle Tank is an evolution of the Type 80, which was discussed in our previous article. Unlike the Type 88, the Type 85 was built purely for export and it was actually relatively successful when it came to that, but it took a lot of time to achieve that success. 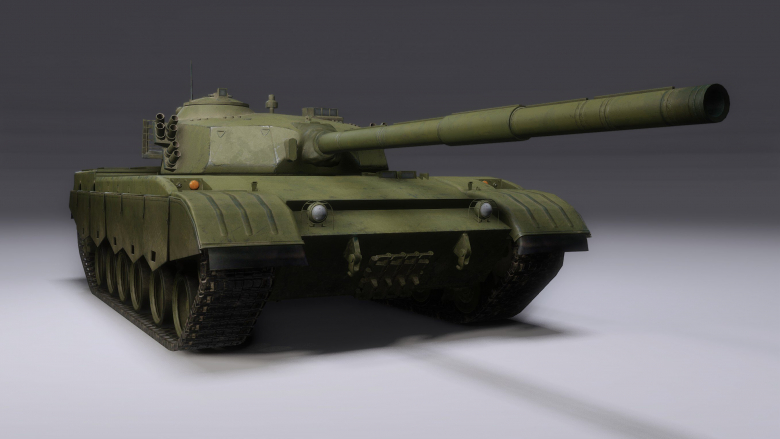 Type 85 development was not the first Chinese attempt at building an export tank, but all previous attempts had been based on the Type 59 chassis one way or another. They were highly successful too, with thousands sold to third world countries all around the world starting from the mid-1960s. Type 59 MBTs appeared in many major conflicts since the 1970s, including the Vietnam War, with reasonable success.

Improved versions, Type 69 and Type 79, also became export successes in the early 1980s with Iraq using hundreds of these affordable machines in the decade-long conflict with Iran. By the 1980s, the vehicle was, despite its upgrades, showing its age. The limited size of its cast turret did not allow it to significantly upgrade its firepower beyond a 105mm Type 83 gun (L7 clone) and any such attempts (for example to upgrade it with a 125mm gun) came at the expense of internal space and turret structural integrity. Holes had to be cut to house the larger weapon, compromising the turret's protection level, which wasn't very high for its time in the first place, as was amply demonstrated by the Americans during the Gulf War.

In short, the Type 59 platform upgrade potential was all but spent and a new solution had to be found. A new export platform that would not only carry modern weaponry and electronics (within reason, as the best equipment was generally reserved for the Chinese military) but also offer reasonable protection and, most importantly, have further upgrade potential, was needed. In 1988, when the Type 80 MBT was introduced, it was decided to develop the vehicle in two parallel branches. The first would be for limited domestic use and was called Type 88 in Chinese service. The second would be an export version called Type 85.

It's worth noting that when it came to military equipment, China had a policy of not releasing such weapons for export for a decade or so after their development. While the Type 83 gun was, as its name suggests, introduced around 1982-1983, its "development" (reverse-engineering) began in 1979 and thus the 10 year export moratorium ended around 1988-1989.

The initial prototype of this new tank was, once again, developed by NORINCO and was based on the Type 80-II (an upgraded Type 80 with a better Fire Control System and other improved elements), which had also been introduced by 1988. Development took place between 1988 and 1989.

The reason behind the prototype's development was actually rather complex. Initially, NORINCO intended to export the Type 80-II as it was, but during trials they discovered several major problems with it compared to western export types. One problem involved maintenance and reliability. On average, engine repair took four times as long as on the AMX-32 for example. These and other issues were to be addressed in the new prototype that was ready by 1989 and is known under the designations of Storm-1 and Type 85-I.

The designation is of interest in itself. When it comes to the "Type" nomenclature, vehicles are often named after the year of their development or (for service models) introduction to service, so the name should have been Type 88 or Type 89 rather than Type 85, but the developers felt the tank was not on par with the best available in 1989. Type 88 was already taken and thus it was decided to "downgrade" the Type 89 to Type 85 to reflect its qualities rather than the year of development.

The biggest difference between the Type 80-II and the Storm-1 export tank was the brand new, electrically-traversed, welded turret featuring composite armor, which made it more resistant to HEAT shells. This turret was larger, better protected and, most importantly, supported future upgrades to larger weapons (including a 125mm gun). Another important factor was that the round, cast turret was not scalable using the technology the Chinese had at their disposal. The old cast turrets were effective against obsolete APCBC ammunition and even with it the non-penetrations could kill the crew just as well. The Chinese performed such testing on monkeys and found that such hits caused them to become stunned, or worse. 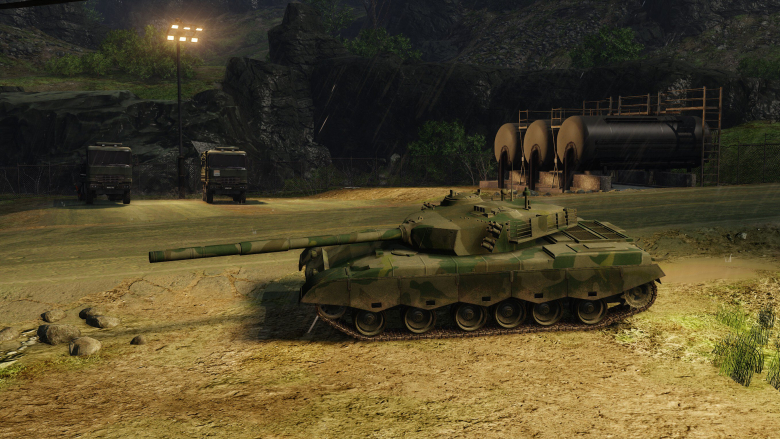 The Storm-1 tank was generally not a success. It was unreliable and underpowered – the Type 80-II was equipped with a more powerful 790-800hp engine (depending on sources) and the developers felt that it was not really up to their expectations. It remained at the prototype stage and can today be seen in the Beijing military museum.

Undeterred, NORINCO developers made a number of changes to the Storm-1 tank that included:

This version became known as Storm-2 or Type 85-II (factory designation WZ-1227F2). By May 1990, two prototypes had been built and sent abroad to an undisclosed country for harsh trials. These trials unveiled a number of flaws and unfortunately introduced the vehicle to potential customers (likely Pakistan) in its raw and unfinished form. As a result, Storm-2 met the same fate as its older sibling and remained at the prototype stage. The trials did spark Pakistani interest in the vehicle. Pakistan subsequently requested a number of changes that were included into the vehicle to produce the version known as Type 85-IIAP (P stands for Pakistan) or Type-85-IIM. 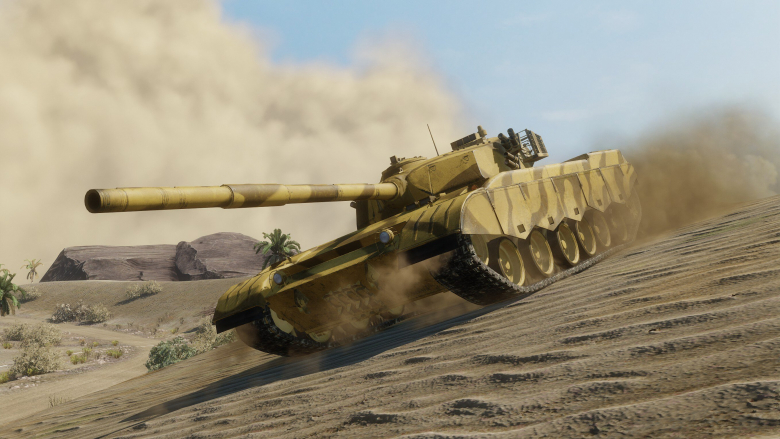 This vehicle was a significant improvement on the Storm-2 prototype. According to the Chinese, the biggest factor in adopting a new MBT for potential customers was improved firepower tied to a modern FCS, which is why for the Type-85-IIM the main weapon was replaced with a 125mm Type 83 smoothbore gun (it is worth noting that the name of the gun in some western sources appears to be Type 85, but that is incorrect). This gun was automatically loaded, which is why the crew was reduced from 4 to 3 members (the commander and the gunner were located in the turret, the driver in the hull).

The gun was a copy of the Soviet 2A46, which had been reverse-engineered from a Romanian T-72 that was given to China after the Romanian-Soviet political split of the 1980s. It could depress to -6 degrees, elevate to +14 degrees and had a rate of fire of some 8 rounds per minute. The main round fired was a NORINCO-developed 1730 m/s APFSDS round that can allegedly penetrate 500mm of RHAe at 2km. The tank could fire standard Warsaw Pact 125mm rounds as well.

It was controlled by the new ISFCS-212 fire control system that allowed it to perform in roughly the same way as the Russian export tanks of the same time.

The engine was at first upgraded to 800hp (the 121150Z used in the Type 80-II), but Pakistan wanted 1000hp. Unfortunately, such a powerful engine was initially unavailable and only came later in the form of a new turbo-diesel. Maximum speed originally remained at 57 km/h (despite a weight increase to 41 tons), but the new engine increased it to 65 km/h. 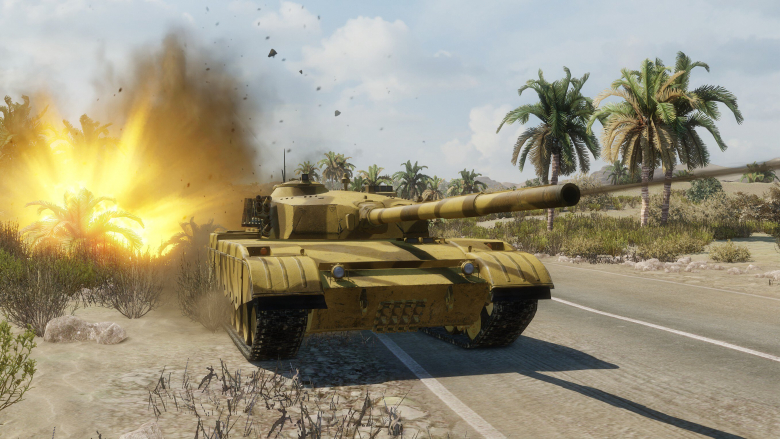 Hull protection remained the same as on the Type 80-II (non-composite steel). An ERA kit only appeared on the Type 85-III prototype, which never got to mass production.

Pakistan purchased two hundred Type 85-IIAPs. The deal was closed in 1991 and the first vehicles appeared in public during the March 1993 military parade in Islamabad. The vehicle has not participated in any fighting yet, which is why its performance is difficult to establish, but it continues to serve there. Starting in 2001, it was upgraded with new thermal imagers by BAE Systems to replace the older night vision devices, improving combat value. However, by today's standards, the tank is obsolete.

In Armored Warfare, the Type 85-IIM is a Tier 5 Main Battle Tank. Like its Type 80-II predecessor, it is rather sluggish, but features excellent firepower and large damage per shot values. This combination makes it an excellent mid-range support vehicle. It has a good camouflage factor for a Main Battle Tank of its tier and, thanks to its good gun depression, it can use terrain obstacles to ambush its enemies.