By the 1980s, the Leopard 2 was without doubt one of the most powerful Main Battle Tanks in the world. But even as the latest production variant (Leopard 2A4) rolled off the assembly lines, NATO military leaders were receiving reports of new, deadly Soviet tanks. It was clear that the Leopard 2A4 would sooner or later become obsolete when facing such threats and it was decided that a new, vastly improved variant was needed. 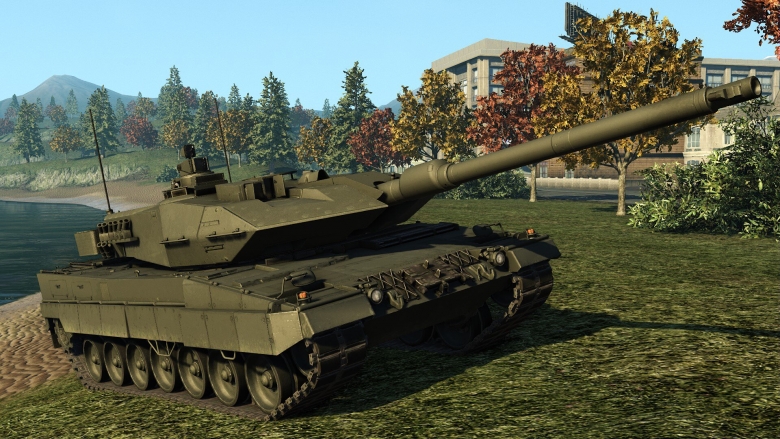 The program is for the most part still classified and little has been published about it in the past. It ran in the 1980s and 1990s and featured a large number of proposals to improve the existing Leopard 2 vehicles. Some were radically different, including a variant with the gun placed to the side of the turret axis or with a remotely controlled gun – but all were ultimately unsuccessful because they failed to provide a significant upgrade over the Leopard 2 tank and would take too long to implement.

As the 1980s came to an end, the general German consensus was that an upgrade to the existing Leopard 2 design was preferable to designing a completely new vehicle for the abovementioned reasons. The entire Halbgenerationenwechsel concept was cancelled as a result and it was decided only one Main Battle Tank type would be used for German purposes in the future – the Leopard 2.

There was still the matter of increasing the vehicle's combat capability. To that end, a program called KWS (Kampfwertsteigerung – combat value improvement) was established. 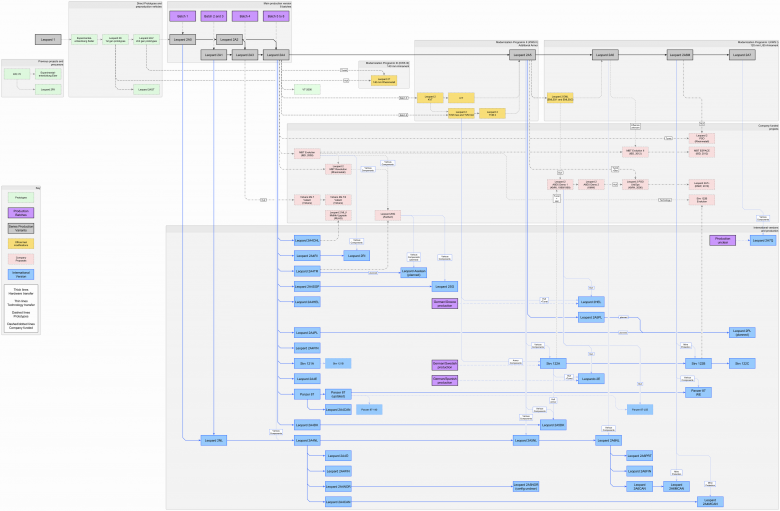 The Leopard 2 KVT testbed was built as part of it in 1989. KVT stands for Komponentenversuchsträger – component trial vehicle. The Leopard 2 KVT was built from the last Leopard 2A4 produced as part of the fifth production run (December 1985 to March 1987, 370 vehicles in total) – vehicle no.20825. The following modifications were added to the vehicle:

As a result, the weight of the vehicle increased from the original 55 tons to 60.5 tons. This vehicle passed the trials and was subsequently converted to the Leopard 2 IVT (Instrumentenversuchsträger – instrument trial vehicle), which became part of the joint German-American IFIS integrated command research that ran between 1988 and 1992.

The KVT stage research was used for the next step in the KWS program. This time, two eighth production run Leopard 2A4 vehicles (built in 1991, vehicle nos. 11156 and 11157) were used – they were both referred to as TVM (Truppenversuchsmuster – troop trial testbed). The second vehicle especially (referred to as TVM max) was upgraded with cutting edge electronics and, as a result, was potentially very expensive. Both were extensively tested between December 1991 and April 1992 in Aachen.

Times were, however, changing. The fall of the Soviet Union had a dramatic impact on all NATO military budgets. Without the threat of Soviet invasion, many military analysts believed the age of the tank was over and that the future belonged to light, mobile forces. Tank development funding began to dwindle.

The KWS program was subsequently divided into three stages – KWS I, KWS II and KWS III. Each stage focused on a different aspect of Leopard 2 improvement:

This development program led to a breakthrough conference in Mannheim, after which, on March 30 1992, Germany, the Netherlands and Switzerland signed a contract defining what the future Leopard variant was to look like. A single fifth production run Leopard 2A4 (vehicle no.20823) was then rebuilt as a testbed under the designation of TVM 2 to correspond to the Mannheim Configuration. It was heavily tested between 1993 and 1994. Compared to the TVM max and KWS II, the Mannheim configuration was a downgrade – additional hull armor, for example, was removed due to budget constraints.

It's worth noting that Sweden – a Leopard 2A4 user – did not accept the Mannheim configuration and chose instead to implement the TVM max configuration along with the additional hull and turret roof armor for its next Main Battle Tank. This is why the Swedish improved Leopard 2 (Strv 122) is better armored than the German Leopard 2A5. 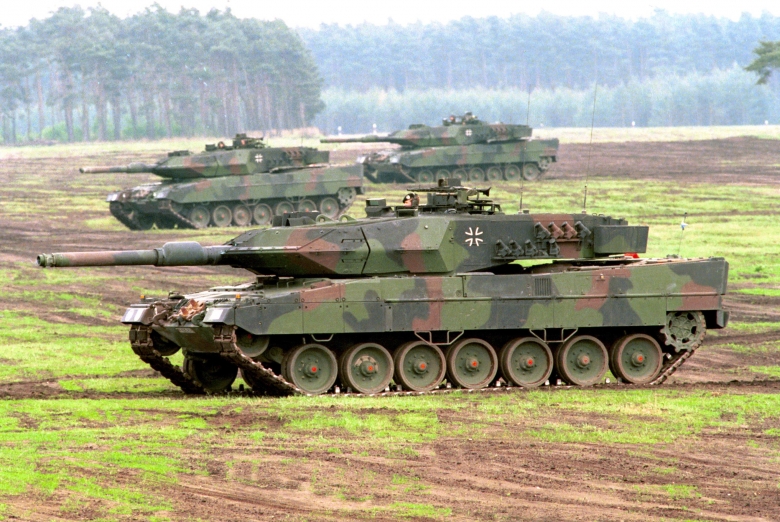 As a result of 1993-1994 tests, Germany and Krauss-Maffei signed a contract on December 29 1993 to convert the first 225 Leopard 2A4s from the sixth production run on to the Mannheim Configuration standard, now referred to as the Leopard 2A5. At the same time, the Netherlands signed a contract to convert 330 vehicles.

The most notable difference between the pre-2A5 Leopard 2s and the Leopard 2A5 is the wedge-shaped frontal turret spaced armor with a completely overhauled gun mantlet.

The electric driver's hatch was taken from the KVT program. The driver also has a rear-facing camera, allowing him to reverse much quicker than in the previous versions of the Leopard 2, where he had to depend on the commander for instructions.

These changes did increase vehicle weight to 59.5 tons, but the mobility of the vehicle was not impacted. The Leopard 2A5 is still armed with the 120mm L/44 smoothbore cannon by Rheinmetall, although two 2A5s were experimentally armed with the L/55, marking the start of the Leopard 2A6 development.

As for the conversion, the reason why only the newer Leopards 2A4 were selected for conversion was the use of the so-called D-Technologie. Batch 6 or newer Leopard 2s have improved armor composition compared to the older production runs (regardless of their later upgrade to the 2A4 standard), although all details are classified. It's worth noting that only Batch 6+ hulls were used in the conversion program, the turrets were taken from Batch 1 to 4, their armor layout improved. The leftover Batch 1 to 4 hulls were then mated with the leftover Batch 6+ turrets and offered for export.

The first converted Leopard 2A5s were transferred to the Bundeswehr on November 30 1995 and eventually a number of these vehicles became available for export, although not in numbers comparable to the popular Leopard 2A4 variant.

Unlike its real life counterpart, the Tier 8 Leopard 2A5 in Armored Warfare has two gun options – the 120mm L/44 smoothbore and the L/55, making the top configuration of the vehicle comparable to the Leopard 2A6. It is also the last vehicle of the Leopard line that can be unlocked by using standard methods – the Tier 9 Leopard 2A6 is available via a token.

It's worth noting that the stock gun (L/44) can only fire APFSDS shells and LAHAT tandem guided missiles, while the upgraded gun (L/55) can fire all standard types of shells – APFSDS, HE, HEAT and the LAHAT guided missiles. One of the best features of the Leopard 2A5 is the gun depression (-10 degrees), allowing players to exploit rough terrain while keeping the hull hidden behind an obstacle. 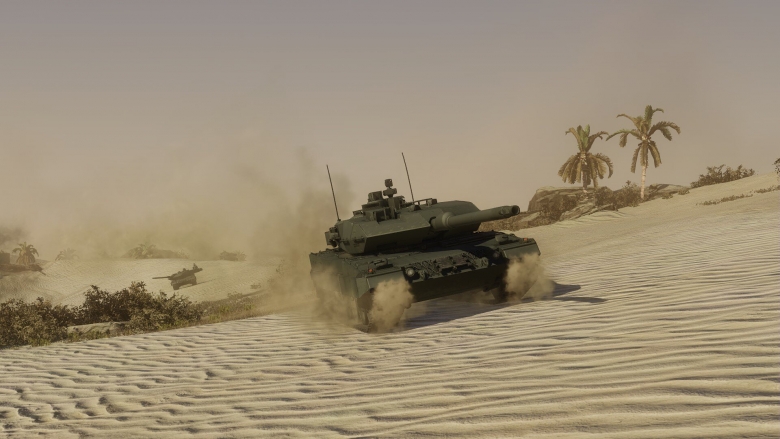 Even though the nominal armor values might not suggest it, the Leopard 2A5 is one of the best frontally protected MBTs of its tier in Armored Warfare. The turret especially is extremely durable thanks to the combination of its spaced armor configuration and composite armor coefficient.

The hull is somewhat weaker and does have weakspots, but the vehicle's defensive capabilities are enhanced by the presence of an Active Protection System and the Smoke Grenade launcher. Like with the lower tier Leopard 2s, players have to be careful not to expose thin flanks to the enemy. The mobility of the vehicle is quite good – with its top engine (the MT883 Diesel), it can reach a maximum speed of 72 km/h in 5.9 seconds. The hull traverse is superior to that of the M1A1 Abrams. 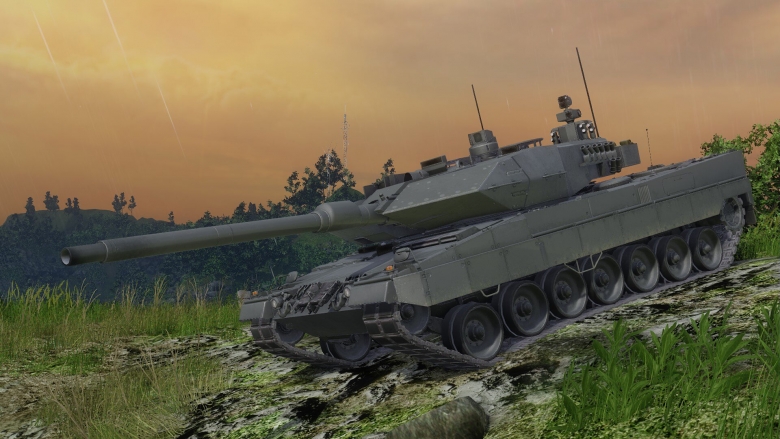 Drawbacks include having only three retrofit slots, compared to the four the M1A1 Abrams can use, and one of the lower penetrations on the tier. The gun, on the other hand, is fairly accurate and the Leopard 2A5 has to use that to its advantage by aiming at the weakspots of enemy vehicles. The large assortment of shells available ensures that a Leopard 2A5 player will always have the right tool for the job.

All in all, the Leopard 2A5 is a rather universal vehicle that excels in almost every role in capable hands.