Following the development of Leopard 2 prototypes and extensive testing of the vehicle in the United States in the form of the Leopard 2AV, the Leopard 2 was approved for mass production in September 1977 as the future Main Battle Tank of the German Army (Bundeswehr). What started as a replacement for the aging German M48 Patton became one of the most successful MBTs ever built. 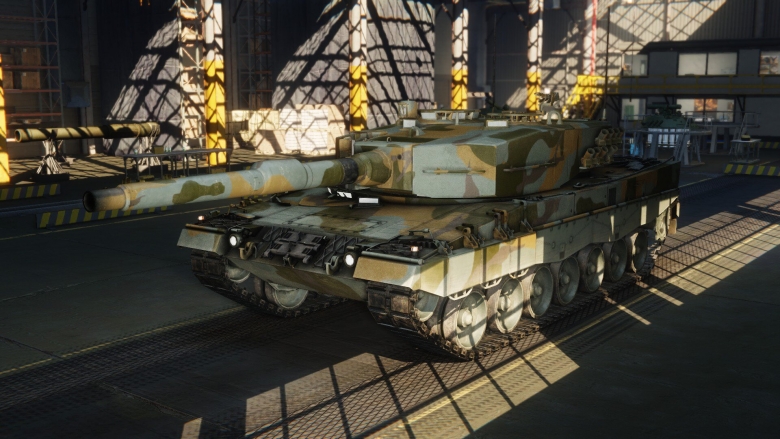 The first production Leopard 2 was delivered to the Bundeswehr for testing in 1978, nearly 40 years ago. The Bundeswehr officially received its first Leopard 2 MBT (fourth built) on October 25 1979.

The Armored Warfare Tier 7 Leopard 2 covers the initial variants of the Leopard 2 up until Leopard 2A4 modernization (the first major Leopard 2 upgrade). The initial 1977 Leopard 2 production plan called on 1800 vehicles to be built and production consisted of eight production runs (batches).

These initial batch Leopard 2s are usually only referred to as Leopard 2, or sometimes Leopard 2A0. The latter designation will be used in this article to avoid confusion with other Leopard 2 variants. 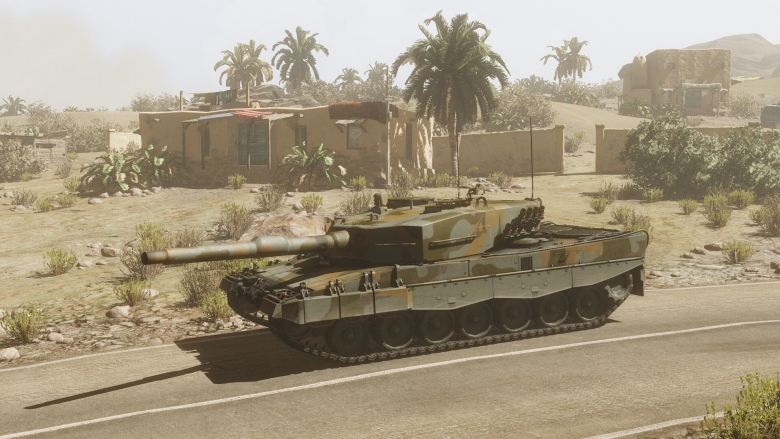 The Leopard 2A0 was very well protected. It did not use a reactive armor kit, but the majority of its protection was offered by an advanced system of multi-layer spaced armor plates covering the hull and the turret. The sides were covered by thick armored skirts where the frontal part especially offered additional protection in the most exposed angle of engagement. Actual armor effectiveness and layout is still classified. Protection was further enhanced by eight 76mm Wegmann smoke mortars in two groups of four, installed on the sides of the turret.

The vehicle wasn't the heaviest either with a combat weight of 55 tons. It carried a crew of four men (commander, gunner, loader and driver). The suspension consisted of seven roadwheels and four return rollers. The tracks were traditionally supplied by Diehl (the Diehl 570F model). The vehicle was powered by a 1500hp 47.6 liter MTU MB 873 Ka-501 turbodiesel engine paired with a Renk HSWL 354 hydro-kinetic planetary gearbox, giving it a respectable power-to-weight ratio of 27.27 hp/t and allowing it to go as fast as 68 km/h (31 km/h in reverse). Fuel consumption was approximately 300 liters per 100 km on roads and 500 liters per 100 km in rough terrain. 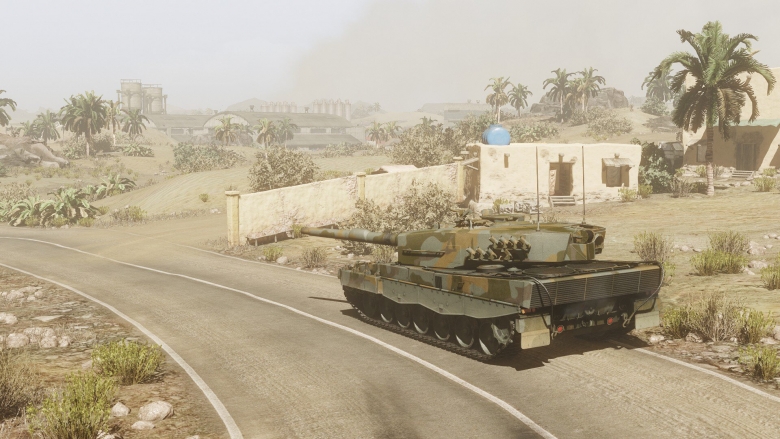 The Leopard 2A0 was armed with the excellent Rheinmetall L/44 smoothbore gun, moved by the WNA-H22 electro-hydraulic gun control system. The gun was controlled by the EMES15/FLT-2 Fire Control System and was fully stabilized. Two types of ammunition were used – an APFSDS-T round (DM33) and a multi-purpose HEAT round (DM12 MZ), both by Rheinmetall. The vehicle carried 42 rounds (15 in turret bustle). To improve its night-fighting capabilities, 200 of the first production run vehicles were equipped with a PZB 200 low level TV system, a stopgap measure before the arrival of more advanced night fighting solutions.

The first batch vehicles (pre-modernization) can be typically recognized by a tall crosswind sensor on the top of the turret, which was removed in later variants.

The second production run (Batch 2 – March 1982 to November 1983) consisted of 450 vehicles, built by Krauss-Maffei (248) and MaK (202). These vehicles were of the Leopard 2A1 variant. There were a number of differences compared to the Leopard 2A0. The crosswind sensor was removed from the top of the turret for one, but most important was the addition of thermal sights, replacing the ineffective PZB200. The sights were originally designed by Texas Instruments and were produced by the Carl Zeiss company as part of an American-German military cooperation program. Apart from that, there were a number of smaller internal changes, such as the ammo rack redesign, external crew comm system headsets on the sides of the turret etc.

The third production run (Batch 3 – November 1983 to November 1984) consisted of 300 slightly modified Leopard 2A1s. They are not easy to distinguish from the Batch 2 Leopards 2A1 as the changes are very small – for example, elevation of the commander's panoramic sights by 5cm.

The fourth production run (Batch 4 – December 1984 to December 1985) consisted of 300 more vehicles. They were based on the Leopard 2A1, but they received new SEM 80/90 VHF radios and slightly different exhaust grilles. Along with these changes, the Batch 4 vehicles received a new Bronze Green, Leather Brown and Tar Black camouflage pattern. Additionally, ammunition supply hatches were welded shut for protection reasons (it turned out they could be damaged upon turret hit, causing the seals to leak and making the vehicle impossible to pressurize for NBC protection). These modified Leopard 2A1s were designated Leopard 2A3. 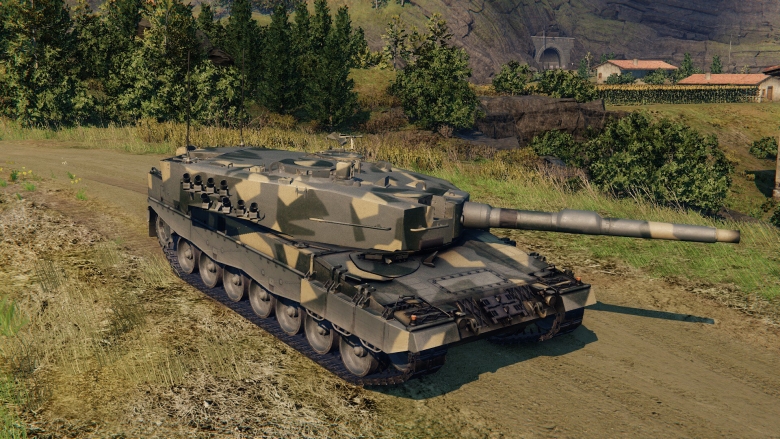 The fifth production run (Batch 5 – December 1985 to March 1987, 370 vehicles in total) marks the introduction of the Leopard 2A4. This Leopard 2 variant was the first major modernization of the vehicle. The main difference from the previous models was the introduction of a digital Fire Control System as well as a new explosion suppression system by Deugra (increasing crew survivability). The vehicle also had a slightly overworked suspension with the second and third return rollers moved by one roadwheel to the back.

At this point, nearly a decade after the approval of the November 1977 plan, the 1800 vehicles had been built in the five abovementioned production runs. The success of the vehicle and the need to replace the Leopard 1A4s of the 10th Panzer Division caused the German military to reconsider the initial number and a new order for the sixth production run was made in June 1987. The production of Batch 6 ran from January 1988 to May 1989 with 150 more vehicles built. These were modified Leopard 2A4s with new Diehl 570FT tracks, different box-shaped frontal sections for the side skirts, maintenance-free batteries and new paint. Leopard Batch 6 was immediately followed by a seventh production run (Batch 7 - May 1989 to April 1990, 100 Leopard 2A4 vehicles identical to Batch 6) and finally an eighth production run of 75 vehicles from January 1991 to March 1992.

The Batch 8 vehicles were slightly modified yet again. The biggest visual change was the Muzzle Reference System mirror on the right side of the gun as well as a different design for the vehicle's side skirts. The final Leopard 2A4 of Batch 8 was delivered to the Bundeswehr on March 19 1992, ending Leopard 2 production for Germany with 2125 vehicles built. Around the same time, Batch 1 to 4 Leopard 2s were improved by the introduction of a new radio and new tracks. They were also given the ability to fire the DM33 tungsten rod APFSDS round. 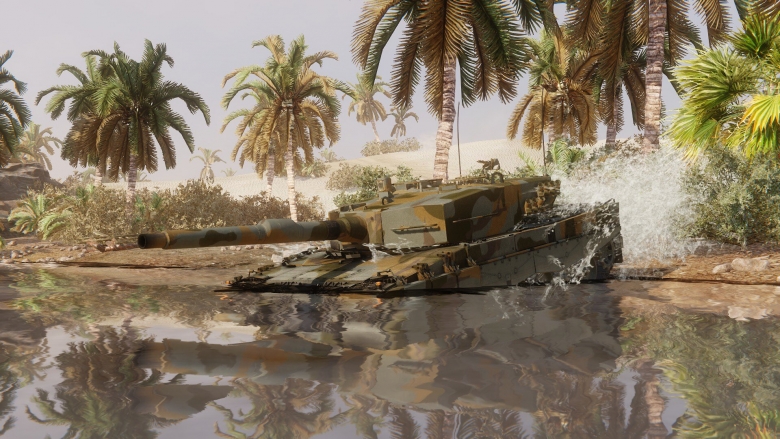 These improved vehicles were also renamed Leopard 2A4s, but they weren't, for example, given the fire suppression system of the "original" 2A4. As a result, there were several sub-types of the Leopard 2A4, despite all vehicles bearing the same designation. All German Leopard 2s had been improved to the 2A4 standard by 1993, making it the most widely used Leopard 2 model to this day.

The abovementioned production numbers are not final – the Leopard 2 was a successful export item and was also built (either in Germany or locally assembled) for several other countries. The earliest customer was the Netherlands. Between 1981 and 1985 (in parallel to Batch 1 to 5), 445 Leopard 2s (technically equal to the Batch 2 German variant) were built, partially in Germany and partially under license in the Netherlands. 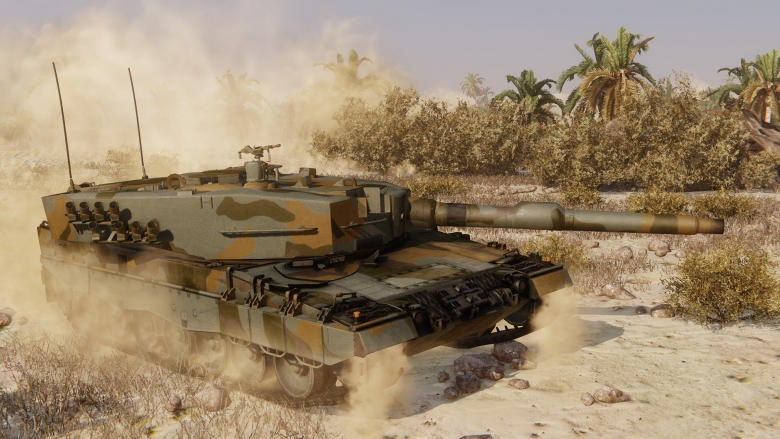 Another major customer was Switzerland with 380 Leopard 2A4 variant vehicles built in Germany (35) and under license in Thun (345) in 1987. License production of the Leopard 2 also ran in Greece (170) and Spain (219). However, these are the more modern variants that go beyond the scope of this article. The total number of Leopard 2s produced is therefore around 3300 vehicles.

Other countries opted to simply purchase Leopard 2A4s from German stocks. The vehicles sold were primarily the early Batch 1 to 4 tanks, modernized to the 2A4 standard. Apart from the abovementioned countries, the former or current users of the Leopard 2A4 variant include:

Despite the large number of Leopard 2A4s exported, the vehicle probably never fired a shot in anger, although later variants saw service in Kosovo, Bosnia-Herzegovina and Afghanistan. That might still change, however, as some reports indicate that Turkish Leopard 2A4s are being deployed along with Turkish M60s in the offensive in Syria.

Much like its Tier 6 Leopard 2AV predecessor, the Tier 7 Leopard 2 MBT in Armored Warfare is a durable and relatively mobile machine. In contrast to the Leopard 2AV, the armor of the Leopard 2 is composite, offering additional protection against HEAT shells and guided missiles and significantly improving the vehicle's survivability, despite the fact that it lacks an ERA kit. Survivability is further enhanced by an optional APS system and a smoke grenade launcher. 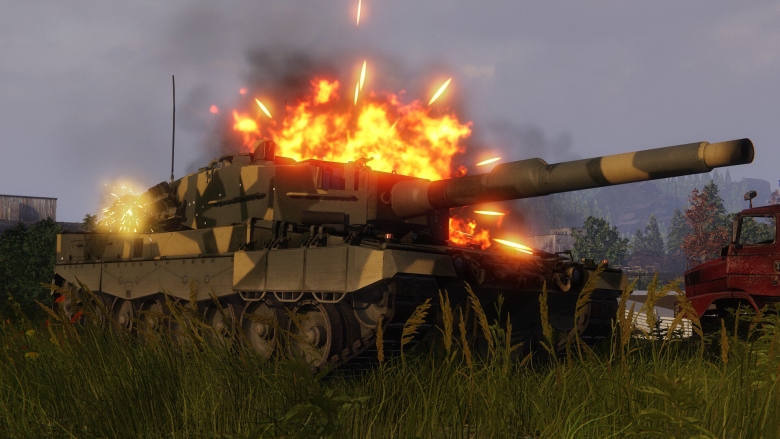 Firepower was improved to the 120mm L/44 Rheinmetall smoothbore, capable of firing APFSDS and HEAT rounds as well as LAHAT guided missiles. Mobility is also very good thanks to the two improved engines.

The only real weakness of the Leopard 2 is the side armor. Even with the composite armor modifier bonus, the sides are very thin and the best tactic is to keep them hidden from enemies, as even autocannon rounds have a chance of penetrating the thin flanks of this tank. Much like with the Leopard 2AV, the best tactic is to protect your hull sides and only expose your turret and hull front to the enemy.

We hope you enjoy playing this vehicle and will see you on the battlefield!