Menu
Play now
The Begleitpanzer 57 is one of the lesser known German attempts to create an infantry fire support vehicle on the German Marder IFV chassis. It was not accepted in service but a single prototype was made.

The Begleitpanzer 57 started – as was mentioned above – as a project with the goal of creating a viable and practical armored infantry fire support vehicle using the components already produced for the Marder IFV. It was a private venture for two companies –Thyssen-Henschel (the developer of the original Marder) and Bofors (which provided the gun). Interestingly, this was a purely commercial private project – there was no request made by Bundeswehr (or any military) to actually build such a vehicle. Both companies believed that the relatively cheap yet powerful vehicle would find its niche on the armor market, especially in South America.

A prototype was built and introduced to the Bundeswehr officials on 30th of November 1977. It was constructed on the hull of a prototype Marder (the same hull that was used to actually build the TAM prototype, it was somewhat modified compared to the mass-produced Marder version) – the hull itself had following dimensions:

The Marder prototype chassis had only quite light frontal armor capable of stopping only Soviet autocannon shells (up to 30mm) and heavy machinegun rounds (14.5mm AP rounds):

The most interesting part of the vehicle, however, was its weaponry. The vehicle was armed with a 57mm Bofors L/70 Mk.1 automatic cannon, originally designed for ships with automatic feed, that could fire 200 57x438R HE rounds per minute at 1020 m/s. Other types of ammunition included AP rounds, semi-AP rounds (950 m/s) and the advanced 3P rounds (1035 m/s, programmable, pre-fragmented, proximity-fuzed). With the modern fire control system and the gun mount depression/elevation (-8/+45), the gun could engage ground targets as well as helicopters thanks to its integrated helicopter sensor. In order to knock out enemy armor, the vehicle was also armed with a TOW missile launcher. Ammunition capacity consisted of 48 rounds in the two feeders (in total the vehicle carried around 100 rounds) and 6 anti-tank guided missiles. The gunner could select between the two feeders (each had 24 rounds). 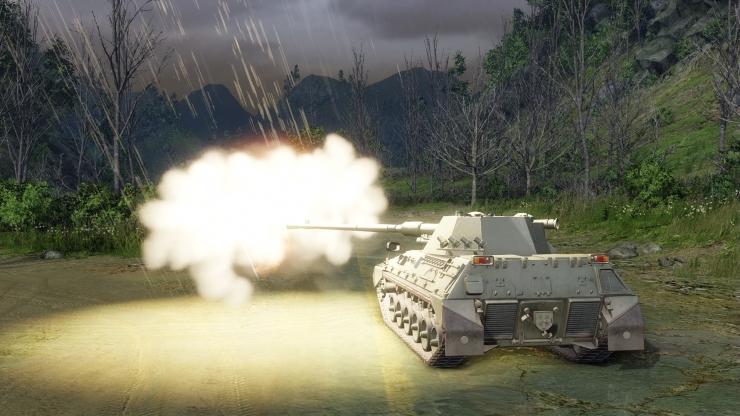 The prototype was never mass-produced as no potential buyers showed any serious interest in this vehicle. The Bundeswehr itself refused the vehicle based upon the unclear military doctrine for its use and it was probably disassembled after some time.

In Armored Warfare Early Access 4, the Begleitpanzer 57 will be represented as a Tier 5 light tanks in the Marat Shishkin Light Tanks branch between the Sheridan and the Stingray. While lightly armored, its excellent mobility and its accuracy on the move will be very helpful. Unlike the prototype, the ingame variant will be able to use the later supercharged Marder variant of the engine (output was increased from 600 to 710 hp). The vehicle will be able to fire both the main 57mm gun (using a wide variety of ammunition) and the TOW launcher, making this light tank a deadly opponent in any situation. Although somewhat fragile, the Begleitpanzer 57 will be able to deploy a smokescreen launcher to protect itself against its enemies.

The vehicle is characterized by a very high sustained damage value thanks to high rate automatic cannon fire for its caliber and by excellent mobility.

You will be able to play with the Begleitpanzer 57 during the Early Access 4 phase of Armored Warfare testing.