Dragoon 300 is one of the many not quite remarkable workhorse vehicles that passed unnoticed through history. It didn't win any great battles, it wasn't instrumental to grand victories, nor was it built in large numbers – it did, however, achieve its purpose. It did exactly what it was supposed to and it did it well. 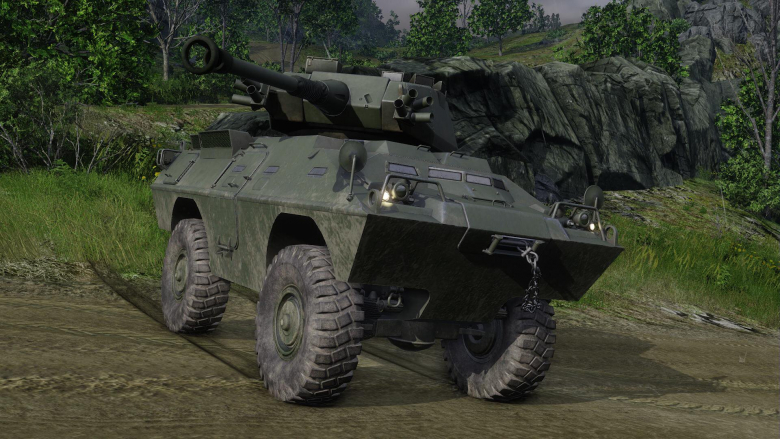 While the Dragoon from Armored Warfare is essentially a 1980s vehicle, its history began back in the 1970s. In 1976, the United States Army Military Police Corps was looking to purchase a considerable number of multi-purpose light armored vehicles. Their requirements weren't very specific, basically they wanted a steel box on four wheels capable of withstanding small arms fire. It needed to be air-transportable to a degree (via a C-130 plane) and was to be used for base protection and convoy escort duties.

Likely inspired by the success of Cadillac-Gage's LAV-150, the Verne Corporation decided to take a shot at it and bring its own design to the table – a vehicle they referred to simply as Dragoon. The original Dragoon from the 1970s generally resembled the LAV-150, although there were some notable differences. For one, it was larger, which could be an advantage or a flaw, depending on how you looked at it. The bigger size made it more of a target, but the platform could in theory carry larger weapon systems, creating a basis for an entire vehicle family.

Secondly, it used some of the components of vehicles the U.S. military operated at the time, specifically the M113 APC and the M809 truck – in theory, this it made it easier to maintain and cheaper on the upkeep with the share of common parts reaching 70 percent according to Arrowpointe promo materials. It was probably less in reality and the advantage only decreased as the M113 and M809 were gradually phased out. Needless to say, there was no advantage for countries that were not equipped with these two specific vehicles.

In any case, for reasons unknown, the 1976 request from the Military Police Corps was withdrawn. Multiple sources speculate that it was because of budget cuts following the effectively lost conflict in Vietnam. Furthermore, military police would not be asked to operate on actively hostile territory anymore, making the demand itself more or less obsolete. By all rights this was to be the end of the Dragoon – only it wasn't.

Undeterred by this setback, the Verne Corporation teamed up with the Arrowpointe Corporation to offer the vehicle to third party customers instead. Verne was responsible for development and Arrowpointe for marketing (Arrowpointe is sometimes incorrectly named as the actual producer of the Dragoon). The first two Dragoon prototypes were ready in 1978 under the marketing name of Dragoon 300.

The Dragoon was a rather light 4x4 wheeled vehicle that in its standard form weighed some 12.7 tons (two tons more than the LAV-150). It had a basic crew of 3 (driver, gunner, commander) and could carry a number of troops, ranging from 6 to 10 men, depending on configuration.

Like the other vehicles of this class, its XAR-30 steel armor only protected it only from basic small arms threats (7.62mm or smaller) and from shrapnel – in today's terms, the protection level would be roughly STANAG 4569 Level 1.

The vehicle had a simple and rugged design and was powered by a Detroit Diesel 6V-53T 300hp V6 turbocharged engine, allowing it to go as fast as 115 km/h on flat surfaces. The transmission was automatic and power could be transferred to all four wheels if needed. 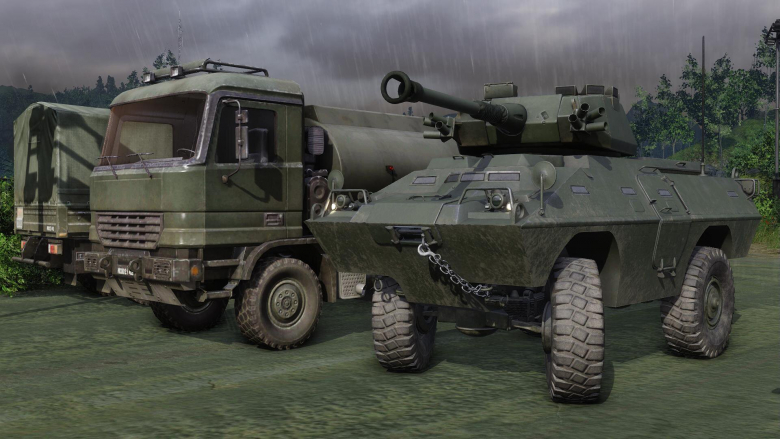 Interestingly enough, the vehicle was also amphibious, although in reality it was only capable of crossing very calm waters with a maximum swimming speed of some 5 km/h. As it depended heavily on local conditions, this function was not very practical.

The basic armament of the APC version consisted of a single .50cal Browning M2 heavy machinegun, using the same type of pintle as the M113. However, multiple versions were offered, including:

And several more. The version included in Armored Warfare is the Heavy Fire Support Vehicle variant with a two-man turret and a Belgian 90mm Cockerill gun. This variant is listed under several designations with the Light Forces Vehicle-90 (or LFV-90) being the most common. The turret was actually not a Cockerill licensed variant, it was built by Verne (and later AV Technologies) using the same high-hardness XAR-30 steel. The fire control system for the weapon was basic, as were the optics (the gunner used the M36E1 model sights), although the whole system could be upgraded with more advanced electronics, including a thermal imager – for a price, of course. The turret featured a ready rack with 10 rounds and carried another 50 rounds inside the vehicle.

The two 1978 prototypes weren't scrapped, but transferred to U.S. Army for further testing as part of the 9th Infantry Division High Technology Test Bed program. After several years, Arrowpointe was finally able to convince the U.S. Army and the U.S. Navy to give their vehicles a try and the first several production Dragoons were sold to the latter in 1983. The U.S. Navy used them in the role they were intended for – base protection (a nuclear base in Alaska no less) and during some limited patrolling.

For such a rocky start, the Dragoon vehicle series was remarkably long-lived with the last of the Dragoons being delivered as late as 2002. In 1988, the Patroller police variant was introduced and it caught the attention of several American police forces. Non-American customers included:

Turkey probably purchased the most with some 140 vehicles ordered for the Turkish police in 1998. An upgraded version designated Dragoon 2 also appeared in 1997, featuring advanced features such as improved tires, armor, improved suspension, upgraded heating and air conditioning and a number of other improvements. Overall it is estimated that some 400 Dragoons were built between 1982 and 2002.

In 2002, General Dynamics Land Systems announced the completion of the program with no new Dragoons produced. The vehicle was offered for several more years with production capacity available in Spain (General Dynamics Santa Bárbara Sistemas) until it stopped being offered in around 2008. 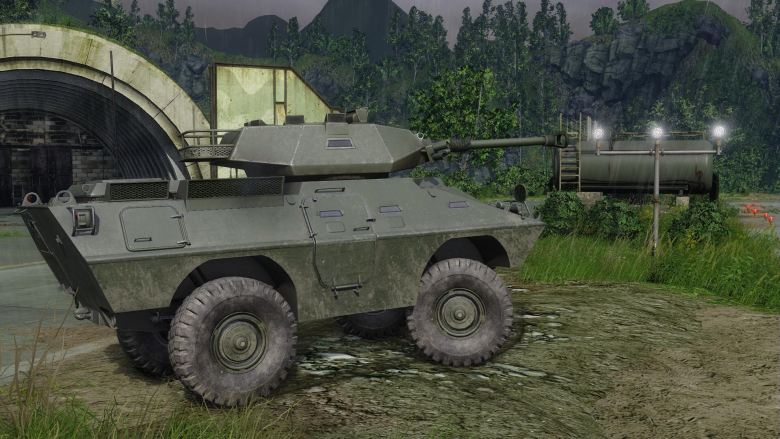 In Armored Warfare, the Dragoon 300 is a Tier 3 Tank Destroyer. It is one of the first vehicles of the four-wheeled gameplay style players will encounter on the battlefield. Its high agility combined with wheeled driving mechanics take a while to master, but dedicated players will be rewarded with an extremely agile vehicle with excellent firepower. Its thin armor naturally means operators should try to stay away from harm as much as possible, but, in skilled hands, the Dragoon 300 becomes a lethal weapon.