The M8 Thunderbolt Tier 9 Light Tank is a successor to the M8 Buford (formerly called XM8 Armored Gun System in Armored Warfare) and an evolution of this vehicle. 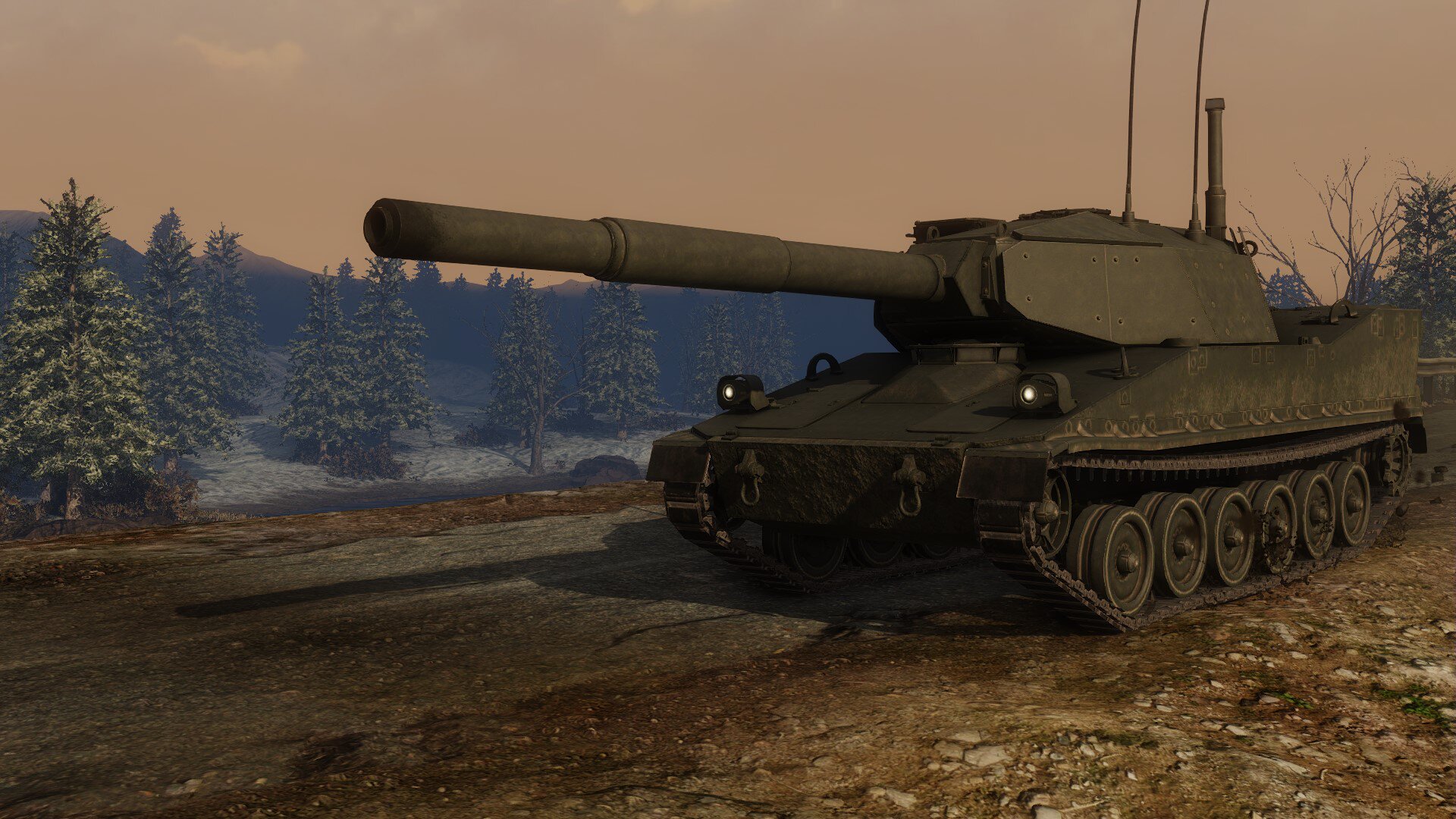 To sum up the development of the XM8 program:

From the 1970s to the 1990s, the standard light tank of the U.S. Army was the M551 Sheridan. Although it performed reasonably well in the conflicts it took part in; the Sheridan was not the most successful American vehicle ever developed. Its protection level was very poor, and it suffered mechanical issues early on. It, therefore, comes as no surprise that, starting in the late 1970s, the U.S. military was actively looking to purchase another such light vehicle to replace the rapidly aging Sheridan. This was especially true for the U.S. Airborne forces (82nd Airborne Division), which was in need of light, mobile, and air-transportable firepower. Throughout the 1980s a number of light tank prototypes appeared as parts of the Armored Gun System program, but none have been as successful as the XM8.

The XM8 was designed by FMC (or, more specifically, its subsidiary United Defense) as part of the abovementioned Armored Gun System program to replace the M551. The main goal of the project was to provide the U.S. Army with a vehicle with sufficient firepower and the ability to withstand artillery shrapnel impacts and infantry-operated anti-tank weapon fire. Arguably the most important feature, however, was the ability to deploy such a vehicle by the means of low-velocity airdrop from a C-130 or a C-17 in order for the vehicle to be attached to the 82nd Airborne.

To make the vehicle suitable for multiple types of operations, the XM8 could be configured with three possible armor options that influence the vehicle’s weight but increase the protection.

Level 1 – offers basic protection against small arms and shell fragments. The hull itself is made of aluminum with a Kevlar liner with certain parts of the hull and turret (side, rear) having a ceramic inlay, forming a composite armor layer resistant to some types of HEAT projectiles. This basic configuration was intended for low-intensity conflicts, and its airdrop weight was 16730 kg, while the combat weight was 18053 kg. In its Level 1 configuration, the XM8 was air-droppable from either the C-130 or the C-17. Alternatively, the C-17 could carry three of these vehicles if airdrop was not required.

Level 2 – this alternative armor kit provides extra protection against artillery and infantry threats. The aluminum-Kevlar frontal armor is reinforced by titanium inlays while the sides and the rear of the vehicle are covered by an additional layer of aluminum spaced armor. Thus equipped, the vehicle hits 44000 lbs. dry weight (19958 kg) and 46300 lbs. combat weight (21001 kg). The important thing to note is that the Level 2 armor kit XM8 cannot be airdropped anymore from the C-130, it can, however, be carried by one and it can be airdropped from the C-17.

Level 3 – this is the highest level of protection the XM8 can achieve and consists of the Level 2 armor with additional passive tiles attached to the vehicle upper frontal plate and upper sides, significantly increasing the protection against infantry-held HEAT-based weapons. Level 3 increases only the protection for the hull. The turret uses the same kit as the Level 2 variant. This version – when transported – weighs 22453 kg, making it too heavy for the C-130 to even carry. It can still, however, be air-dropped from a C-17. The combat weight of this variant is 23590 kg. 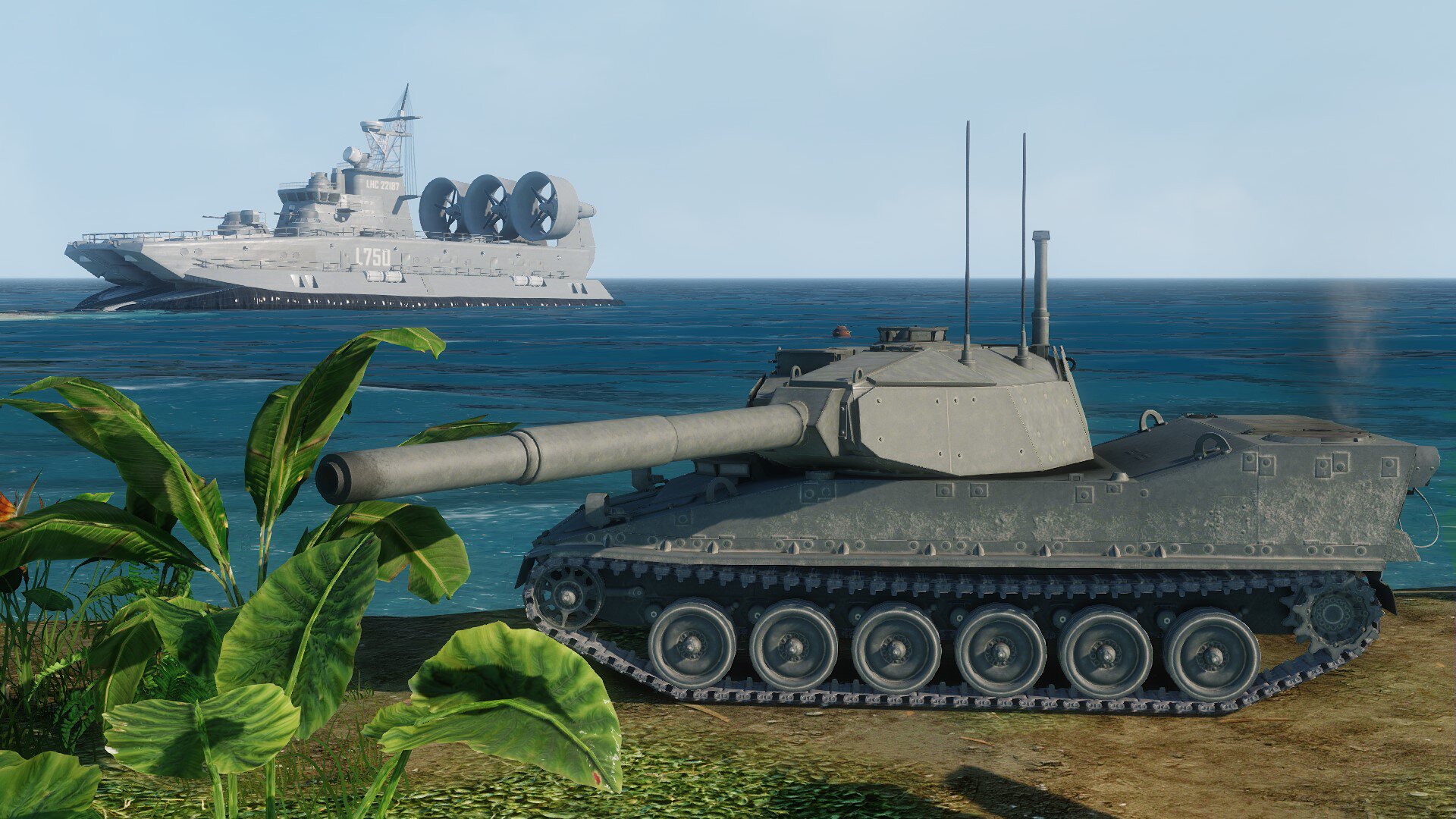 It is worth noting that:

The vehicle was armed with an experimental, automatically loading Watervliet M35 105mm low recoil gun in its FMC-developed turret. The gun could fire 12 rounds per minute and had 21 ready rounds available with 9 more stowed within the vehicle. The gun could elevate to +20 degrees, depress to -10 degrees and was fully stabilized. The gun fires all standard 105mm NATO ammunition.

The FCS was based on a Raytheon system developed for the LAV-105 and included:

The secondary weapon was the 7.62mm M240 machine gun, and the vehicle could also be armed with a commander’s .50cal HMG or a grenade launcher. The crew complement was three men (the commander, gunner, and driver). The gunner was sitting on the right side of the gun (the left side was filled by the FMC-designed autoloader mechanism), the commander sat behind him, and the driver’s place was in the hull itself. The entire crew also had night fighting equipment at its disposal.

The vehicle was generally well-designed, but military budget cuts of the 1990s proved to be its undoing. The vehicle contract was initially assigned to FMC, and six prototypes were built and tested. All of them reportedly still exist in various states of disrepair. In September of 1993, FMC presented the vehicle to the military, and there were plans to produce 297 vehicles from 1997 onwards, but the project was ultimately canceled in 1996. The 3rd Battalion, 73rd Regiment – one of the units to be equipped with M8s – continued to use their Sheridan tanks until it was disbanded in 1997. The other unit – the 2nd Armored Cavalry Regiment – was instead armed with M1128 Stryker fire support vehicles.

FMC tried to find customers abroad but failed to do so – late in 1997, the project was offered for export to the Turkish Land Forces, but nothing came of it. The program was then dormant for more than half a decade until, in October 2003, the company that had built the original XM8 unveiled an upgraded prototype called M8 Thunderbolt Enhanced Capability Demonstrator.

The biggest change was the gun upgrade. Instead of the older M35 105mm gun, the Thunderbolt had a 120mm XM291 soft-recoil smoothbore gun that could fire standard NATO 120mm APFSDS and HEAT ammunition. The gun was automatically loaded from a new automatic loading mechanism developed by BAE that carried 18 rounds and was capable of the sustained rate of fire of 12 rounds per minute.

Instead of the older Detroit Diesel engine, the Thunderbolt was powered by a Hybrid Electric Drive system (a combination of 2 electric engines producing 750hp and a John Deere 6068 HF150 engine producing 300hp), paired with an automatic transmission. This system allowed the Thunderbolt to move for approximately 6km in silent electric mode, making it very stealthy (the tracks were also replaced by new rubber-band ones, further decreasing the noise the vehicle produced).

Interestingly enough, the replacement of the original engine cleared a lot of space inside, allowing the vehicle to carry 4 troops inside on emergency seats. The Thunderbolt was still air-transportable and offered a serious firepower upgrade compared to the American 105mm fire support vehicles such as the Stryker.

In 2006, a second (different) Thunderbolt prototype appeared with a different name (120 Armored Gun System or 120AGS). This was basically a combination of the older M8 AGS hull and the Enhanced Capability Demonstrator turret.

The appearance of the Thunderbolt at that time was, naturally, not random. Ever since the 1996 cancellation, the U.S. Airborne forces were desperate for such a vehicle in order to provide them with the same firepower the vehicles such as the BMD-4M and the Sprut-SD provide to their Russian counterparts.

After the 9/11 attacks, the U.S. Army underwent a certain transformation in order to become more effective at fighting insurgencies and threats related to terrorism. An incredibly ambitious modernization program called Future Combat Systems was launched to equip the U.S. Army with a whole new series of armored vehicles (amongst other things), and it seems that United Defense tried to offer the M8 to the U.S. military as an alternative to the expensive, experimental FCS series. This attempt, however, failed, as did the vehicle part of the entire Future Combat Systems program, leaving the military once again with its old armor and the U.S. Airborne without a suitable replacement for the Sheridan that was phased out in the mid-1990s. The program turned out to be a nightmarish money sink, and the Thunderbolt prototype was, again, shelved only to appear a decade later under new management (United Defense was purchased in 2005 by BAE Systems). 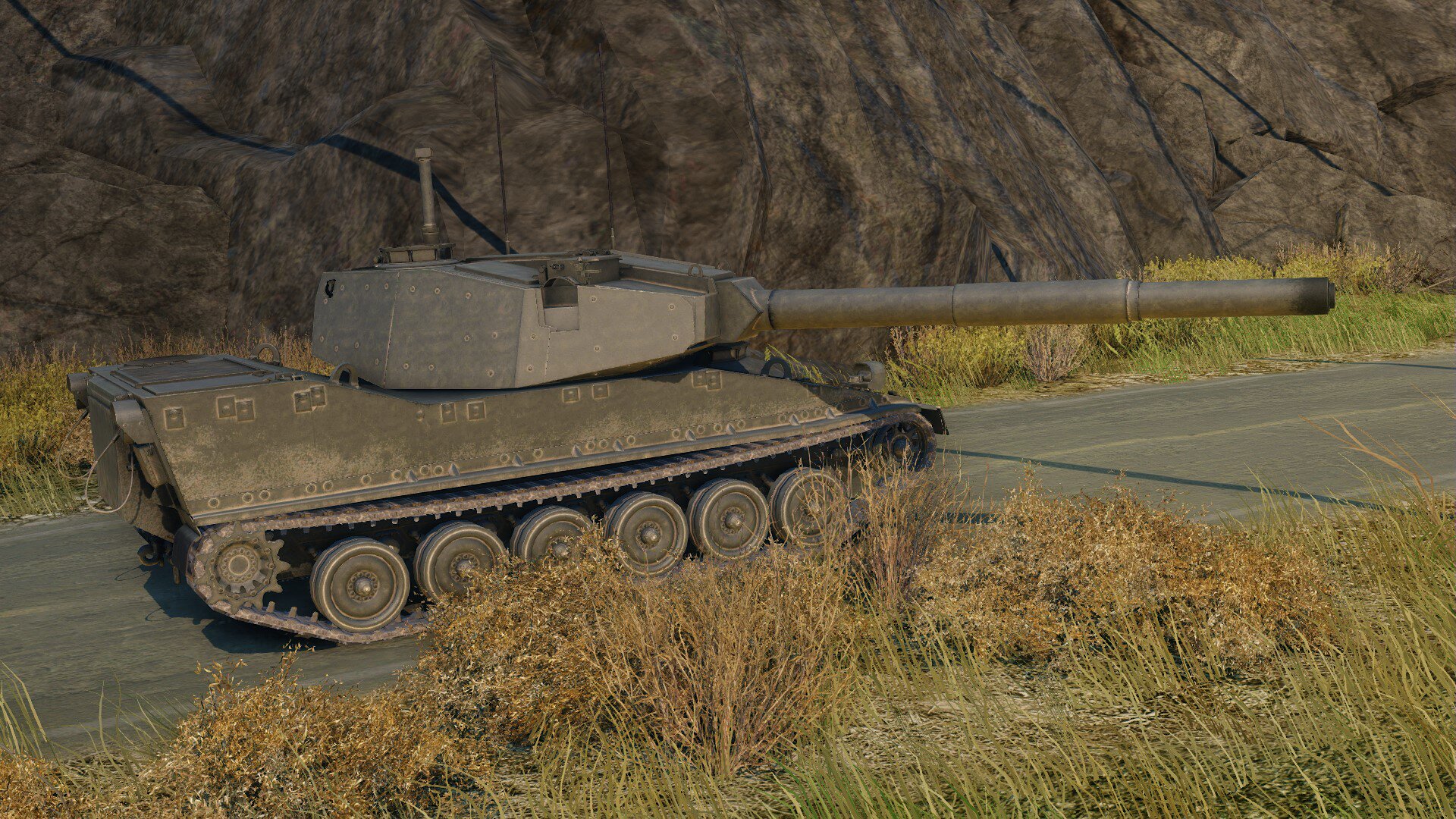 In 2014, the NATO forces found themselves in a new reality. The War on Terror ended, and a new era for the western militaries began with Russia once again coming to the forefront of military interest by its involvement in the War in Donbas. Conventional large-scale war, the light NATO anti-terror expeditionary forces were ill-suited for, found its way back into the spotlight, and rapid response to potential Russian attacks became one of the main topics of military discussions.

In the eyes of the west, the most threatened regions were (and are) the Baltic countries – however, both sides of the potential conflict in the region realize that the NATO response options are seriously limited. Measures, such as the creation of the NATO Response Force unit, were taken to remedy that situation, but it is not enough to simply attach troops to a certain dedicated unit – their equipment must be suitable for their task as well.

For the United States Army, it meant the launch of several new programs (limited in their scope in order to not repeat the mistakes of the Future Combat Systems program) and one of them was called MPF (Mobile Protected Firepower).

The goal of the MPF program was – still is, in fact – to provide the U.S. Airborne forces with a highly mobile Light Tank with ample firepower, capable of being air-dropped from the C-130 Hercules. This Light Tank is to replace the Stryker in the Infantry Brigade Combat Team units. However, in contrast with the previous ambitious programs, the MPF prefers existing technologies instead of expensive development from scratch.

And so the M8 was revived, dusted off and started appearing in public in 2015 as a hot contender for the MPF vehicle with others including a 120mm variant of the CV90 Light Tank (CV90120). In 2016, the Griffin Light Tank demonstrator (based on the Ajax chassis) was also unveiled by General Dynamics Land Systems.

At this time, it is unclear as to which vehicle will be selected (or if any at all), but the ability of the M8 prototype to appear as a serious candidate two decades after its introduction speaks either of its excellent design. BAE has already addressed the potential obsolescence of the vehicle by claiming that the platform could eventually use such high-end technologies as a hybrid drive, latest sensors, and an advanced electronics suite, making it one of the best recon vehicles in the world.

In Armored Warfare, the Tier 9 M8 Thunderbolt is one of the best Light Tanks in the game. Agile and deadly, its role on the battlefield is to flank its opponents and to fire against their vulnerable sides. It is well suited for this role with its mobility and acceleration. Like the other Light Tanks, the M8 Thunderbolt has the ability to mark its enemies in order for them to take increased damage, preventing them from hiding in the process. This active ability makes it an excellent support vehicle. On the downside, it only has very light armor and a soft-kill APS, making it unable to survive concentrate fire for very long. Mobility is the key to success when playing this Light Tank!

What do you think of the M8 Thunderbolt? Let us know in the discussion!