Now that the Battle Path is under way (and so is the ZTZ-20 fix), we can finally talk about our other plans for the rest of the year, starting with a Premium AFV called Lynx Skyranger.

Of course, if you’re into armored vehicles, you’re probably familiar with the German Lynx IFV. If not, here’s what you need to know about it. The Lynx (by Rheinmetall) is one of the most modern infantry fighting vehicles currently offered and yet it’s not exactly special in any way. The idea behind it was to offer a more affordable alternative to various over-engineered modern IFVs such as the Puma. Not necessarily worse, just less complex and with significantly lower lifetime costs.

The first version of this private venture appeared at the Eurosatory 2016 expo in France – this was the lighter KF31 version, as can be divined from the name – KF stands for Kettenfahrzeug (tracked vehicle) and the number represents its weight category (in this case, some 35-38 tons). Two years later, in 2018, another model was unveiled – the significantly heavier KF41 (up to 50 tons) with correspondingly improved protection levels.

The vehicle itself was designed by Rheinmetall engineers to be as modular and easy to maintain as possible while offering unparalleled configurability. Its hull is made of steel. The basic protection level is classified but it is estimated to reach STANAG 4569 Level 3 (protection against 7.62mm armor-piercing bullets) – this armor setup bears the name MCO (Mounted Combat Operation). 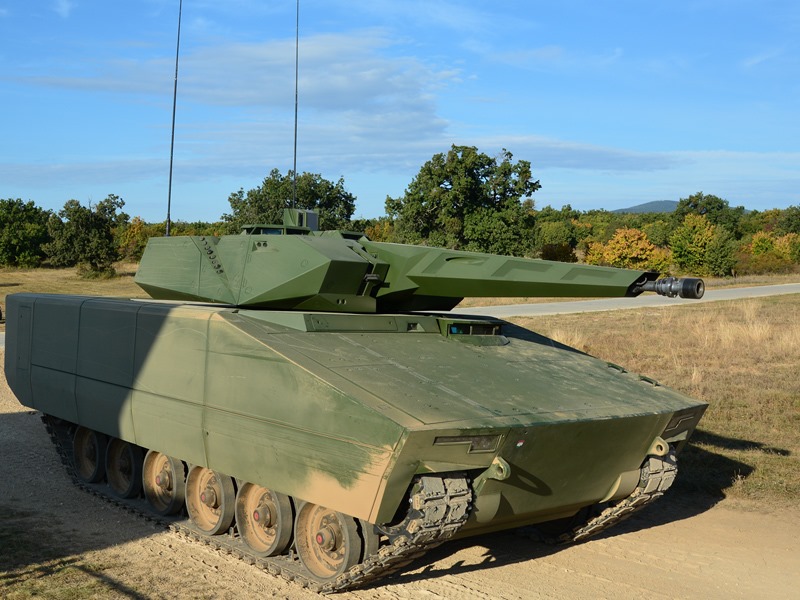 That’s not much, but the hull can be easily upgraded with composite panels, likely increasing the protection to Level 5-6 (protection versus 30mm autocannons). But that’s only the beginning – the vehicle is highly resistant to mine and IED explosions and the armor is specifically designed to withstand ATGM hits. This upgraded armor kit setup is called CUE (Complex Urban Environment) – it’s worth noting that these terms were invented by Rheinmetall, this isn’t an official military term.

And can be enhanced by an active protection system such as the German AMAP-ADS hard-kill APS or a combination of the ROSY smoke discharger and a laser warning receiver that acts like a soft-kill APS.

The Lynx is (in any configuration) powered by an 18 liter 6-cylinder (I6) Liebherr 976 series turbocharged diesel engine producing from 755hp to theoretically 1475hp, depending on the vehicle’s version and tuning (the official numbers are 755hp for KF31 and 1410hp for KF41). It is paired with an automatic transmission (Renk HSWL 256 or Allison X300 series), allowing the Lynx to go as fast as 70 km/h (the maximum off-road speed being roughly 42 km/h).

And, finally, there’s the armament. The older KF31 was fitted with a Rheinmetall Lance turret featuring a 30mm or a 35mm autocannon. For the KF41, the turret was upgraded to Lance 2.0. Both had a crew of two, bringing the total crew to three (gunner, commander and driver) with six (KF31) or eight (KF41) more men carried in the back. But let’s put a mark here for now and return to the armament topic a bit later. 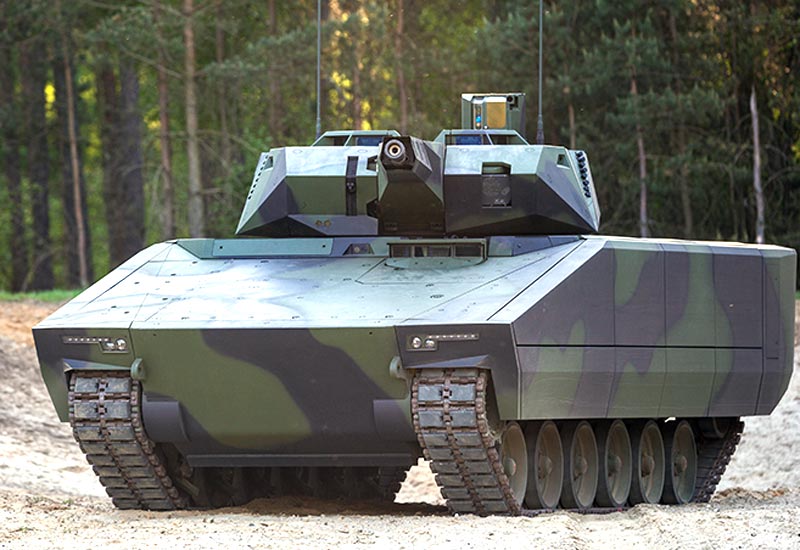 Despite it only being four years since its introduction (six if you count the KF31), it can already be said that the Lynx KF41 is a successful design because despite not being formally adopted by any military prior to its export offer, Rheinmetall managed to garner a lot of interest and, more importantly, secure a major contract. 218 KF41 Lynx IFVs were ordered by Hungary in 2020 to replace its obsolete fleet of BMPs as a part of the Zrinyi 2026 re-armament program.

These will be built directly in Hungary for over 2 billion EUR with the first batch of 46 vehicles being delivered around the end of 2023 (these initial Lynx IFVs will be German-made). The domestic production is scheduled to launch in the early 2023 with 50 vehicles built per year until the contract goal is met.

The Lynx is currently also competing in the Australian LAND 400 program against Hanwha’s AS21 Redback and perhaps in Greece and even the United States of America for its OMFV program (the chances here are, however, quite slim). On the other hand, Rheinmetall lost the Czech Republic and the Slovak Republic bid to BAE’s CV90 Mk.IV.

And that’s it for now for the basic history of the Lynx. But that’s not where its story ends. Let us get back to the Hungarian contract. Apart from the IFV version (KF41), Hungary ordered the development of other versions as well:

And, most importantly – an air-defense variant using the Skyranger turret. And this is where things get interesting. 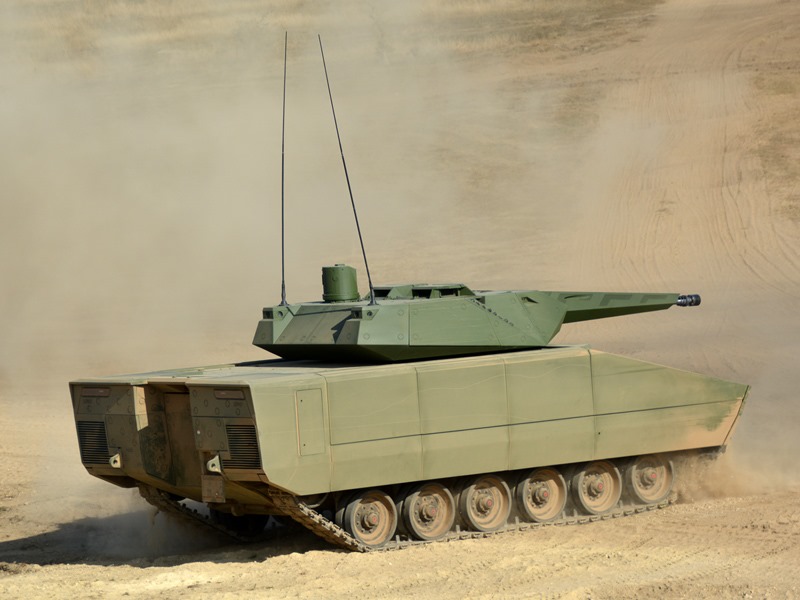 Now, we know you’ve been asking for the Lynx for quite a long time but the cold hard truth is, the basic Lynx is a very bland vehicle gameplay-wise. It’s another Hunter, nothing more, nothing less – a large hull fitted with an autocannon-armed turret. We wanted to introduce the Lynx of course – but we also wanted to make things more interesting, which is why we opted for this Lynx Skyranger variant – a self-propelled anti-aircraft gun. But not just any Skyranger – the Skyranger 30 HEL variant.

In real life, the Rheinmetall Skyranger is a short-range anti-aircraft combat module (turret) that is fully modular and can be installed on any number of platforms, including the Boxer, Pandur or the abovementioned Lynx.

The turret weighs 2 to 2.5 tons and is unmanned – when installed on the Lynx, its two operators sit where the troop compartment would normally be, which is why the Skyranger Lynx variant can’t carry any troops. Its protection levels are fairly basic – STANAG 4569 Level 2 upgradeable to Level 4. An unmanned turret doesn’t really need a lot of armor anyway since the crew is well-protected.

The main weapon of the module is the 30mm Oerlikon KCE Revolver Gun, firing 30x173mm shells with the rate of fire of 1200 rounds per minute from a 250-round magazine. The gun can elevate to +85 degrees and depress to -15 degrees. Thanks to its advanced FCS, it can engage drones as well as low-flying targets, helicopters, lightly armored ground targets and infantry. Several types of ammunition are supported, including APFSDS, HEI-T and programmable explosive ammunition with a proximity fuse (which explodes in mid-air, showering the ground below or everything around it with shrapnel). The last type is especially useful against drones and soft targets – you just don’t want to be around when the metal rain starts pouring down. 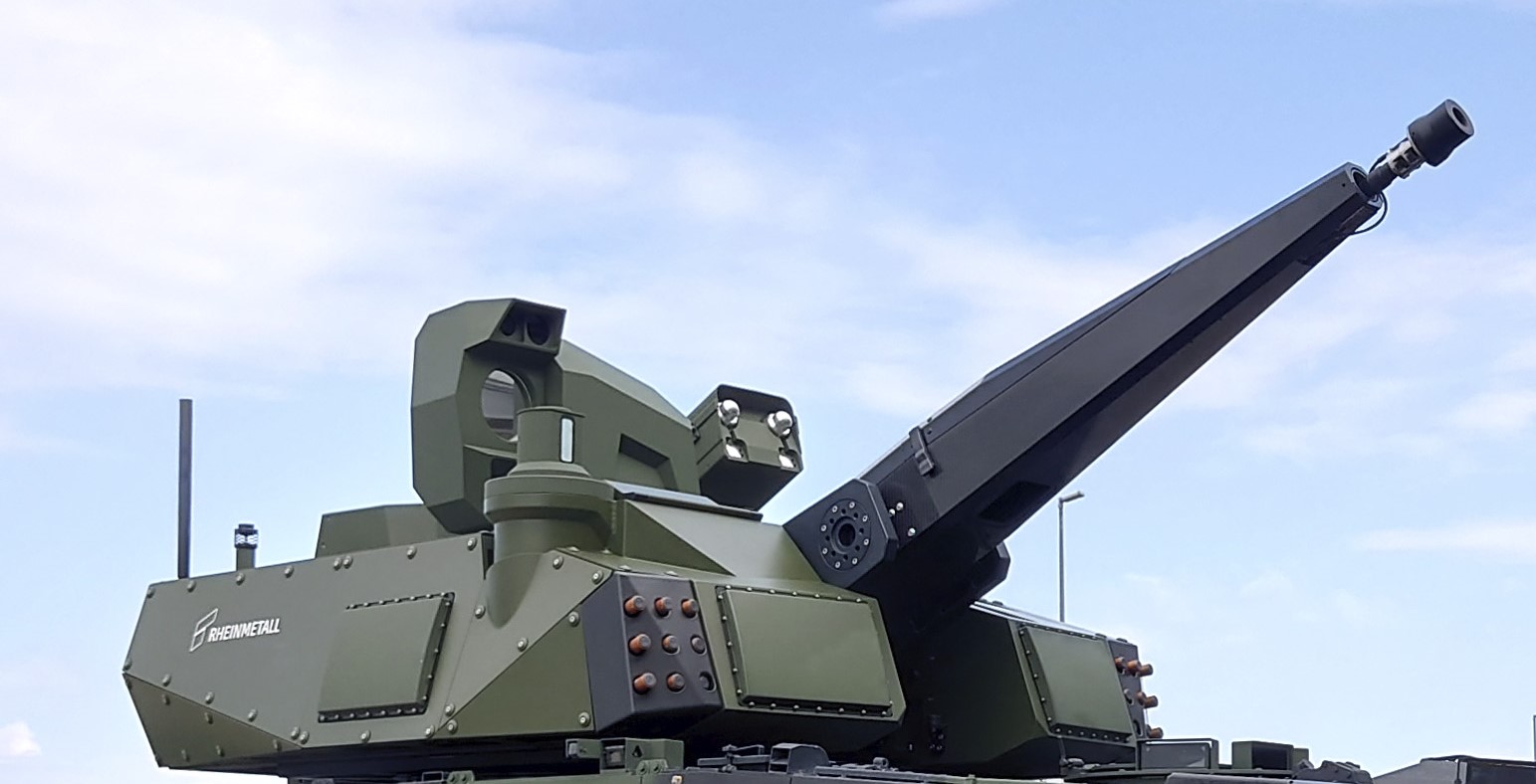 The secondary weapon system is a twin-tube launcher for short-range anti-aircraft missiles such as Stinger, Skyknight, TALON or the BAE APKWS – but any missile can be integrated as long as the customer is willing to pay for the development and certification process.

The tertiary weapon system of the HEL variant is, as its name suggests, a laser (HEL stands for High Energy Laser). This is primarily an anti-drone weapon system. The current version features a 20 kW laser but Rheinmetall stated the future variants would feature 50kW or even 100kW lasers.

All these weapons are guided by an AESA array with 5 antennae scanning the surroundings of the vehicle (their range is 20km). These are complemented by advanced IR sensors (called FIRST) and optical sensors (TREO, featuring a thermal camera and a full HD camera), bound together by a fire control system called Skymaster. If this all sounds too technical – in short, it’s currently about the most advanced SPAAG system in the world. 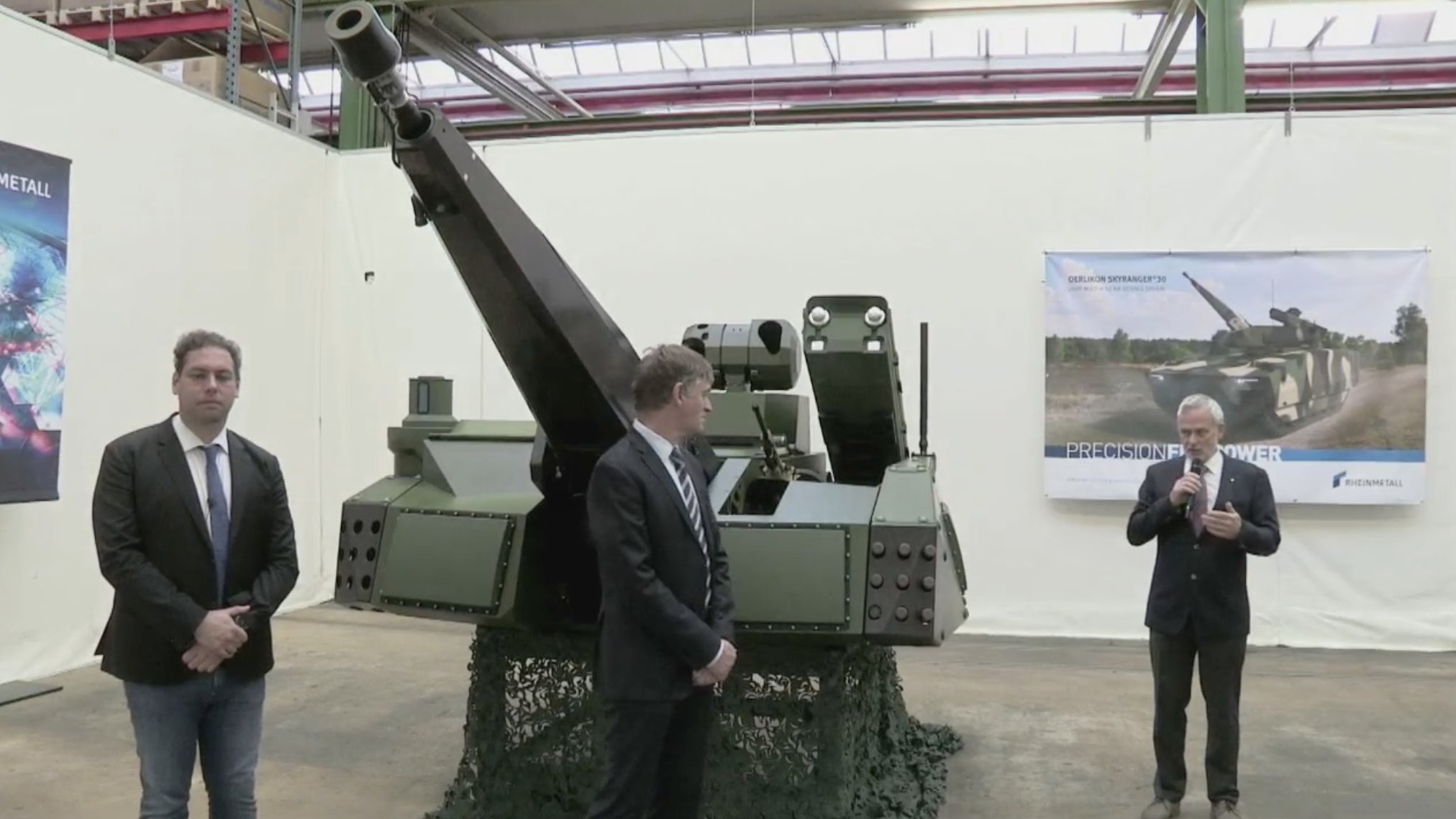 The turret was unveiled very recently (in the February of 2022) and currently remains an early prototype only. The technology should be ready by the end of this year and will be waiting for its first customer. Will it be Hungary? Time will tell but the solution definitely isn’t cheap – the cost of one such module is around 5 million USD.

In Armored Warfare, the Lynx Skyranger will be a Tier 10 Premium Armored Fighting Vehicle.

The basics of this vehicle are pretty straightforward – a solid health pool, adequate armor with NERA elements on the hull and an unmanned turret paired with solid mobility in the form of a 1140hp diesel engine – basically, you have the Hunter with less protection and hitpoints (the Lynx isn’t as big) and without its ATGMs.

What makes the vehicle truly stand apart are its special features and abilities. There are three of them in total.

Programmable Ammunition – the Lynx’s 30mm autocannon is not quite remarkable. We’ll balance its damage and penetration for its higher rate of fire but that’s about it. But it will feature a new ammunition type that is basically HE that explodes over the target. A similar mechanic is already used in the game, although not on an autocannon. In practical sense, it will be useful for removing rooftop ERA and for damaging lighter vehicles hidden behind obstacles and refusing to move, although using it against moving targets will be quite difficult

Starstreak Missiles – as you may have read in the historical section of this article, Skyranger’s missile launcher can be adapted to many missile systems. For our in-game version, we decided to use the British Starstreak as it appeared as an option in one of Rheinmetall’s catalogues. The interesting thing about this missile is that it can be fired at ground targets as well as the air ones and, more importantly, each warhead contains three pieces of sub-munitions in the form of metal darts. These are guided and fly extremely fast (1250 m/s) although their low weight (each weighs less than 1 kg) doesn’t allow them to deal that much damage or penetrate a lot of armor. In Armored Warfare, these will work as long-range ultra-fast but low-damage kinetic missiles (gaining penetration and damage with distance while ignoring APS and ERA), giving you the reach to deal with enemy targets at long distances 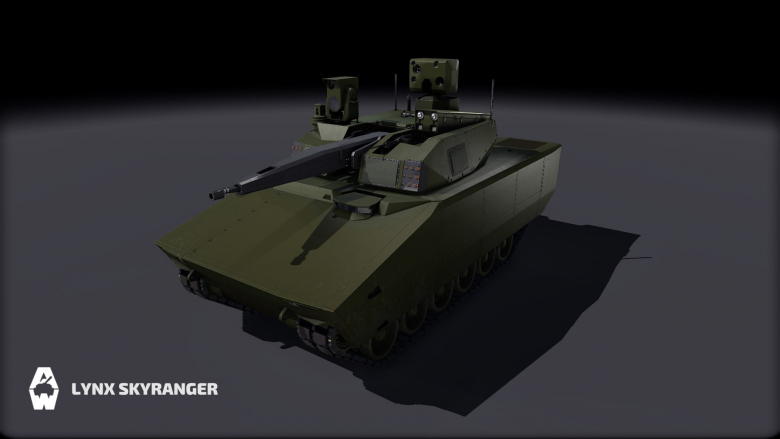 High Energy Laser – there are no drones in Armored Warfare (at least not the small ones this laser is intended against) but, fortunately for us, the laser can be repurposed to something else – blinding enemy sensors. The current version of the mechanic works as an active ability similar to the basic Designate Target one where the target needs to be “locked” for a few seconds, after which a debuff is applied. Only instead of increased damage taken, this ability will seriously reduce the target’s spotting range, effectively blinding it in the process. On the downside, much like with TAM’s Laser Lock ability, a laser beam will appear whenever the ability is in use, leading from your vehicle to the target. This laser is visible to both your team and the enemies – in other words, using this ability puts you at risk as the enemy will see where you are even without you getting spotted as usual

And that’s about it for this vehicle. Let us know what you think of the mechanics and, as always: