The second vehicle prize of the Northern Wind Battle Path will be the CV90 Mk.IV Tier 8 Premium Armored Vehicle and today, we’d like to tell you more about this extraordinary piece of military equipment.

The CV90 platform has an interesting and long history, described in our previous articles (Part 1, Part 2). To sum things up, the original CV90 (the CV9040 variant, or rather Strf 90) entered service in 1991 and was gradually modernized from the A model to the C model over the next decade or so. With the vehicle gaining popularity and foreign customers, several upgraded platform variants emerged over the years:

The Mk.III version is the latest version currently in active service, but a brand-new variant called CV90 Mk.IV The Mk.IV variant was unveiled in 2018 and was developed for export, specifically for the Czech Republic contract to replace the aging BVP-2 IFVs, in which it is competing against the Lynx and ASCOD platforms. Compared to the earlier iterations, the Mk.IV variant features a more powerful 1000hp diesel engine by Scania, a new suspension and boasts two ton higher carrying capacity than its predecessor. Included is a next-generation electronics architecture that allows the vehicle to stream BMS data in real time. 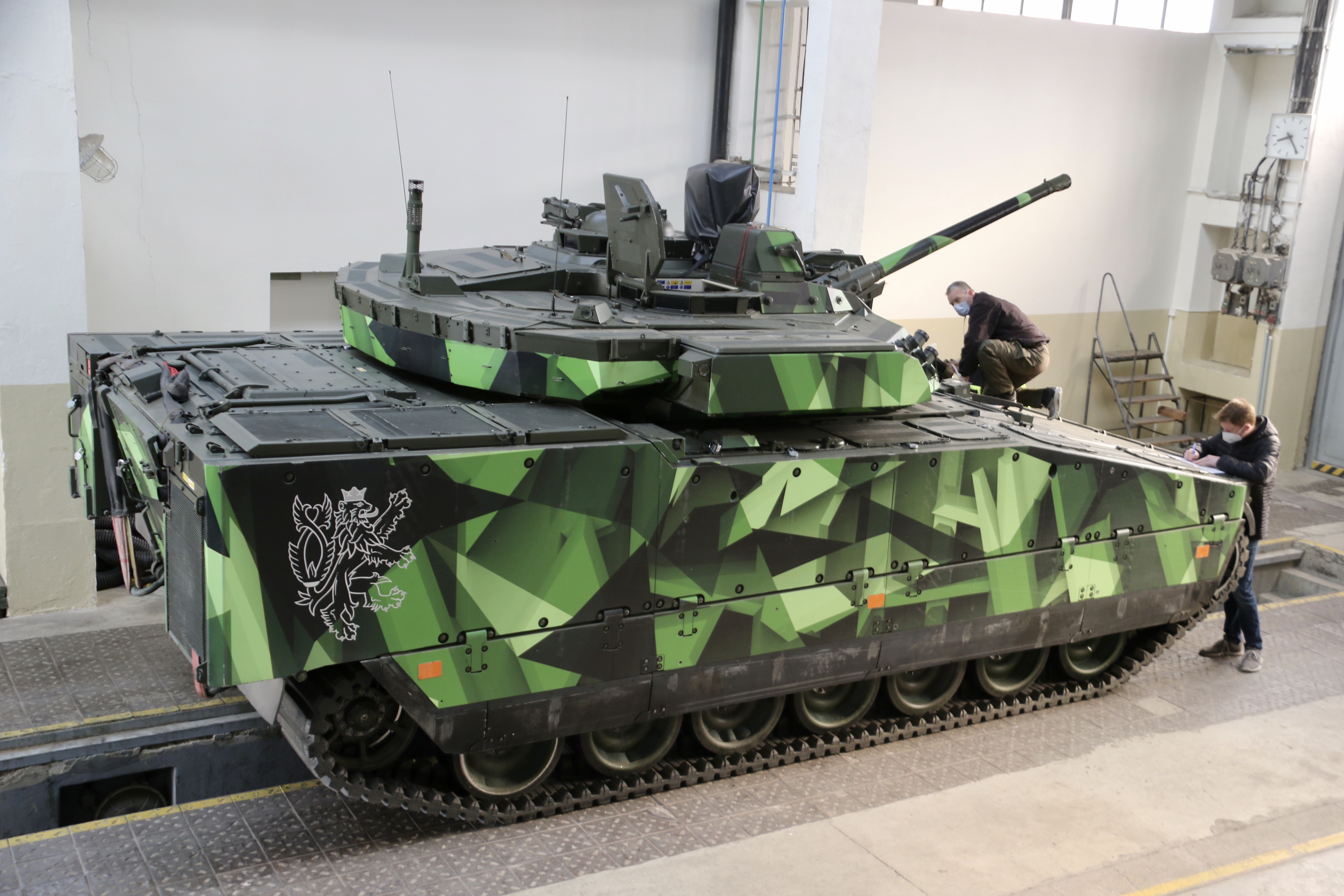 The CV90 Mk.IV can carry multiple turrets with two being offered for the Czech contract – a standard manned turret and an unmanned MCT-30 turret by Konsberg. The Armored Warfare variant combines the manned turret with an advanced 50mm Bushmaster autocannon for maximum firepower. With the Czech contract still undecided and delays expected due to the COVID-19 outbreak, the Mk.IV currently remains a prototype only with 1 or 2 vehicles built and shown across various military expos.

In Armored Warfare, the CV90 Mk.IV will be a Tier 8 Premium Armored Fighting Vehicle. But before we tell you more about it, please note:

The CV90 Mk.IV will be a classic heavy-duty Infantry Fighting Vehicle with decent mobility and survivability, but also excellent firepower. If you are familiar with the Marder 2 IFV, you’ll feel here right at home.

Protection-wise, the CV90 Mk.IV won’t offer all that much except for some basic frontal protection against autocannons. On the other hand, it will have a decent health pool of 2250 hitpoints (with the Kevlar Spall Liner module installed) as well as the option to unlock the Iron Fist hard-kill APS and Experimental Smoke Grenades via additional progression (by completing extra Battle Path missions and challenges). 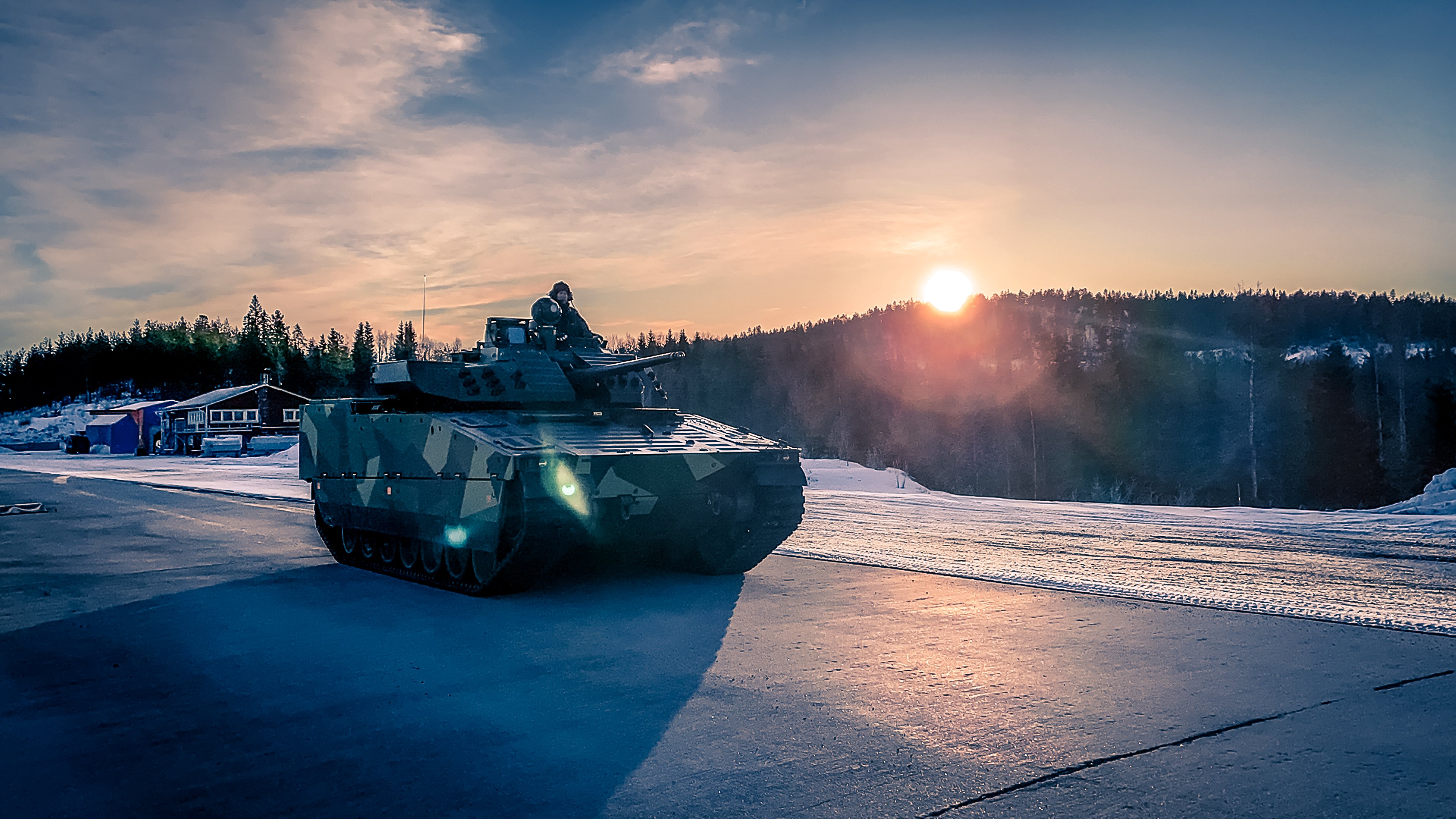 Its mobility will also be fairly decent with the maximum speed being 70 km/h, the reverse maximum speed being 40 km/h. It will take 3.5 seconds to accelerate from 0 to 32 km/h thanks to its powerful engine (1000hp Scania DS16 diesel), although the CV90 Mk.IV won’t be exactly nimble due to its 36 tons of weight. Its mobility will allow it to perform some basic scouting, but it’s not what it will excel in.

The truly strong side of this vehicle will be its firepower. On one hand, we have the 50mm version of a Bushmaster autocannon, capable of sustained fire (that is, no clip reloading is needed, just like on the Marder). The gun will fire AP shots only (that’s right, no PELE) with 240mm of penetration and 65 points of damage per shot. The rate of fire will be some 250 rounds per minute, translating into some 14250 points of damage per minute. That is, of course, only a theoretical number – in reality, plenty of vehicles will be sufficiently armored from the front to withstand. HE shells will also be available.

And that’s where the ATGM launcher comes in. The CV90 Mk.IV manned turret carries a double Spike-LR missile launcher (1100mm of penetration, 2 seconds between launches followed by 20 seconds of reloading time). Additionally, you’ll be able to choose from one of two additional progression modules affecting this launcher, allowing you to:

The point is, you’ll have the choice between the hit-and-run tactics (by releasing both missiles at once and retreating for a longer reload period), or a more sustained damage model where you keep the target in your sights, cycling weapons in a smart way to maximize your damage output over time. 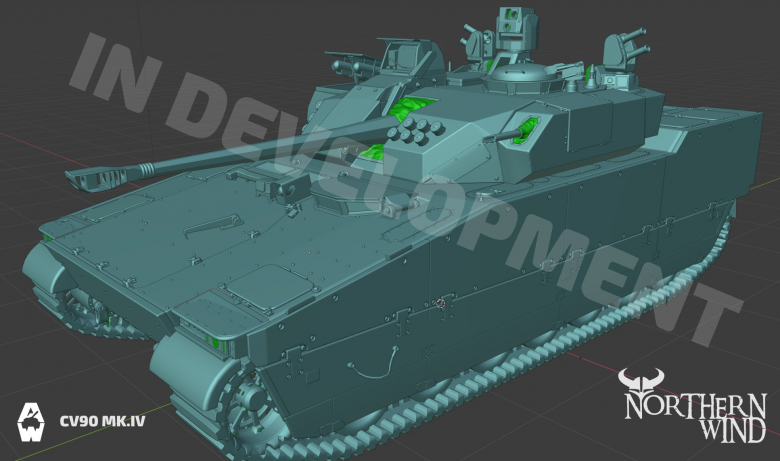 And, last but not least, the camouflage and viewrange values will also be fairly decent (31 percent, 450 meters) and, on top of that, the vehicle will be equipped with the Recon Package module, increasing your viewrange by 30 meters when standing still. The CV90 Mk.IV will naturally also be able to carry Mechanized Infantry.

All things considered, the CV90 Mk.IV will be fairly versatile. The ideal role for it will be second line fire support. Deploy your infantry, hide behind an obstacle, a bush, or even your team mates, and let loose. Combining both weapon systems will yield the best results, unless you are playing PvE against lower Tier vehicles of course. Still, can’t hurt to release a missile or two once in a while. The bottom line is, this vehicle will be fairly new-player-friendly and is designed to be enjoyed by the widest audience possible.