Samuel Thorpe is the newest commander in Armored Warfare and the first addition to the pool in a few years. His history is closely tied to Perihelion. 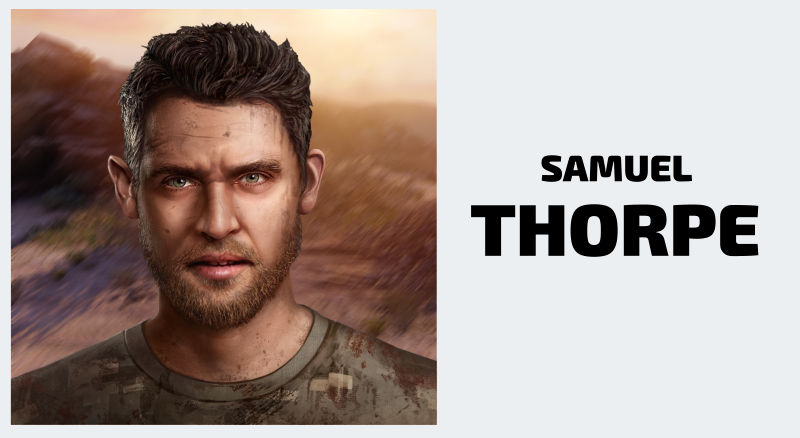 Samuel Thorpe was born during the first years of the Collapse, although it wasn’t known as such back then. His parents perished during a violent civil revolt, murdered by a vicious mob. In an out of foster homes for most of his youth, life offered Samuel few options but to join the U.S. Army. Later, he became a small-time mercenary as many opportunities arose for the men of his profession.

His lucky break came in the summer of 2028 when he was hired by David Murdoch, a legendary investor from Chicago putting together a small but well-armed security force. He was supposed to help train the troops in Arizona but the operation ended with an unexpected outcome. A mysterious enemy attacked and decimated a nearby military base. Woken in the night by the sound of gunfire, Thorpe and his troops rushed to aid the beleaguered U.S. Army troops and managed to fend of the attack. Samuel is still relatively inexperienced and eager to claw his way up the food chain to reach the top.

Gameplay-wise, Samuel Thorpe currently shares the skill field with Maximilian Koenig with his main ability being an Experience income boost, which makes him highly suitable for new players and reflecting the fact that he came to Perihelion to provide training.

But here’s the interesting part for those of you who already familiar with the game – his skills may and will change. Over the course of his stint in the desert, Thorpe became familiar with his assigned vehicle, a customized BMPT by the name of Black Mamba. His skills will therefore reflect this choice in the future, but this may not be the end. Lore-wise, Thorpe may switch vehicles in the future and his skills could reflect that. But who decides that?

You, of course. The way to make such choices will be indicated in future Perihelion missions. Participate in the Perihelion event in an indicated manner to directly decide this commander’s fate. It will be in your hands.

We hope that you will enjoy this challenge and, as always:

Learn more about the new regular PvE mission we are working on!

In Development: Type 99B