Today, we would like to show you one of the three additional progression vehicles that will be introduced after the launch of the Spirithaven season – the K-153C

The K-153C is one of the sub-variants of the modern four-wheel Kia Light Tactical Vehicle (KLTV) family of utility vehicles designed both for export and for the military of the Republic of Korea. The KLTV is a modern multi-purpose light platform that can serve a number of purposes, one of them being a light Tank Destroyer armed with two Raybolt missile launchers. 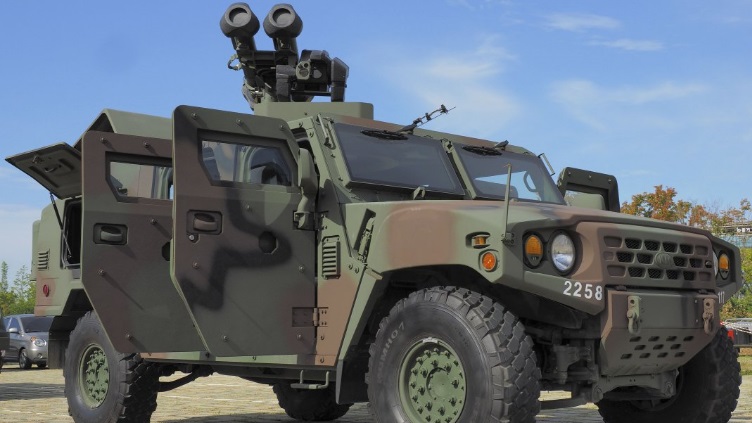 The entire family of vehicles was shown to public for the first time in 2015 in Abu Dhabi and was accepted in South Korean service in 2016. The K-153C variant was first fielded in 2017. Several attempts were made to offer the vehicle family to foreign buyers (most notably Pakistan and Philippines) with Mali purchasing an unknown number of these machines in a light weapons carrier configuration (with a lightly protected, open-topped machinegun “nest” on top) and using them in counter-insurgency operations alongside the UN troops deployed there.

As for the K-153C specifically, the vehicle weighs 5.7 tons, is 4.9m long, 2.195m wide, 1.98m tall (excluding the launcher) and has ground clearance of 40.5cm. In its basic form, it’s only lightly armored (steel) against small arms only (specifically, the Soviet 5.45mm bullets) – anything heavier will go through. The windows are bulletproof.

However, Kia has been offering several optional upgrades to increase its crew protection levels, most notably:

The vehicle is powered by a Kia S2 2.959 liter V6 diesel engine producing 225hp, paired with an 8-speed automatic transmission and its maximum speed is 125 km/h. All four wheels are, of course, powered (can be switched to just two wheel drive). The suspension is of double wishbone design with strut springs and shock absorbers. The vehicle can ford water of up to 0.76 meter depth and has relatively good fuel economy too – its cruising range is 480km for 76 liters of fuel carried. The engine can operate in temperatures between -32 and +45 degrees Celsius.

The main weapon system of the K-153C is a manually operated twin Raybolt ATGM launcher. By manually operated, we mean that a crew member of the vehicle has to climb through the hatch on top of the vehicle, take hold of the launcher, aim it and pull the trigger, leaving his upper torso exposed for the duration of the process. From that fact stems the intended tactic for the vehicle – to stay away from close combat and to target enemy armored vehicles from a safe distance.

This is enabled by the maximum Raybolt range of 2.5 to 3 km. As for the Raybolt ATGMs, they are 120mm top-attack missiles with tandem HEAT warheads and the Fire and Forget capability. Each missile weighs approximately 5.8kg. Their flight velocity is 580 m/s (Mach 1.7) and they can penetrate roughly 900mm of armor after defeating ERA. The vehicle carries two of these missiles in the launchers and four in the back.

In Armored Warfare, the K-153C will be a Tier 9 progression Armored Fighting Vehicle that will be unlockable from the Harimau Tier 8 Light Tank and will be one of the two vehicles on Tier 9, the other being the AS21 Redback. Gameplay-wise, it will be somewhat similar to the CRAB Tier 9 AFV, but with more emphasis on guided missiles.

As its description above suggests, the vehicle will be very light and its protection levels will correspond to that fact – at mere 5.7 tons, its armor will be able to withstand only small arms fire. The vehicle will be vulnerable to every weapon in the game, including the 7.62mm machineguns. This vehicle will not have any other protection systems (such as an APS) available either.

Its mobility, however, will be, as expected, amongst the highest in the game. With its 225hp diesel, the vehicle will be about as mobile as Kornet-EM – and that’s a lot; its maximum speed will be whopping 123 km/h. Thanks to its supreme agility and small size (with the corresponding excellent camouflage factor), the K-153C will truly be a hard target to hit.

But most upgrades will be available in the firepower section. The K-153C will be armed with a twin Raybolt ATGM launcher like it is in real life – with one change. In real life, the launcher is installed next to a crew hatch and is manually controlled by the operator, who has to lean out of the hatch, aim the launcher and fire it while being exposed to the enemy. This is usually not a huge problem on an actual battlefield, as such a vehicle is not expected to find itself anywhere near the enemy. 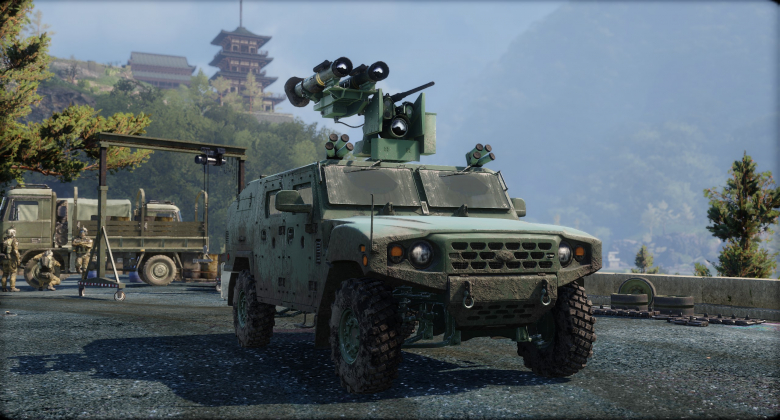 However, in Armored Warfare, this is not the case and in order to make sure the vehicle behaves gameplay-wise as intended (for example by not having gunner who is constantly dead whenever anyone just glances at the launcher), we’ve decided for a more conventional approach and replaced the original Raybolt launcher with a modified Kongsberg CROWS-J turret with two Raybolt launchers instead of a single Javelin one.

Of course, you are probably already familiar with the Raybolt from the earlier introduced K21. In the game, the ATGMs behave the same way as the American Javelin does – you need to lock your target by holding your right mouse button while aiming at it and, after that, the missiles fly high into the air and descend upon it from above while aiming automatically (no further guidance is required after the launch).

This, of course, means that they will hit the weakest part of the target’s armor (the roof), which is why they do not need a lot of penetration – a standard 670mm penetration HEAT warhead doing 430 points of damage is more than sufficient. The K-153C can fire two of these in rapid succession (less than 2 seconds) followed by a longer (15 second) reload time of the entire “magazine” (the missiles will fly simultaneously). The vehicle also carries more than enough missiles to deal a lot of damage in one battle. 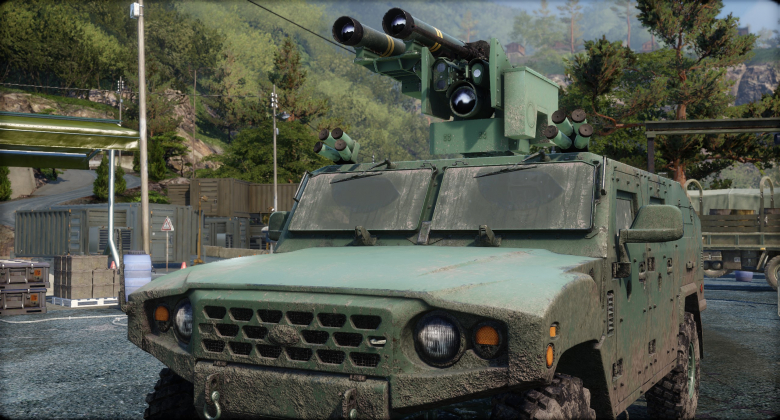 As a secondary weapon, the Kongsberg turret will be armed with a 12.7mm machinegun with sufficient depression and elevation (-20/+60 degrees) so that the vehicle is not defenseless against enemy infantry.

But that’s not all. There will be the following upgrades available:

As for Active Abilities, the vehicle will be able to use the Stealth one, increasing its camouflage temporarily by 30 percent but decreasing its mobility by 70 percent for a certain period of time. It’s worth noting, however, that the effect is broken if the vehicle fires a shot and that the skill cannot be activated if the vehicle is actively spotted (indicated by the yellow eye icon), burning or moving faster than 30 km/h. 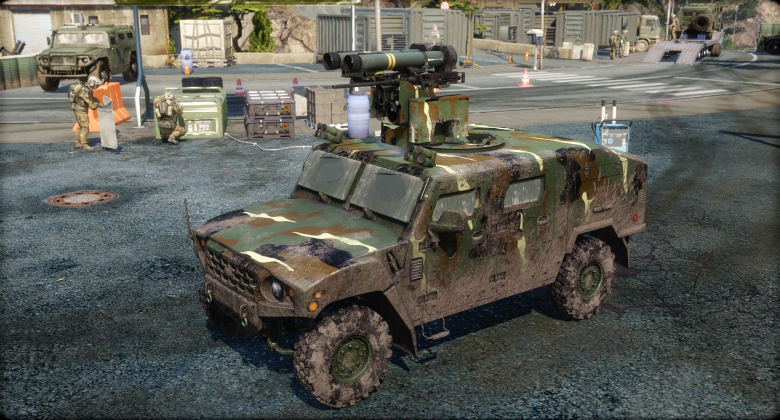 All in all, what we have here is a fast, potent but also fragile scout and tank killer. Thanks to its mobility and camouflage factor, it will not only be able to drive forward and recon the area for its team, but will also be able to take out some targets on its own. The damage per minute value will not very high, but the twin missile launcher will be fairly capable of finishing off various stragglers or ambush the enemy with a sudden missile from above, stalling an attack in the process.

Learn more about the improvements to the APS mechanics we are planning for Update 0.31