Much like the U.S. Army, in the second half of the Cold War the armed forces of Great Britain sought to switch from a classic battle taxi doctrine APC to something with a little more firepower. 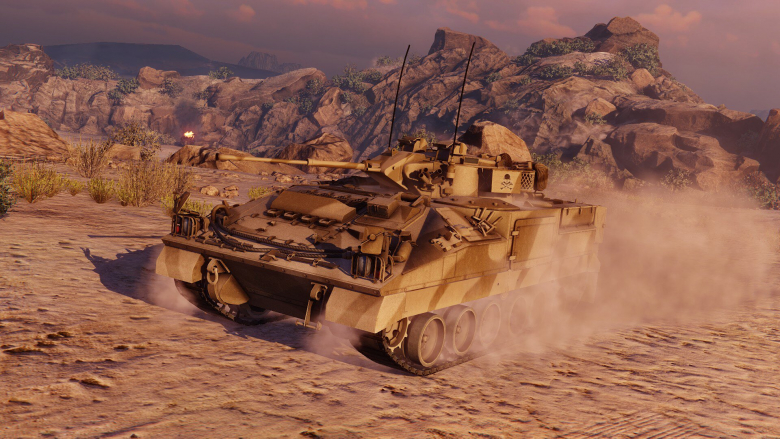 Not that the previous APC vehicles were unsuccessful. From the earliest Universal Carriers and Kangaroo tank conversions to wheeled APCs and the ubiquitous FV430 series, the British school of armored vehicle design proved its mettle time and time again during the Second World War and the decades that followed. Times, however, moved on – the Soviets adopted their successful BMP design and its relative success in the Middle East wars made sure that NATO was paying close attention to the concept.

In the late 1960s, the FV432 was the principal APC of the British Army. It was mostly comparable to the M113 with no armor or armament to speak of. An improvement was needed and the first attempts to design a vehicle that could replace it took place between 1969 and 1971 by what is currently part of the Defense Research Agency (earlier Fighting Vehicles Research and Development Establishment) in Chertsey under the designation of PD1 (Project Definition 1).

The Chobham armor requirement was abandoned very early on due to cost and weight issues, but an automotive test rig was built and the rest of the requirements were sent to British industrial companies asking them to submit their proposals. Two companies – Vickers and GKN – took part in the development that followed from 1972 to 1976, submitting their proposals and ideas for the upcoming British AFV (now referred to as Mechanised Combat Vehicle 80 – or MCV-80).

In the end, GKN Sankey was selected as the primary contractor – for the first time in British armored warfare history, all development and production rested on the shoulders of the contractor without significant Ministry of Defense involvement. This allowed GKN more contractual freedoms, such as the ability to choose sub-contractors for various components of the vehicle (resulting in a number of tenders). 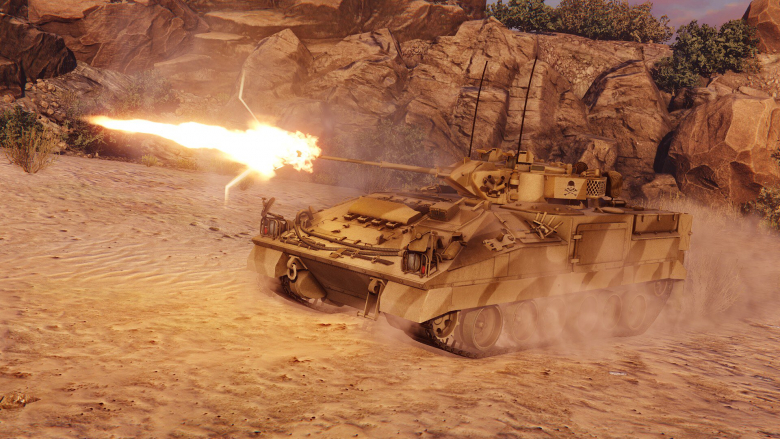 It also made them fully responsible for any delays and stiff contractual penalties were put in place in case of such a contingency.

The detailed MCV-80 design study phase took place between 1977 and 1979, roughly in parallel with the American XM2 that would later become the Bradley. The British had access to some of the XM2 design documents, which they studied thoroughly. Full MCV-80 development began in 1979, a decade after the initial proposal to replace the FV432.

Between 1979 and 1980, three prototypes (one for suspension testing and two full vehicles) were built by GKN and in 1979 the vehicle program was renamed to Warrior. In June 1980, the British Army officially selected the MCV-80 since it met its official requirements:

The military also required a large number of prototypes to be built (no fewer than 12) and expected each of them to be very reliable – in the end all of the prototypes combined drove for more than 200,000 kilometers. Part of the testing process took place in Germany in the fall of 1984 during an operation called Exercise Lionheart, where the prototypes demonstrated their ability to keep up with the Challengers.

As a result of these successful tests, the MCV-80 was officially accepted into British service in November 1984 and in 1985 it received its official combat name: FV510 Warrior.

In 1985, the British Ministry of Defense ordered 1053 Warrior AFVs in three batches. All three were awarded to GKN Sankey as a result of its extensive investment into Warrior development, much to the dismay of the other contenders for the contract (Alvis, Royal Ordnance and Vickers). It's worth noting that of the 1053 ordered, only 602 were to be of the standard 30mm Rarden variant while the rest were specialized variants. 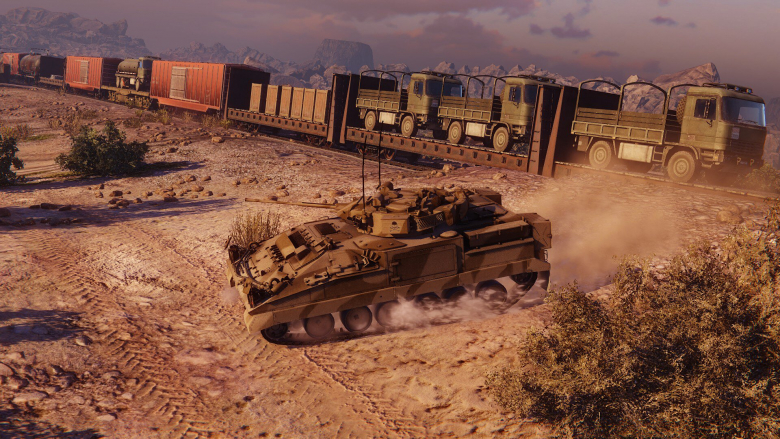 GKN built a new factory in Telford (Shropshire) to fulfill the contract and the first vehicles rolled out from the assembly lines in December 1986. The first batch consisted of 290 vehicles (170 of the standard 30mm RARDEN variant) and the first mass-production Warrior was officially transferred to the military (specifically to the 1st Battalion Grenadier Guards) in May 1987.

At the time of its introduction, the Warrior was a modern IFV, comparable to the Bradley. In its original configuration, it weighed 25.7 tons and had a crew of three men.

Its hull was made of welded aluminum and the turret of armor grade steel, giving the vehicle enough protection against Soviet 14.5mm bullets from all angles, 155mm air-burst shell fragments and 9kg anti-tank mines. It's not much given the threats of the modern battlefield but it was comparable to other vehicles of its class at the time of its introduction – that does not mean that efforts were not made to improve it. In 1990, the Warrior, deployed in Saudi Arabia, received additional applique armor in the form of massive modules bolted to the side and front of the vehicle.

The vehicle was powered by a Perkins Condor CV8 550hp diesel engine with Allison X-300-4B transmission, giving it a maximum speed of 75 km/h on the road (50 km/h off road) and a power-to-weight ratio of 21.4 hp/t. The Warrior is able to accelerate from 0 to 48 km/h in approximately 13 seconds.

Firepower consisted of a 30mm L21A1 Rarden autocannon, installed in a two-man steel turret, which is offset slightly to the left from the vehicle axis. The same gun is used by other British light armored vehicles – the Scimitar and the Fox – and can destroy soft and lightly armored targets thanks to its selection of ammunition:

The APDS round was capable of penetrating 40mm of steel at 1500m at a 45 degree angle – sufficient penetration to deal with lighter armor such as the Soviet BMP series but not enough to knock out a tank. Thanks to its superior armor-piercing performance, it has replaced the APSE-T round in the anti-armor role. The gun's rate of fire is approximately 80 rounds per minute using 3-round clips. The weapon's maximum range was 4000 meters in theory but the most effective range was between 800 and 1500 meters. Unlike the Bradley gun, the 30mm cannon of the BMP-2, the Warrior Rarden gun was not stabilized, forcing the vehicle to stop before laying down any accurate fire. The gun could elevate to +45 degrees and depress to -10 degrees.

In addition to the cannon, some Warriors intended for Operation Desert Storm were fitted with a MILAN ATGM launcher, a European missile system license-built by British Aerospace Dynamics. The exact number of these MILAN Warriors is unknown.

The turret itself is not very remarkable. The commander sits on the right and the gunner on the left. Both have access to the Pilkington PE Raven optics (combined day/night sights with image intensifier) – their usual target detection range is around 5km with an identification range at 3km thanks their variable zoom system.

Warrior production ran until 1994-1995 with 789 vehicles of all sub-types built for the British military. The original planned amount of over 1000 vehicles was reduced after Operation Desert Storm as part of British military re-organization. 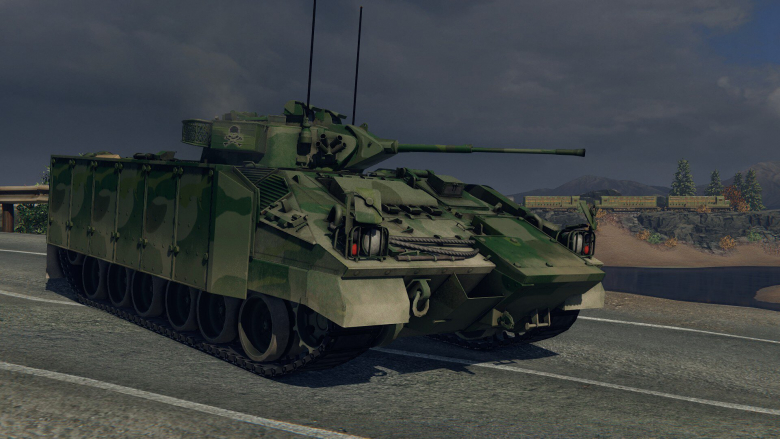 The first Warriors didn't actually stay in Britain – they went to the British Army On The Rhine in West Germany, the first of them arriving to Oxford Barracks in Münster in January 1988 (1st Battalion of the Grenadier Guards) followed by the 1st Battalion of The Staffordshire Regiment and the 1st Battalion of The Royal Scots. Battalions, newly equipped with Warriors, were re-designated from Mechanized Infantry (Tracked) to Armoured Infantry. Each Armoured Infantry battalion was supposed to be armed with 52 Warriors but, in reality, it was often less than that, forcing the aging FV430 series to stay in service for a while longer.

The Warrior's time to shine came in 1991 during Operation Desert Storm. The British sent a large armored contingent to Iraq that included many Warriors. Their numbers were bolstered by the vehicles taken from other units. Between February 24 (operation launch) and February 28 (cease-fire), the British forces didn't lose a single Warrior to enemy fire, overrunning and completely routing Iraqi forces wherever they encountered them. Tragically, two Warriors were lost in a friendly fire incident involving U.S. A-10 Thunderbolt II aircraft (resulting in the death of 9 British soldiers) and one Warrior was accidentally hit by a British 120mm HESH round (but the applique plates prevented major damage).

After Desert Storm, the Warriors returned to Britain to be occasionally used in the following conflicts with British involvement:

Several were lost, mostly to IEDs, although the vehicle has proven to be quite resistant to older hand-held anti-tank weapons such as the RPG-7.

The Warrior was not very successful when it came to exports. The vehicle was trialed in several countries including France and a number of north-African and Arab countries but the only customer they managed to find was Kuwait, which purchased approximately 250 Desert Warrior vehicles from late 1992. It's worth noting that the Desert Warrior won the tender over the Bradley. 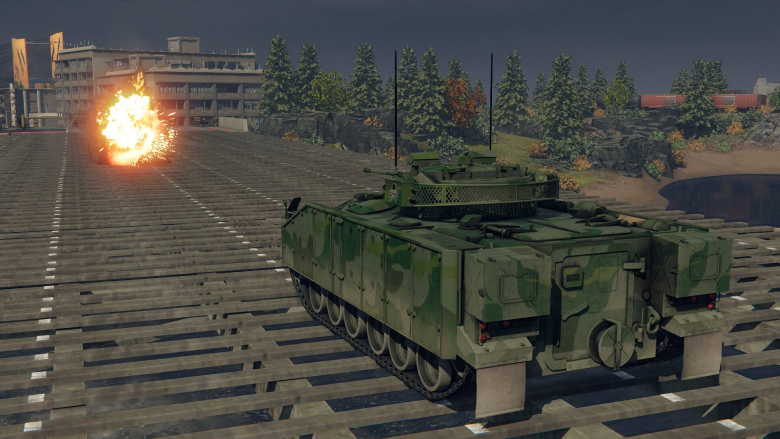 The Desert Warrior was an export variant of the Warrior and featured no fewer than 27 improvements over the original, including a Delco turret originally developed for LAV-25 and armed with a 25mm Chain Gun with TOW missiles. A large number of optional equipment is also available, but the true extent of the Desert Warrior changes will be listed in an upcoming article.

Another export variant is the Arctic Warrior – as its name suggests it is related to the Desert Warrior but is tuned to work well in cold climates. It does not, however, carry the TOW missile launcher.

The Warriors continue to serve to this day with their expected service life recently prolonged to 2040 along with a proposal to modernize them as part of the Warrior Capability Sustainment Program. This military upgrade program calls for 380 Warriors to be improved with additional modular protection. Additionally, 245 of these 380 Warriors are to be fitted with a new turret with updated armament.

In Update 0.19, the existing Tier 8 Warrior will receive an upgrade and become Warrior MILAN. It will also be moved to Sophie Wölfli's vehicle roster from the Marat Shishkin AFV branch. It will also move down a Tier to Tier 7.

The Reputation, Credit and Gold difference will be compensated for as a part of our Compensation plan.

Learn about the SPHINX Tier 10 French AFV, added in Update 0.15