The T-64A Medium Tank is a modernization of the older T-64 that we discussed in our previous article. The biggest change is the replacement of the older 115mm 2A21 smoothbore gun with the first 125mm 2A26 model to be used on a tank, creating the first of the Soviet tanks with the famous combination of a 125mm gun and a pan-shaped turret. 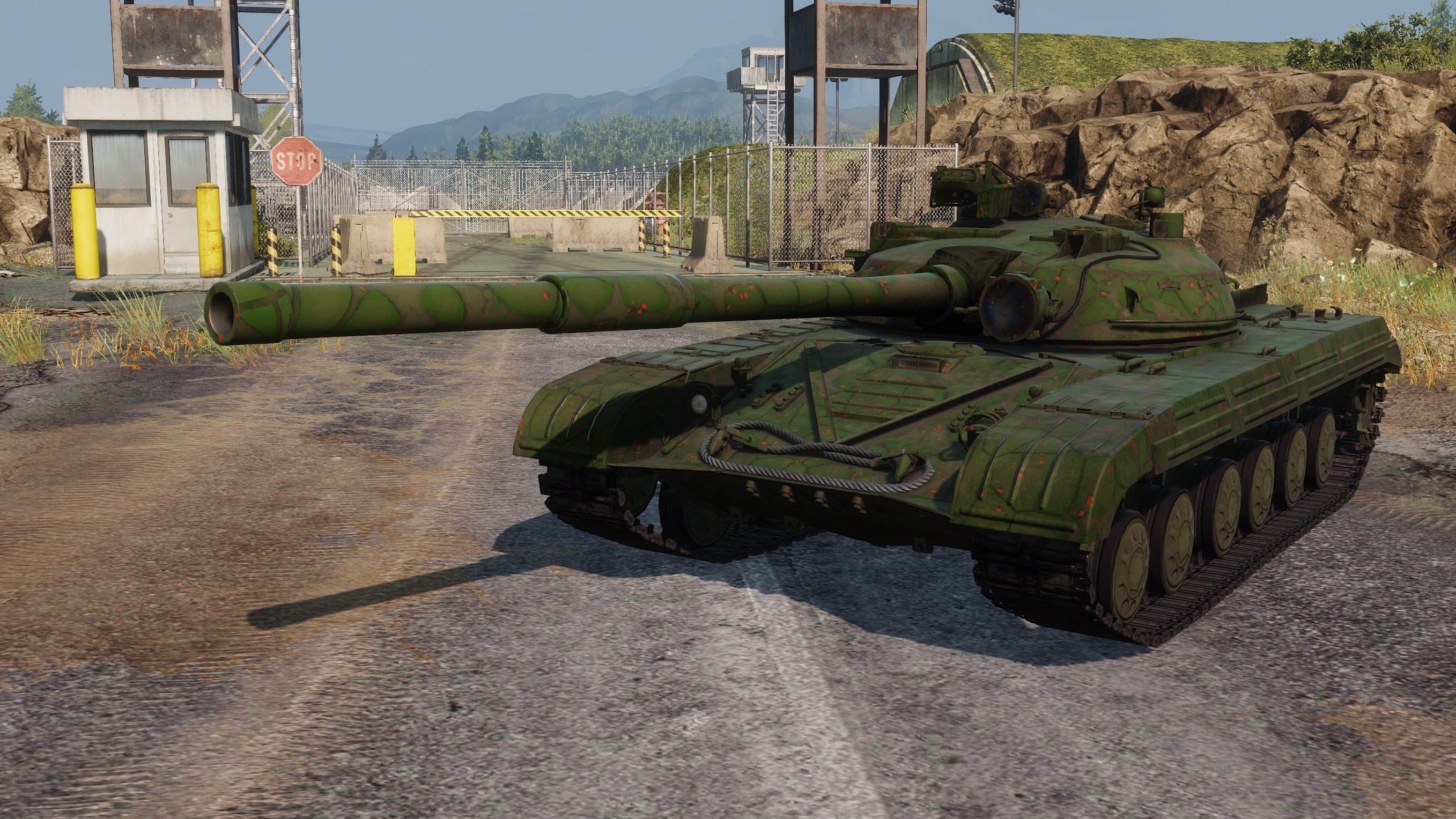 A little additional background first. In the T-64 article, you might have noticed one interesting thing – how incredibly fast did the T-64 go from the development start (1961) over the first trials (early 1963) to its actual mass production (late 1963). If you compare that to the long development and trial cycle of the IT-1 and add to it the fact that this tank used cutting edge technology for its time, you will inevitably come to the conclusion that what the developers under A.A. Morozov had achieved was not only extremely remarkable, but also potentially spelled trouble.

And it did. On one hand, the T-64 was at the time of its introduction the most advanced tank in the world. However, it was also unreliable, difficult to maintain and very, very expensive, which was not a good thing for the Soviet Union that was chronically short of funding. Morozov’s vision for the vehicle was to build simply the best tank, period – and his team did but in the process, they left very little space for additional improvement.

This trait was often criticized (for example by L.N.Kartsev, the designer of the T-62 tank) but its introduction into service was considered necessary to counter the western 105mm rifled gun-armed tanks (the T-62 was considered mostly an interim design, which is one of the main reasons no Warsaw Pact countries opted to license-produce it). Another reason for the expedient launch of the T-64 was likely the meddling of Nikita Khrushchev, who loved to “submit his feedback” on many things, from agriculture to armor development, much to the dismay of actual experts, but that is a story for another time.

Regarding the fear of the 105mm L7, the Soviets were likely overestimating early on the capabilities of the NATO tanks (especially the Patton series) in the early 1960s but the impulse to continue the development of the tank was there. It was believed that a 115mm smoothbore would not be enough to penetrate the frontal armor of the Patton and the Chieftain tanks. As a response to this threat, the OKB-9 design bureau came up with the first version of the Soviet 125mm smoothbore, the D-81.

The full-scale development of the D-81 gun was launched on the 11th of August, 1962 alongside a sister project, the D-83, which was supposed to be a gun of identical properties, only with a rifled barrel. The Soviet military back then still did not fully trust the smoothbore guns and a rifled option was required in case the smoothbore one failed. This fear turned out to be unsubstantiated – the trials showed that the D-81 smoothbore was an excellent weapon and was officially accepted in service in 1968 under the designation of 2A26. 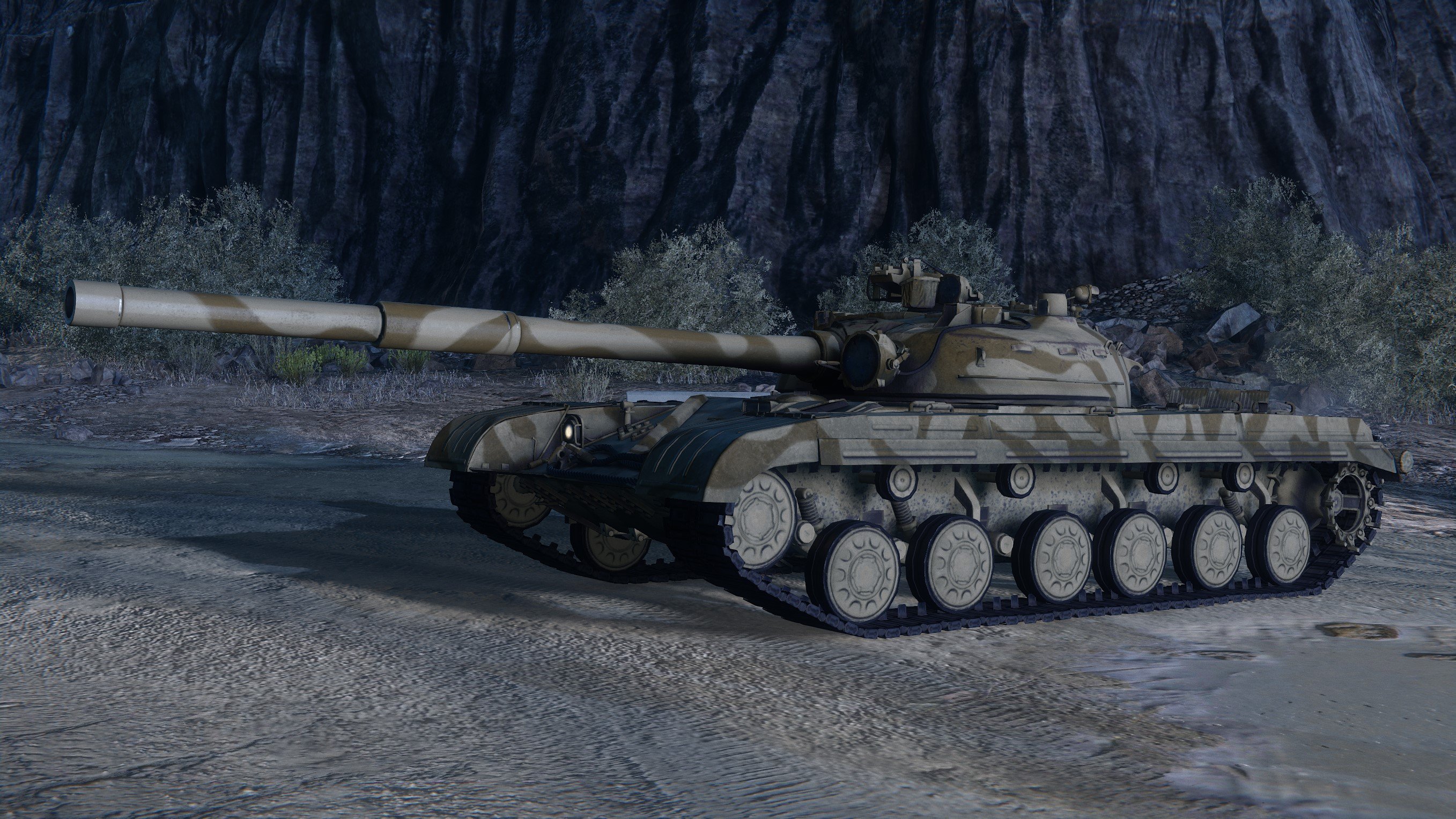 As for the platform that would carry the gun, the development of an improved Object 432 was officially launched as early as in 1962 in Kharkov, once again under A.A.Morozov. The first prototype (with the 125mm gun installed) was ready in the July of 1965 and was tested until the December of 1965. In the September of 1965, a second prototype was built in order to undergo factory trials that lasted until the summer of 1966.

These prototypes (called Object 434) were not very different from the original T-64. The armor, the hull, the suspension and the engine were the same but the turret carried an automatically loaded 125mm 2A26 L/51 smoothbore gun. The gun was fully stabilized (2E18 Siren-III stabilizer), could depress to -6 degrees and elevate to +14 degrees. The gun was aimed by the TPD-2-49 gun sights (combined with a rangefinder) at day and the TPN-1-432 gun sights at night. The night vision was supported by the L-2AG IR searchlight installed to the left of the gun. The gun could fire 8 rounds per minute and had 28 rounds in the carousel (out of 37 carried in total).

The following shells were available for the gun:

In 1967, a limited production run was approved and the vehicle and, finally, it entered production in 1968 under the name of T-64A.

The production version was much like the Object 434 prototype – the changes included a new set of optics (combined with a rangefinder) called TPD-2-1 and a new night sights optics set (TPN-1-43A). The gun also had a new stabilizer (2E23 Siren-IV). The turbocharged 5TDF 700hp engine was improved to increase its reliability compared to the original T-64.

Until the appearance of the next major variant (the T-64B) in 1976, the tank was gradually upgraded throughout its production run.

Starting from 1971, the day sights set was replaced with a new one (TPD-2-49). The night sight set was upgraded too to TPN-1-49-23. The radio was modernized to the R-123M model. Additionally, the typical deep fording kit pipes and other equipment were added to the sides and the rear of the turret. The vehicle also received a new cooling system and a new engine grille. Finally, the tank received four extendable side shields on each side, protecting its flanks against HEAT shells.

In 1972, it received a new NSVT AAMG mounted on the commander’s cupola. The machinegun could be fired from inside the vehicle and was aimed using new PZU-5 periscopic sights set. The suspension also received two additional roadwheel shock-absorbers per side for a smoother ride. 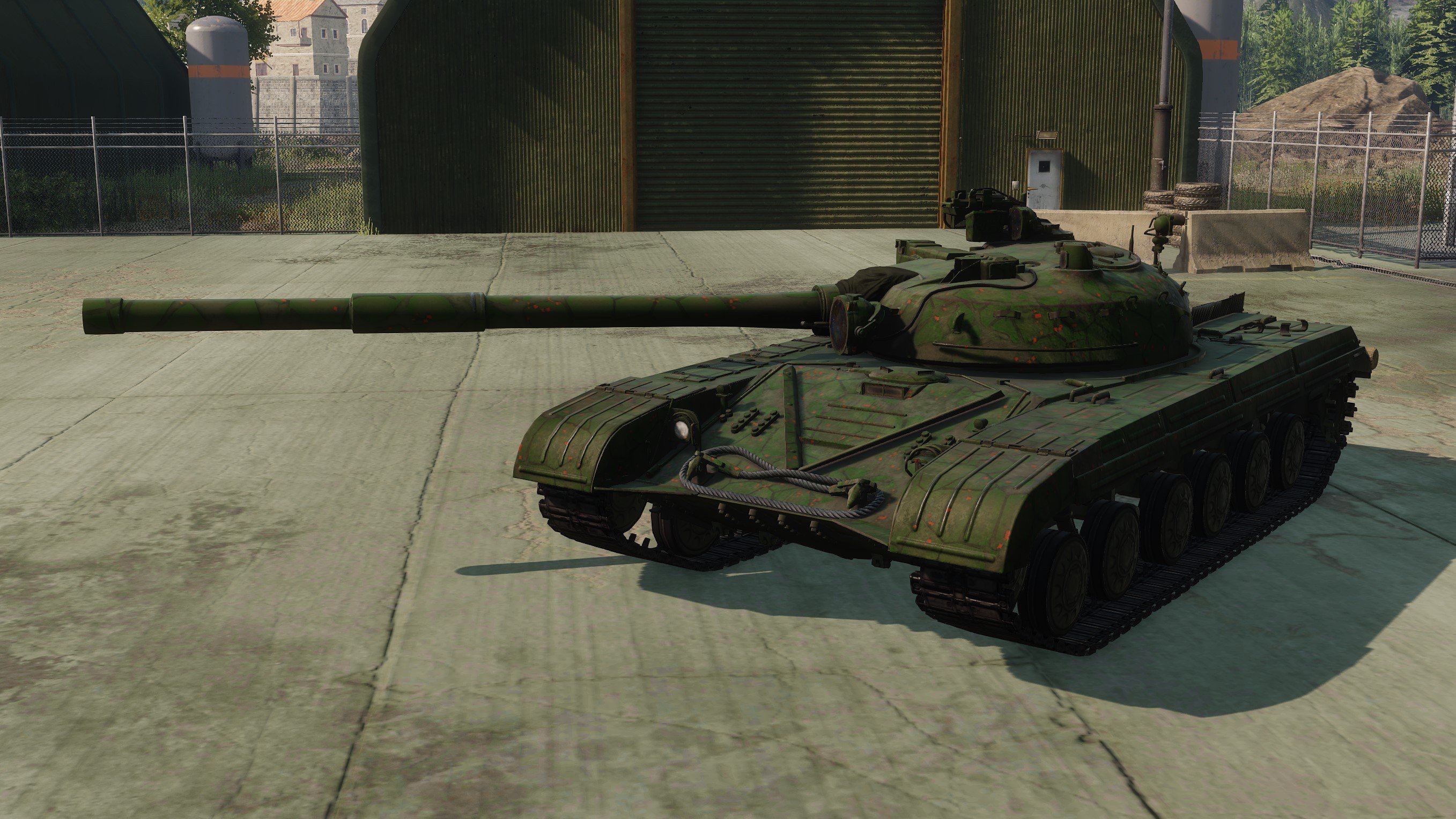 Deeper modernizations followed starting from 1974, but those models will be described in a separate article.

In other words, roughly 2000-2500 T-64A tanks of the early modifications were built. The tank first appeared in public around 1970 but was virtually unknown in the west as it was often mistaken for a far more common T-72 modification due to their generally similar appearance. This misconception was quite common as late as the early 2000s.

According to some recently revealed documents, the British, for example, only took a look at the tank in detail when a large number of them started appearing in East Germany by 1976. The T-64 was the best the Soviets had and thus went to elite and front-line units. The British initially thought it was a T-72 equipped with a gas turbine, but further research quickly unveiled more accurate details. Based on a large quantity of information obtained by their reliable spies, the British painted a surprisingly accurate picture of the Soviet tank, including its gun caliber, elevation, automatic loader rate of fire and other details. Interestingly enough, they even suspected the use of composite armor but did not know what type of inlay was used (they did generally seriously underestimate the tank’s frontal protection). Overall, the impression the tank made was not that good, mostly due to the horrendous crew conditions (at least per British standards). 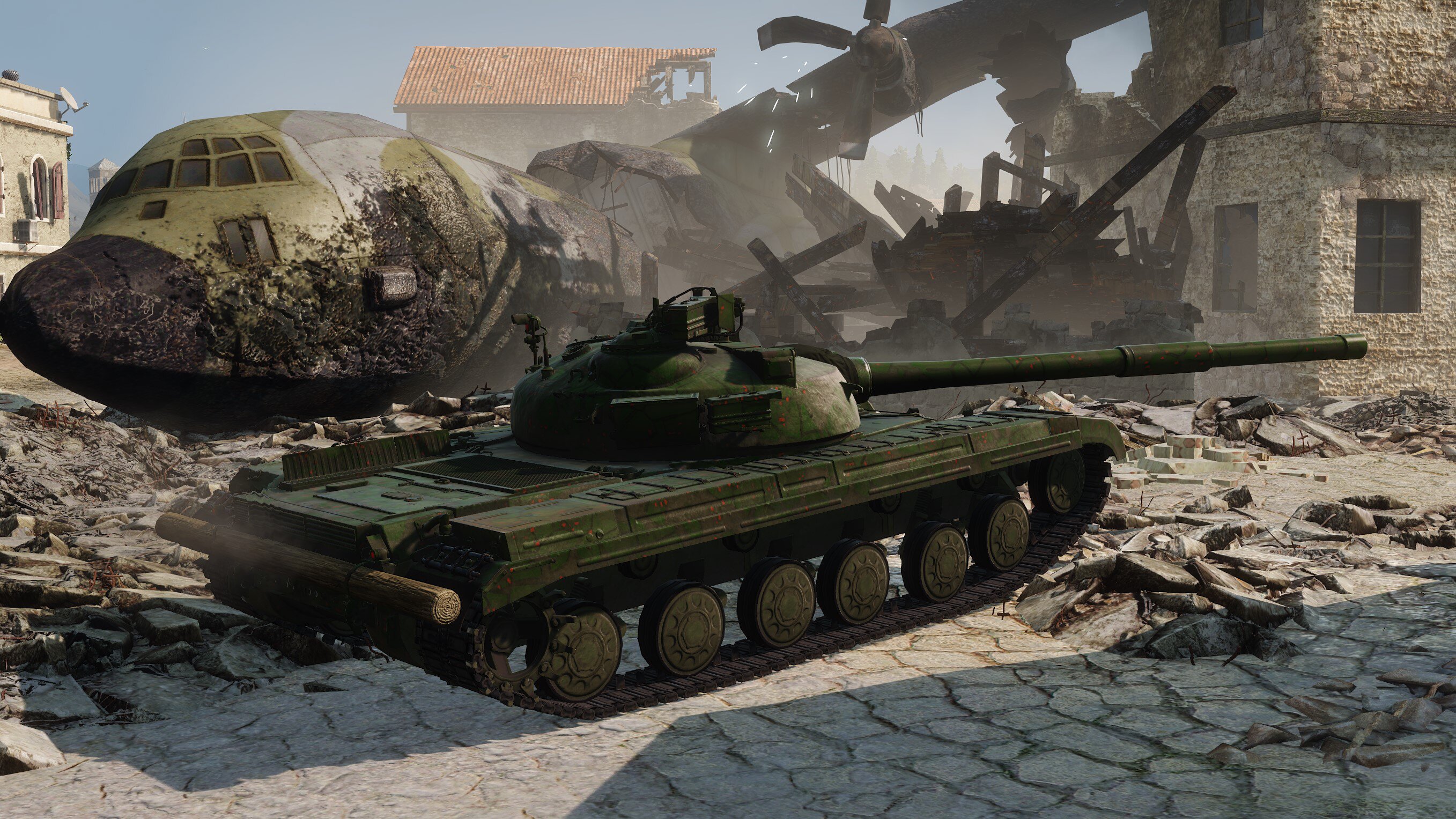 The T-64A was never exported and was rarely used – it seems that only a few vehicles were deployed to Afghanistan. Even though a relatively large number of these vehicles were deployed in East Germany as well as in other countries of the Warsaw Pact, it hasn’t really fired a shot in anger during the Soviet era. After the breakup of the Soviet Union, many T-64s were left in Ukraine and form the mainstay of the Ukrainian armored forces to this day, even though many of them were modernized.

In Armored Warfare, the T-64A Model 1969 is a Tier 4 progression Main Battle Tank.

The Soviet and Russian tanks in general are the brawlers of the Armored Warfare MBT class. While not extremely accurate, they are quite mobile even though their armor is only average. What they excel in is close-range fighting and damage per minute values – all their guns starting from the T-64 and the T-72 Ural are automatically loaded and can reach their full rate of fire without additional required crew training. They use almost exclusively 125mm guns that, especially at lower Tiers, deal massive damage per shot as well and are some of the most powerful weapons in the game until the appearance of the NATO 120mm smoothbore. Additionally, unlike the American tanks, the Russian tanks can fire both HE ammunition and gun-launched guided missiles that, while slow and thwarted by APS, can deliver devastating hits if used properly.

On the downside, they only have three crew members, making their choice of crew perks limited (this will become even more important in the upcoming Crew system overhaul).