The Patton series of universal tanks is as important to the United States military as the T-54/55 series was to the Soviets. Both families of tanks were the backbone of the armored forces of the two most powerful militaries in the world for several decades and – albeit in heavily upgraded forms – continue to serve to this day, occasionally even seeing combat. 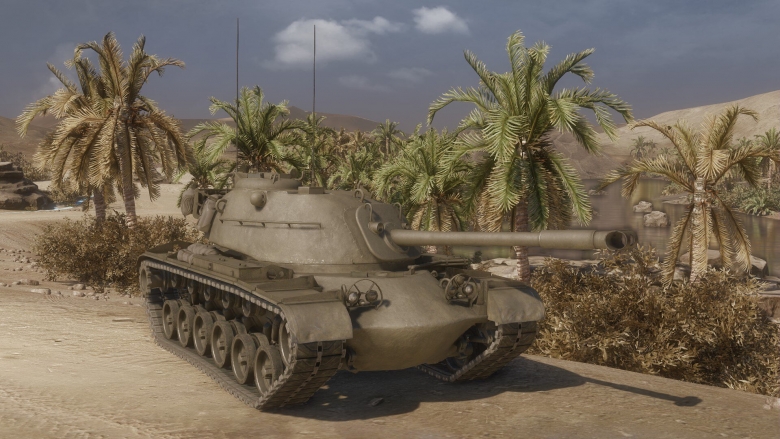 The M48 was developed as a successor to the M47, which was considered an interim solution. The M47 Patton, produced in the early 1950s, was in many ways a stopgap measure, adopted as a reaction to the rapidly escalating war in Korea. The war caught the U.S. military off-guard when it came to tanks. When the hostilities in Korea erupted, the Second World War had been over for less than five years. The U.S. military had slowed down or stopped many arms programs, as nobody suspected the United States to be involved in another major conflict so soon.

This left the United States without enough modern tanks. The U.S. Army was forced to field older vehicles such as the M26 Pershing and the M46 Patton, which essentially was an upgraded Pershing variant. Even the M47 could in a way still be considered an upgraded M46, as it used the same hull with a different turret from a project that was supposed to replace it (the T42 Medium Tank).

The decision to launch M47 production in the summer of 1950 was taken with full awareness of the existing need to produce a tank that would replace both the M46 and M47. 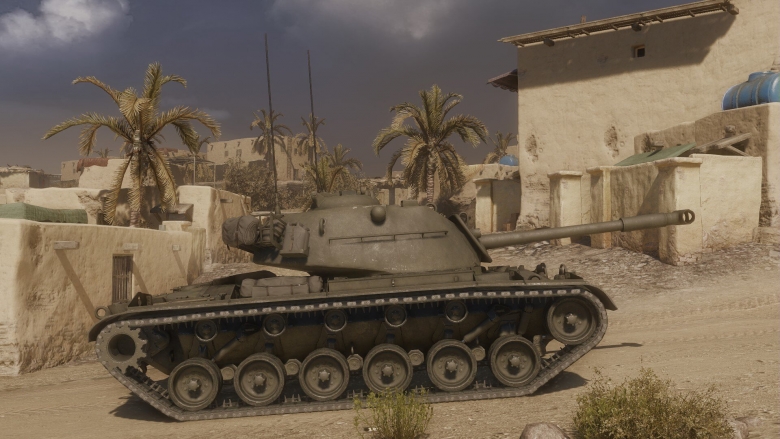 The replacement design (designated T48) was based on earlier work on the T43 Heavy Tank, specifically the rounded armor elements. The frontal hull and turret were both elliptical in shape to improve vehicle protection over the previous M47 design. Development was launched in 1950, but the Ordnance Committee only officially launched the project on February 27 1951 under the designation of 90mm Gun Tank T48. It also issued a list of requirements. It included:

Along with a few other requirements. Chrysler (already working on the project) received approval to build six prototypes.

The first prototype chassis was built by Chrysler in Michigan in January 1952 and delivered for initial trials. It received a turret (also developed by Chrysler) in February 1952 and was thoroughly tested under military supervision in Fort Knox. It's worth noting that, despite the production capacity of its new Newark plant, Chrysler was at that point designated as the designing company. In order to produce sufficient numbers, Ford and GMC were brought in on the project as early as 1951. 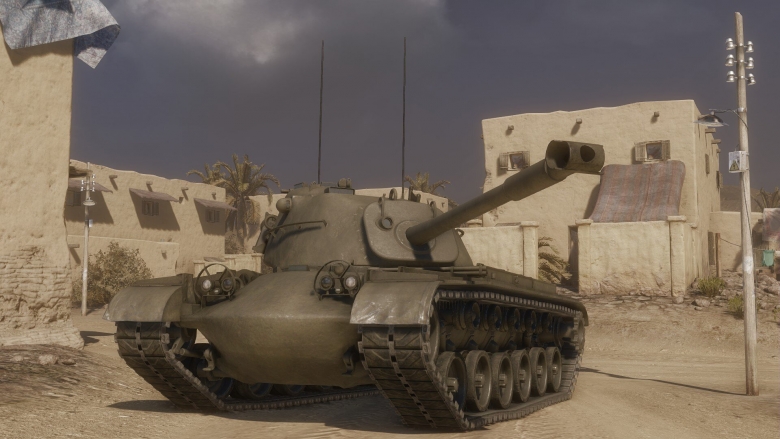 The second prototype was actually built before the first one – in December 1951 in Newark (Delaware), but it was not used for any testing until the conclusion of the first prototype's trials in order to incorporate modifications based on the trials into its design. After that, it was tested in Aberdeen from April 1952. The third prototype (or, in the official terminology, Pilot 3) was completed and delivered to Fort Knox in May and Pilot 4 arrived in July 1952. Based on these tests, further changes were adopted and implemented into Pilot 5 and 6. The Pilot 5 T48 was subsequently assigned to the Aberdeen Proving Grounds in November 1952, while the Pilot 6 T48 went to the United States Marine Corps for testing.

The Pilot T48 tanks were slightly different from each other, but, generally speaking, the combat weight of the T48 was approximately 44.6 tons and it had a crew of four men. It was powered by a 12 cylinder 29.3 liter AV-1790-5B engine (the engine number indicates the displacement in cubic inches – 1790 cu), coupled with a Cross-Drive CD-850-4 transmission. Its maximum speed was approximately 48 km/h (30 mph).

The main armament of the T48 was the 90mm T139 gun with +20/-9 elevation. It carried 60 rounds of main gun ammunition and the rate of fire was approximately 8 rounds per minute with manual loading.

The hull steel armor was also quite thick:

The steel turret was well-curved with the following thicknesses:

The turret values are only indicative as the thickness varied considerably based on the specific spot due to the turret's round shape.

The prototypes were tested until the end of 1952 at both Aberdeen and Fort Knox, but the military wanted the new vehicles to be produced as soon as possible. As a result, mass production of the T48 started in Newark (Delaware) in early 1952 with the first tanks delivered in April 1952, before the tests could even be properly concluded. This caused a number of teething problems, since testing feedback was still flowing in from Fort Knox and Aberdeen while production was already running. 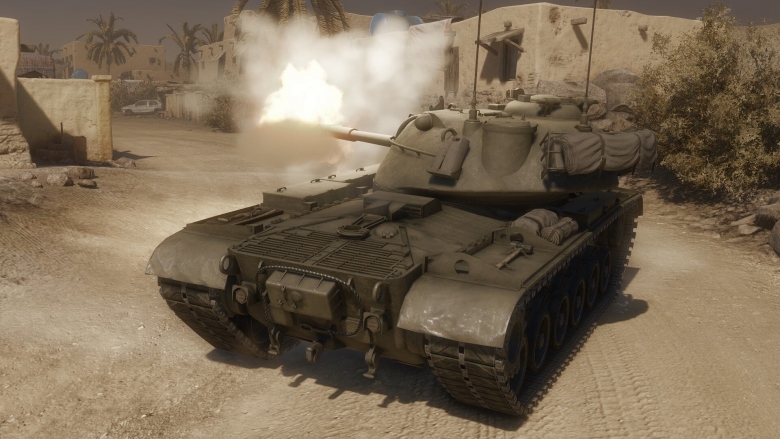 To resolve these issues and implement the changes requested by the trials, a committee of representatives from all the companies involved was established in July 1952. It's also worth noting that the tanks produced by Ford, GMC and Chrysler were each slightly different, although these changes were just minor (for example stowage box shape). By March 1953, 893 T48 tanks had been produced before the vehicle was even officially accepted into service.

Talks were held with the military about the official introduction of the T48 from January 1953. Finally, after three months of talks, the vehicle was officially introduced into service under the designation of 90mm Gun Tank M48 on April 2 1953. It bore the official nickname Patton 48. The vehicle was introduced as restricted issue, so it was to be primarily used for training and not for shipping overseas.

Performance-wise, the early M48 wasn't really that different from the T48. It was a bit heavier – weight was increased to 44.9 tons – but it was powered by the same engine as the T48 (which was also mounted into the M46/M47 series at that point) and had a slightly lower maximum speed (45 km/h, 28 mph).

The gun and the armor were the same as well (although the gun had a different muzzle brake). It did, however, undergo a number of modifications. 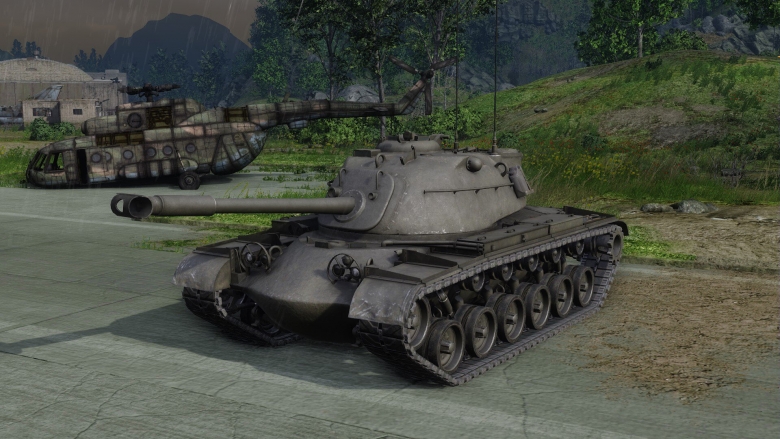 Very early M48s did not have the famous machinegun cupola, relying instead on an externally mounted anti-aircraft machinegun on a low-silhouette cupola by Chrysler. This was not deemed practical as the commander had to expose his torso in order to operate or reload the weapon. To remedy this issue, the M48 received the Aircraft Armaments model cupola with its distinctive shape (the final variant designation of the cupola was M1) from August 1953 onwards.

Another issue was the size of the driver hatch, which was simply too small and could, under certain circumstances, be virtually blocked by the gun, preventing the driver from getting out quickly. To remedy this, larger hatches were introduced quite early into production. And last not but least, the earliest 120 M48s had faulty hulls of inferior quality and were considered unsafe. 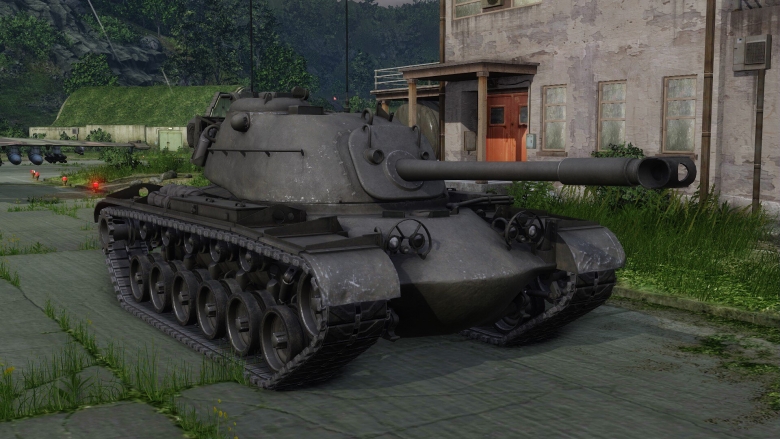 The number of adjustments during production resulted in a large number of M48 variants, all bearing the same designation. A new naming system was adopted on October 25 1954 to differentiate the types. The M48 was split into the following sub-types:

Unlike the later M48 variants, the original M48 was never used in battle – the Korean War was fought only with the M46 and the M47, while the Vietnam War only involved the M48A1 (and the later variants). Since their introduction to service, M48s were used mostly for training. None were exported, although it is possible that some were moved to Europe to guard the west against Soviet invasion. But this was just the beginning for the M48 series, tanks that would remain in service for four decades in the United States alone and that serve in some parts of the world to this day.

Please note that the following information is classified as in development and may be subject to change.

Balance 2.0 will see the M48 change. The current Tier 2 Patton 48 will be moved to Tier 1, replacing the M113 as the only Tier 1 vehicle in Sophie Wölfli's tech tree. As a Tier 1, the M48 will form a counterpart to the T-54, which will also become a Tier 1 vehicle instead of the PT-76. The existing Tier 1 vehicles will either be completely rebalanced and moved to another tier or removed from the game. More information about Update 0.19 changes will be disclosed in the future.