We are proud to announce an ultimate Storyline Campaign Season 1 reward.

Players who complete all the episodes in the event will – amongst other things – obtain an Abrams AGDS! 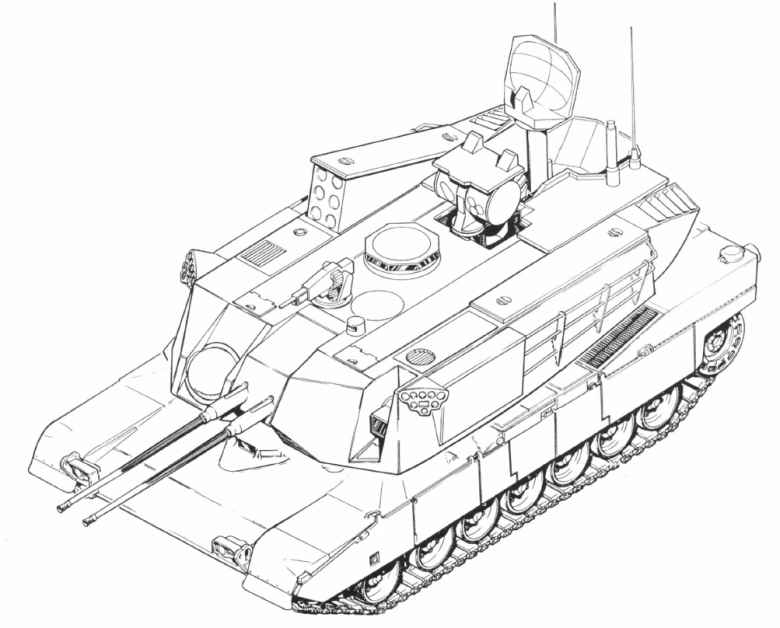 The Abrams AGDS is a vehicle proposal, drafted in July 1996 by Dr. Asher H. Sharoni (a former colonel in the Israeli Defense Forces) and Lawrence D. Bacon from a Californian company called Western Design Howden, a small military contractor for the American Department of Defense, specializing in weapon system development. The company still exists in a sense, but in 2004 it was renamed Meggitt Western Design, sold to the Meggitt PLC group and subsequently merged with its other subsidiaries.

The main reason for the Abrams AGDS proposal was the military situation of the U.S. Army that, like the rest of the world, started to face enemies with improved technological capabilities. These included especially the following threats:

The U.S. Army didn't have much to counter some of these threats, at least not in a universal form. Ever since the 1960s, the Americans had used a combination of the famous M163 Vulcan AA vehicle (equipped with the eponymous 20mm rotary cannon) and the MIM-72 Chaparral missile carrier, armed with a ground version of the famous Sidewinder air-to-air missiles.

This solution had numerous major problems. The Vulcan had quick reaction times and could take out a helicopter easily, but its range was extremely short, about a third of the range of the anti-tank missiles the Soviet Mi-24 Hind used. Additionally, it only had short-range radar because it would be pointless to install a bigger one on a weapon system that only had a maximum range of 1200 meters.

The Chaparral system could engage helicopters at longer distances and had powerful radar, but it took much longer to bring it to bear – time during which the helicopter could pop out of cover, fire a missile and hide again. Additionally, the Chaparral did not have any armor to speak of and was completely defenseless during ground attacks. 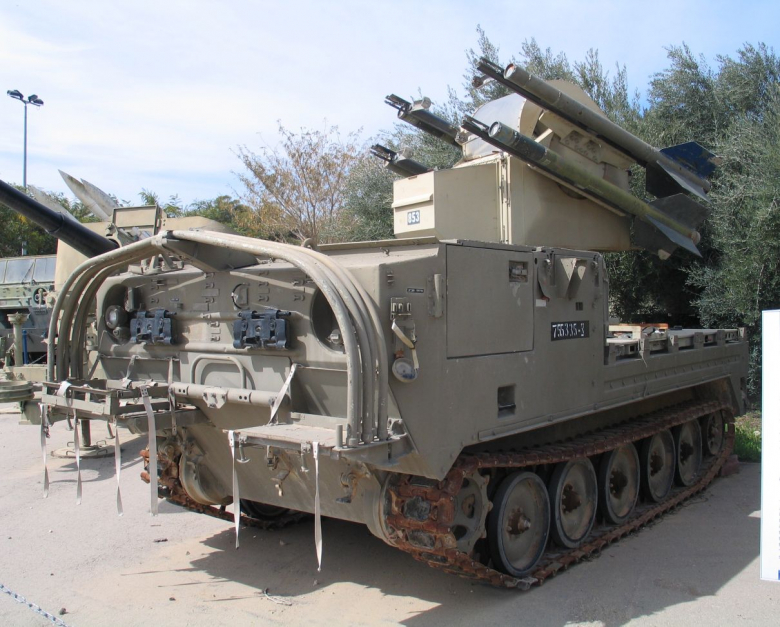 The solution was supposed to be a new, division-level AA system (the program was called DIVAD for Division Air Defense). Several solutions were considered (including quite outrageous ones such as arming a Patton chassis with a giant 30mm GAU-8 Avenger rotary cannon, normally used on the A-10 Thunderbolt II attack plane), but the most promising was the 1978 M247 Sergeant York by Ford Aerospace, essentially a M48 chassis armed with two Bofors 40mm cannons in a new turret. The M247 proved to be a disaster – it was horribly unreliable, inaccurate, and poor at engaging targets. By the end of its six-year-long development phase, in 1984, it was also obsolete as the new Soviet missiles outranged its 40mm cannons. Despite the fact that these issues were known very early on, the project was kept alive until 1985 simply because there was nothing else to replace it with. It was only cancelled in August 1985 after 50 or so of these unreliable monstrosities had been produced, leaving the U.S. Army with nothing except the obsolete Vulcan-Chaparral combo. 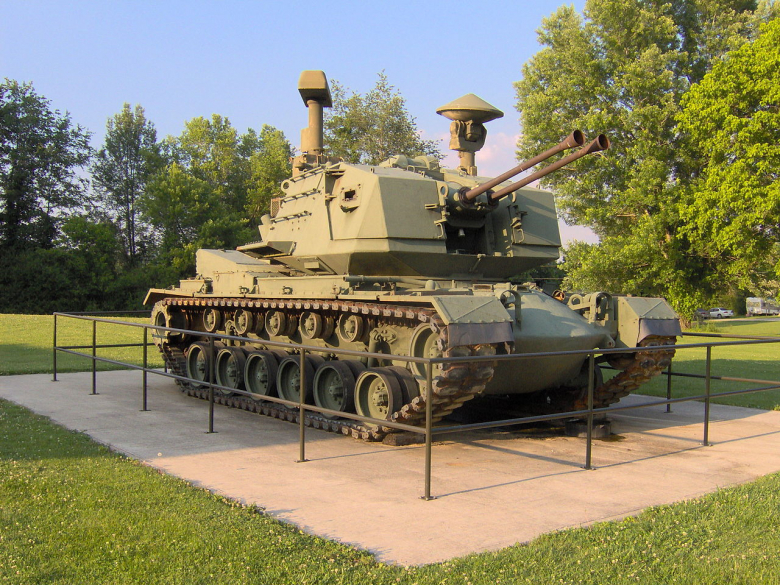 In 1987, another AA system appeared – the ADATS (Air Defense Anti-Tank System) by Oerlikon-Contraves, consisting of a massive missile launcher capable of engaging both ground and air targets. The system was effective but extremely expensive and the project was not accepted into service due to budget constraints (with a small number of vehicles serving in Canada from 1989).

Finally, the U.S. Army settled on the Avenger system for its close-range anti-air needs (a block of FIM-92 Stinger missiles installed on a Humvee chassis), produced from 1987 and officially entering service in 1990. 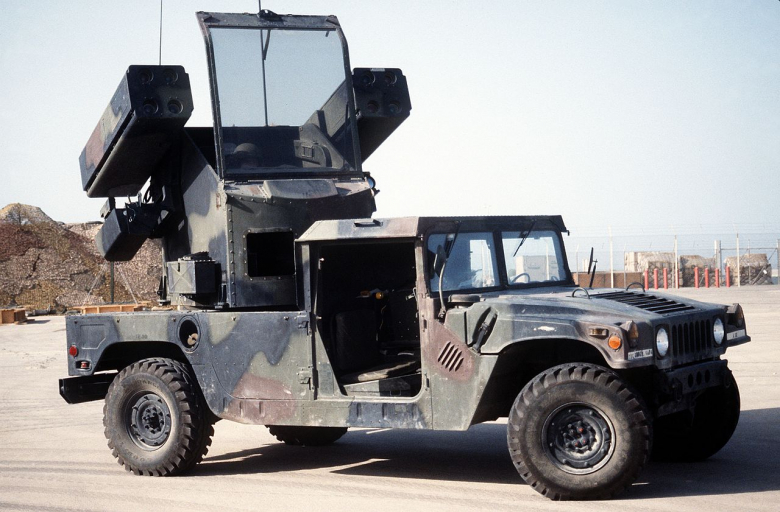 The Avenger didn't really solve the issues that had plagued the American AA systems in the first place. It wasn't capable of laying down ground-fire, nor was it armed with guns and the LAV-AD system that's also in use is restricted to U.S. Marines since the army doesn't use the LAV platform.

In his effort to provide a solution to these issues, Dr. Sharoni reached essentially the same conclusion that materialized in Russia in the form of the Terminator series – a dual purpose vehicle able to knock out both flying and ground targets, including heavily armored ones. He referred to this vehicle as the Armored Ground Defense System (AGDS).

As per his analysis, the requirements for such a vehicle would be as follows:

The weapon systems would have to reflect these requirements as well as the combat experience and the intended tactical use of the vehicle. The AGDS vehicle would accompany armored and infantry units, putting it in the first line of combat (hence the protection requirement). In such situations, encounters with enemy armor were not only possible but likely so the AGDS system would have to have the means to destroy them – and that meant guided missiles.

Another element is the AA experience from past conflicts. By 1996, the lessons from the Soviet Afghan war as well as other conflicts would have made their way to the west. During these wars, the Soviets employed rapid-fire self-propelled AA guns such as the quad 23mm Shilka against Mujahedeen fighters with great results. The 23mm torrent of shells quite literally ripped apart any combatants found in the vehicle's target zone. The same thing appeared a few years later during the Yugoslav Civil War where the twin 30mm Praga self-propelled AA guns were used with deadly efficiency. In other words, two or more autocannons were ideal for that kind of job.

The idea to arm a tank chassis with an anti-aircraft turret (which appeared in the DIVAD program) was also essentially correct. That way, the vehicle would have sufficient mobility and offer considerable protection (providing an obsolete chassis, such as the M48, was not used like in the case of Sergeant York). And so, the Abrams AGDS proposal was born.

The Abrams AGDS concept consists of a standard Abrams hull with a newly-designed turret. This front-line vehicle offers tank-level protection to its crew (that could be further upgraded by Abrams-standard ERA kits), while being able to keep up with the rest of the American formations armed wit Abrams tanks and Bradley IFVs. The vehicle carries three men (commander, gunner, driver).

The hull belongs to the M1A2 variant. Based on Dr. Sharoni's estimations, it can take 20-25 percent extra load compared to the standard M1A2 Abrams (as was later proven by the appearance of heavy additional armor kits). In its basic form, the Abrams AGDS would weigh between 55 and 60 tons. The power plant of choice would still be the Honeywell AGT1500 turbine, producing some 1500 horsepower and bringing the power to weight ratio to some 25 hp/t with maximum speed staying at around 65 km/h. 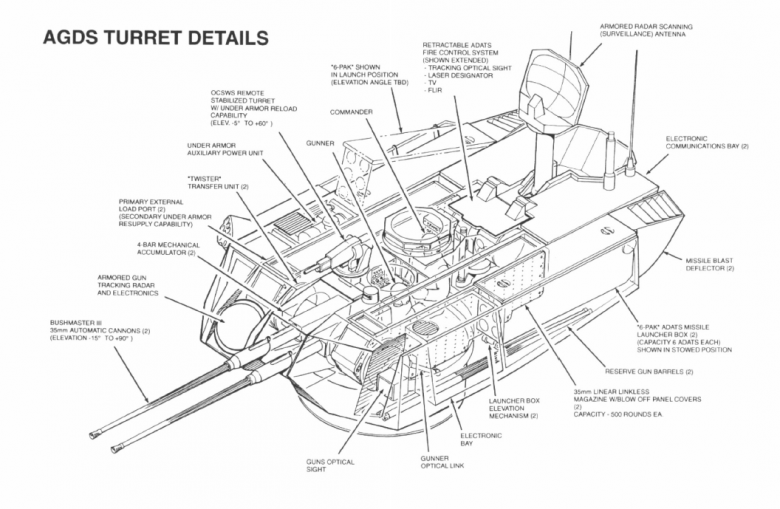 The biggest improvement, however, is the proposed turret. As was stated above, protection-wise this turret is on the same level as its tank counterpart due to the presence of advanced composite armor along with other features such as smoke grenade launchers and blow-off panels. This turret carries two main weapon systems (and a remotely-controlled machine-gun):

Both systems can fire on the move.

The ADATS missiles are the AGDS primary weapon system. They are stored in two retractable banks of six missiles, hidden inside the hull when not in the ready position. These massive 152mm HEAT-FRAG missiles weigh 51kg each (12.5kg of that belongs to the explosive) and can engage both ground and air targets and can penetrate around 900mm of RHAe, although this estimate is quite conservative and possibly incorrect with other sources claiming a performance as high as 1300mm. The maximum range of the system is 10km for both air and ground targets and the terminal missile velocity is Mach 3+ (some 1027 m/s).

The Bushmaster III 35mm autocannons are used for close range combat, against aircraft, helicopters and soft targets. They can fire HE or APFSDS ammunition (thanks to their dual feed system) with a muzzle velocity of 1400 m/s at 250 rounds per minute per gun (500 rounds per minute for both guns combined). To preserve ammunition, the guns are best fired in 1.5 to 2 second bursts. The guns can depress to -15 degrees and elevate to +90 degrees.

Other advantages to the vehicle include:

At least, that was the idea.

In reality, the AGDS Abrams never went beyond the drawing board. Instead of building a dedicated short-range multi-purpose vehicle like it, the Army eventually received the AA Bradley version called M6 Linebacker (its production started in 1997). However, we have selected it because of its unique nature and its realistic design approach.

In Armored Warfare, the Abrams AGDS will be a reward Tier 9 vehicle that will appear in Update 0.23. Thanks to its massive banks of missiles, it will be able to devastate any target it encounters on the battlefield, while its mobility will help it get out in one piece if things get a little too exciting.

Are you interested in obtaining it but haven't completed Episode 1 or Episode 2? Fear not – you will have a chance to catch up in Episode 3, coming in September 2017 – but be warned, the objective will be quite difficult.

Learn more about this bonus objective for the ongoing Storyline Campaign