Forgotten in the Sand

The last part of the convoy was slowly moving through the countryside – heavy haulers followed by the rear-guard host under Sergeant Mourois, sitting on top of his Stryker as if he didn’t have a worry in the world, a cigarette barely hanging from his lips. Seagrove knew this was how the man coped with the danger they were in, the air of calmness a cover for the pressure they were all under.

The worst fighting was behind them, it seemed. Two days ago, they tricked a Clayburn convoy into a clash with one of the local militias and managed to gain considerable distance from their pursuers while they were busy shooting at each other. They were, however, not out of the woods yet. Both proverbial and literal, Seagrove thought, looking around at the forest-covered hills surrounding the road the convoy was moving on.

Major Grey was sitting on top of her tank as usual, an unlit cigarette in her mouth, checking her pockets for a lighter. Seagrove frowned. He never knew her to be a smoker, yet here she was, trying to pick up the habit many men under their command had a hard time dropping. Cigarettes were rare these days.

He caught up to the trailer on which her tank was fastened simply by running. Another problem – they moved way too slow. Hopefully they would pick up the pace down the road. Wordlessly, he sat next to her and offered her his zippo. She looked up in surprise.

“Nope. But as my old man told me once, a man needs to carry only three things to make in the world. A pen, a lighter and a pack of condoms.”

She spat out with laughter, the cigarette falling from her lips straight into the open turret hatch of her tank. A muffled curse was heard from the inside as one of Grey’s crewmembers saw the cigarette and thought that it was lit.

“Goddamn it. Now you owe me a cig,” she frowned but the mock anger never reached her blue eyes.

They sat there, enjoying the view of the countryside, the earthly smell only a late spring can deliver and each other’s company. Closing your eyes, he thought, you’d never be able to tell that there’s a war going on. After a while, she broke the silence.

Despite her unchanged expression, he felt that this time, the question was dead serious.

“Sure. There’s always someone willing to sell something in Istanbul. And we took a whole pile of Clayburn’s credit chits. The old man will pay for our transportation and then some,” he grinned.

Certain sadness crept into her eyes.

“Did I ever tell you how I got to Europe in the first place?”

He raised his eyebrows and glanced at her. She never talked about her past and everyone who knew her knew better than to pry. The question was a rhetorical one and they both knew that. There was another long pause before she continued. “I was eighteen when I was sent here. God, I can’t believe it’s been more than a decade already”, she sighed.

“We were first sent to the El Arish base in North Africa.”

“Never heard of it.”

“You wouldn’t have I suppose,” she said with a sad smile. “It went defunct shortly after I passed through it. But you wouldn’t believe the amount of traffic. The might of the United States at the height of its power. It made us all proud. And then it went all to shit.”

He nodded. For him, the decline of the United States was something he had seen on television, something that could now be found in history book at the end, the “fall of an Empire” chapter. For her, it was personal. A chain of historical events crammed into two decades of her life, tearing her apart as only a slow destruction of the country you grew up loving can.

After another brief pause, he somehow felt that she was ready to talk further.

“Tell me about El Arish.”

El Arish was one of the largest American military bases in the world before budget cuts forced the United States Navy to abandon it. Untold thousands of tons of military materiel got left behind, a number of massive ships deemed too expensive to keep operational and unnecessary under the American isolationist doctrine. The crown jewel amongst those was a Gerald Ford class carrier, left exposed to the vagaries of both sea and desert. 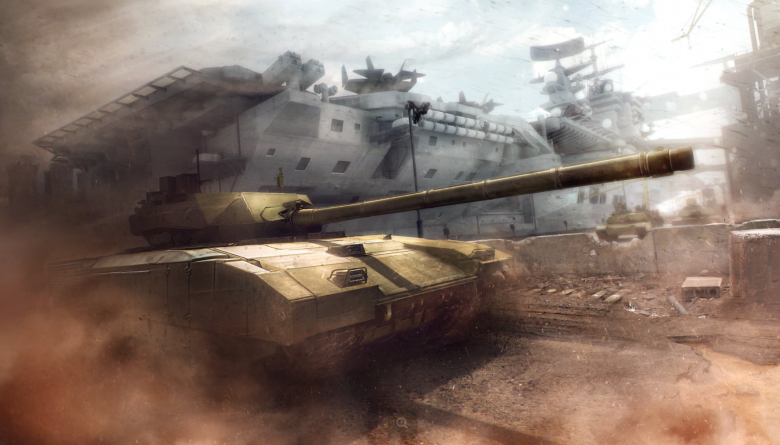 The Seahawks don’t know it yet, but this base will change their fate in ways they can’t possibly imagine, but for now the El Arish base is controlled by a particularly vicious band of mercenaries, who are under attack by local raiders. Should both forces decimate one another during the fighting, the Seahawks would be in a more favorable situation when the time came.

We are happy to present the Episode 1 Bonus Objective – Desert Rush!

From June 9 to June 16, each victorious battle in the Global Operations mode will be rewarded with a special prize of 25 Gold!

If more than 1000 players (counting both servers combined) complete the Bonus Objective (obtain more than 1000 Gold from the event), the goals of Episode 2 will become 20 percent easier!

Good luck commanders, we’ll see you on the battlefield!

Learn about the first faction of the upcoming Storyline Campaign event