One of the things driving western tank development in the late 1980s and 1990s was the fear of next generation Soviet (and later Russian) Main Battle Tanks that were expected to appear in the service of the Red Army in the future. It was thought that these monsters would surpass even the most modern western MBT and much effort was put into developing measures to counter them. In the end, such fears never materialized and the Russians stuck with improving their trusted but far-from-revolutionary T-72 and T-90 MBTs.

The thing about monsters is that sometimes they are real.

In the early 1990s, the Russians were testing several very advanced Main Battle Tank prototypes or demonstrators and one was Object 640, also known under its marketing name of Black Eagle (which is sometimes incorrectly used for Object 195).

Object 640 was developed as a fourth generation tank prototype in Omsk, the manufacturer of the T-80U Main Battle Tank. It featured a large number of truly advanced features that would not be seen in other tanks until the Armata's appearance (in fact, some of the Armata solutions were developed for the Black Eagle).

First, there was the internal layout. To better protect the crew, two of the three men operating the tank – the gunner and the commander – would be sitting far lower than usual. They were still sitting in the turret, but their positions were practically on the floor of the vehicle with their heads roughly on the turret ring level. The crew was protected by an armored capsule and completely isolated from the vehicle's ammo rack and fuel tanks, which meant the crew protection level was significantly increased.

But this new layout was far from the only thing protecting the crew from harm. Object 640 had several levels of protection. Protection, however, costs weight. Significant increases in protection levels with standard tank layout lead to (sometimes very extreme) weight increases with some of the heaviest western MBTs reaching or even surpassing 70 tons due to continuous armor upgrades. The Russians, on the other hand, had in this case the luxury to develop the vehicle from scratch and introduced a number of changes, which allowed the designers to increase protection without increasing the weight too much.

Due to the abovementioned crew layout and the reduced turret size, Object 640's silhouette was lower and the vehicle was therefore harder to hit. The vehicle also partially moved from "pure" armor protection to more advanced measures such as an Active Protection System, even though the armor was still the most important element of it. Armor thickness differed significantly from section to section – the front, the fuel, the ammunition and the crew compartment had the most protection while the sides and rear were significantly thinner.

The frontal hull armor was a combination of layers with gaps between them while the side armor was steel, but equipped with a spall and radiation liner layer. The turret armor also consisted of layers, giving it its distinctive semi-circular look.

Special attention was given to protecting the vehicle from HEAT rounds and missiles (especially the infantry-operated ones such as the American Javelin) by using an advanced ERA kit installed on the front and frontal sides of the vehicle. Compared to its contemporaries, the turret was far better protected from threats from above such as guided artillery ammunition and top attack missiles. According to Russian sources, the combination of ERA and composite armor gave the tank a higher level of frontal protection than that of all other contemporary tanks, including those weighing 60 tons or more.

The lower side protection was compensated by the presence of the Drozd-2 (or Arena) hard-kill Active Protection System as well as the Shtora soft-kill system. The general idea was that while missiles would be caught at longer distances by the Shtora system, HEAT and HE rounds would be eliminated by the hard-kill APS installed.

If the worst happened and the shell went through, the massively thick frontal hull armor would protect the crew, who would have increased chances of survival even if the shell actually penetrated the hull due to the fact that no ammunition was stored there and because of the armored crew capsule.

As for the turret, the bustle (ammo rack) was equipped with blast-off panels. In case of ammunition fire or explosion, the energy would dissipate upwards and to the sides away from the vehicle and not into the crew compartment. 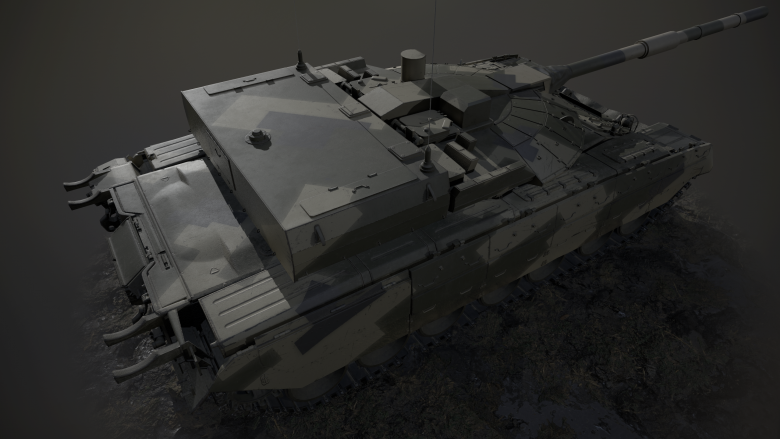 The tank was to be armed with a 125mm gun (likely an advanced variant of the 2A46), automatically loaded from the bustle and powered by a 1500hp gas turbine – more than sufficient for its approximately 50 tons of weight. The suspension was based on the T-80 design and the maximum speed of the vehicle was supposed to be around 80 km/h, but little else is known about the vehicle's performance.

The actual Object 640 – as designed in Omsk – was never built. A mobile mock-up was presented to the public at the VTTV expo in Omsk in 1997, consisting of a T-80U hull with the Object 640 turret on top. Another prototype with a half-finished hull was built as well and both were tested, but the difficult situation of the Omsk Plant in the mid-1990s prevented them from actually building the tank according to the plans. The Russian Ministry of Defense was not interested in a very expensive project so that was the end of the Black Eagle. It's worth noting, however, that the work on it was not in vain and the lessons learned were used later in the modernization of other, more conventional, Main Battle Tanks.

In Armored Warfare, the Black Eagle will be a Tier 10 Special Main Battle Tank.

Learn more about this upcoming Czech and Slovak tracked AFV