One of the biggest challenges the militaries of the ex-Soviet bloc countries such as Poland, the Czech Republic or the Slovak Republic face is what to do with the obsolete Soviet era equipment. Between 1955 and 1991, these countries were a part of the Warsaw Pact, leading– amongst other things – to the standardization of Russian equipment. When the Warsaw Pact era ended, these countries were left with vast stocks of equipment, weapons and ammunition incompatible with the NATO.

As usual, there were several solutions to the problem. Some countries – such as Poland – chose to replace the old vehicles with brand new designs. The process of selecting, trialing and producing new vehicles was almost always very long, tedious and rife with dead ends. On the upside, when the dust settled, Poland was left with modern, upgradeable designs such as the Rosomak.

Another approach was to upgrade the Soviet era vehicles to NATO standards – or at least to match it in combat value. Such conversions are not always successful, but they are almost always more affordable than introducing a brand new design.

One of the vehicles in dire need of replacement or upgrade was always the BMP-2 (or, as it was designated in former Czechoslovakia, BVP-2). While it was an advanced vehicle for its time, by 2010 the BMP series was obsolete. Especially the protection was a massive problem – in the process of making the BMP as light as possible in order to keep it amphibious, the protection levels were reduced to bare minimum with the sides of the vehicle being effectively able to only stop small arms fire. On the modern battlefield, this is a major problem, confirmed by the massive BMP series losses in recent conflicts in Syria, Iraq and Ukraine.

Despite these vulnerabilities, there are still many BMP series vehicles in active service to this day simply because replacing them is too costly. In 2010, the Slovak Republic military was facing the same dilemma as the rest of the BMP series owner – what to do with them? Both the BVP-1 and BVP-2 were still in the service of two major units at that point – the 1st Mechanized Brigade and the 2nd Mechanized Brigade. Much like in Poland a decade earlier, Slovakia chose to modernize. 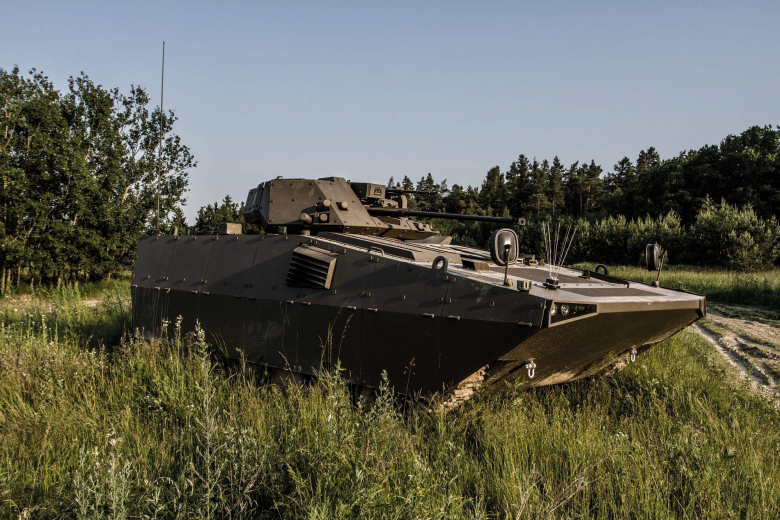 The first contract for BVP-2 modernization was signed between the Slovak Ministry of Defense and the Military Technical and Testing Institute Záhorie on March 22 2010 under the task codename “Šakal” (Jackal). The goal of this contract was to propose an improvement to the existing fleet of BVP-2s, not necessarily to introduce a brand new vehicle. These modified BVPs were sometimes referred to as BVP-2M.

The whole contract was very vague. The Ministry of Defense did not specify any requirements early on and as a result, several general studies were made, focusing on the BVP accuracy. While most details are classified, around 2012, a deep modernization was proposed. This included major structural changes as well as a new, modernized turret for the BVP-2.

On the Czech side, the company Excalibur Army spol. s.r.o. was working on an upgraded BVP variant practically since 2009, resulting in several prototypes, the latest of which was the BVP-M2 CZSK. It made therefore a lot of sense for them to partner up with their Slovak colleagues in their search for the future BVP series upgrade.

The BVP-M2 CZSK demonstrator was a massive BVP-2 overhaul (only approximately 50 percent of components remained from the original BVP). It had a crew of three (gunner, commander and driver) and could carry six to seven men in the back, depending on configuration.

The biggest change was the hull of the vehicle. It was made much taller (the roof was 20cm higher) to house a new TURRA 30 remote-controlled turret. The maximum combat weight was 18 tons (a 4 ton increase from the original 14 tons of the BVP-2). To maintain its performance, the demonstrator was powered by a 400hp 9.3 liter Caterpillar C9.3 turbocharged diesel paired with an upgraded automatic transmission by Norgren. If needed, the engine could be up-tuned to 430hp. The maximum speed of the vehicle was approximately 65 km/h (with off-road speed of 40 km/h). 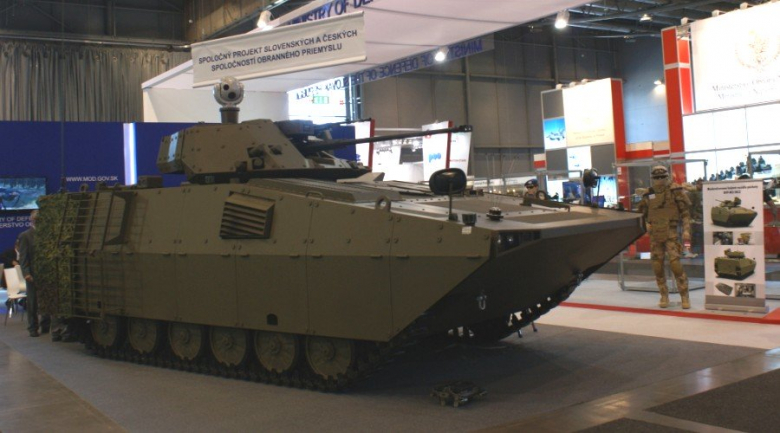 The basic steel hull protection of the hull was STANAG 4569 Level 2 (against 7.62mm AP rounds and 155mm shell blasts 80 meters away) but could be upgraded to Level 3 (modern 7.62mm APCR ammunition and 155mm shell blasts 60 meters away) thanks to a customizable add-on armor system. The sides could also be protected by slat armor. The bottom of the vehicle was also made thicker but it still corresponded to Level 1 anti-mine protection only.

The BVP-M2 CZSK demonstrator was equipped with an unmanned TURRA 30 turret, developed by the Slovak company EVPÚ a.s. Nová Dubnica. In its basic form, the turret is armed with the same gun BVP-2 uses (the Soviet 30mm 2A42), but the gun can be replaced with a modern Excalibur Army 30mm CZ30 automatic cannon, or with the Mk.44 Bushmaster II chain gun. The gun could depress to -10 degrees, elevate to +70 degrees and was fully stabilized.

The secondary weapon is a coaxial 7.62mm PKT machinegun. The turret can also be equipped with an ATGM launcher – specifically the Russian 9K111-1 Konkurs system (two tubes) or the Israeli Spike (also two tubes). The turret was also equipped with Galix smoke grenade launchers. It’s worth noting that the turret was modular and was offered for other hulls as well. For example, mating the TURRA 30 turret with a KTO Rosomak hull produced Scipio IFV.

The vehicle was also equipped with a C4I integrated combat system to connect to the battlefield management networks of the future.

The BVP-M2 CZSK demonstrator was introduced to public during the 2013 IDET military expo in Brno (Czech Republic) as a joint Czech and Slovak venture but the Czech military was not exceedingly interested. The Slovaks, however, were and the Slovak Minister of Defense and the Chief of Staff announced that the modernization of existing BVP-2 vehicles could start until the end of 2013.

Another Slovak BVP-2 was rebuilt to the BVP-M2 standard and was used in a number of military trials. This vehicle already received a different name – BVP Šakal (or IFV Šakal in western sources).

The trials were not very successful and a number of issues of the vehicle were discovered. These include:

The 30mm caliber was also not considered to have a future simply because it was too weak to deal with armored targets and for softer targets a smaller caliber (such as the 20mm) was more than enough. But the biggest issue was the fact that the BVP-2 hull was simply at its limits. The vehicle could not carry considerably heavier 40mm cannon turrets. 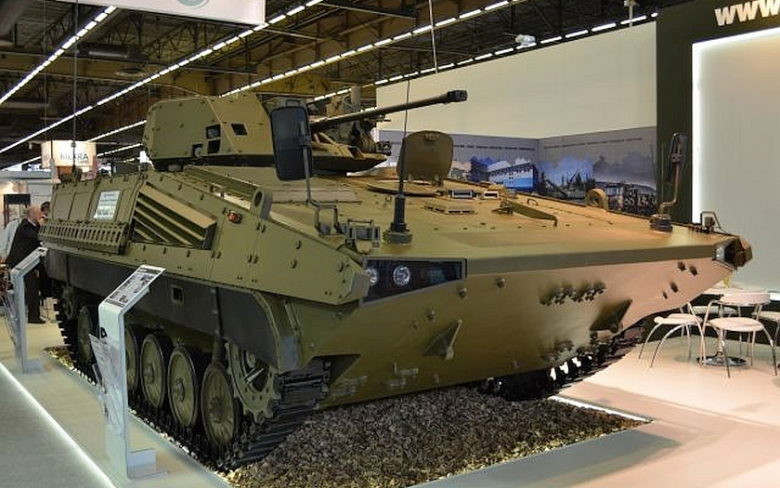 Arguments in favor of the vehicle’s modernization included:

Even these could not outweigh the negative opinions of both the Slovak and the Czech militaries and the IFV Šakal was refused. An overhauled, modernized version called BMP-M2-EXCALIBUR based on BMP-1 with Rafael Samson Mk.II remote-controlled turret appeared in 2014, but that was essentially a different vehicle (even though it used many solutions). As for the IFV Šakal itself, it did not find any customers but is offered by Excalibur Army to this day.

In Armored Warfare, the IFV Šakal will be a progression vehicle in the upcoming Update 0.20 Czechoslovak and Polish AFV/TD line.