Today, we are finally getting to the MBT everyone’s been waiting for – or, rather, its prototype. We are, of course, talking about the iconic French Char Leclerc.

Even though the Leclerc MBT is still one of the most modern tanks around, its beginnings can be traced back to the time when the first AMX-30 tanks were rolling off the assembly lines – the 1960s. The AMX-30 was, of course, a very conventional tank and even though the French were quite happy with it, they were also aware of the NATO intelligence reports about the high quality of Soviet MBTs.

Those reports painted a very bleak picture because, the way the French saw it, they’d be quite outgunned in an all-out showdown with the Soviet Union, even with the military might of the United States and West Germany on their side. The vast manpower resources of the Red Army allowed the Soviets to potentially soak up losses the French would never be able to afford. The French pondered this question and came up with a concept called EPC.

EPC stands for “Engin Principal de Combat” – a “Main Combat Vehicle.” It was a program to develop a machine (not necessarily a tank at first) that would be very expensive but also packed with cutting edge technology that would allow its operator to defeat a large number of enemy armored vehicles. France wasn’t the only NATO country to think this way – this is how the MBT-70/KPz-70 program came to be as well. But where the other nations failed and eventually turned towards a more affordable solution, the French continued on until the program’s successful conclusion.

As you can see, the program was initially very vaguely defined and various discussions about multiple combat platforms took more than a decade. For example, at one point, a high-tech helicopter was preferred to an armored vehicle, but, amongst other things, due to truly enormous costs tied to anything aviation-related, the French finally decided on a tank that would just blow the Soviet competition out of the water. And it was high time too – in the second half of the 1970s, the AMX-30 tank was badly outperformed by the newest Soviet designs.

As was customary at the time, the French first tried a joint project with West Germany. The Germans were already deep in the development of their Leopard 2 tanks and basically offered the French to co-develop some components for it, including a turret. The bottom line was that the French would have to use a German-built tank built in Germany. One does not need a lot of understanding of politics to figure out how that discussion went.

Sometimes during the abovementioned attempt, the AMX company presumably took a long look at the Leopard 2 plans and they really liked what they saw, especially the Leopard 2 armor layout with all the air-gaps that had the same effect as composite armor. These lessons were then applied to the EPC program, resulting in two tanks:

Both of these machines were export-oriented (the French were modernizing their AMX-30B tanks to the AMX-30B2 standard). Especially the AMX-40 was a major leap forward compared to the AMX-30B, incorporating many new features, including a French NATO-compatible 120mm smoothbore gun.

Unfortunately, they failed to attract any attention and remained in prototype stage only. Their real value was in the fact that they allowed the AMX engineers to test many solutions and elements that would eventually find their way into the Leclerc. 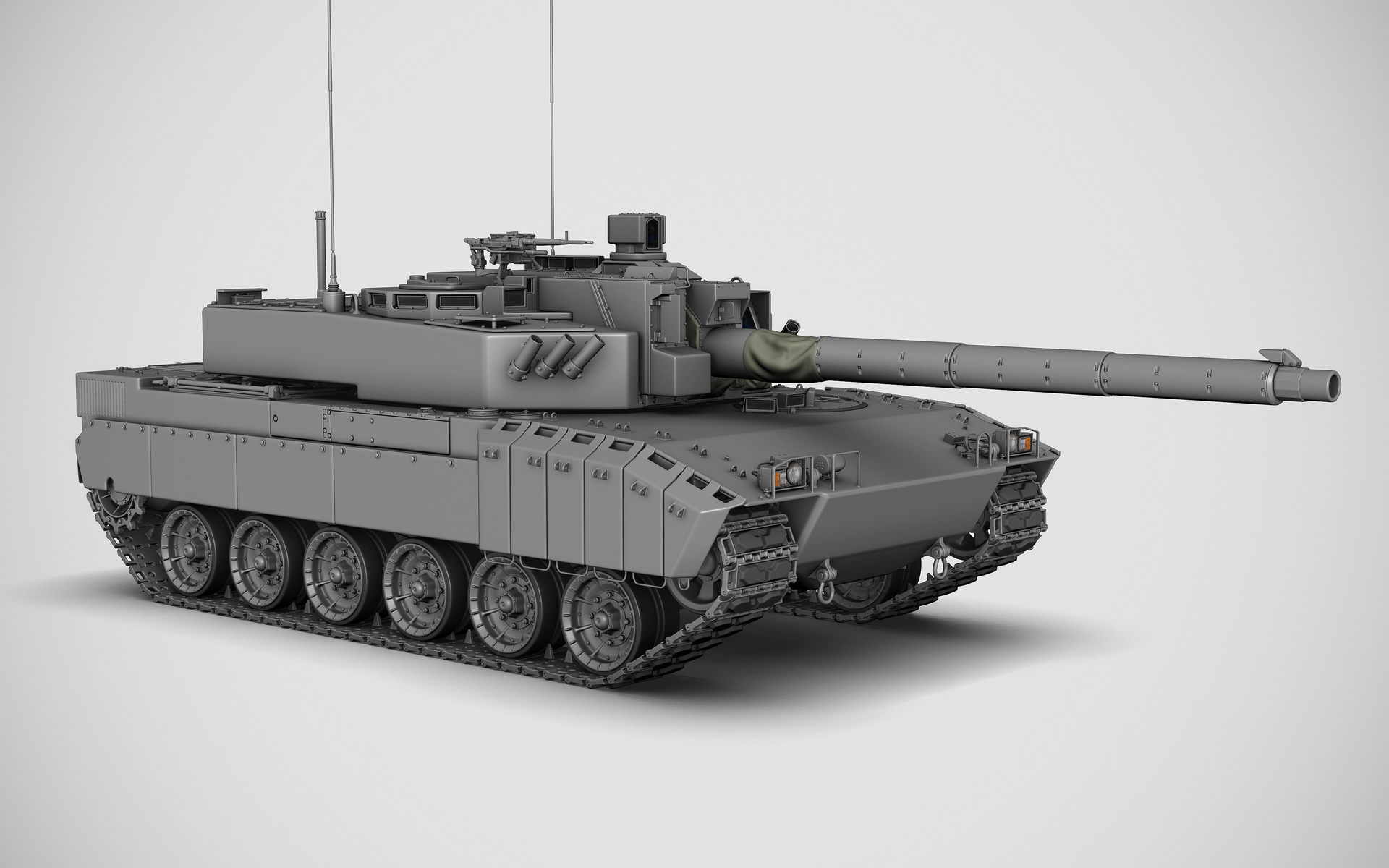 In any case, the 1980s was a tumultuous time, full of rapid development. The EPC program was no different. In the first half of the 1980s, the French developed a brand-new turret called TSC. What made it quite different from the other NATO designs was the presence of an automatic loading mechanism and the related reduction of turret crew from three to two men since a loader was no longer necessary. Unlike the Germans, the French found the automatic loading to be more advantageous compared to the manual one. The reasons for that are related to the abovementioned lack of manpower (whereas the Germans did prefer the reliability of a human loader) and the general size and weight of the shells feeding the powerful 120mm gun the future tank was to be armed with.

In 1986, the EPC program was renamed to “Leclerc” in honor of Philippe François Marie Leclerc de Hauteclocque, a famous Free French commander during the Second World War, who died in 1947.

The first real Leclerc prototype came along – the MSC (Mulet Systéme Complet, or Complete System Testbed). It was quite different from what would later become the production Leclerc MBT and, as its name suggests, served as a testing tool for multiple Leclerc technologies, especially the automatic loading mechanism that loaded the gun from a turret bustle ammunition rack. The vehicle shown in Armored Warfare is based on this initial prototype.

The tank weighed 52.7 tons and had a crew of three. It was protected by composite armor, consisting of layers of steel and aluminum with the protection levels being roughly equal to the early German Leopard 2 series. Additionally, its frontal flanks were protected by segmented “skirts.” Some older sources claimed that these skirts were in fact ERA segments but it seems that the more likely version is, based on sources available, that these plates are in fact NERA segments. Further protection was provided by two banks of GALIX smoke grenade launchers.

The armament consisted mainly of 120mm L/52 smoothbore cannon called GIAT CN 120-26, fed by a Creusot-Loire autoloader, providing a steady rate of fire of 10 rounds per minute (can reach 12 rounds per minute for limited periods of time). The tank carried 40 rounds, 24 of which were located in the turret bustle, accessed by the automatic loading mechanism. The gun was fully stabilized and was equipped with a muzzle reference system and a thermal shroud. Its maximum elevation was +15 degrees and its maximum depression was -8 degrees.

The tank had several French-made ammunition types available, including:

The electronics were cutting-edge for its time and included a laser rangefinder, panoramic sights and a thermal imager for the commander as well as an advanced digital FCS. Later prototypes would also be equipped with a precursor to a real Battlefield Management System.

The whole thing was powered by a UNIDIESEL V8X 1500 16.47 liter V8 supercharged diesel engine producing, as its name suggests, 1500hp. This engine was developed by a company called Wärtsilä and was essentially the same engine that the production Leclerc would use – the biggest difference was a different supercharger used on the prototype and, of course, a different designation. It was paired with a SOMA Minerva ESM 500 automatic transmission, allowing for a maximum speed of some 70 km/h (50 km/h off-road). The suspension was a conventional torsion bar one.

Overall, the tank was well-armed and rather compact – smaller than its other western counterparts at least, which resulted in relatively lower weight and, thanks to its powerful engine, excellent mobility and off-road capabilities.

This vehicle appeared in several configurations between 1986 and 1989 and underwent numerous tests, which resulted in the construction of the first real Leclerc prototypes that were even more packed with modern electronics, resulting in the biggest difference between the Leclerc and other western MBTs – the use of digital technologies. The Leclerc, even in its prototype stage, featured a large number of computerized systems, allowing the crew to receive feedback from its systems in real time, as well as the use of one of the first true Battlefield Management Systems.

The first three prototypes built in 1989 were nicknamed Arés, Bayard and Carnot. Three more were built a year later – these were called Duroc, Estienne and Foch. These names were specifically picked for their relation to war or cavalry (Bayard was a legendary knight, for example). All six underwent a lot of testing and some (especially the Bayard one) were heavily modified during the process to fix any issues encountered. At the same time, they were shown to public as the future of French armored forces with large numbers of them being envisaged – the initial requirement called for no fewer than 1.400 vehicles to replace the French Army AMX-30B as soon as possible. The tank fulfilled the expectations and everything was going according to the French military plans – until the collapse of the Soviet Union. But that is a story for another “In Development” article.

In Armored Warfare, the Leclerc Prototype will be a Tier 7 progression Main Battle Tank. Much like its predecessors, it will be an agile and mobile MBT with additional armor upgrades – the modular side skirts. It will boast a powerful 120mm gun but what will make it truly special will be its advanced FCS ability to mark enemy targets on the battlefield.

Once per several minutes, the tank will have the option to mark all enemy targets within 100 meters. These marked targets will then take higher damage (the same way as with the AFV class ability). This will make the tank exceptionally suitable for leading a charge – or defeating massed enemy troops. A single Leclerc Prototype, if it gets close to a static opposing team group position (which a fancy term for a bunch of campers) will be able to turn the tide of battle by significantly increasing your team’s damage output against such marked targets.