In our previous article, we mentioned that the C 1 Ariete MBT from the current British MBT branch will be moved as an alternative Tier 8 vehicle to the VCAC Mephisto to the vehicle pool of Francine De Laroche and that it will be replaced by a different vehicle in the British branch. Today, we’d like to tell you more about its replacement – the Al-Hussein Main Battle Tank. 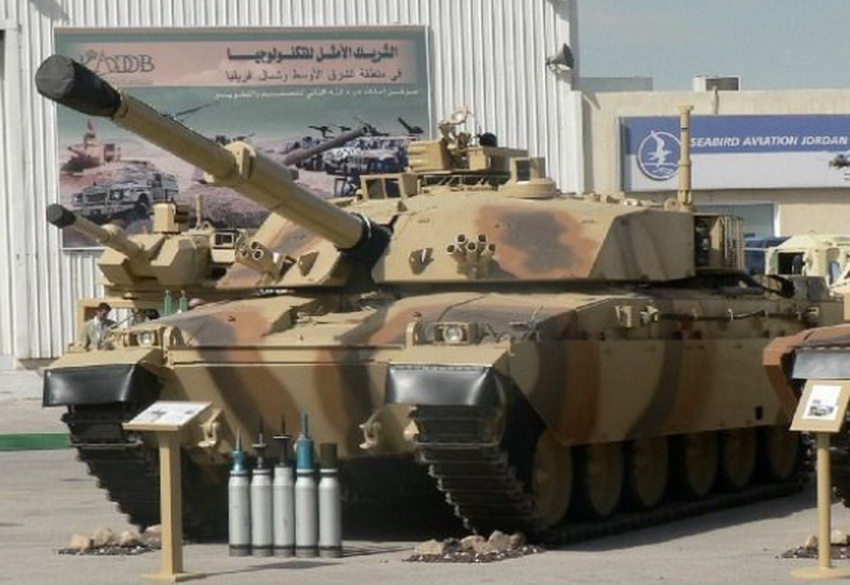 The original Al-Hussein is nothing more than a standard British Challenger 1, sold to the Kingdom of Jordan after being replaced by the Challenger 2 MBT in British service. The Jordanians purchased around four hundred of the older Challenger 1 tanks from the British between 1999 and 2004 in order to replace their aging Centurions (different sources list different numbers, from 392 to 402).

In Jordanian service, the vehicle was renamed to Al-Hussein after king Hussein of Jordan, a successful ruler of the country and the father of the current Jordanian king, Abdullah II. Upon purchase, the vehicle was initially left in its original state. That was, of course, considered to be a problem. The tank was based on the technology from the 1970s and 1980s and entered service for the first time in 1983. Its 120mm rifled gun, an adequate piece back then, was quite an oddity in the 21st century and suffered from only quite obsolete ammunition being available for it.

In other words, it was not a sufficient tool to deal with the Israeli Merkavas and even though Jordan was not interested in another middle-eastern adventure that involved Israel, it was most certainly a consideration. That was why the King Abdullah Design and Development Bureau (KADDB) was tasked with remedying the situation.

The Jordanians were, of course, no strangers to various tank upgrades and quickly recognized the firepower combined with an old TOGS-based Fire Control System to be the biggest flaws of the vehicle. Both had to be replaced in order to give the old tank new teeth and there was fortunately a great option commercially available – the Swiss RUAG CTG (Compact Tank Gun) 120mm L/50 smoothbore.

They chose two directions to go about improving the Challenger 1:

The first approach resulted in an Al-Hussein hull with a new FALCON turret, which is also available in Armored Warfare as a Premium vehicle. Unveiled to the public in 2003, the Falcon turret represented a radical departure from the original Challenger 1 concept of an extremely well-protected turret. The crew was instead moved to the hull, enhancing its safety even further. The turret was also extremely low, reducing the vehicle's silhouette size and making it hard to hit.

Another main advantage of the concept is increased firepower. The turret is armed with 120mm L/50 Swiss RUAG Defense Systems smoothbore cannon, improving the Al-Hussein's gun performance to NATO smoothbore levels. Firing trials were complete by 2005. The gun was automatically loaded and its rate of fire was listed at up to 8 rounds per minute. It was capable of firing standard NATO 120mm ammunition. The turret was also mounted with automatic fire suppression and NBC protection systems.

Unfortunately, for unknown reasons the FALCON turret program was never pushed to the mass-production stage. An improved version called FALCON 2 was unveiled later and there was also news about the development of a FALCON 3 turret, but there are currently no known plans for FALCON production for the Al-Hussein tank platform or any other vehicle in Jordanian service.

The latter approach met roughly similar fate. In this case, the Jordanians took a standard Challenger 1 turret and replaced the old rifled gun with the abovementioned RUAG CTG (only manually loaded) and replaced the old FCS with a brand-new one by Raytheon. The FCS was the same model used on the upgraded Jordanian M60A3 tanks – the Jordanians were therefore very familiar with its capabilities. It featured:

As an option, the integration of a CITV thermal imager was also proposed (and a mock-up was added to the prototypes), which would allow the crew to operate in hunter-killer mode where the commander would select new target while the gunner engaged the previous one. With these upgrades, the turret is easily recognized by the absence of the TOGS sights on the right side of it. The gun had a new electric control system by Raytech Jordan.

The turret armor was also allegedly improved but to what levels is not known. The tank also featured:

The first prototype was unveiled in 2004 and was referred to as Al-Hussein Hybrid. It was followed by three more over the next couple of years, each with a somewhat different configuration (the early models had the CITV mounted on top of the gunner optics while the later model had it moved to the opposite side from the gun).

But, like the FALCON, this model did not gain any significant traction in the Jordanian military either even though it was far more readily available than the FALCON turret series. As various trials and negotiations dragged on, the army grew ever more impatient and finally decided in 2018 to replace the entire stock of its Hussein tanks with wheeled Centauro tank destroyers due to their general obsolescence and the lack of spare parts.

In Armored Warfare, the Al-Hussein will be a Tier 8 progression Main Battle Tank. Gameplay-wise, it will be fairly consistent with the rest of the Challenger series in the game as a very tough vehicle capable of taking a lot of punishment (unlike the Ariete which will be more at home amongst the Leclercs).

The main difference will be the presence of the 120mm RUAG gun. This gun is already in the game as the main weapon of the Challenger 1 FALCON but in the Al-Hussein, the gun will be loaded manually – the tank will feature a loader. With the performance similar to that of a Leopard 2, this weapon will call for a somewhat different play style as it cannot rely on the presence of HESH rounds. We are currently considering whether to add a Ready Rack mechanism thanks to the existence of the loading assistant on its real life counterpart. Another difference between this tank and the standard Challenger 1 will be the presence of an ERA kit, based on the M60 Phoenix design.

We hope that you will enjoy this tank and will see you on the battlefield!