In today’s Developer Diary, we’d like to tell you more about the spotting system changes that we are planning for Update 0.32.

The first change concerns smoke spotting mechanics. The way it is right now, deploying smoke basically makes your vehicle disappear from everyone instead of just the spotter who has his line of sight obscured by your smoke, as long as at least one spotter line of sight gets broken. 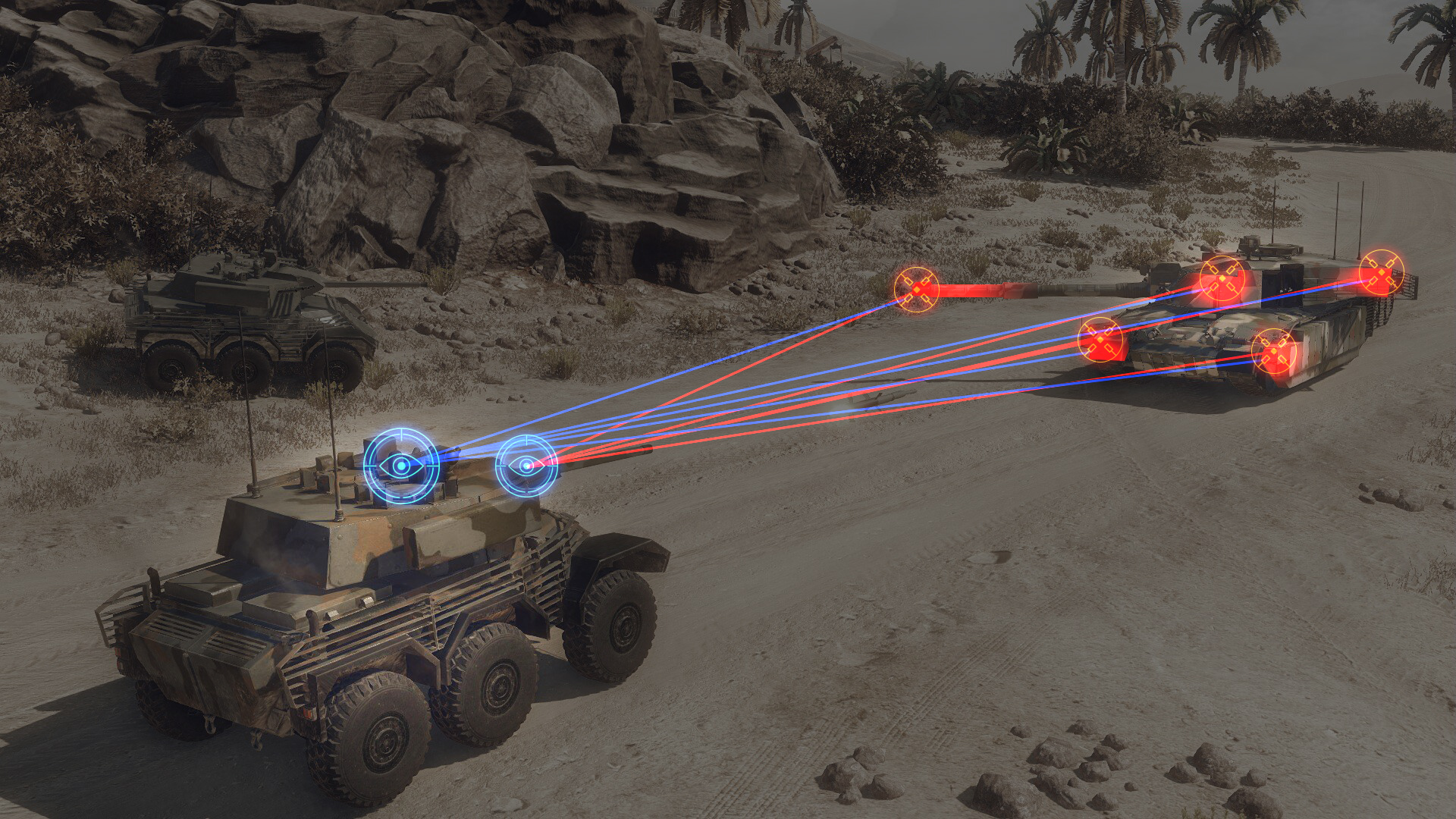 In other words, deploying forward-facing smoke that will interfere with the line of sight of the spotter in front of you will also make you disappear from a spotter that is, for example, beside you, along with everyone else, for whom you are not directly in their line of sight.

This is very counterintuitive and leads to some strange situations of tanks disappearing into thin air on the battlefield. As a side note, this system – due to the way it is programmed – causes some server performance issues.

In Update 0.32, we will be fixing it so that each vehicle’s line of sight will be considered individually. If you break one line of sight with your smoke but someone else still sees you, you will no longer disappear and will remain spotted. Additionally, the system will be made more responsive with more spotting checks in place. Driving behind an active smokescreen will make your vehicle instantly disappear without having to wait for another spotting check (which do happen less often, the longer the distance is).

But that’s not all.

We’ll be also overhauling the way camouflage bonus works for bushes and other pieces of foliage. As you know, these bushes provide environmental camouflage bonuses and their mechanism is described in a dedicated article.

In Update 0.32, we’ll be changing the camouflage they provide from a fixed amount to an equation where the environmental camouflage bonus will depend on the length of the line of sight intersection of the bush’s boundaries. This may sound really weird, but what this means is that the more leaves there are between the eye of the spotter and the spotted vehicle, the harder the vehicle it is to spot.

Starting from Update 0.32, using a situation where you are spotting an enemy vehicle:

This change resolves some issues with the existing spotting system, where various bushes – no matter how small – would add the same amount of camouflage. Now, if the bush is small, it provides less camouflage than it did before without us having to address every single bush in the game individually.

It’s worth noting that the camouflage provided by foliage using this new system will not exceed the old one since there is a cap on the bonus provided by the bush size. Bushes will not suddenly start providing more camouflage – quite the contrary. Those tiny bushes that were just as effective as the old ones will now provide much less cover. It’s therefore very important to pay attention to the directional camouflage indicator in the lower left corner of the screen. 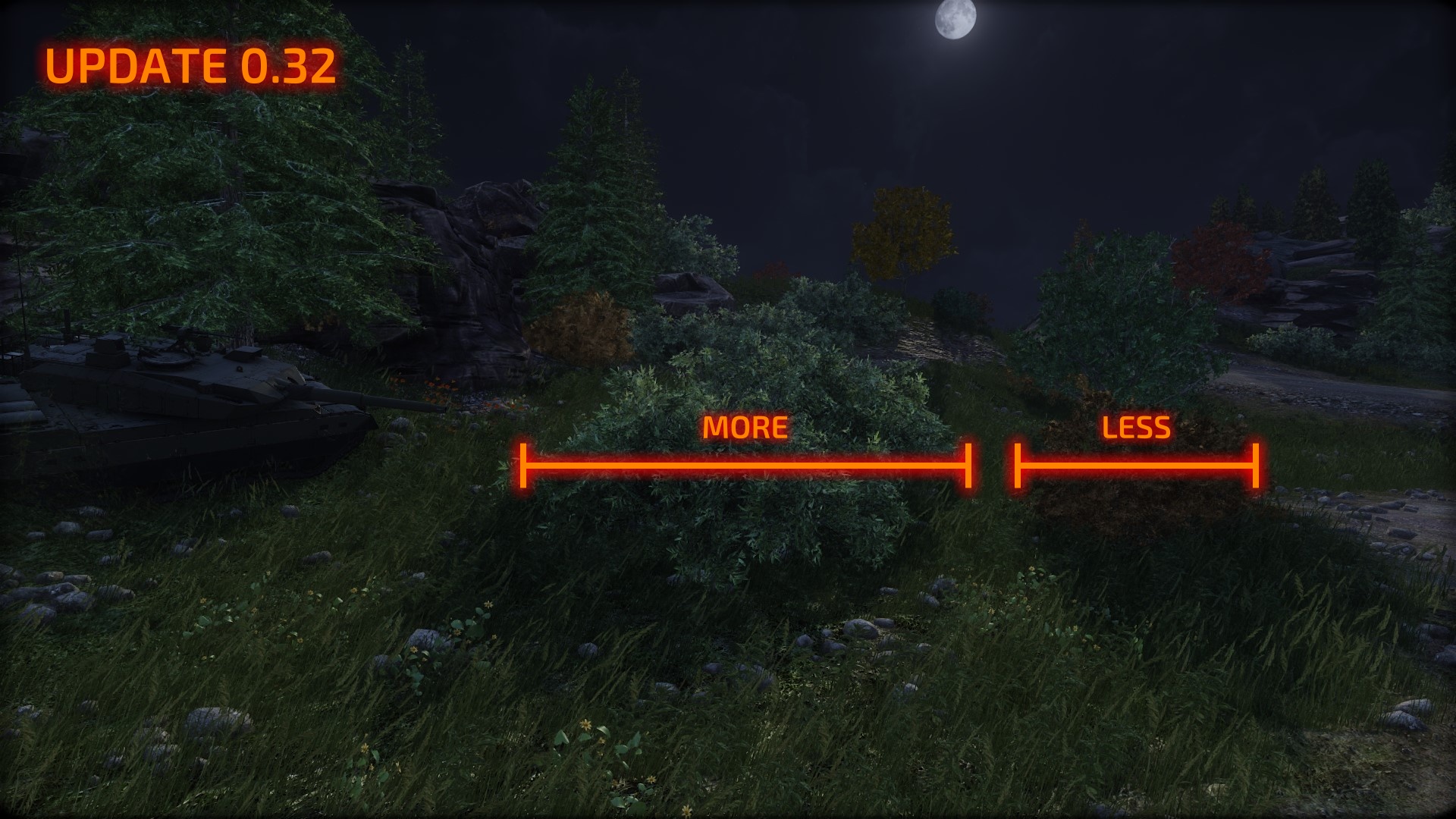 Finally, bush and canopy stacking is now a thing. Bringing a tree down so that its canopy covers an existing bush effectively doubles that area’s cover camouflage bonus, although only two such bonuses will stack at most and further canopies brought down to the same area this way will not increase your camouflage bonus at all.

We hope that you’ll enjoy these changes and, as always: