Since the days of the Vietnam War until the mid-1990s, the standard American light tank was the M551 Sheridan. As light tanks go, it wasn’t the best vehicle around – in fact, from its cannon that was early on rather dangerous to use to its paper-thin armor, the vehicle is best described as mediocre. For more info about the Sheridan, please visit the following articles:

With its problematic Vietnam record, it’s no wonder that the U.S. Army started to look for replacement quite early on. 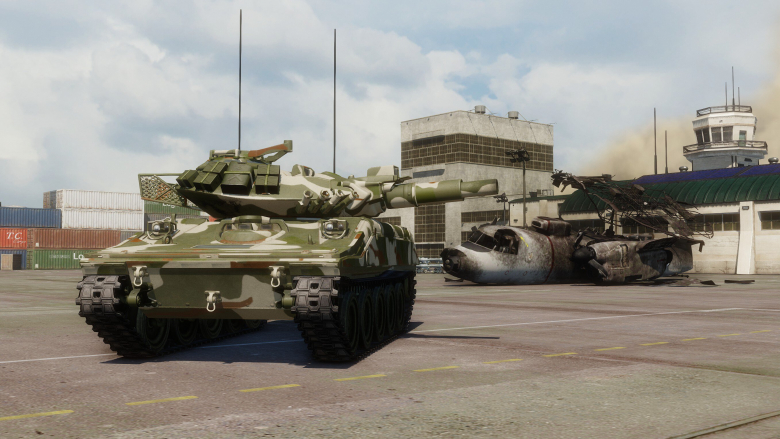 The whole problem with the Sheridan wasn’t, however, considered to be an issue inherent to that particular class of vehicles. Light Tanks still had their place on the battlefield, the Americans argued – not because anyone was keen on driving around in a tin can that could be penetrated by even relatively small caliber weapons, but because the development of modern penetrators and HEAT shells made armor obsolete anyway – the Patton series of tanks couldn’t withstand the modern Soviet weaponry (as was demonstrated by the massive Patton losses the Israelis have suffered during the Yom Kippur War in 1973) so why bother with armor anyway, might as well have some extra speed.

So instead of phasing out the Light Tank class altogether, the American armor developers started to think about improving it. The DARPA (Defense Advanced Research Projects Agency), responsible for developing cutting edge military tech, was tasked in the early 1975 with developing a high performance testbed for various technologies that could be used on such a light to medium weight tank (25 to 40 tons). The research focused on the following elements:

The development was officially launched in March 1976 under the designation HIMAG (High Mobility Agility).

The hull and suspension were developed first. The vehicle was powered by a Continental AVCR-1360 diesel that could be tuned to up to 1500 gross horsepower coupled with the Allison X-1100-1H transmission and hydro pneumatic suspension that could tilt the hull forward, backward or to the sides.

In 1977, the U.S. Army (TACOM – Tank Automotive Command) and the U.S. Marines (ACVT program) over the development from DARPA but immediately ran into issues. When the testing started in February 1978, the suspension performed really well but the gun failed due to the accuracy loss after the first shot and the loading mechanism had to be reworked to a rather complex automatic mechanism that allowed the vehicle to fire up to 60 75mm rounds per minute.

The turret that housed the 75mm gun was manned but the two crewmembers (gunner and commander) were sitting in the basket under it, protected by the hull armor from threats. This upgraded vehicle was tested in Yuma and Fort Knox between March 1980 and March 1981, after which it was dismantled and its components used elsewhere. The tests showed that, simply put:

Gun accuracy was a constant problem. The first shot accuracy was comparable to the 105mm M68 but anything over 2-round burst caused significant accuracy loss and a muzzle reference system was an absolute must. The replacement of the loading system to a more complex one didn’t help as much as had been hoped.

In the meanwhile, the Marines were doing their own thing in their search for a lightweight combat vehicle. The ACVT program produced a testbed called HSTV-L (High-Survivability Test Vehicle – Lightweight). It was loosely based on the HIMAG program but, unlike in the case of the HIMAG testbed, two private companies were asked to submit their proposals. These companies were:

The proposals were submitted in July 1977.

The AAI proposal, while innovative, had a standard turret armed with the abovementioned 75mm gun (now referred to as Ares). The turret was quite low, reducing the silhouette of the vehicle. The interesting part was that while the vehicle had a crew of three men, only the commander was located in the turret with the gunner sitting next to the driver in the hull and controlling the gun remotely. Secondary armament consisted of two machineguns and the whole vehicle was to be propelled by a Lycoming 800 gas turbine engine.

The PCF proposal, however, was something else. Instead of a standard turret, the vehicle was supposed to have a hydraulic system that would elevate the gun over obstacles. Additionally, it was supposed to carry secondary armament consisting of a 25mm Bushmaster autocannon, a machinegun and a 40mm grenade launcher. The whole contraption was powered by a Detroit Diesel engine.

After reviewing the PCF proposal and determining that the proliferation of the research of military LSD applications into the military industry was probably not a good idea, the overseeing committee chose the AAI proposal as the winner, requesting only some partial modifications to the design. A prototype was built and tested, teaching the designers many valuable lessons that would come in handy later.

The Pacific Car and Foundry Company would eventually show up again with its elevating turret design, promoting it and lobbying, which resulted in a contract to produce a demonstrator of such a turret based on a Sheridan hull in 1982. The prototype (designation ELKE – Elevated Kinetic Energy) was indeed actually built and tested in Yuma. Like before, the program didn’t really go anywhere but served as a demonstration for the elevated turret principle that was, if nothing else, entertaining to watch (whether the taxpayers agreed on that point was, however, another matter entirely). 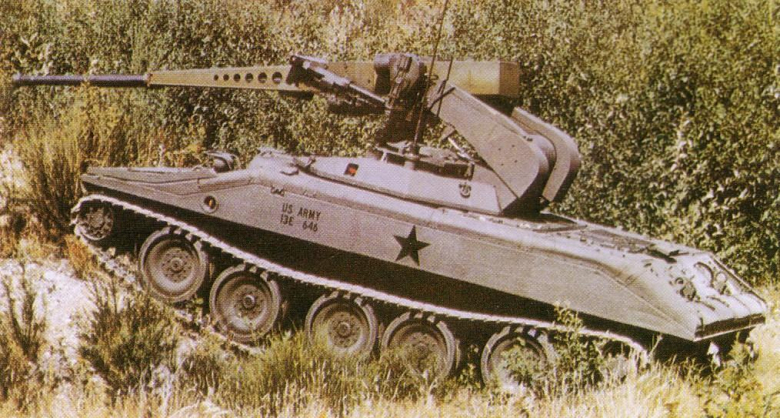 For AAI, the lessons learned during the development of their HSTV-L prototype resulted in the creation of a new Light Tank prototype in 1980. This vehicle was called Rapid Deployment Force Light Tank, abbreviated to RDF/LT.

AAI developed this tank in hope of further participation in the U.S. Marine AVCT program. The Marines needed something fast with a lot of firepower but at the same time light enough to be transported using a sling under a CH-53 helicopter – this meant not only size restriction, but, most importantly, the maximum weight was limited to approximately 16 tons.

The prototype AAI produced was armed once again with the 75mm Ares cannon (now designated XM274). The gun was still as impressive as it was when it first reached the development stage. It was automatically loaded and had the rate of fire of 60 rounds per minute. It was also fully stabilized and capable of elevating to +40 degrees. The gun was operated by a gunner sitting in the hull next to the driver while the commander sat in the turret basket further to the back. A second turret variant also existed – the alternative turret was unmanned (reducing the crew to two men) and the gun was basically externally mounted. Finally, there was a turret variant featuring eight anti-aircraft missiles.

To keep the weight low, the vehicle was built entirely from aluminum. This fact allowed it to fit within the required limit with its combat weight of 14.8 tons but at the same time assured that anything worse than spits and angry glances would penetrate the armor – the front was at least heavily sloped. Unlike the HSTV-L, the RDF/LT was powered by a conventional Detroit Diesel 6V53T turbodiesel engine coupled to the Allison X-200 transmission). The suspension was also standardized – the hydro pneumatic system was replaced by torsion bars.

The vehicle could fit into a whole range of American cargo planes, from the C-130 Hercules (1 tank) over the C-141 Starlifter (2 tanks) to the massive C-5 Galaxy (as many as 8 tanks). Overall it was a viable project.

The problem with the XM274 gun was, however, that it was (as its name suggests) experimental. To introduce the vehicle to service earlier and to make it available to America’s allies (like the older light tanks were), AAI replaced the 75mm XM274 with the old and proven 76mm M32, used on the M41 Walker Bulldog. The gun itself was fairly obsolete but AAI gave it new life in the form of new 76mm APFSDS shells. These were actually far more powerful than most people think with a significantly higher chance to kill an average Soviet tank than, say, the 105mm HEAT rounds used back then by MBTs.

Regardless, despite these qualities, the Marines didn’t want it and that was the end of the RDF/LT. The end of the 1970s wasn’t really a good time for experimental projects with the funding being cut left and right as an aftermath of the lost Vietnam War. And so the Marines went for the LAV and HMMWV wheeled vehicles instead, leaving the RDF/LT in prototype stage only. The project was officially terminated in 1985.

AAI Corporation survived the setback and went on to produce more cutting edge weaponry, including small arms and drones. In 2007, more than 100 years from its original founding, it became a part of the Textron holding and exists as a division until this day, although it was technically split into three different sub-divisions in 2014. 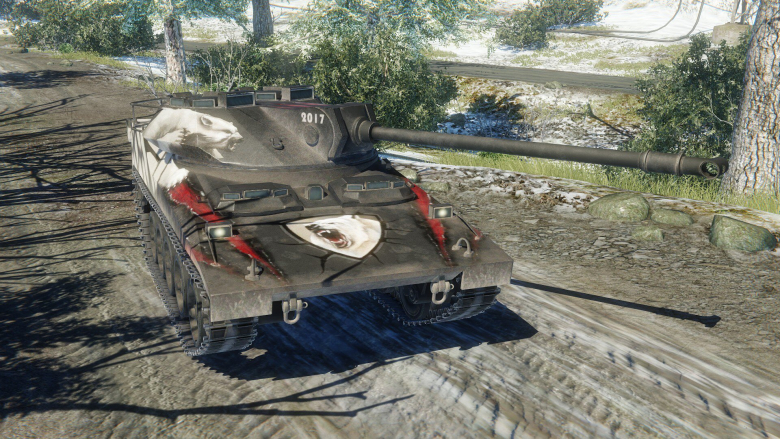 In Armored Warfare, the RDF/LT is a Tier 6 Light Tank. It was originally offered as a part of the Collector’s Edition, but it also exists as a part of the Claw vehicle edition, featuring unique camouflage and a high-level crew. The variant modeled in the game is the vehicle armed with the 76mm M32 gun as it was the closest the RDF/LT came to mass production. Its gun is quite accurate, fires fast and has a lot of penetration, but these advantages are compensated by the low damage per shot value. It is also quite fast and accelerates well but isn’t perhaps as nimble as other Light Tanks of its Tier.

We hope you enjoy playing it and will see you on the battlefield!