The road to the current state of armored vehicles was a long one, encompassing nearly 100 years of armor development. Some concepts proved to be successful and evolved further and further – such was for example the development of the medium tank that gradually changed into today’s main battle tank.

With such a rapid development of course came errors – entire classes of armor that eventually proved to be the proverbial “dead end” and in time disappeared altogether. In today’s article, we’ll have a look at some of those vehicles now practically extinct. 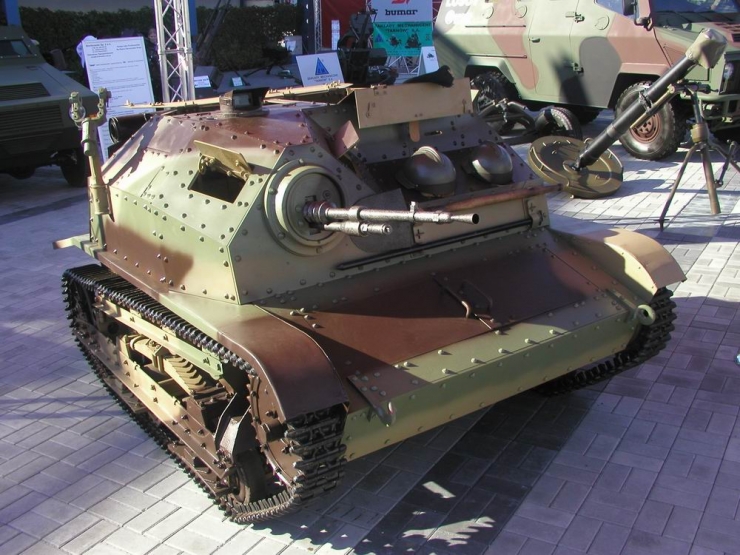 One of the first “blind branches” of development ever to appear (and go extinct) was the tankette. Tankettes were the “flavor of the year” in mid-twenties and at one point they became very popular amongst pretty much all the advanced armies in the world. A tankette (as its name suggests) is a small version of a tank. It is a one-man or two-man tiny tracked vehicle, often equipped with only a single machinegun. In theory, they were to be used for multiple purposes – from being simply a somewhat-armored mobile machinegun nest to (in extreme cases) actually knocking out tanks. Tankettes were invariably very poorly armored, usually not protecting their crews even from small arms fire, let alone heavy machineguns or artillery shells. Their mobility was poor to average (depending on the model) but their use was almost always very limited. Tankettes were vulnerable, generally too slow and poorly equipped to be any good in reconnaissance role and not armed enough to take on any serious opponent without putting their crews in mortal danger. Their main (and mostly only) advantage was that they were extremely cheap and could be produced in massive quantities. They were used by the British army, Czechoslovak army (the infamous Tančík vz.33), Polish army (multiple designs) and the Soviets, although the French had their tankettes as well and the German Panzer I was more of a tankette than a real light tank. Nevertheless, despite their flaws, tankettes generally survived until the early stages of the war, during which they were widely considered to be obsolete and were used for training, although the Polish managed to use their advanced tankette models against the invading Germans with relatively good results.

The idea behind the wheel-cum-track designs was that while the tanks have excellent off-road capabilities with their tracks, they are not very fast on the hard roads and the tracks wear down quickly when used extensively on hard surfaces. On the other hand, armored cars had excellent road capabilities but could hardly compete with tanks off the road. Multiple designers considered how to solve this situation and two major “branches” appeared in the twenties and thirties.

First type of basically had two suspensions on one vehicle – a tracked one and one with wheels. If the crew wanted to use the wheel suspension, they usually had to “lift” the vehicle and make it stand on the wheels manually. Once the vehicle was lifted, it could use the wheels to move very fast on the roads. This conversion usually took anywhere between ten minutes and half an hour and generally could not be performed under fire. Furthermore, the system was almost always very complicated, expensive to manufacture and difficult to repair while its usefulness was limited. Most armies got rid of any such projects very early on, although some vehicles with such a suspension (such as the Saurer RR7) were actually used throughout the war. Second type is closely associated with John Walter Christie, an American inventor. Christie designed series of rather unsuccessful tanks that had one main feature: they were extremely fast (usually at the cost of armor and armament). His best-known invention, the suspension named after him, was used mostly in Soviet tanks (the BT series and the T-34) and some earlier British cruisers. One of the early features of this suspension – specifically on the BT tanks – was that the tracks could be removed and the tank would then only use roadwheels to drive around. Such converted tanks were very fast but the solution was complicated and was abandoned in favor of vehicles with tracks only.

Wheel-cum-track projects mostly disappeared before World War Two or in its early stages. Overcomplicated solutions never thrived during wartime and this type of vehicles would be a prime example. Whenever “superheavies” are mentioned, most people usually imagine the gigantic German monstrosities such as the Maus. The truth is however that most advanced nations developed this class of vehicle before the war or during it – the Americans with their T28 GMC, the Germans with the aforementioned Maus but also the French, the Japanese and the Soviets. Apart from the Germans whose development was fuelled by Hitler’s megalomania, most developers quickly found out that mass-producing such vehicles would – despite their obvious power – be rather pointless. For one, superheavy vehicles were extremely expensive and consumed large quantities of fuel. Their slow speed and size would make them very vulnerable to artillery and air strikes as well but possibly the biggest issue was the one of logistics. Even classic heavy tanks were problematic logistically – transporting them to the front was often a challenge due to the common railroad constraints. Transporting superheavy tanks however was practically impossible – there were no rail wagons to hold them, there were no truck trailers to carry them and there were – especially in the less developed parts of the front – no bridges that could support their weight. Although this problem sparked some innovative solutions (such as the dual Maus snorkel system), this class of vehicles went extinct after the end of the war as everyone realized it’s simply not worth it and focused on larger amounts of more practical medium tanks instead.

Late war and post-war heavy tanks were partially in the same situation. The Americans quickly realized that producing a third class of tank was logistically not worth it – they built limited numbers of the M103 heavy tank in the 50’s and then stopped producing heavy tanks altogether. The Soviets took a while longer and continued to develop and modernize the IS tank series, culminating with the T-10 heavy tank that was produced until 1966. The rapid arms development and the fact that medium tanks could handle the same tasks just as well (but for lower price) however finally retired the heavies. It could be argued that while the development of heavy tanks was discontinued, the concept never really died, it rather blended with the medium tank to produce the main battle tank weight category. The main battle tanks of today – with full complement of additional equipment and ERA – easily reach the weight categories of the heavy tanks of old (60 tons or even more) and the current development is starting to face much the same issues as the designers of the heavy tanks faced (logistics, armor protection versus weight increase), often producing interesting and unorthodox solutions for the future.