In Armored Warfare, the BMD-4 is a Tier 6 Armored Fighting Vehicle. It does deserve an article of its own, but to talk about the BMD-4 in our Vehicles in Focus series, we first have to talk about its predecessor, the BMD-3.

The BMD-3 is currently not available in the game, but it is possible that it will appear as a separate vehicle in the future. Without further ado – let’s start! 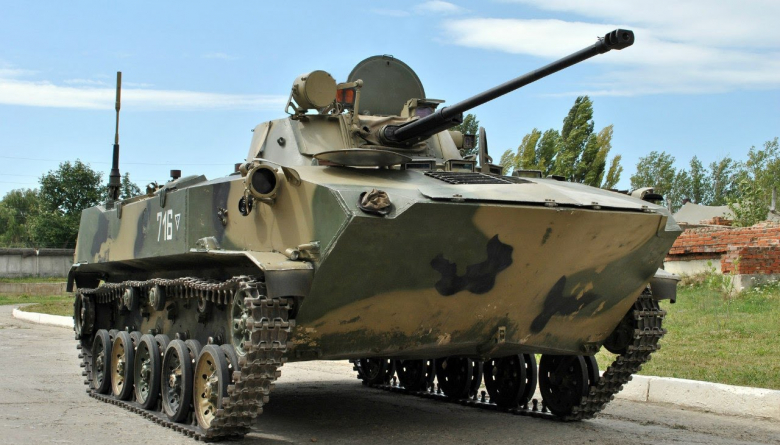 By the end of the 1970s, it was clear to pretty much everyone that the upgrade potential of the BMD-1 platform was spent. Of course, it was possible to change the armament, which happened in the 1980s with the BMD-2, switching the older 73mm Grom cannon for a more modern 30mm 2A42 autocannon capable of engaging even flying targets. It was also possible to upgrade the existing weapon system to a new model, like it happened with the BMD-2’s missile launcher in the BMD-2M variant. The problem, however, was the hull itself.

It was basically too small and too thin-armored to produce any meaningful upgrades. The inside was cramped and it wasn’t really possible to switch the turret for a bigger one, allowing the designers to introduce more powerful weapon systems to the platform beyond the abovementioned 30mm autocannon. Something else was needed – an entirely new platform.

But there was a long way to that goal, a way that wound all the way back to 1976 and the research project called “Basnya” – yet another attempt to create a unified IFV for both the regular infantry and the airborne, which would become the future BMP-2.

Like the previous attempts, it failed once again – the airborne requirements regarding the vehicle’s weight and the ability to airdrop the vehicle were simply incompatible with the protection levels required by the the land forces – but the initiative eventually resulted a decade later in the adoption of the same weapon system (the 30mm 2A42 cannon) on the BMD-1 chassis – the BMD-2.

The development of the BMD-2 was accelerated by the Soviet-Afghan War and was actually extremely fast (it took only 6 months) – the biggest concern regarding the installation of the 30mm 2A42 gun was actually the weight increase that was expected to reduce the chassis reliability, but the Soviet engineers managed to handle that problem rather well and the re-armed vehicle was actually used since 1983 (even before its official adoption by the military).

Any further firepower upgrades would, however, run into the abovementioned size and weight issues – the upgrade potential of the chassis was thus spent, but the airborne required even more mobile firepower.

In the early 1980s, series of requirements for an IFV of the future (any IFV that is, not an airborne one specifically) were issued out to the following three major armored vehicle producers:

They, amongst many other things, defined the future armament of a new IFV as:

Such a weapon system (already developed by that time by the Instrument Design Bureau in Tula) would significantly enhance the firepower of any Soviet IFV compared to the previous versions. It’s worth noting that other options (such as a 45mm autocannon or even a 76mm cannon) were considered as well, but the “100+30” solution was found to be the most promising one.

Once again, an attempt was made to design a unified vehicle for the airborne and the land forces based on the abovementioned firepower solution. Additional requirements included high mobility and significantly improved armor protection compared to the previous IFVs (the BMP-1 and BMP-2, let alone the BMDs). The research project was designated “Basnya-2” and KMZ was tasked with its execution.

Needless to say, this entire endeavor raised some serious questions when it came to meeting the demands of the VDV (Russian airborne troops). They remembered well how the unified IFV project ended the last time around and this time it did not look very promising either.

To meet the improved protection requirements set by GBTU (Main Directorate of Armored Forces of the Soviet Ministry of Defense), the vehicle had to weigh more than 18 tons, which was the limit, beyond which it couldn’t be air-dropped using parachutes. The development of new air-drop devices was underway, but it did not end until 1986 and by then the situation was very different already.

The conflict between the airborne forces and the army escalated in autumn 1981 during a meeting between the commander of the VDV, Colonel-general D.S.Sukhorukov and the commander of the GBTU, Colonel-general Yu.M.Potapov. During the meeting, Sukhorukov expressed hope that he’d get a dedicated light IFV along with an entire family of light vehicles for his airborne forces, all built by KMZ.

As a response, Potapov went on what can only be described as a rant, telling Sukhorukov that he would get no such thing and that Sukhorukov should consider himself lucky to get at least a regular IFV, a command version and, if things go really well, an ARV, because KMZ would be busy building IFVs for the regular forces. 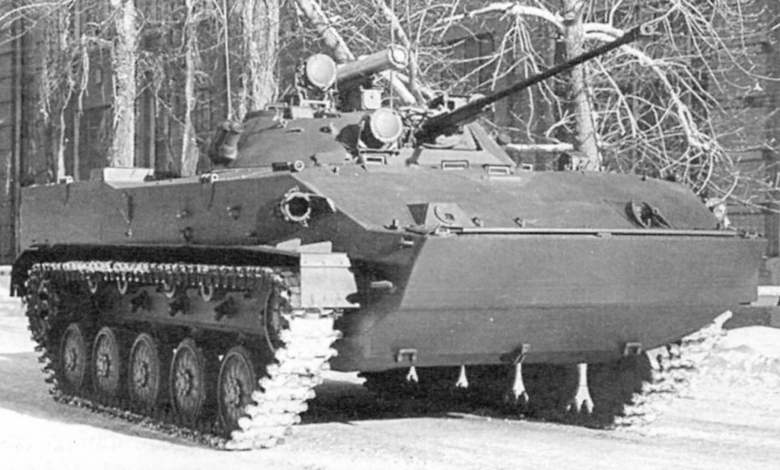 Sukhorukov was not amused at this reaction and tried to escalate the matter to his superiors, including Marshal V.I.Petrov, but they all supported Potapov. Sukhorukov left the meeting angry (to put it mildly) and after his return to the office and some yelling at his subordinates, all the resources of the VDV command were diverted towards getting a new IFV for the airborne troops approved. After many meetings and a lot of arguing, the airborne was finally successful and the work on a new IFV began.

The requirements for the new vehicle included the following points:

At the same time there were still very loud opponents to this new airborne IFV, including Marshal Petrov himself and, of course, Potapov, who himself served in the airborne for a time and felt that he knew just as well as the airborne commander what the airborne forces actually needed. The biggest arguments against this new vehicle were that:

KMZ and VgTZ along with several other development organizations of the Soviet Ministry of Defense were tasked with finding an answer to these questions. The result of this fact-finding process was that:

Petrov and Potapov were still not convinced but with these arguments presented to the Ministry of Defense, the development proceeded further although especially the hostility of Potapov would make the life of the designers and producers quite difficult.

Regardless, the project continued. The formal approval came in the form of the Resolution of the Central Committee of the Soviet Union Communist Party and the Council of Ministers No.451-159 on May 20 1983, committing to the development of the future airborne IFV for the 1990s. The development program received a code word “Bakhcha” and the GABTU designation Object 950. Volgograd Tractor Plant was selected as the developer of the vehicle, although other technical specialists and VDV experts were consulted during the development phase as well. The first technical drafts were ready in June 1983, a month after the approval. While unusually fast, the development was, however, not without its pitfalls. 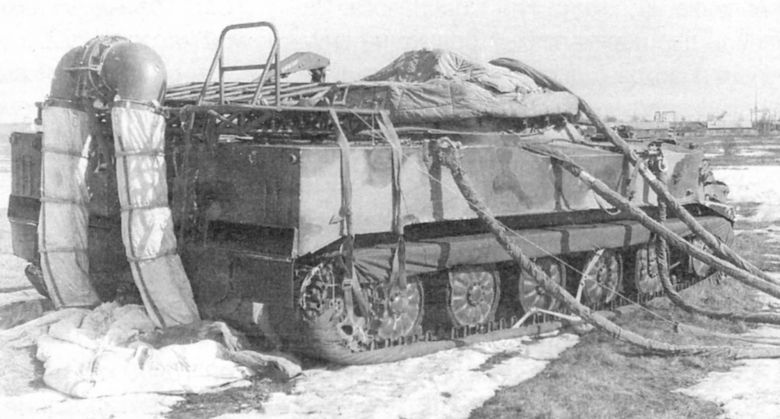 One of the most important elements of the development was the engine selection. The 2V-06 engine, developed in Chelyabinsk, was selected as the most promising one. Its own development was, however, problematic – it was an advanced 6-cylinder opposed-piston diesel engine that was supposed to be very small and light to fit into BMD and BMP vehicles. However, the early development was hindered by the lack of iron-casting technology that had to be purchased (for 3 million USD) from the United States. Without it, the engine would be too heavy.

This engine was also considered for the new BMP (BMP-3), but lost the competition to the UTD-29 diesel by Barnaultransmash, partially due to the delays in 2V-06’s development but mostly because it was found to be more suitable for the BMP series. Despite this setback and the abovementioned delays, the 2V-06 stayed as the engine of choice for the “Bakhcha” program and eventually, around 1985, managed to overcome its teething problems.

The Object 950 was armed with the same weapon system as the BMP-2 – a 30mm 2A42 autocannon with a coaxial 7.62mm machinegun. The crew consisted of two men and the vehicle could carry five troopers, the same as the previous BMD versions, making the vehicle’s introduction to VDV service all that much easier.

The hull was made of aluminum and was designed to provide enough protection to shield the vehicle from 12.7mm machinegun bullets from the front and the sides. This requirement was based on the Afghanistan experience. Despite this protection improvement, the vehicle was still small and light enough for three to fit inside the IL-76M cargo plane, as originally required.

Overall, the Object 950 was a really good vehicle – it just had one fatal flaw: it had to be approved by the GBTU and the head of GBTU was Colonel-general Yu.M.Potapov, who immediately cancelled the entire program without any discussions.

To say that the airborne command was angry was an understatement. A number of protests were filed and this time many influential people and organizations were on the side of the VDV. After months of arguing, a decision was finally taken by the Soviet Ministry of Defense to establish a special committee that would visit the Volgograd Tractor Plant and evaluate the true progress and performance of the Object 950. This visit happened in November 1983.

Something's Wrong with this Tank...