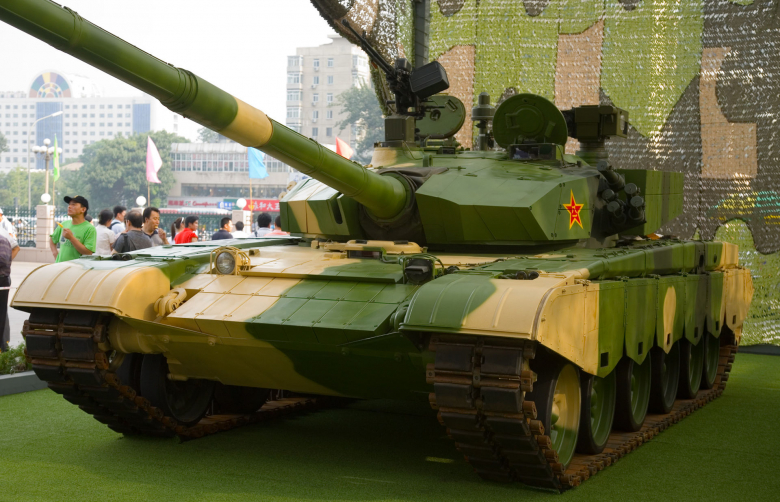 As is common with many Asian vehicles (the Chinese in particular), there is very little official information and much of what we know is based on various estimates from military analysts working for reputable sources.

The general consensus is that the production variant of the Type 99 MBT was developed from the Type 99 prototype as China's first true third generation MBT. The prototype tank (often – incorrectly – labeled as Type 98) was first shown in public on the Chinese National Day military parade on October 1 1999. The prototype and production Type 99 both abandon the Soviet concept of tanks in favor of more western technology, even though traces of Russian designs can be found deep inside the vehicle.

The hull is low and generally typical of Chinese tanks but, unlike the previous Chinese MBTs, the turret is welded. The vehicle is protected by composite armor and by an advanced spaced armor kit and ERA (allegedly comparable to Russian Relikt), resulting in an estimated frontal protection on par with the newer variants of the Russian T-90 MBT (roughly 1000-1200mm of RHAe versus HEAT rounds).

Type 99 is equipped with a JD-3 laser system that allows it to send high intensity laser bursts (dazzling) at targets that are using their own lasers to target the Type 99 MBT. The desired effect of this is the damaging of enemy optics and temporary blindness of the enemy gunner.

The main armament is the automatically loaded fully stabilized Chinese 125mm ZPT-98 smoothbore gun, capable of firing 9M119M Invar and 9M119M1 Invar-M missiles (the often-cited Refleks designation belongs to the launching system, not the missiles themselves) along with other standard former Warsaw Pact 125mm ammunition. Some sources claim the gun is a license-produced version of the Russian 2A46M, but that is not the case – the gun is longer.

The effective rate of fire is around 8 rounds per minute. The Fire Control System is indigenous and – allegedly – highly accurate, although how exactly it fares compared to other contemporary systems is not known.

The vehicle is powered by a 1200 horsepower 150HB diesel, giving it decent mobility (the maximum speed of 80 km/h, cited by Wikipedia, is, however, speculative). The acceleration is said to be very good as well thanks to its power-to-weight ratio of approximately 23 hp/t (the vehicle weighs around 52 tons).

Performance-wise, Type 99 should be on par with other third generation tanks such as the T-90 or Abrams, but it has never participated in any armed conflict and therefore it's very difficult to evaluate its performance. Some Chinese sources are known for notoriously overestimating domestic tanks to the point of absurdity and the only lead the public has to Chinese vehicle performance beyond the truly obsolete types participating in Middle-Eastern wars is the Chinese participation in Tank Biathlon.

In Chinese service, approximately 700-800 Type 99s of several variants have been built since 2001 and production seems to continue still. It is, however, unlikely that this particular vehicle will ever be exported and various speculations about export deals to Pakistan and other countries that can be found on the internet are almost certainly false. Other advanced Chinese vehicles, such as the VT-4, are, however, available for export.

In Armored Warfare, Type 99 will, as mentioned above, fill one of the high Tier gaps of the Zhang Feng military line after the release of Update 0.19.