The KTO Rosomak is the current standard wheeled infantry fighting vehicle of the Polish military. The KTO designation stands for Kołowy Transporter Opancerzony (wheeled armored carrier), while Rosomak means wolverine in Polish. The name was chosen after a poll in the Nowa Technika Wojskowa military magazine. 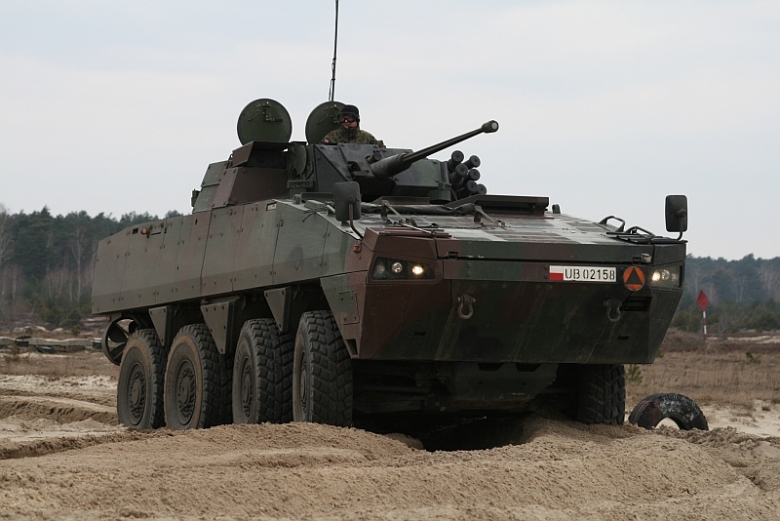 It was selected as the winner of a contest for the future Polish IFV in December 2002, defeating two competitors in the process – the Pandur II IFV by Steyr-Daimler-Puch (Austria) and the Piranha IIIC by MOWAG (Switzerland).

The Rosomak is essentially a modified Finnish Patria Armored Modular Vehicle (AMV), also known as the XC-360. The XC-360 has its roots in the Sisu Defence XA-180 APC, which in turn was developed in the early 1980s to replace the Soviet BTR-60PB in Finnish service. 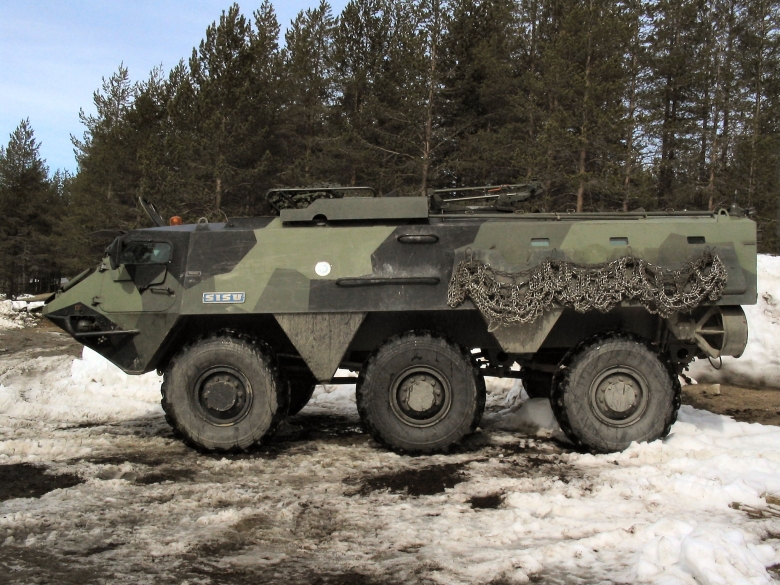 The first XA-180 prototype was delivered in December 1983 and the vehicles were already being actively used by the Finnish military in 1984 as part of the United Nations Peacekeepers contingent, sent to the contested region of Golan Heights in northern Israel. Sisu Defence Oy and four other companies merged together in 1997 into the Patria Public Limited Company and the Sisu armored vehicles were developed further under the Patria brand.

The XC-360 was conceived as a replacement for the excellent but aging XA-180. The first requirements for the replacement Finnish IFV were issued in 1999 with special emphasis on the modular nature of the vehicle. In short, the next Finnish IFV was to be as customizable as possible, ideally under field conditions. Additional requirements included as few energy emissions as possible in order to improve the vehicle’s ability to stay hidden. The first mock-up was built in 2000 and the first prototype of the vehicle was introduced in 2001. Meanwhile, the Polish government was starting to look for a replacement for its aging fleet of OT-64s and BWP-1s. 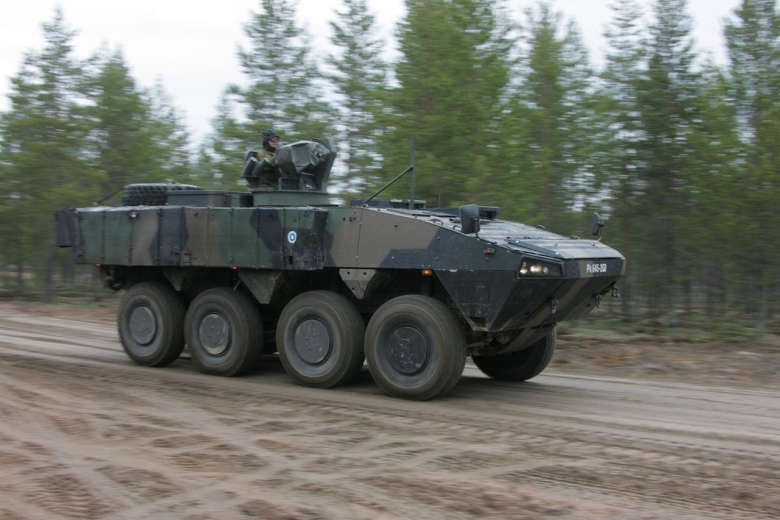 Polish plans to introduce new armored fighting vehicles were not really a new thing at that point. The standard OT-64 SKOT variants had been withdrawn from service more than half a decade earlier, leaving only specialized platforms, such as mobile workshops, still active. At that point, the initial idea had been to only purchase a small number of modern vehicles for missions abroad only (for example for UN peacekeeping operations). This idea then grew into a plan to replace all APCs with modern vehicles. Armament demands also changed from machinegun only to a fully-armed IFV variant as well as an APC.

The trial XC-360 arrived in Poland on May 20 2002. It was initially delivered without the Delco turret, which was to be installed in Siemianowice Śląskie, Poland, by WZM (Wojskowe Zakłady Mechaniczne, the official local Patria partner). The turret was armed with an American 25mm M242 Bushmaster autocannon. 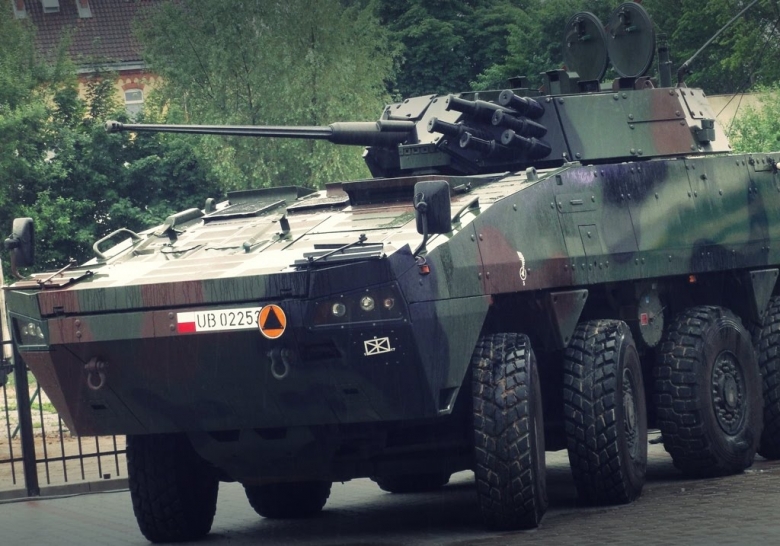 The vehicle was introduced to Polish Army staff and to members of the press two days later, on May 22 2002, and from May 24 2002, firing trials took place using two different turrets (the Delco-25 and the OTO Melara Hitfist-25 turret). The prototype drove more than 2700 km during the trials, after which it was brought back to Finland for installation of amphibious equipment. It returned to Poland in September and was shown to the public during the MSPO 2002 expo, this time with a PML 127 OWS unmanned weapons station installed. Later that month, the prototype was taken to the Sulejówek proving grounds for more trials (the amphibious part).

Patria managed to finish building the second prototype by the end of 2002. All in all, the trials went well and, on December 20 2002, the Polish Ministry of Defense committee responsible for the IFV contest decided that Patria would be the official wheeled armored transport supplier for the Polish military. A contract for 690 vehicles to be delivered between 2004 and 2013 was signed on April 15 2003. It was a general contract and the specifics of the vehicle had not yet been hammered out in detail. The Polish configuration of the XC-360, designated XC-360P, would come later since the Polish demanded a number of changes to the original Finnish XC-360. The contract for the Patria was also closed with licensed production in Poland specifically in mind – the majority of the vehicles were to be produced in Poland to maximize the positive effect on the Polish economy.

Weight reduction was the most significant change demand. The original XC-360 weighed approximately 26 tons – this had to be reduced to approximately 22 tons to make the vehicle transportable by NATO C-130 Hercules transport planes and to improve the vehicle's amphibious characteristics. The armor was made thinner to reduce the weight. Protection was reduced from STANAG 4569 Level 6 (resistant to 30mm APFSDS or AP at 500m) to Level 4 (resistant to 14.5×114mm AP at 200m) and the fuel tanks were made smaller. Vehicle width also had to be reduced by 70mm and the rear door had to be changed from the standard hydraulic ramp to a standard two-wing door. On the other hand, the XC-360P is 80mm taller compared to the original.

The XC-360P production vehicle prototype (designation PS-0) with the abovementioned changes was ready in 2004 and on May 31 2004, the two first mass-production vehicles (designation PL-1 and PL-2, built in Finland) reached the port of Gdynia. From there they were transported to the Siemianowice Śląskie factory where the final assembly took place. A single OTO Melara Hitfist-30P turret was mounted on the PL-1 chassis and both vehicles were tested further. No additional issues were found and, on June 30 2004, both vehicles were taken to the Sulejówek proving grounds, where they were transferred to army representatives and where they received the official name Rosomak. 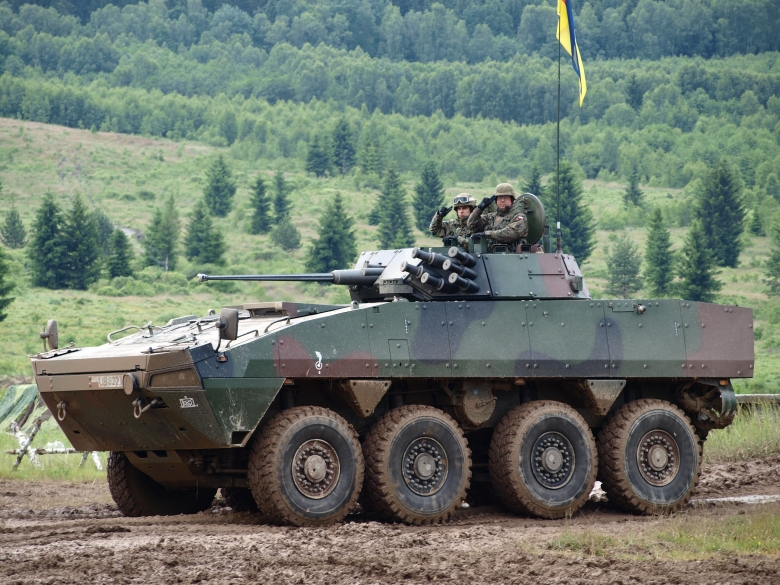 The vehicle is equipped with the Italian OTO Melara Hitfist-30P turret. It is a two-man turret, armed with the American 30mm Mk.44 Bushmaster II autocannon and a coaxial 7.62mm Polish UKM-2000C machinegun. Both weapons can be elevated to +60 degrees and depressed to -10 degrees. The turret is made of aluminum with ceramic elements and additional protection is provided by an SSP-1 Obra-3 smoke grenade launcher system. It was developed from the older Italian Hitfist-25 turret.

The most significant change is a reduction in turret height compared to the Hitfist-25 variant – this Polish demand was issued to make the vehicle fit the C-130. The turret can also be equipped with two single-tube Spike-LR Israeli ATGM launchers – the Spike missile is said to have the ability to defeat 700mm of RHAe.

The gunner sits on the right side of the vehicle, aiming the weapon systems using Kolsman DNRS-288 day/night sights, an Italian Galileo Avionica TILDE FC thermal imager and a laser rangefinder. The combat weight of the turret is 2850kg.

An assembly plant operated by Wojskowe Zakłady Mechaniczne Company was opened in Siemianowice Śląskie, while turret production and assembly was undertaken by Bumar-Łabędy in Gliwice. An order of 690 vehicles was delivered between 2002 and 2013. The license agreement between Patria and Wojskowe Zakłady Mechaniczne for Rosomak production was renewed for 10 more years in 2013, with the Ministry of Defense planning to purchase several hundred more Rosomak AFVs before December 31 2023. 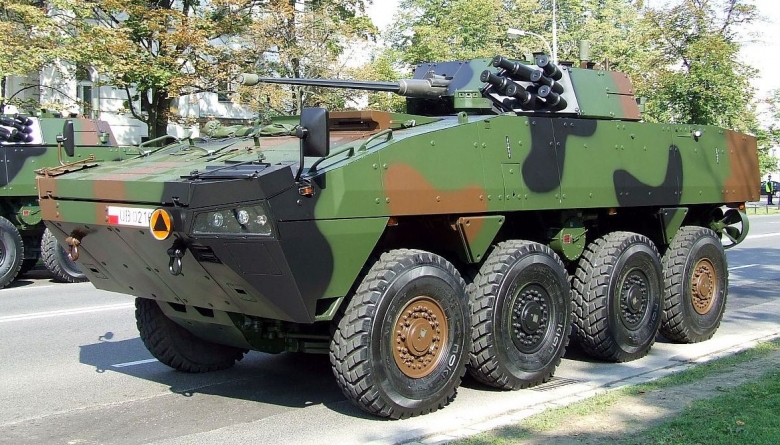 The vehicle saw service during the War in Afghanistan – around a hundred vehicles were used at one point or another by the Polish forces stationed there, some of the up-armored variant. Sixteen other vehicles were deployed with approximately 400 Polish troops during the European Union Force Chad/CAR mission in Chad. While the Chad mission went relatively peacefully, the vehicles in Afghanistan did come under fire and one Rosomak gunner was killed during an incident where the vehicle drove over a large improvised explosive and was tipped over during the explosion.

On the 10th of November, both Open Beta servers will not be available for an extended period of time in order to implement Hotfix 0.18.2810