During the second half of the Second World War, modern Soviet tanks became the nightmare of German soldiers – and rightfully so. The T-34 – widely considered to be the best tank of the Second World War along with the American Sherman – was a powerful tank in its own right and was superior to the aging Panzer III and Panzer IV designs. But even though these modern medium tanks were feared, the true terror of the battlefield was the hammer of the Soviet armored forces – the heavy tank. 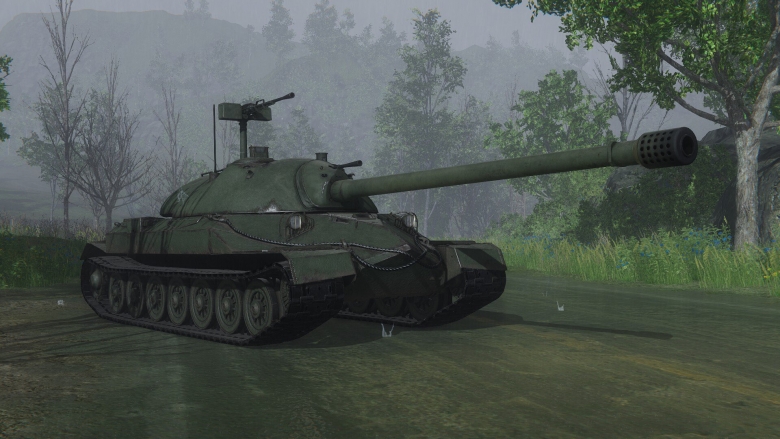 From humble multi-turret beginnings, the Soviets designed something extraordinary. The Kliment Voroshilov and Iosif Stalin series of breakthrough tanks were intended to batter even the heaviest fortifications into submission and to force their way through enemy lines with the rest of the Soviet forces following behind through the breach.

The IS and IS-2 tanks were without doubt very effective at destroying even the heaviest German mass-produced vehicles and the modern IS-3 shocked the world in 1945, but it was only after the war when the IS tank series reached its true peak in the form of the mighty IS-7. 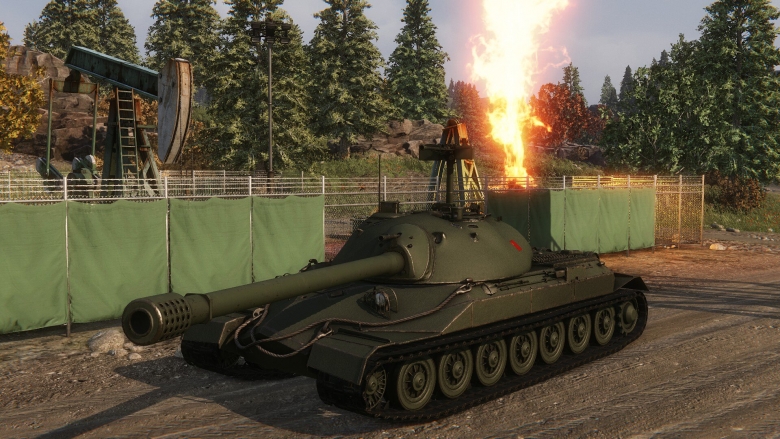 The development process that led to the IS-7 can be traced back to the summer of 1943, when the appearance of new German vehicles on the Eastern Front (especially the heavy Ferdinand tank destroyer) sparked a change in the requirements for a future Soviet heavy tank. In November 1943, these requirements called for a new 55 ton heavy tank, able to withstand everything the Germans could throw at it.

The development of a new heavy tank began at the same time in two competing design bureaus – the SKB-2 of the Kirov plant (moved to Chelyabinsk during the war) under N.L.Duchov and the No.100 plant under J.Ya.Kotin. The competition was taken very seriously.

Instead of taking the IS-2 as the base for the new tank design and simply upgrading it, the No.100 plant started to develop a new heavy tank that received the designation IS-6. The main feature of the IS-6 design was the heavy use of sloped armor. The project was kept in strict secrecy – for example, only a few select top designers from the team were allowed to access the design documents. The result, however, was not very good – the tank had issues with suspension and transmission, it was too heavy and its mobility wasn't very good either. The tank was not any better than its SKB-2 competitor from Chelyabinsk (Object 701).

The research continued. Unable to secure the support of the supervisor of the Soviet tank industry, V.A.Malyshev, Kotin turned to the feared NKVD director Lavrentiy Beria, who did throw his weight behind Kotin, allowing him to continue working on three heavy tank designs – Object 257, Object 258 and Object 259. These represented variants of the same project with the differences mostly in the engine and transmission (electrical or mechanical). All three projects were ready in early 1945.

They were solid designs, but by the time they reached Malyshev's table for approval in July 1945, the requirements for the Soviet heavy tanks changed yet again. News of the captured German superheavy tank Maus reached the Soviet tank industry, along with reports about the captured German Jagdtiger tank destroyer from Austria, where one such vehicle was captured intact. Both German vehicles were armed with the 128mm KwK 44 gun and Kotin's Objects were not sufficiently armored to withstand its fire. In addition to that, the proposed armament for the Objects was the 122mm BL-13, an interim solution at best that could only penetrate Maus at close range.

It was therefore decided to upgrade the armor of the future Soviet heavy tank to withstand the fire of the Jagdtiger gun and its armament from 122mm to 130mm, specifically the 130mm S-26 gun. However, this gun was too big to fit into the Object 257 turret. A significant redesign was needed – and so Object 260 was born. 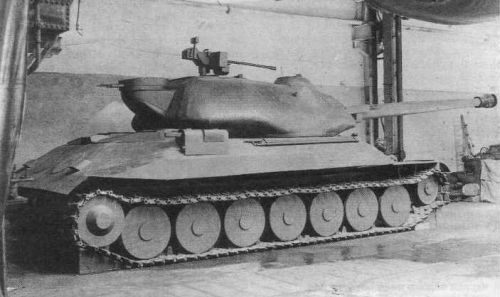 Work on Object 260 (designated IS-7), once again under J.Y.Kotin, began in the summer of 1945 in Leningrad (now St. Petersburg). Even though the war with Germany was over, the Soviets were under very strict deadlines and the first drawings of the new heavy tank were done as early as September 9 1945. The entire project eventually turned out to be quite extensive and innovative – for example, there were around 1500 drawings of the vehicle in total.

Continuing along the lines of Kotin's previous design philosophy, the vehicle had heavily sloped armor with the frontal plate split in two (the so-called pike nose) for maximum frontal protection. It was to be powered by a combination of two V-16 diesels, producing 1200hp in total while using electric transmission, which was developed earlier for the IS-6. The armament consisted of the 130mm S-26 gun, three 7.62mm machineguns and two 14.5mm machineguns. The vehicle was to weigh 65 tons, but it was rather compact despite this weight. A full-scale mock-up was built.

Work on the second variant of the Object 260 began in early 1946 and the first two prototypes were built in the second half of 1946.

The first prototype was completed on September 9 1946. It was used for suspension trials, which it passed successfully. The maximum speed reached was 60 km/h and average speed on broken terrain was approximately 32 km/h.

The second prototype was completed on December 25 1946. It too was used for suspension trials.

One of the things that plagued the IS-7 project was engine trouble. The paired V-16 diesel solution was supposed to be temporary and No.800 plant was tasked with designing and building a proper engine for the tank, but it was not delivered on time and the paired V-16 diesels that were to be delivered by plant No.77 were late as well. As a result, the first two prototypes were powered by TD-30 diesel engines (based on the ACh-300 aircraft engine), another interim solution developed by the Kirov plant along with No.500 plant. The TD-30 engine turned out to be quite good, although it did need some finishing touches. Two transmission variants were also tested – a 6-gear and an 8-gear. 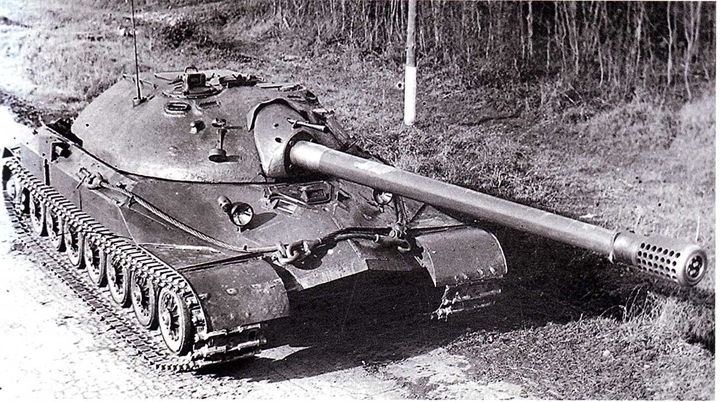 As per specifications, the vehicle was to be armed with the 130mm S-26 gun with a new muzzle brake. The gun was to be loaded with a mechanical loading assistant, allowing it to reach a very high rate of fire (for its time and caliber) of 6 to 8 rounds per minute.

Apart from the two abovementioned prototypes, built by the Kirov plant, the Izhora plant built two turrets and two hulls at the end of 1946 and in early 1947. These were used for firing trials that took place at the Kubinka proving grounds and influenced the final armor thickness values of the vehicle.

The Kirov plant designers also worked on yet another, improved, version of the IS-7 in 1947. The design was based on its 1946 predecessor, but there were some significant changes – the hull was wider and its sides were now curved and the turret was flatter. The firepower was also improved further – the vehicle now carried the 130mm S-70 L/54 gun, capable of firing a massive 33.4kg shell with a muzzle velocity of 900 m/s and controlled by an advanced - for its time - fire control system. 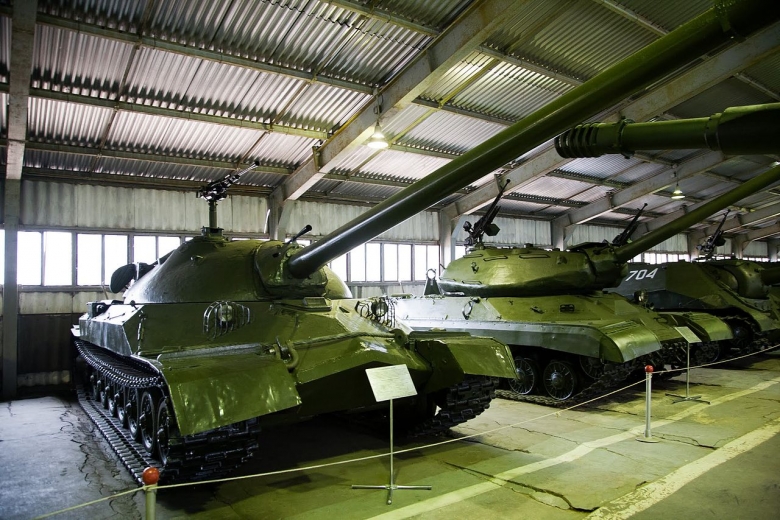 The Kirov plant built four of these improved IS-7s in the summer of 1948. All of them passed the factory trials and were transferred to the army for official state trials. The tank made quite an impression on the military committee – it weighed 68 tons, but was capable of reaching 60 km/h and had excellent off-road characteristics. The testers also noted that it was very easy to drive, unlike some of the older Soviet designs.

Its armor was practically invulnerable to tank guns of that time and could withstand not only the shots of the German 128mm KwK 44, but also those of its own gun, the S-70. There was a rather unusual test where the crew was replaced by dogs to test the effect of artillery shelling of the vehicle on its crew. The dogs were unharmed.

That is not to say that all testing went smoothly – one vehicle, for example, caught fire when the engine (at the end of its lifespan from testing) started burning and the fire suppression system did not manage to put the fire out. The crew had to leave the vehicle and it burned out.

Despite this setback and some further criticism regarding its weight, the vehicle passed the trials and the Kirov plant received an order for 50 IS-7s in 1949. What happened afterwards is still partially unclear. The order was never fulfilled – likely due to a lack of funding. Tank weight and cost were always a source of criticism and with the Soviet tank industry re-orienting itself towards cheaper medium tanks, there simply was no money left for this behemoth. In addition to that, transporting this large vehicle using the railroad was practically impossible due to the 50-55 ton limit.

In the end, no IS-7s were ever mass-produced and the only remaining vehicle is one of the 1948 prototypes, now located in Kubinka. Despite its sad ending, the IS-7 was the pinnacle of the Soviet heavy tank industry and was certainly the most powerful tank in the world in 1948 - at the time no other vehicle had the same blend of armor, firepower and mobility.

In Armored Warfare, the IS-7 will be a Tier 3 Main Battle Tank. Details on how to obtain it will be disclosed at a later date.

On the 16th of December, both Open Beta servers will not be available for an extended period of time in order to implement Update 0.18.2970!

Learn about the amazing bonuses, discounts and events for the Armored Warfare Open Beta’s first anniversary!