The second progression vehicle that will be introduced during the Update 0.31 launch, along with the already announced Type 16, will be the Harimau Light Tank. 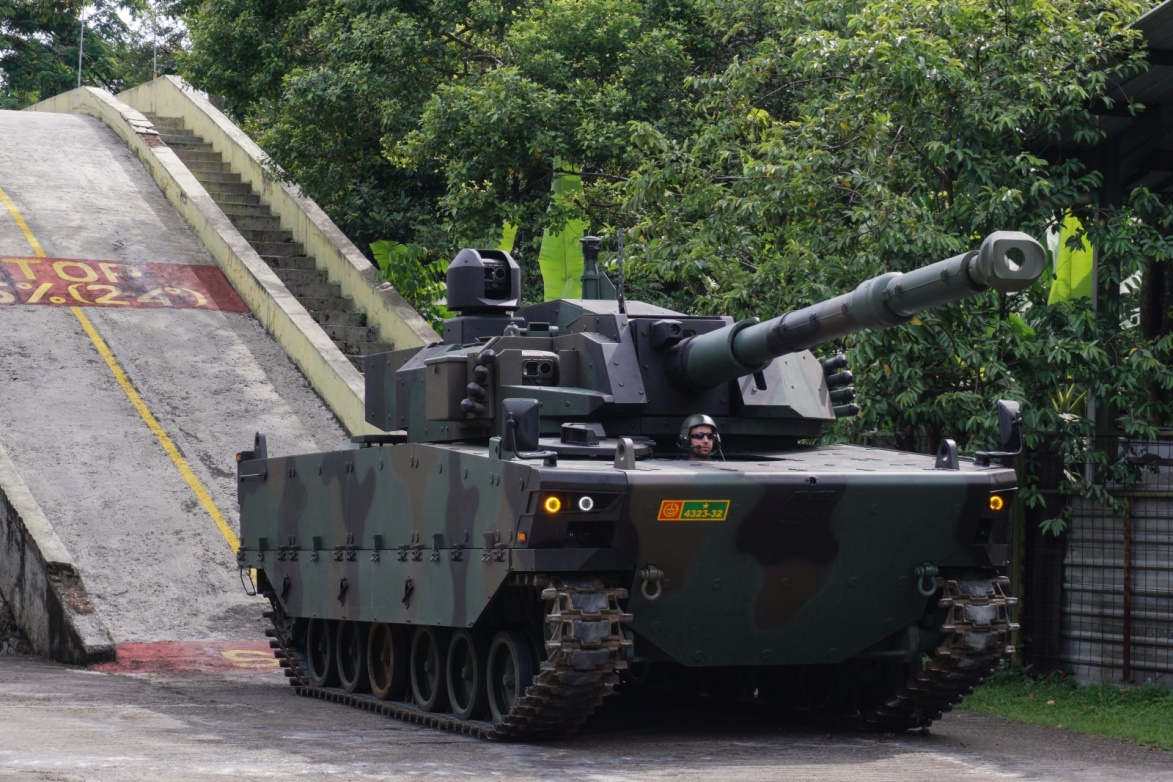 In real life, the Harimau (“Tiger” in Indonesian) is a joint project that was developed by FNSS (Turkey) and PT Pindad (Indonesia).

To understand how they got to the idea, we have to take a look at the country itself – or, more specifically, the nature of its territory. The Republic of Indonesia is a country in South-East Asia with its territories divided between five large islands including Sumatra, Java, Borneo, Sulawesi and New Guinea, as well as a number of smaller ones. It is also a tropical country – the climate there is wet and humid with some islands having mountains and the other having dense jungles or bogs. In short, it’s the worst environment you can be operating armored vehicles in.

Conversely, after its establishment, the Indonesian Military was put in front of a daunting task – to ensure the integrity of the nation. That, of course, required a lot of mobility – not only you have to somehow get through the difficult terrain, but also be able to transport your troops from one island to another. In addition to all that, the tradition of armed forces that are more on the light side was cemented by several internal rebellions, the suppression of which fell to the Indonesian troops in the 20th century.

Put that all together and you have a picture of a military force that has very little use for Main Battle Tanks. At the moment, Indonesia owns around one hundred upgraded Leopard 2 tanks (only sixty of which are truly modernized Leopard 2RI MBTs), but also more than two hundred Light Tanks, including the ubiquitous AMX-13 and the rather more exotic Scorpion 90, roughly a hundred of which were acquired from Great Britain in 1995. What that means is that even though the Indonesian military is more or less a defensive force, it uses rather modern (or, rather, old but modernized) European vehicles that were developed more for colonial or reconnaissance use than anything else.

However, as time passed, these light machines would become more and more obsolete and would be extremely vulnerable even if they were called upon to quell an internal uprising. After all, this is a scenario that becomes more and more plausible in this new decade, since various state actors may actively try to destabilize nearby countries for their own benefit – and the South China Sea is a tempting prize indeed. 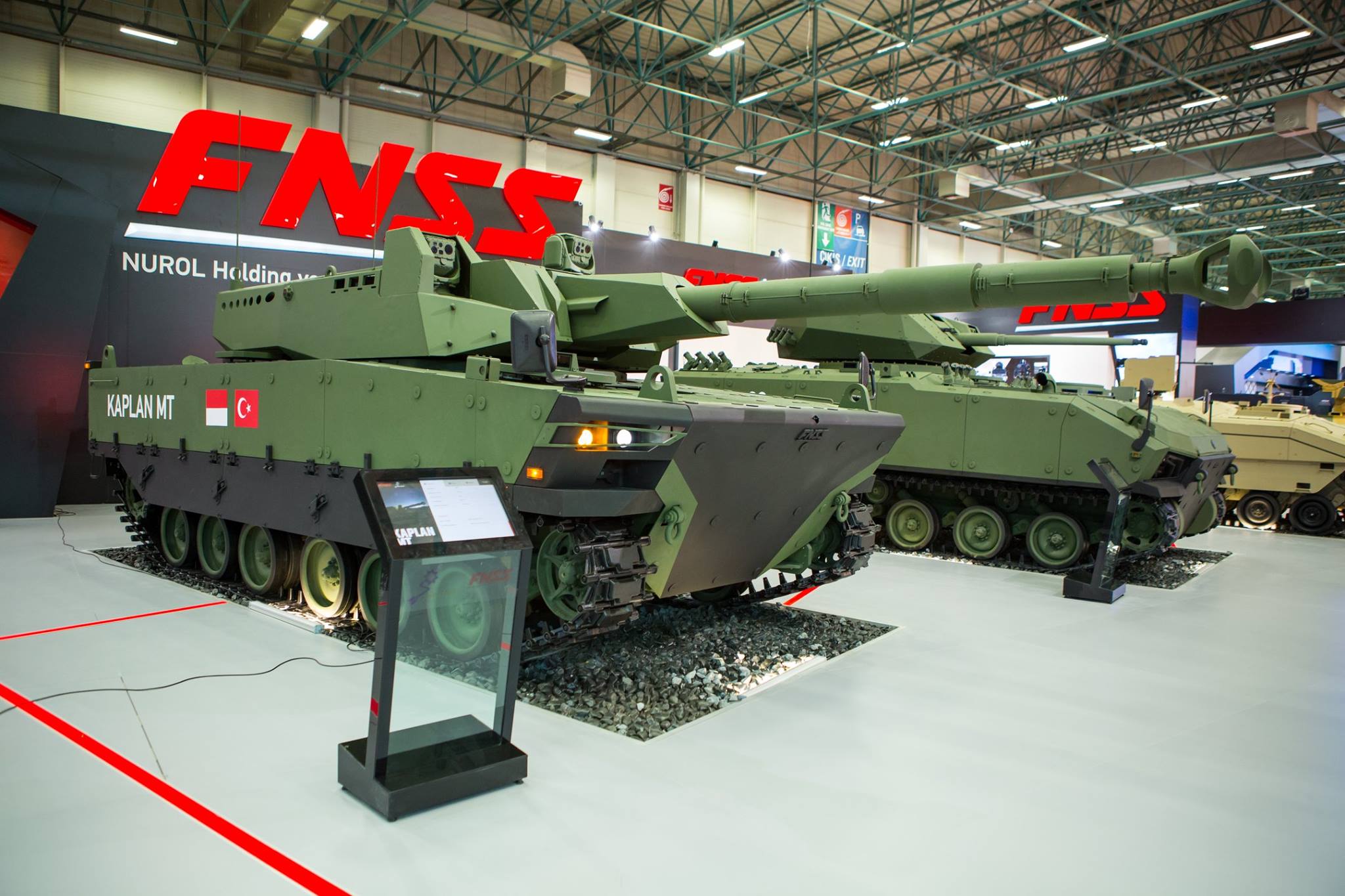 The recent conflicts have fully unveiled the vulnerability of Cold War era vehicles in asymmetric warfare and the Indonesians decided that in order to fight in such a potential war effectively, they needed something with a higher chance of survival to support their troops while, at the same time, keeping the weight low enough to make sure the vehicle would still perform well in rough terrain. Price was, of course, also a major consideration – Indonesia isn’t the richest of countries and has to have the ability to wage such a war in a cost-effective manner.

The result of this line of thought was a program called Modern Medium Weight Tank, which was launched in 2015. The brunt of the development was carried by the Turks and their own prototype of the tank is referred to as Kaplan MT.

Despite being called a “Medium Tank”, the MMWT is really more of a Light Tank than anything else. The Light Tank designation was, after all, used for other tanks of the same weight category of 30 to 35 tons (an example being the Chinese ZTQ-15 or the BAE CV90120T. The first prototype was unveiled in the early 2017 during the IDEF 2017 expo and, presumably in 2018, the vehicle was tested by the Indonesians and accepted formally in service under the name Harimau.

The Harimau weighs 32 to 35 tons (depending on configuration) and has a crew of three men (commander, driver and gunner). Its basic hull armor is made of steel composites with the protection reaching STANAG 4569 Level 4 from any angle (it can resist up to 14.5mm AP bullets at 200m). The protection level can, however, be increased to Level 5 (25mm autocannons).

The interesting part is that while the hull of the vehicle is made of steel, the turret is made of aluminum (with equal protection levels). This is due to the fact that the tank uses a commercially available Cockerill 3105 turret by John Cockerill (formerly known as CMI Defense) along with its proprietary weapons and electronics systems (some of the earlier Turkish prototypes featured a another Cockerill turret, the CT-CV one). This solution allows the producer to keep both the weight and price low.

However, the obvious downside is that this tank lacks the protection of a true MBT – you can either have low weight or a lot of armor, but not both. That is why the vehicle also features additional protection systems, including:

Additionally, the tank is highly resistant to mines (the V-shaped bottom can withstand the explosion of 10 kilos of TNT) and can be, allegedly, upgraded with the following modules:

The mobility is ensured by a rather conventional but rugged suspension along with a Caterpillar C13 12.5 liter inline 6-cylinder twin turbocharged diesel engine that is producing either 520hp or can be tuned up to 711hp (sources vary). There is also the Caterpillar Allison X300 automatic transmission. Together, they allow the Harimau to reach the speed of 70 km/h (or even more with the governor removed).

And last but not least, there’s the firepower. The Cockerill 3105 turret is armed with an automatically loaded 105mm Cockerill High Pressure rifled gun (albeit without the commercially offered Falarick ATGM firing capability).

The gun is fully stabilized and fed from a 12 round turret bustle magazine. The nominal rate of fire is 8 rounds per minute and all standard NATO 105mm rounds can be fired as well as Cockerill’s own special M1060CV APFSDS shell, capable of penetrating 560mm of armor at 60 degrees at 2km. The gun can elevate to +42 degrees and depress to -10 degrees. 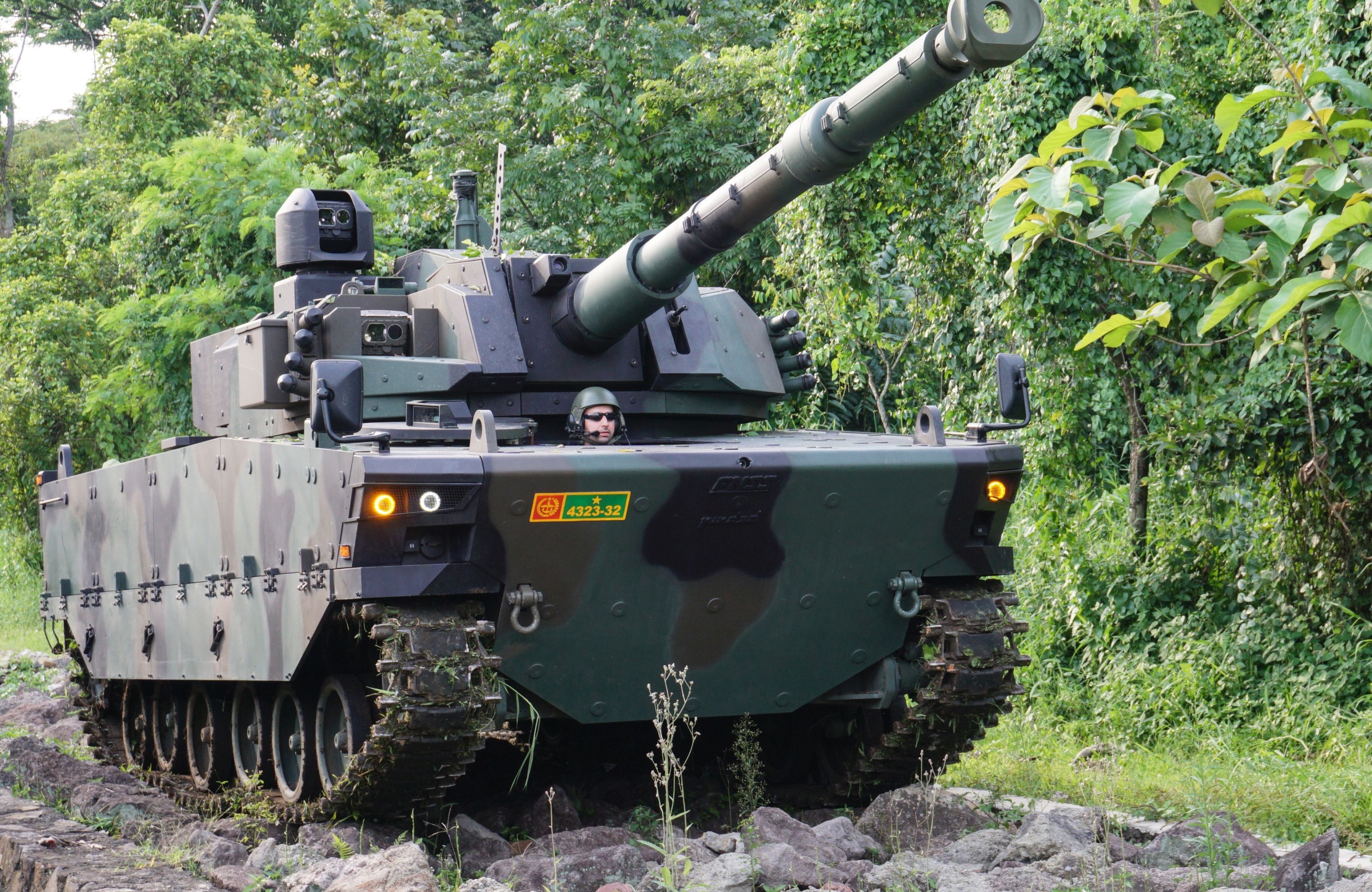 But a powerful gun is only half of success – you need to aim it accurately as well. Fortunately, the Harimau has a cutting edge Fire Control System with the hunter-killer capability as well as all sorts of high-quality optics (including thermal imagers). Additionally, the commander has the access to panoramic sights as well as a Battlefield Management System.

In summation, it’s a very capable vehicle and Indonesia allegedly already bought 18 in 2019 with more on the way. For the Indonesians, it is allegedly also quite a bargain, although it carries a different type of benefit for the Turkish side. Turkey has been trying to establish itself as an arms exporter as well as a regional power for years now. The Harimau is an important step in this endeavor, since it is the first official Turkish export contract in this prestigious category. Few nations can boast with such a feat and it seems that Turkey has entered the big boys club with this deal.

In Armored Warfare, the Harimau will be a Tier 8 progression Light Tank that will be unlockable from the Type 16 MCV Tier 7 Tank Destroyer. Both vehicles (along with the rest of the Spirithaven season vehicle line) will be added to the vehicle pool of Francine De Laroche, which already contains the French vehicles. The C13 TUA owners will therefore have the option to unlock either the Tier 7 Type 16 MCV, or the Tier 7 Leclerc Prototype. 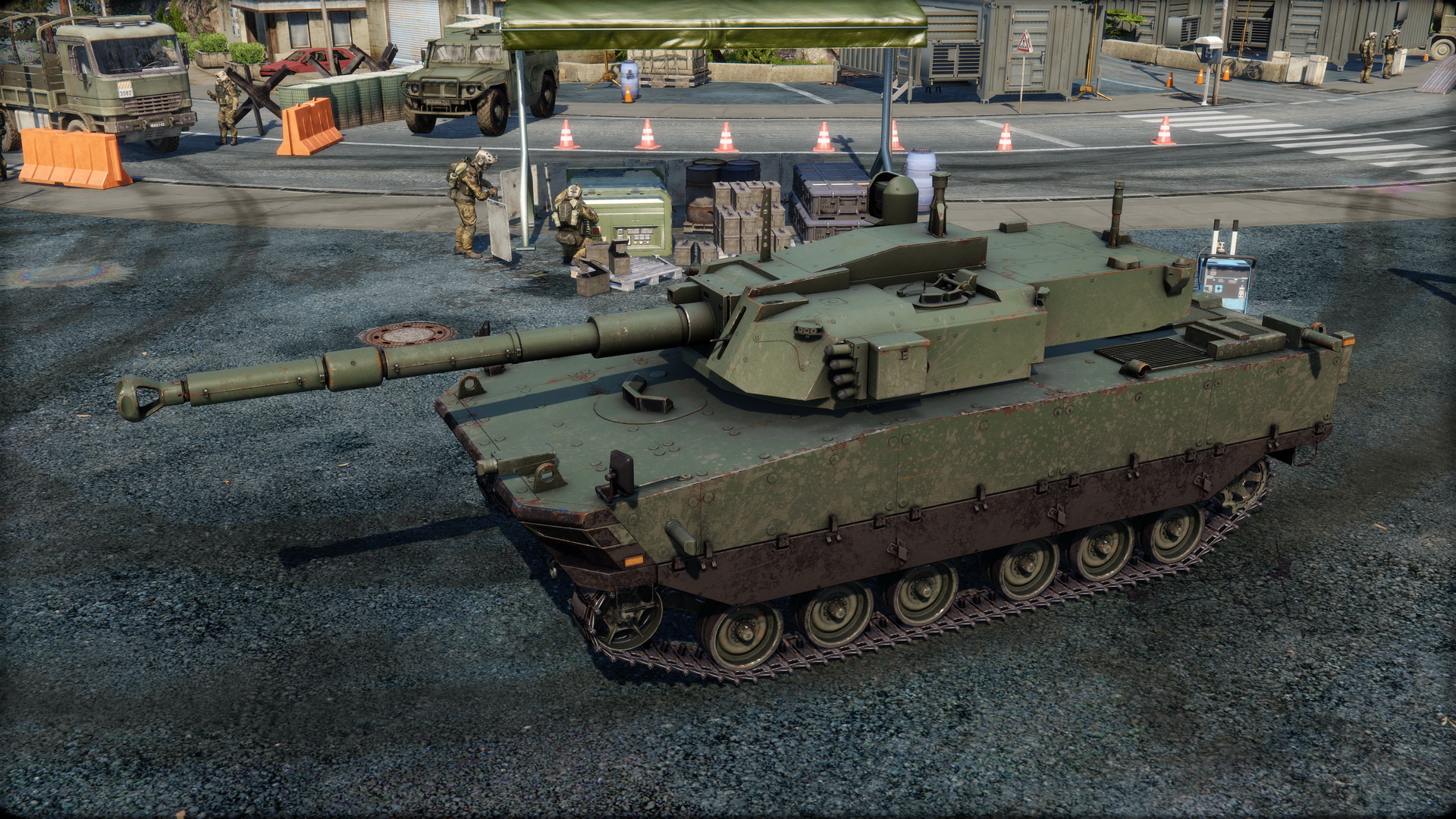 Where the Type 16 MCV fits the wheeled gun-armed Tank Destroyer archetype, the Harimau is the quintessential Light Tank. Fast, highly agile and powerfully armed, it will be perfectly suited for flanking combat and offensive gameplay style.

The protection will, of course, not be significant – its basic steel armor will repel autocannon rounds only, although it will have additional defense systems at its disposal:

All in all, the Harimau will still remain a relatively fragile vehicle and caution will be required when playing it. But no worries, things are only going to get better from now on.

The mobility of this vehicle will be solid. Its 32.5 tons will be moved around by a 520hp diesel engine, upgradeable to 711hp. The maximum speed with the upgraded engine will be 78 km/h. Additionally, the vehicle will feature hydraulic suspension.

But the true strength of this vehicle will lie in its firepower or, more specifically, in its ability to deal massive damage in a short period of time. Like a true tiger, it will pounce on its prey and defeat it with a flurry of mighty blows. 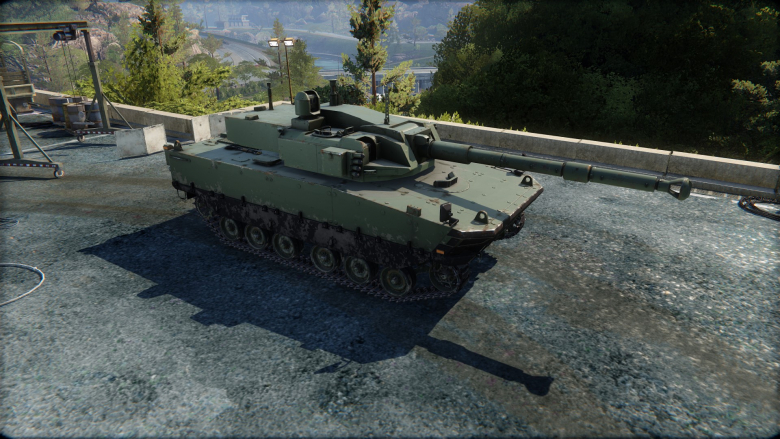 Let’s start with the gun – an automatically loaded 105mm Cockerill cannon in a CT-CV turret is nothing to laugh at with its -10 to +42 degrees gun depression and elevation values. Even in its basic form, it will feature a Ready Rack mechanism with four shells that will be possible to fire in relatively rapid succession (3 seconds between shots) and will fire either 315mm penetration HEP rounds or 530mm penetration APFSDS rounds. From there on, you will be able to unlock the following upgrades:

After these become unlocked, the final firepower choice will await you. You will get to choose between:

But that’s still not everything. In order to complement its intended playstyle, the Harimau will have two active abilities to choose from: 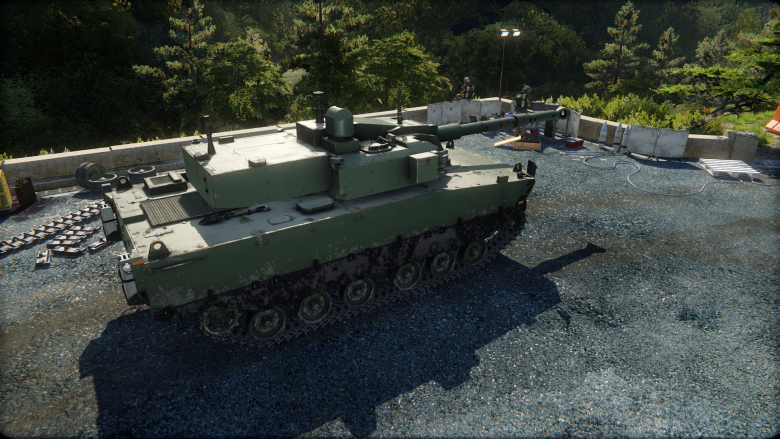 To sum it up, the correct strategy for this vehicle will be to stalk your target, wait for the right moment and maul it to death with several hard hits like the massive cat the tank is named after. Another, optional, gameplay style would be scouting combined with taking opportunity shots, but hard and fast close-range hits really are what the vehicle will excel in.