Before we unveil the rest of the progression branch for the Spirithaven season, let us make a short stop on Tier 8 and talk about the Premium vehicle that is going to be available for Gold in the vehicle pool of Francine De Laroche – the K21 Infantry Fighting Vehicle.

The K21 was developed as a replacement for the K200 series from the 1980s, which was deemed a bit too light for the 21st century battlefields and, of course, by the end of the 1990s, its age was starting to show. The development of its successor (back then referred to as K300 or NIFV – Next Infantry Fighting Vehicle) was launched by Doosan Defense Systems & Technology (military equipment branch of the massive Doosan conglomerate) in 1999 and the first prototype was built between 2003 and 2005.

The idea behind it was similar to the other modern IFVs – instead of relying on mobility alone, the military wanted something far better protected that could not only hold its own in a firefight, but also turn Russian IFVs such as the BMP-3 into scrap.

South Korea was, of course, very familiar with what the Russians could build. Three years prior to the launch of the development of the K300, it had received several dozen BMP-3 IFVs from Russia as a payment for a previously incurred debt along with some T-80U Main Battle Tanks. These are normally only associated with very few countries outside of Russia, but South Korea got its hands on them nevertheless. The Russian vehicles were subsequently carefully studied by both the Korean and American engineers, but that’s a story for another time.

Suffice to say that the capabilities of these machines were the impetus to Korean armor development along with the threat of North Korea as well as the emergence of China as a military superpower.

As is their nature, the Koreans were quite fast to develop a rather modern IFV that would protect its crew against Russian 30mm autocannons. The first three prototypes were tested between 2003 and 2005 and were subsequently accepted in service under the name K21.

The K21 IFV weighs some 25 tons, has a crew of 3 men (commander, gunner and driver) and can carry up to 9 troops with equipment. Its armor is made of military grade aluminum along with some fiberglass and ceramic composite elements. Its advanced layout allows for frontal protection against Russian 30mm 2A72 autocannon shells (including armor-piercing) although the side protection of the vehicle is lower and can withstand 14.5mm AP bullets only, which is still a substantial improvement over the small-arms-only all-round protection of the K200. The vehicle flanks can also withstand fragments of nearby (10m or further) 152mm shell explosions. 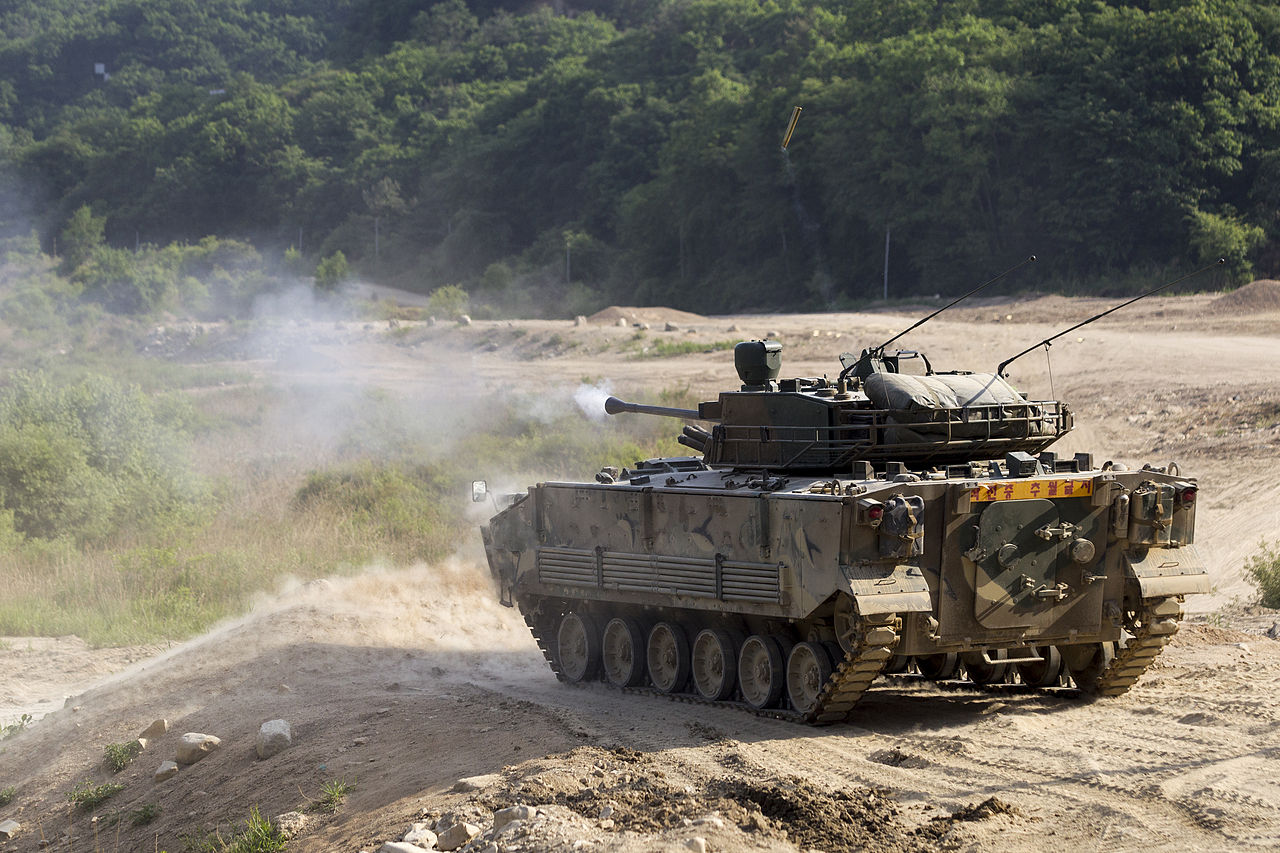 The vehicle carries a turret that’s armed with a Korean-developed K40 40mm automatic rifled cannon derived from the Swedish XK40 Bofors, capable of firing at 300 rounds per minute. It can fire several round types, including:

The ammunition is stored in a carousel below the gun. The gun itself can elevate to +45 degrees, depress to -7 degrees, is stabilized and also controlled by a truly advanced FCS. In addition to that, the crew has several high-tech tools at its disposal, including a battlefield management system.

And last but not least, there’s the matter of mobility. The K21 is powered by a 10-cylinder 740hp Doosan D2840LXE diesel engine (some sources state only 680hp). Its maximum speed is 70 km/h and it is worth noting that the vehicle is amphibious, but this feature requires the deployment of in-built flotation bags, which is, fortunately for the crew, automatic as well as very fast. With these deployed, the maximum swimming speed is approximately 7 km/h (the vehicle is powered by its tracks in water). 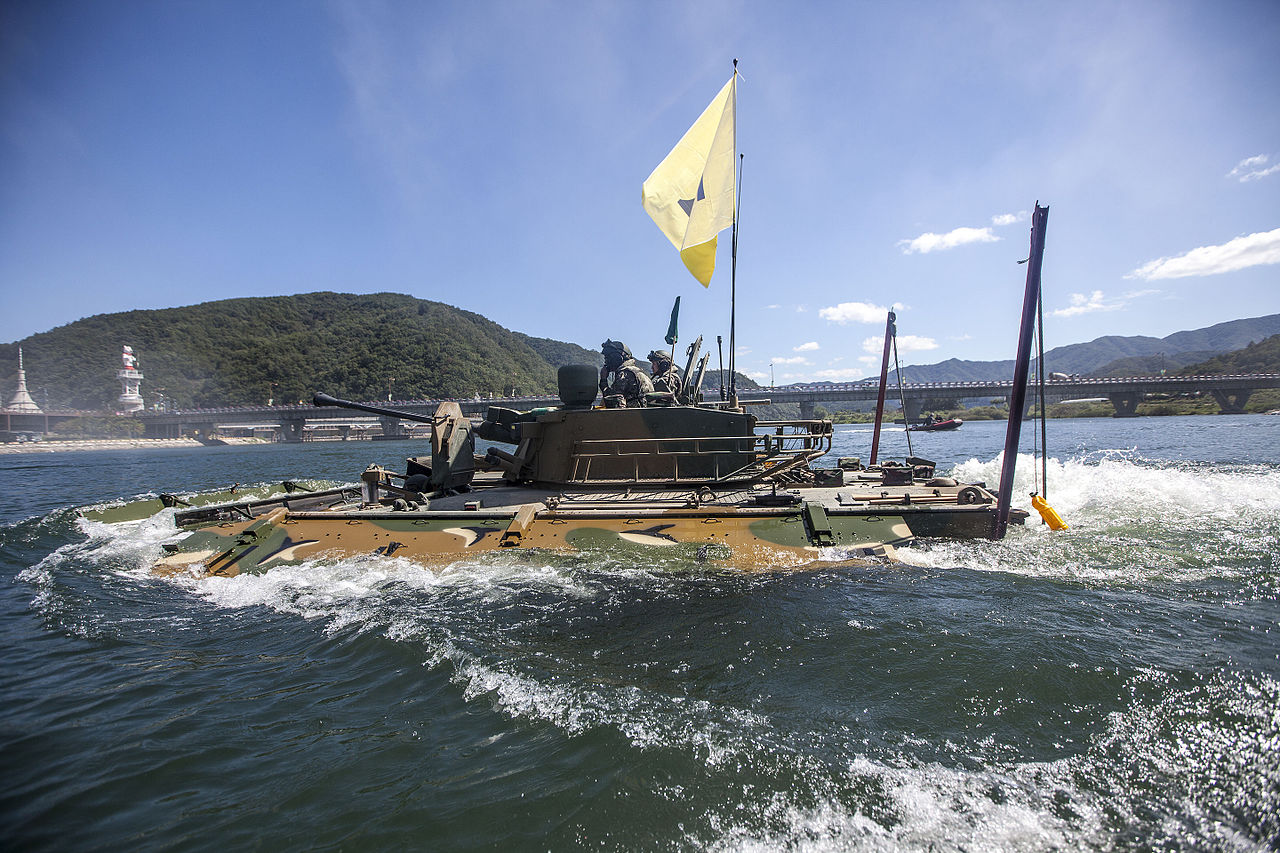 A PIP version (Product Improvement Program) is currently in development with a number of upgrades envisaged for it, including:

The Raybolt missiles feature tandem HEAT warheads and are launched upwards, descending upon the target from higher angles in order to hit vulnerable roof armor. Their flight velocity is 580 m/s and their range is 2.5km to 3km. According to some sources, they are capable of self-homing (fire and forget mode) and can penetrate 900mm or more of armor after defeating ERA.

Another potential upgrade unveiled to public would be the installation of 40mm CTA automatic cannon to the vehicle. However, apart from several renders, no other info is available.

Mass-production was launched by November 2009 and, due to a large volume contract, the price was very competitive. By 2015, the cost per was apparently one half of that of a Bradley Fighting Vehicle and 85 percent of its components were of domestic origin, a remarkable feat for South Korea. According to some sources, the production at ended by 2016 but it is currently unclear how many were built in total. The most common estimate is around 400 vehicles of the 900 originally intended serving alongside more than a thousand remaining and upgraded K200 IFVs.

One final interesting thing about this vehicle is its producer. Doosan DST was renamed in 2016 to Hanwha Defense Systems along with its partner company Hanwha Land Systems (responsible for some elements of the K2 Black Panther as well as for the K9 Thunder SPG), both belonging under another company, Hanwha Techwin. That is why different sources state different names. 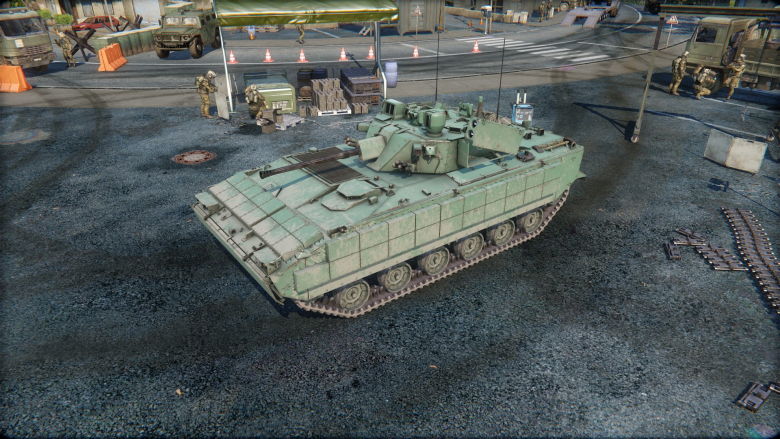 Like we mentioned above, the K21 will be implemented as a Tier 8 Premium AFV in Update 0.31 and it will be obtainable for Gold directly in the game. In the game, it will be an IFV with solid protection and firepower, but also (unlike the larger and heavier Marder 2) excellent mobility.

Let’s start with its armor. The K21 in the game will be available in the PIP (Product Improvement Program) configuration, which means it will feature an ERA kit as well as some additional modular plating, making it frontally resistant to pretty much all 30mm or smaller automatic cannons. The ERA itself will of course help against ATGMs, but the real protection versus those pesky launchers will consist of hard-kill KAPS APS.

But, of course, the vehicle will be vulnerable to anything heavier and, given its much lower weight compared to some other modern AFVs, it will also have relatively few hitpoints (only 2100 to be exact). But don’t worry, there are plenty of advantages to compensate this handicap.

Excellent mobility will be provided by its 840hp Doosan diesel engine and the vehicle will be quite agile as well as fast. With its sufficient maximum speed of 75 km/h, its operator will have an easy time catching up to any ongoing attempts to break through enemy lines and the 2 second acceleration from 0 to 32 km/h will surpass most other tracked AFVs around its Tier.

And, last but definitely not least, there’s the firepower aspect. The K21 AFV will be armed with one of the two weapon systems:

Players will get to choose which configuration to deploy and it will be possible to change it at any point outside of battle. Let’s take a look at both. 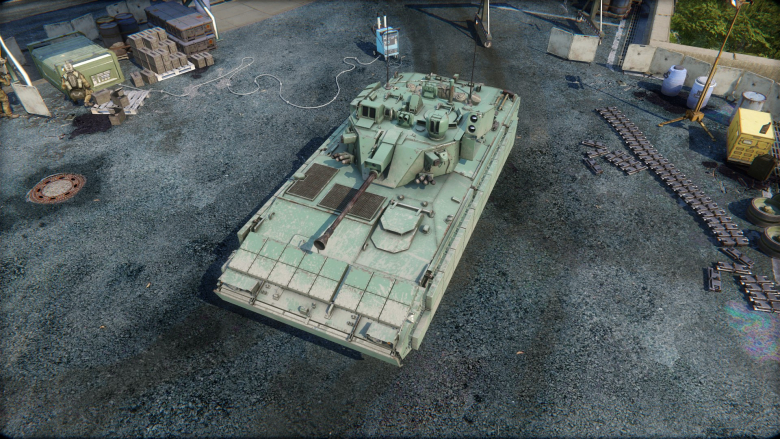 The K40 autocannon is the basic weapon system of the vehicle but in our PIP configuration, it was enhanced by a pair of Raybolt ATGM launchers. The cannon itself behaves pretty much like any other autocannon – it has a 24-round magazine and a high rate of fire (300 rounds per minute), which means the magazine is emptied rather fast. Fortunately, its reload is fairly fast (3.3 seconds). It fires the following rounds:

The gun has very decent elevation and depression levels (+45/-7) and is also fairly accurate. The true firepower, however, comes from a pair of Raybolt ATGM launchers strapped to the side of the turret. In the game, these ATGMs behave the same way as the American Javelin does – you need to lock your target by holding your right mouse button while aiming at it and, after that, the missiles fly high into the air and descend upon it from above while aiming automatically (no further guidance is required after the launch).

This, of course, means that they will hit the weakest part of the target’s armor (the roof), which is why they do not need a lot of penetration – a standard HEAT warhead doing 430 points of damage suffices to keep all but the most resilient enemies at bay. Two missiles can be launched in rapid succession (3 seconds between shots), followed by a longer reload period of both launchers (20s). 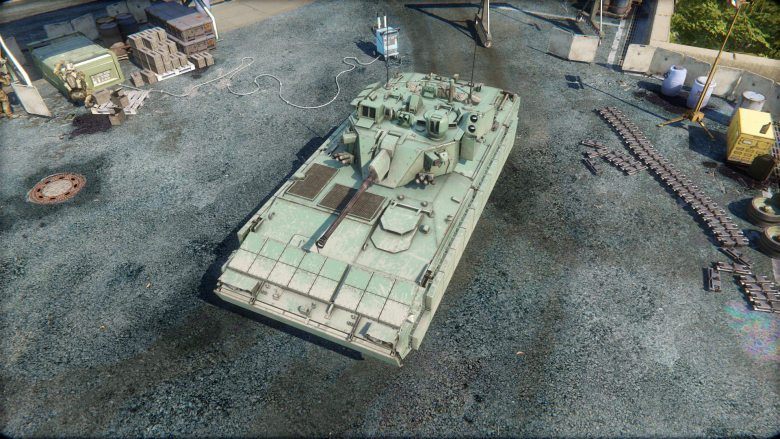 The second option is the 40mm CTAS autocannon. This gun will have the elevation values as the previous one, but the main difference is that unlike the K40, the CTAS will be belt-fed, which means no need to reload clips. You will simply be able to fire continuously (much like the Marder 2 already can) with the following shells being available:

On the other hand, the rate of fire will only be 200 rounds per minute. In other words, you will trade your rate of fire and a bit of extra penetration for the ability to fire continuously. The ATGM launcher will, however, behave the same as in the previous configuration.

Being an IFV, the K21 will, of course, be capable of deploying infantry and, since it’s smaller than the Marder, it will have slightly higher camouflage factor (32 percent), but also viewrange (440m). The Marder will, however, definitely have a serious advantage in hitpoints (2750 compared to K21’s 2100).

In summation, what we have here is basically a light tracked AFV with some considerable firepower but, at the same time, without the protection levels of many a heavier vehicle. This combination will require more careful gameplay, which will be made possible by its adequate camouflage factor and excellent mobility. Deploying infantry and supporting it from a nearby position does sound like a good strategy for this kind of vehicle, as does laying down continuous suppressing fire or flanking the enemy. 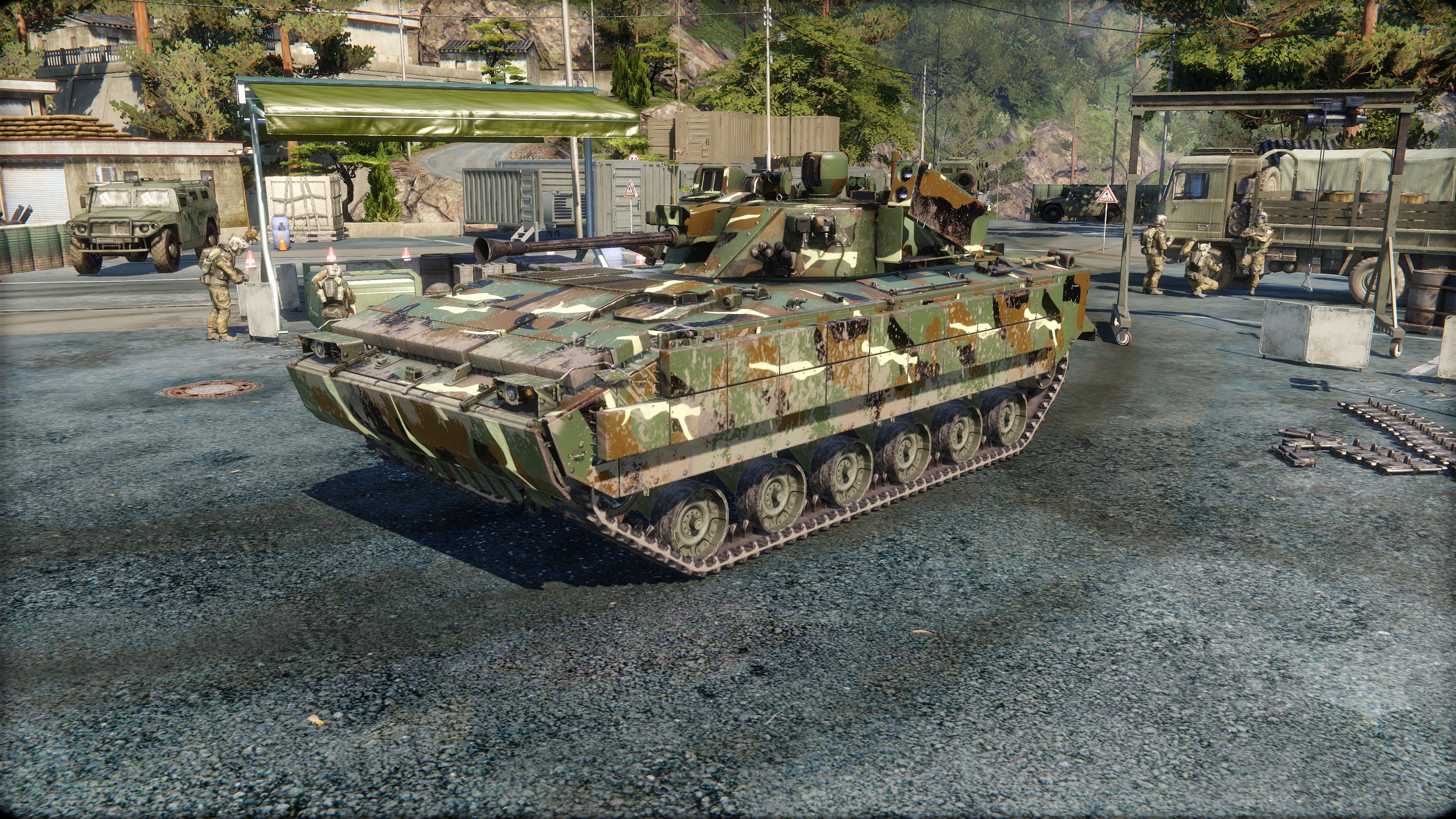 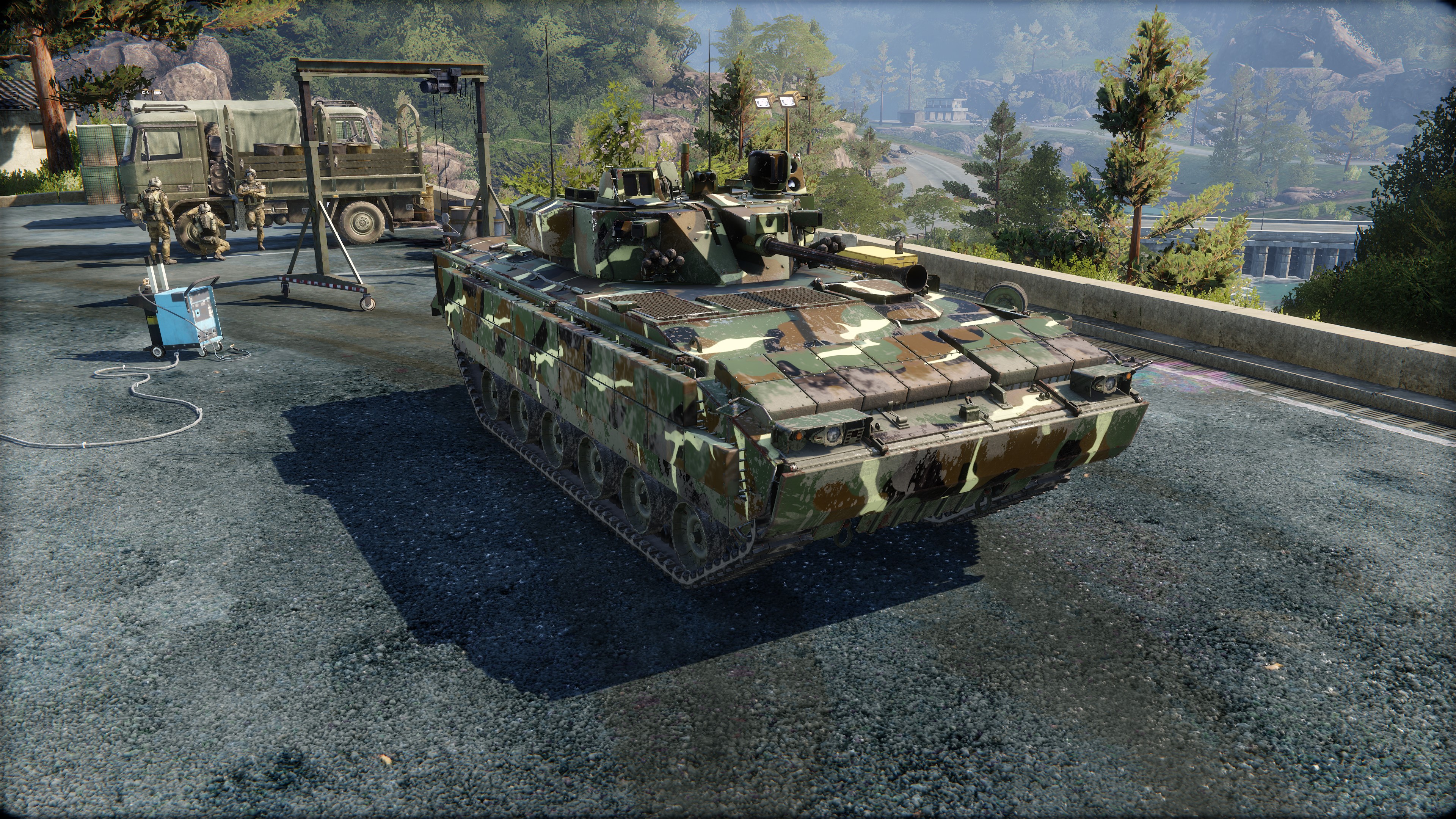 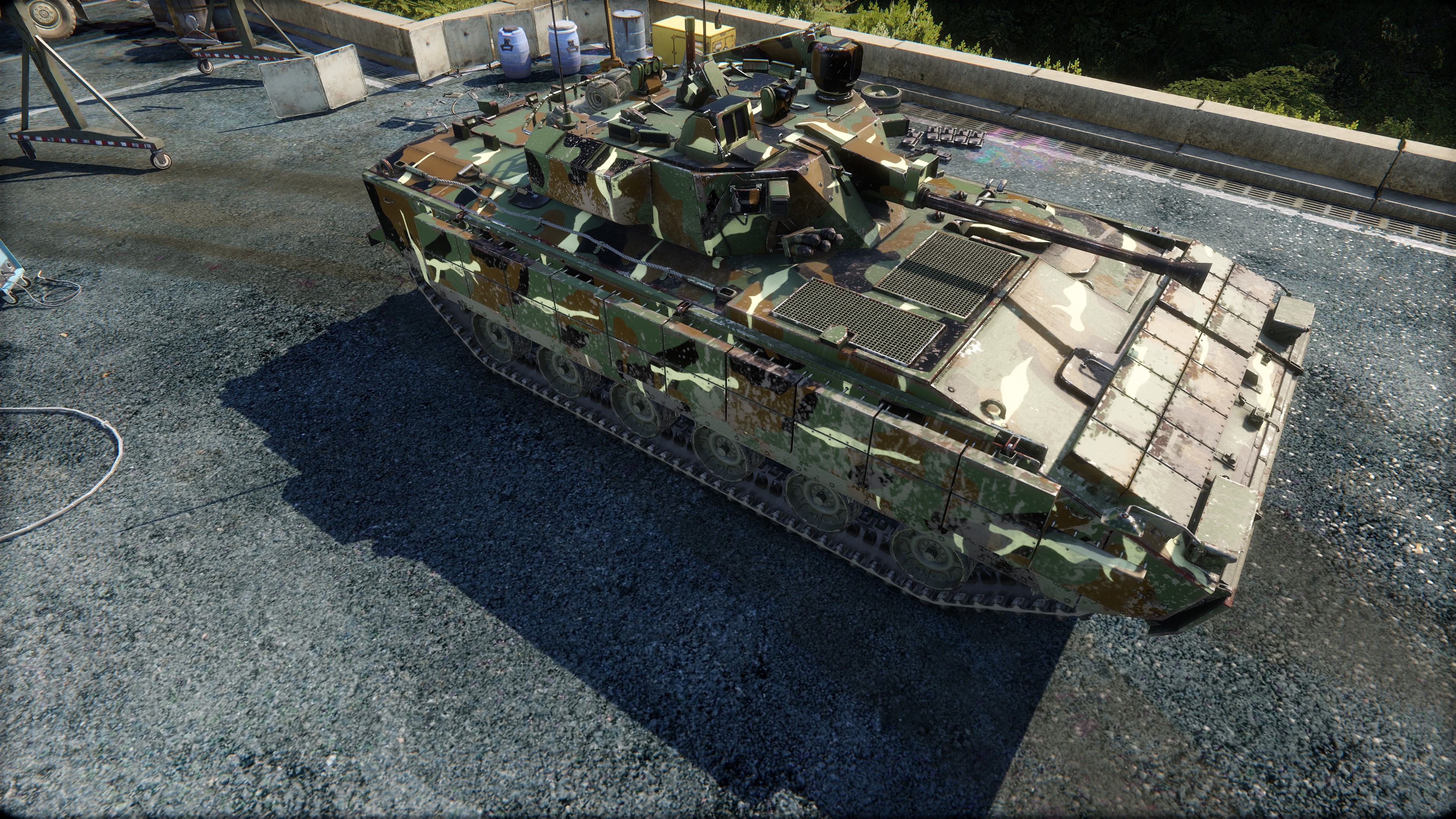