As you know, the first prize of the recently unveiled Northern Wind Battle Path will be the CV90105 TML Light Tank and today, we’d like to tell you more about it.

The CV90105 TML Light Tank consists of a CV90 hull by Hägglunds and the TML turret by a French company called GIAT. It was one of the first fire support variants of the CV90 platform and was developed as a private venture between the two companies with export in mind.

While the hull was relatively unmodified, the turret was the truly interesting part. The TML stands for Tourelle Modulaire Légère, or Light Modular Turret. It was a three-man turret, developed by GIAT as a private venture. The idea was to design a modern modular combat module that would fit a wide variety of platforms, including the French AMX-10 RC, the prototype VEXTRA IFV or the Piranha platform by MOWAG. The development of the turret ran from the early 1990s to roughly 1997 and several iterations were offered.

The turret was armed with a manually loaded 105mm GIAT CN 105 G2 rifled cannon with performance roughly similar to the Royal Ordnance L7. Unlike the L7, however, the gun was fitted with a muzzle brake and was stabilized by a Swiss Curtiss-Wright stabilizer. The gun could depress to -6 degrees and elevate to +18 degrees and could fire various GIAT rounds, including HE, HEAT and APFSDS. In total, the vehicle carried 40 rounds of ammunition with 12 of them stored in a ready rack in the back of the turret.

In its basic form, the optics of the turret were somewhat rudimentary. However, in 1997, the ultimate version of the turret appeared where the gunner could aim the gun by using the SAGEM SAVAN 15 optics fitted with a thermal imager. The commander had a panoramic sight and his own thermal imager at his disposal as a part of the VIGY 15 optics. Remarkably for its time, the system did offer the hunter-killer feature where, while the gunner was engaging the target marked by the commander, the commander was already looking for a new one.

Regardless of iteration, the turret protection was very light and steel-only, much like the CV90 hull, although an additional armor kit was available. Additional protection systems included:

The vehicle itself weighed roughly 22.5 to 25 tons (depending on armor configuration), had a crew of four (three men in the turret) with three to four troops carried in the back of the vehicle. The CV90105 TML was powered by a Scania DS14 550hp inline 6-cylinder diesel engine paired with a Perkins x300 transmission. The maximum speed was roughly 70 km/h.

A single prototype first appeared in 1994, but failed to get a lot of attention, mostly due to its glaring flaw – insufficient protection that could not match that of an MBT. At the time, while expensive to operate, MBTs could be obtained on the cheap as the entire world was implementing budget cuts and Russia was offering entire tank divisions wholesale. The world was still firmly set in the Cold War tank use mindset and nobody could imagine how the September 11 attacks would change the nature of warfare only a few years later.

Nevertheless, the lessons learned in the development and marketing of the CV90105 TML would lead to the appearance of the CV90120 Light Tank in 1998 as well as another CV90105 iteration, this time fitted with a Cockerill turret. The TML variant itself would be offered until roughly 2001-2002, at which point it was phased out.

In Armored Warfare, the CV90105 TML will be a Tier 7 Premium Light Tank. But before we tell you more about it, please note:

Here’s the deal about Vikings (at least in the movies) – they are wild warriors who fight half-naked, rushing into the enemy head-first and dealing tremendous damage with their battleaxes before retreating back to the cover of their Drakkars (with enough loot to last a year, of course).

The CV90105 TML will kind of be like that, a vehicle meant for aggressive and fast hit and run tactics, or for careful support from cover. 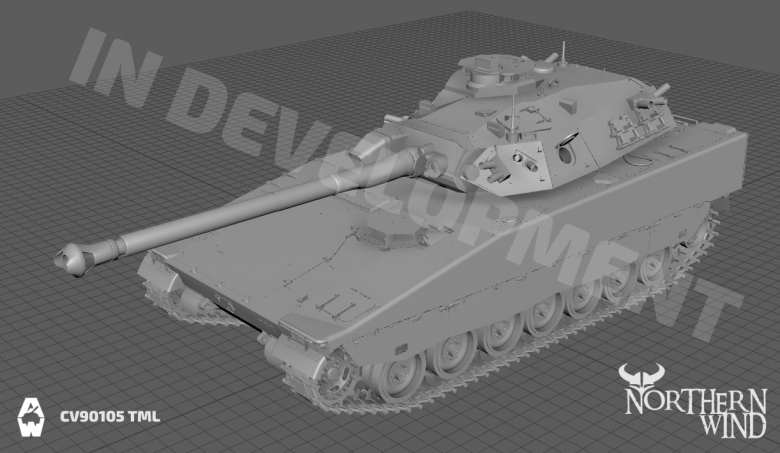 Its powerful 105mm gun will be fitted with a 12-round clip autoloader (the largest clip in the game), allowing you to fire one round per 2.5 seconds. Since the gun will be firing APFSDS (620mm penetration, 400 damage per shot) and HEAT rounds, it will reach a decent-enough damage-per-minute value of 5284 units. Once empty, the clip will take 30 seconds to reload (upgradable to 27 seconds with an additional module). The gun depression and elevation will be comfortable as well (-7/+19 degrees).

However, unlocking an additional progression firepower upgrade (available for completing Battle Path missions and challenges) is where things will start to get really fun for players who like swift and hard attacks. With the abovementioned module, the magazine size will be reduced to 5, the time between shots will be reduced to 1.3 seconds and the clip reload time will be reduced to 18 seconds. In other words, with this module unlocked, the CV90105 TML will be able to dish out enormous damage in a short span of time (although not enough to take down an MBT with a full set of hitpoints).

Combine that with decent mobility roughly comparable to the Stingray Light Tank (70 km/h maximum speed, 0-32 km/h in 3.3s), good vision range and stealth and you have one of the most potent hit-and-run vehicles in the game. It’s also worth noting that you’ll have three Active Abilities to choose from – Retreat, Rapid Fire and Zero In.

There will, however, be a major downside to all that firepower. The steel-only hide of this vehicle will barely protect it against light autocannons and trading damage with anything heavier will result in your swift and explosive demise.

As a result, this vehicle will offer two different playstyles, depending on your module choices. You can opt for a more sustained firepower with the large 12-round clip – this way you need to stay behind your own team or hide in bushes, turning your Light Tank into something like a close support Tank Destroyer. Or, you can opt for the fun option of turning your CV90105 TML into a hit and run monster. Ambush an enemy, empty the magazine into his sides or rear and immediately retreat. Regardless of your choice, getting caught in the open is definitely not advised.