Welcome to the twentieth issue of the Developer Digest series. Here you can find out more about game development straight from the developers and producers of Armored Warfare! 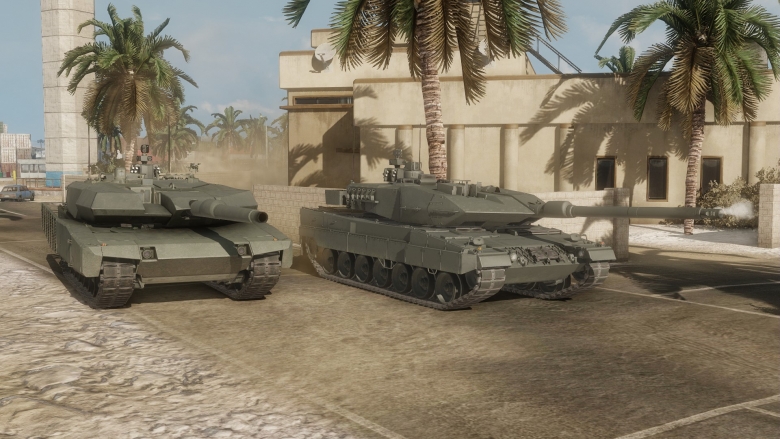 How and when are you going to attract new players?
With the arrival of Balance 2.0, we will gather feedback and possibly make some necessary adjustments before launching a wide marketing campaign. We will also attract players from other tank games with unique and exciting gameplay featuring elements that can't be found anywhere else but on a modern battlefield.

How do the developers want to ensure that each class is unique and played with differently than others? So far, the changes in Balance 2.0 strive for a situation where TD, LT and AFV will have a very similar role on the battlefield.
In Balance 2.0, each class will have its unique role, moreover, some classes will be divided into sub groups, each with its own task. Tracked tank destroyers, for example, will be akin to what you know from other tank games, while wheeled tank destroyers will be closer to light tanks – mobile, flanking snipers. Light tanks will also be very mobile and accurate on the move, but at shorter distances. AFVs will be separated into heavy (such as IFVs), which are firepower oriented, and light, which will be purebred scouts. The matchmaker will take the new roles into account.

Last year, we saw an article about Polish vehicles that would appear in Armored Warfare, is that still valid?
Polish vehicles will appear in the near future. They were even described in our In Development series.

Will Leopard 2PL or PT-16 appear in AW?
Eventually – we would like to have all tanks in the game! Not in the near future though.

Does that mean that the Lords of War were pushed for after the introduction of Balance 2.0?
No, it just means we aren't talking about it until after Balance 2.0 is released. It could easily come with Balance 2.0 and be activated later on.

How long will players have to wait for another Global Operations map?
A new Global Operations map will appear in Update 0.19 with another map hopefully coming in 0.20. The Update 0.19 map will be even larger and designed from the ground up to support GLOPS - Desert Crossing was converted early in development. Past that, we are looking to convert some of our other large maps like Frontline into a Global Operations map also. Converting maps will probably take a lot less developer time than making one from scratch. As a result, you will continue to see more maps added at a fairly consistent rate on top of traditional maps.

Will the Desert Crossing and other GLOPS maps be available in standard PvP?
Yes, we always planned on those maps being available as normal maps at some point too.

Will you add the option to change the default folder for recorded replays? I have a small SSD and a large HDD, I would like to keep these materials on HDD.
That's a cool suggestion, we'll look into it!

Which AMX-13 will be the Tier 1 vehicle – the 75mm variant, or the 90mm variant?
The setup of the line has not been finalized yet.

Will Chinese Tier 9 and 10 tanks be added after, or along with Polish vehicles?
Either around the same time or afterwards, but relatively soon. We don't, however, have a specific ETA.

Can players with poor hardware expect better optimization in the near future?
With the introduction of the simplified render feature, update 0.18 brought a large improvement in low-end PC performance. At this moment, we have solved all the "big" things. Further optimizations will come, but only in smaller chunks.

Do the developers have a backup plan if Balance 2.0 doesn't work? Many players are currently skeptical about the upcoming changes.
While some partial details were revealed, players cannot yet have a clear picture of what Balance 2.0 is. There will certainly be some who will not like it, but ultimately we believe that it will be a success and will draw in a large amount of players.

Will players have the opportunity to acquire Object 155?
No. Another fate awaits that vehicle.

Do you plan to advertise the game using large YouTubers?
We are partially doing that already, but larger pushes will only happen after Balance 2.0 is introduced.

Are you planning to add more camouflage patterns? The current amount of patterns and customization options is very small.
Yes. We are also working on a brand new skin system. Unfortunately, we can't disclose any more details at the moment.

Are there plans to add new commanders to the game? If so, when can we expect this?
Yes, after a crew/commander system overhaul, which will form part of Balance 2.0. We do not currently have a specific ETA to give you.

Will Matchmaker in PvE mode be converted in such a way as to ensure a balanced team composition?
Yes, that's one of the main goals of Balance 2.0. The matchmaker mechanism will be overhauled to work with the new rules, including vehicle roles.

I feel that the Pillboxes in Global Operations are too strong, someone deploys them and they start firing immediately!
Pillboxes have a short activation period before they begin firing after spawning. They also can be outranged and have limited firing arcs. You can see their blind spots by looking for the areas on them without windows.

AI opponents in PvE and Global Operations are cheating, they always aim for weakspots!
In Update 0.18, AI got better at targeting other weak areas on your vehicle other than just shooting at the center mass. Overall though, we are making more improvements to AI logic (not giving it cheats) so it can fire ATGMs and in general behave more appropriately. Making AI improvements will continue to be an iterative process post balance 2.0.

AI not shooting at center mass as much doesn't constitute cheating. If anything, AI opponents now behave more like players do and seek out weaker areas on vehicles. With the damage/armor/hp re-balance happening in B2.0, you will see numbers and behavior tweaked further. Updated armor meshes combined with re-balanced penetration figures means no artificial weakpoints. If the AI penetrates you post-Balance 2.0 it's because they hit a segment of weak armor, not because they hit a pre-designated weakpoint.

I play a fair amount of PvE (primarily as an MBT) and find the AI hits the weakpoints a decent amount of times, but nothing I personally would consider anywhere near 100 percent perfect accuracy. Given the fact that you face way more vehicles in PvE than in PvP in just one match, it's understandable that your statistical chance to be penetrated would be higher overall.

But what about AI opponents using guided missiles?
Initial ATGM implementation will be dumbfire, so AI won't be adjusting their flight path while in flight.

Will Balance 2.0 make tanks over various tiers equal in performance by equalizing their hitpoints and other properties?
No. Higher tiered vehicles will have better armor values and modifiers and will require higher penetration values to damage. A lower tier vehicle will still be able to deal damage to it, but only when shooting at the thinner armored sections.

Will there be many armor changes in Balance 2.0?
Balance 2.0 does come with reworked armor models that have 2.5x higher fidelity and remove artificial weakpoints.

But what about the announced wider Tier spread?
We are not forcing players to play with +3/-3 Matchmaking. We are just saying that if you run into Tier 6 as a Tier 4 player, it will be a better experience overall from what you see today. In fact, it will be a drastically different experience, one in which you will not be made immediately irrelevant in. Whenever possible, the Matchmaker will still try to place players of the same tier in a match together like it does now. It will just be a better gameplay experience should it need to expand its search parameters.

A summary of information about the future of Armored Warfare straight from the developers, this time with the answers about Update 0.17, Global Operations and the upcoming Balance 2.0 changes