The M113 Armored Personnel Carrier is one of the most common western vehicles of its class. Employed by around four dozen militaries all over the world, it has served more than fifty years with distinction. A large number of variants have been built over the years and the vehicle has participated in numerous conflicts. 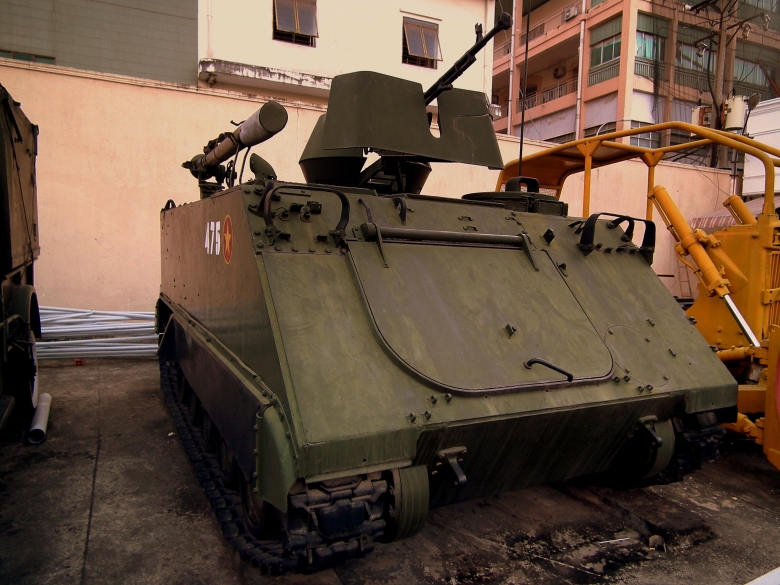 M113 ACAV in the Vietnam War Museum in Saigon

Perhaps the best-known war the M113 was used in was the Vietnam War. It was deployed in large numbers and its boxy shape became one of the symbols of this brutal conflict. However, despite its ubiquity, the M113 was ill-suited for the kind of jungle and urban environment warfare this war was known for. Its aluminum armor was not able to withstand a lot of firepower – even heavy machinegun bullets were able to penetrate it and wound or kill the troops inside. But even worse, attempting to use the vehicle's weaponry – the pintle-mounted 0.50cal Browning M2 heavy machinegun – left gunners dangerously exposed because in its original form the gun lacked any type of gun shield.

The resourceful South-Vietnamese and U.S. troops found a number of ways to improve the situation and produced some modified variants, one of which was known as the M113 ACAV. 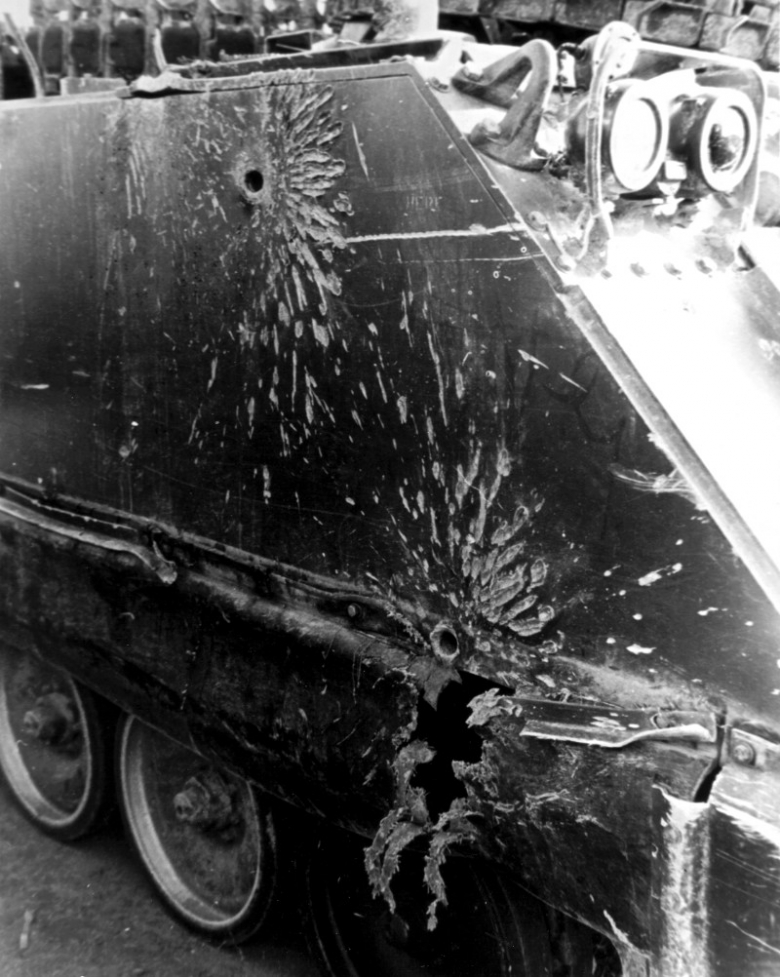 ACAV stands for Armored Cavalry Assault Vehicle, signifying a switch from the traditional U.S. APC battle taxi role to something resembling an Infantry Fighting Vehicle doctrine. The M113 would no longer be used to just transport troops around and bail out once the fighting got thick, but to accompany the infantry into battle and actively support them with the fire of its weapons.

The first ACAV vehicles were actually not designed by the Americans, but by their South-Vietnamese allies, who actively used the M113 in battle. To solve the vehicle commander's exposure issue, a .50cal (12.7mm) machinegun was fitted with various heavy shields. Additional light machineguns (7.62mm M60) were often mounted on the aft of the vehicle. The armor (especially the belly to protect the crew and passengers from mine explosions) was also sometimes enhanced by installing additional steel plates on the vehicle. These were not always armor steel plates, anything suitable would do.

The first Vietnamese ACAVs appeared around 1963. They were not standardized at this point with each unit using whatever resources they could find, cutting the gun shield from wrecks of other armored vehicles. This modification turned out to be a success and many, if not all, Vietnamese M113s were improved this way. The survival rates of the M113 crews increased considerably, although the vehicle became somewhat heavier, which affected its off-road properties. 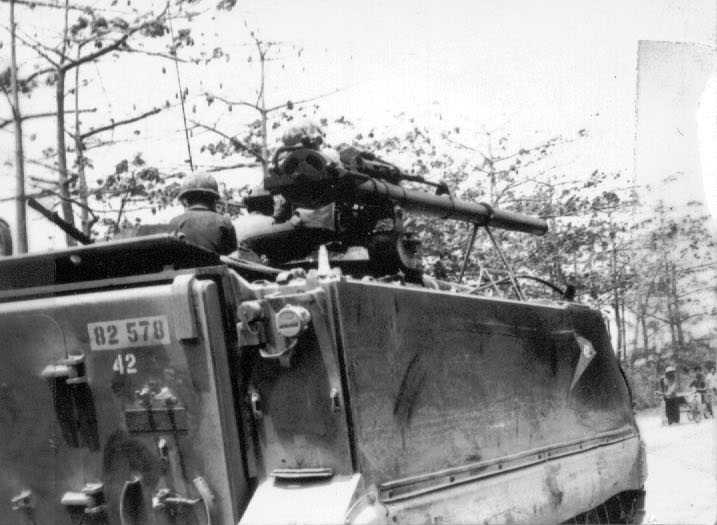 The Americans also adopted the gun shield idea and by 1965 production of an ACAV kit (suitable for all M113 variants, though the majority were applied to the M113A1 variant) was underway in the United States and Okinawa. These kits were then installed by the troops in the field, although in some later cases ACAV kits were installed on M113 vehicles that were still located in the United States. The first time the ACAV variant was used in large numbers was Operation Cedar Falls in January 1967, during which it was used by 11th Armored Cavalry. Many were afterwards used as convoy escorts.

While the entire program was a success, there were still some situations when an extra kick was needed. The thing about the Vietnam War was that there weren't all that many tanks around. While the wars of the same era fought in the Middle East featured tank and IFV numbers unseen since the Second World War, the jungles of Vietnam were not suitable for mass tank deployment.

However, there were times when tank firepower would have come in handy, which is why some ACAV vehicles were fitted with a 106mm M40 Recoilless Rifle. 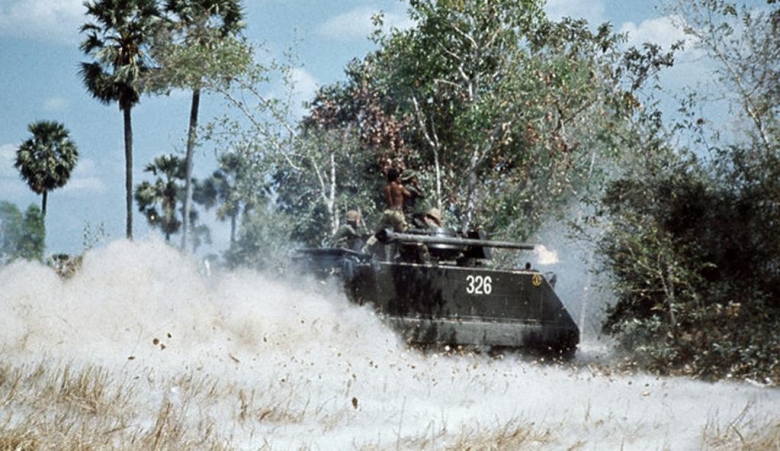 The M40, much like other weapons of its class, was developed in the early 1950s based on the Second World War experience to give infantry units a means to defeat enemy armor and fortifications while keeping the weight of the weapon to a minimum. Recoilless rifles are much lighter, mobile and easier to use than classic anti-tank guns or light field guns, but they do have their drawbacks – their range is limited, the muzzle velocity is low and they are unable to fire armor-piercing ammunition, relying instead on HEAT shells to defeat enemy armor. A massive blast and subsequent dust cloud (in dry environments) also reliably indicates their position to the enemy with its first shot, forcing crews to relocate to avoid counter-fire.

The M40 was first used in the Korean War, where it was able to successfully defeat the armor of North Korean T-34 tanks. Much like the M113, it remained in service for many decades and found its way to dozens of militaries all around the world, some of which still use it to this day – in recent years for example, its Iranian copy (which is still being manufactured) appeared in Syria and Libya on all sides of the conflict.

The M40 is capable of firing primarily HEAT and HE ammunition, although specialized rounds (such as a flechette shell) exist as well. The muzzle velocity is around 500 m/s and the maximum effective range for the HEAT shells is approximately 1.3 to 2km. It's worth noting that the original Vietnam-era HEAT shells were less effective than their modern counterparts – while some shells can penetrate up to 700mm of armor, the Vietnam-era round only penetrated approximately 400mm.

On the ACAV, the M40 was mounted on the rear side of the vehicle. The crewman assigned to it had to expose himself to operate it, but the weapon was still very useful in areas where tanks could not be deployed. Its main task was not to knock out enemy tanks – North Vietnamese tanks weren't as common – but to get rid of various fortifications and barricades. In this, the M40 excelled.

There were several mount variants of the M40 ACAV, but most disappeared with the end of the Vietnam War. Some were given to the Cambodian Khmer forces. Hundreds of M113s ended up in North Vietnamese hands, many of which were of the ACAV variant. Exactly how many vehicles were equipped with recoilless rifles is unknown, perhaps several dozen.

In Armored Warfare, the original Tier 1 M113 will be replaced with the M48, but the chassis will continue to be available, albeit in this different form. More information will be revealed soon!