Update 0.22 brought a number of interesting features, including an update to the way Ammo Rack explosions and fires work. In today’s Developer Diary, we’ll take a closer look at the mechanism. 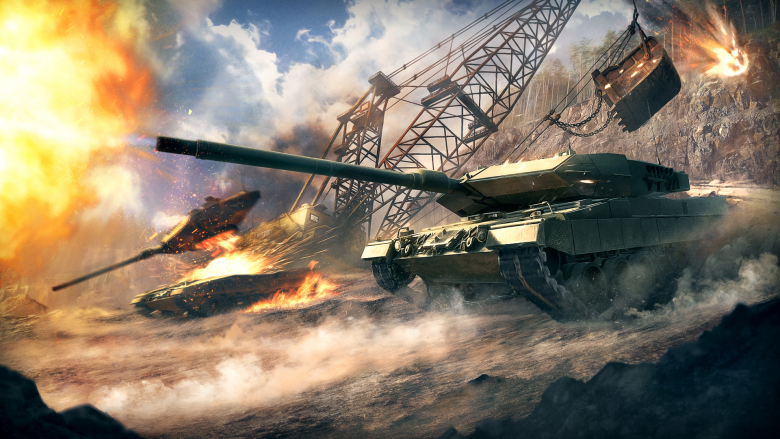 An ammo rack is the part of your vehicle where your ammunition is stored. Hitting it causes, just like in real life, a fire that can potentially destroy your vehicle, making ammo racks essential to protect. In the past – especially during the Second World War, but also during the decades that followed, ammo rack explosions often resulted in a quick and violent death. Tank battles in popular culture and on war photos often show tanks with ripped-off turrets – those are the results of ammunition explosions.

A number of ways was devised to give vehicle crews a chance to bail out in case of internal fire, from wet stowage (slowing the burn and giving the crew the time it needs to get out of the vehicle) to separate ammunition compartments.

Modern ammo racks are usually protected by several means – either by hiding them in the most armored parts of the vehicle, or by removing them from the inhabited parts of vehicles together, for example to turret bustle. Bustle ammo racks, while not as well protected as those located in the main hull behind thick slabs of armor, have other defensive measures in place, such as the blow-out panels. The principle is rather simple – in case of catastrophic ammunition explosion, the turret features thin panels on top that get (as their name suggests) blown out, directing the blast outside rather than inside the crew compartment.

To model these situations better and to introduce more gameplay diversity, we’ve decided to introduce the following changes to the ammo rack mechanism. Before Update 0.22, ammo rack damage could lead to devastating internal fires. Here’s how it works in Update 0.22.

If an ammo rack is destroyed, it starts a destructive fire. The fire causes damage worth 7.5% of vehicle’s maximum hitpoints each 1.5 seconds, but in addition to that, there’s a chance for the ammo rack to detonate, causing massive damage to the vehicle. Additionally, vehicle with damaged ammo rack has a 15% penalty to reload time.

There are now generally three types of ammo racks.

First are standard ammunition racks without any specific protection. These are present on most vehicles, practically on all non-MBTs and most MBTs, especially the older ones. In such vehicles, the ammunition is stored in various ways, but without specific advanced anti-detonation measures. These ammo racks have the following properties:

Second are ammunition racks with blow-out panels. As described above, modern Main Battle Tanks have ammunition stored in separate compartments with blow-out panels directing the explosion outward. The best known tanks with this feature are the Abrams MBTs, but there are more vehicles with extra anti-explosion measures. In the game, apart from the Abrams series, these include the following vehicles: T-14 Armata, T-90MS, Leopard 2 turret ammo stowage, WPB Anders, PL-01 and B1 DRACO. The properties are as follows:

The third type is rare and is currently restricted only to the Challenger tanks (with more advanced tanks such as the Merkava 4 planned for the future). These advanced ammo racks consist of special fire-resistant containers filled with fire retardant gel or other compound acting as an extinguisher in case of fire. Additionally, the ammunition bins are armored. In Armored Warfare, it works as such:

Some vehicles are more susceptible to ammunition rack damage than others due to their ammunition placing (which reflects their real life positions). Fortunately, there are several options available in the game to mitigate the issue:

By introducing these changes, we’d like for the ammo rack protection to matter more and to introduce a serious player choice for each vehicle. Getting to know your vehicle’s vulnerabilities will play a major role in the future as we introduce more diversity, making each vehicle truly unique.

Stay tuned and we’ll see you on the battlefield!

Learn more about the Spotting System updates that are coming soon

Learn more about the Update 0.22 changes to the commander system, how to use them to your advantage and how the commander progression and configuration work